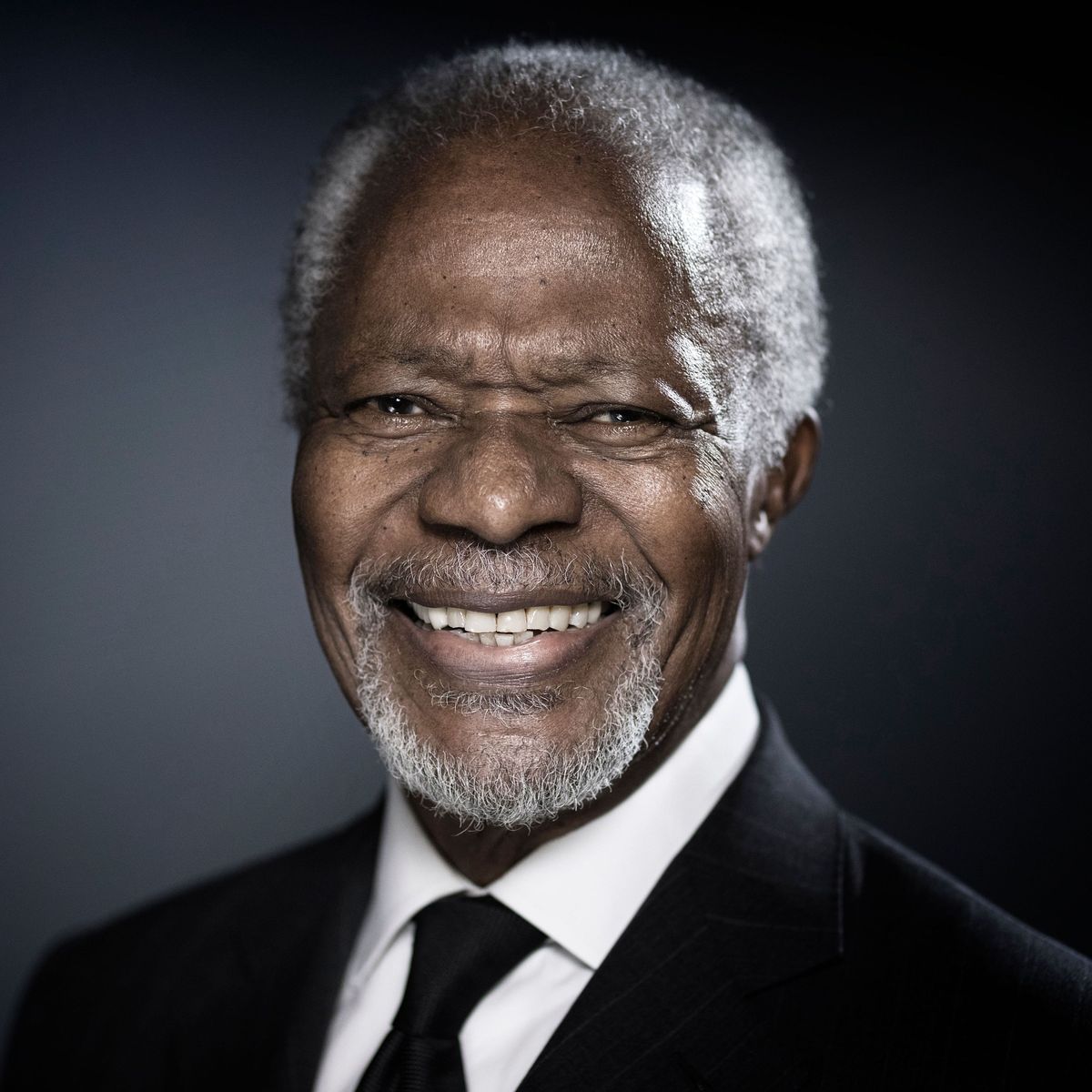 Who Was Kofi Annan?

Kofi Annan was born into an aristocratic family in Ghana and he attended a number of schools and colleges, studying international relations in the United States and Switzerland. He became an international civil servant working for the United Nations in 1962. He went on to become the U.N. secretary-general and later a special envoy to Syria. Annan died on August 18, 2018 in Switzerland at the age of 80.

Former United Nations Secretary-General Kofi Atta Annan was born within minutes of his twin sister, Efua Atta, on April 8, 1938, in Kumasi, Ghana. The grandchild and nephew of three tribal chiefs, Annan was raised in one of Ghana's aristocratic families.

In his mid-teens, Annan attended an elite Methodist boarding school called Mfantsipim, where he learned that "suffering anywhere concerns people everywhere." Upon Annan's graduation from the school in 1957, Ghana gained independence from Britain; it was the first British African colony to do so. "It was an exciting period," Annan once told The New York Times. "People of my generation, having seen the changes that took place in Ghana, grew up thinking all was possible."

Annan went on to pursue higher education, attending four different colleges: Kumasi College of Science and Technology, now the Kwame Nkrumah University of Science and Technology; Macalester College in St. Paul, Minnesota; Graduate Institute of International Studies in Geneva, Switzerland; and the MIT Sloan School of Management in Cambridge, Massachusetts. He earned a number of degrees, including a Master of Science, and studied international relations. Annan, whose native language is Akan, also became fluent in English, French, some Kru languages and other African languages.

Career with the United Nations

Annan's career with the United Nations began in 1962, when he got a job working as a budget officer for the World Health Organization, a U.N. agency. Annan has been an international civil servant ever since, with the exception of a short break from 1974 to 1976, when he worked as the director of tourism in Ghana.

For a nine-year period from 1987 to 1996, Annan was appointed to serve as an assistant secretary-general in three consecutive positions: Human Resources, Management and Security Coordinator; Program Planning, Budget and Finance, and Controller; and Peacekeeping Operations. While he served in that last capacity, the Rwandan genocide took place. Canadian ex-General Roméo Dallaire, who has been the force commander of the United Nations Assistance Mission for Rwanda, accused Annan of being overly passive in his responses to the 1994 genocide. Some 10 years after the genocide, in which more than 800,000 people were killed, Annan admitted that he "could and should have done more to sound the alarm and rally support," according to a March 2004 BBC article.

Annan served as under-secretary-general from March 1994 to October 1995. He resumed the position in 1996 after a five-month appointment to serve as a special representative of the secretary-general to the former Yugoslavia.

The United Nations Security Council recommended Annan to replace the previous secretary-general, Dr. Boutros Boutros-Ghali of Egypt, in later 1996. The General Assembly voted in his favor, and he began his first term as secretary-general on January 1, 1997.

Among Annan's most well-known accomplishments were his issuance of a five-point Call to Action in April 2001 to address the HIV/AIDS pandemic and his proposal to create a Global AIDS and Health Fund. He and the United Nations were jointly awarded the Nobel Peace Prize in December of 2001 "for their work for a better organized and more peaceful world."

Annan is also known for his opposition to the 2003 invasion of Iraq and to Iran's nuclear program. He told the BBC in September 2004 that the Iraq war did not conform to the U.N. charter and was illegal.

Life After the United Nations

Annan retired on December 31, 2006. Several months prior, he gave a farewell speech to world leaders at U.N. headquarters in New York, outlining major problems with an unjust world economy and widespread contempt for human rights.

Following his retirement, Annan returned to Ghana. He became involved with a number of organizations with a global focus. He was chosen to lead the formation of the Alliance for a Green Revolution in Africa, became a member of the Global Elders and was appointed president of the Global Humanitarian Forum in Geneva. In 2009, Annan joined a Columbia University program at the university’s School of International and Public Affairs.

In February 2012, Annan was appointed as the U.N.-Arab League envoy to Syria in an attempt to end the civil war taking place there. He developed a six-point plan for peace. He resigned from the position, citing intransigence of both the Syrian government and the rebels, as well as the Security Council's failure to create a peaceful resolution.

"As an envoy, I can't want peace more than the protagonists, more than the Security Council or the international community, for that matter," Annan said in a resignation speech on August 2, 2012.

"I had expected to go into Ghanaian politics," Annan once told Saga magazine, "retire to a farm at 60 and die in my bed at 80. It did not happen so. It's one of the things God does."

Annan passed away after a short illness in a hospital in Bern, Switzerland, on August 18, 2018. His wife Nane and children Ama, Kojo and Nina were by his side. "Kofi Annan was a global statesman and a deeply committed internationalist who fought throughout his life for a fairer and more peaceful world. During his distinguished career and leadership of the United Nations he was an ardent champion of peace, sustainable development, human rights and the rule of law," the Kofi Annan Foundation and Annan family said in a statement.