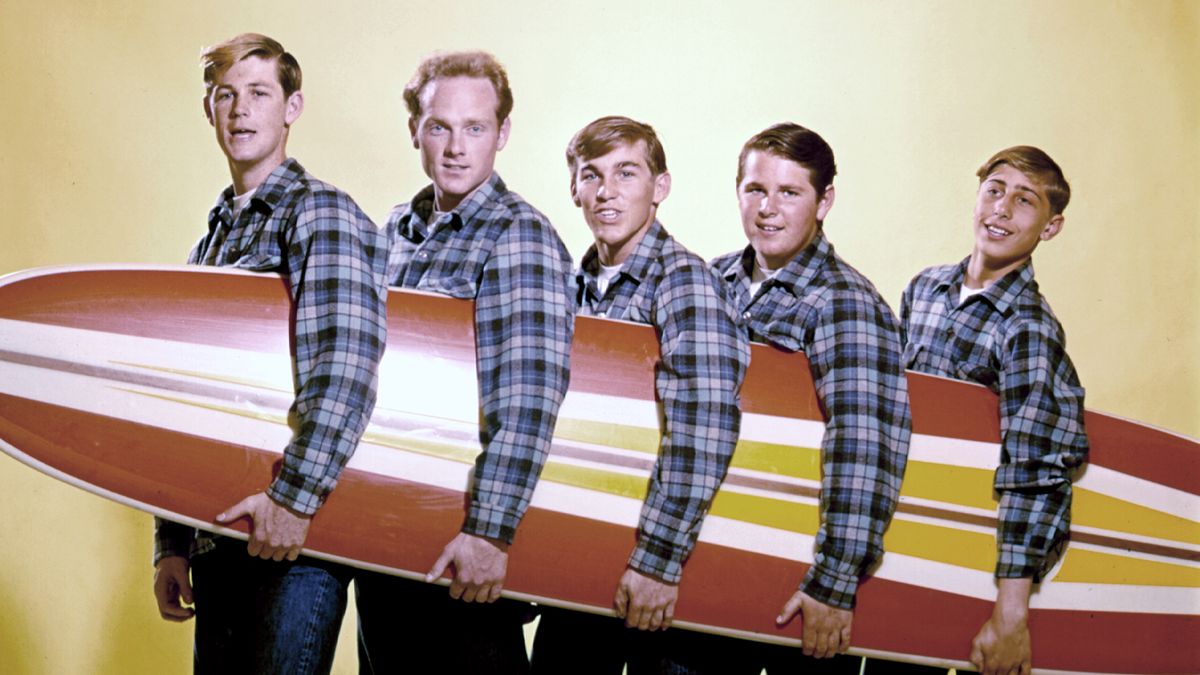 The Beach Boys began their careers with sunny paeans about California life that led to multiple No. 1 hits, induction into the Rock and Roll Hall of Fame and years of successful tours. However, the band has also faced harsh realities such as Brian Wilson's mental illness, the early deaths of Dennis and Carl Wilson, and conflicts within the group over their music.

The Beach Boys arrived on the scene with "Surfin'" in 1961. Of the group's founding members — brothers Brian, Carl, and Dennis, their cousin Mike Love and Brian's classmate Al Jardine — only Dennis surfed (the ocean scared Brian), but that didn't keep them from creating more hit songs that highlighted the idyll of life in California, including "Little Deuce Coupe" and "Surfin' U. S. A." Their songs were usually composed, produced and arranged by Brian, with Love often providing lyrics.

Though early Beach Boys songs focused on fun and sun, the Wilson brothers had actually endured a horror-filled childhood. Father Murry engaged in physical, verbal and psychological abuse (he'd even take out his glass eye and have a boy look into the empty socket). Brian's deafness in one ear may have been caused by a blow from his father. As Murry was initially the band's manager, he continued to put pressure on his sons while they found success. Brian once said of his father, "He scared me so much I actually got scared into making good records."

Brian became frustrated enough to fire Murry in 1964. However, he still felt pressure to keep creating hits and that year had his first nervous breakdown. "I was run down mentally and emotionally because I was running around, jumping on jets from one city to another on one-night stands, also producing, writing, arranging, singing, planning, teaching — to the point where I had no peace of mind and no chance to actually sit down and think or even rest," Brian later explained. "The rubber band had stretched as far as it would go." 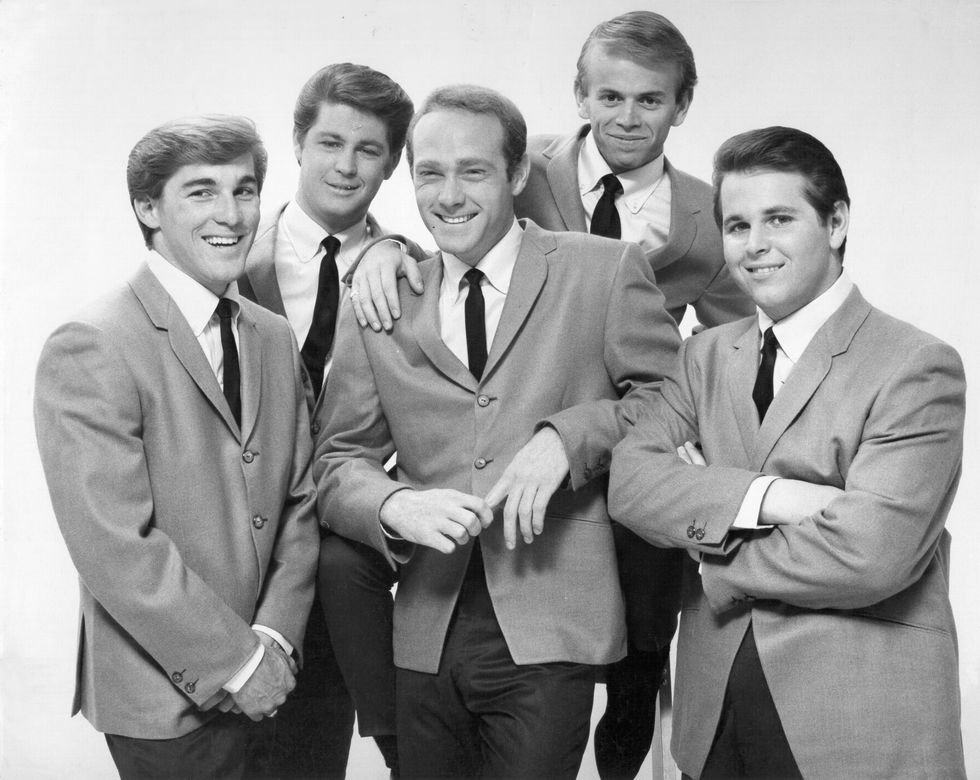 The members didn't always agree on their sound

Brian soon stopped touring (Bruce Johnston was brought into the group at that point). But he continued to create hit songs, like 1965's "Help Me, Rhonda." His talent was such that his eccentricities — such as a sandbox around his piano, a tent in his den and having meetings in an empty pool — were worked around.

Brian wanted to stretch his musical abilities with the album Pet Sounds, while Love believed the Beach Boys should stick to songs that matched their track record of success. The Beatles were among the admirers of Pet Sounds when it was released in 1966, but despite Brian's vision and creativity, the album wasn't a success, which devastated him.

Smile, the next album Brian began working on, also didn't find a fan in Love, who later said, "I admit to wanting to make a commercially successful pop record, so I might have complained about some of the lyrics on Smile, calling them acid alliteration." Though "Good Vibrations," a track intended for Smile, reached No. 1 in 1966, Brian ended up abandoning the album. According to some reports, this was due to Love's disapproval, though Brian has also said, "We were taking a lot of psychedelic drugs, like the Beatles and the Rolling Stones, so it got us very into the music to the point where we got lost in it. We said that we better shelve this because it’s getting too heavy."

Dennis led a self-described "fast life." Before the Manson Family committed a series of murders in 1969, he'd provided a home to Charles Manson and his followers, and had even worked on a song with Manson. In 1979, the Beach Boys told Dennis to leave the group due to his excessive drinking. He came back the next year but remained so unreliable that bodyguards were enlisted to keep him from drinking before going on stage. He and Love clashed so much that restraining orders were required.

In 1983, Dennis was again told he needed to address his alcoholism or wouldn't be welcome on tour with the band. That year he also entered into his fifth marriage. His bride was Love's illegitimate daughter. The marriage soon fell apart, and Dennis found he had little money left after years of extravagant spending, along with the need to pay child support and alimony.

In December 1983, Dennis entered a rehab facility, but he left after a few days. On December 28, he was at the marina where he'd once kept a boat (the vessel had been sold due to his financial straits). He then decided to dive into the 58-degree water in search of possessions he'd tossed overboard years earlier. He didn't resurface after one dive and his dead body was found over an hour later. He was just 39 years old.

READ MORE: Dennis Wilson and Charles Manson Had a Brief and Bizarre Friendship

Brian, who has said he started hearing voices after taking LSD (he would eventually be diagnosed with bipolar schizoaffective disorder), began to behave more and more erratically in the 1970s. He took to his bed, and by 1976 was barely functioning. "Meals happened without me," he admitted. "Kids went to school and came back and I might still be in a bathrobe up in the bedroom or downstairs, sitting at the piano, still in the bathrobe."

Brian's wife Marilyn arranged for him to see Dr. Eugene Landy, a psychologist who helped Brian return to the studio in 1976. Landy was terminated when he wanted to take part in management decisions and receive income from the Beach Boys. Yet after leaving Landy's care, Brian again lost control of his life. He and Marilyn divorced in 1979, he stopped bathing, used drugs and his weight climbed to more than 300 pounds. The Beach Boys fired Brian in 1982 and made seeing Landy again a requirement if he wanted to return.

With little choice, Brian returned to Landy's care in 1983. But he ended up being cut off from his family, friends and fellow band members and was also surveilled around the clock. At one point Landy lived Brian's house, while his patient was dispatched to a rental. Landy did help Brian lose weight and get off drugs, but the Beach Boy was often sedated and overmedicated. When Brian went to the studio, Landy claimed co-writing credit for songs. Landy also became involved in business decisions, which ran counter to his responsibilities as a therapist.

Love sued Brian and filed a defamation claim in the '90s

Carl ended up overseeing the band's music when Brian wasn't able to handle the role. The Beach Boys kept touring, but no new songs came close to matching their earlier success — until "Kokomo." It sold more than a million singles and landed at No. 1 in 1988, making it the band's only top hit without Brian's fingerprints.

Also in 1988, the Beach Boys were inducted into the Rock and Roll Hall of Fame. However, the ceremony was perhaps most notable for Love insulting an array of fellow musicians, including Bruce Springsteen, Paul McCartney, Diana Ross and Mick Jagger. (Love, a long devotee of meditation, later suggested the outburst may have been linked to a missed session.)

Carl died of lung cancer in 1998. That same year, Love was granted the sole right to use the "Beach Boys" name while touring. When Jardine tried performing in shows that referenced him being a "Beach Boy," Love stopped him in court. In the early 1990s, Love also sued Brian because he hadn't been credited for lyrics on 35 songs. In addition, he filed a defamation claim because Brian's 1991 memoir didn't give Love credit for co-writing hit Beach Boy songs. He ended up receiving a payment of $1.5 million from Brian's publisher.

The band reunited in 2012, but not without tour drama

In the 1990s, Brian was able to get away from the problematic Landy's control, helped by his second wife, Melinda, whom he'd married in 1995. He also surprised the world by stepping back onstage and performing. In 2004, he completed the long-delayed Smile. (Love filed another lawsuit related to a promotional CD tied in with Smile's release but the case was dismissed).

In 2012, the remaining Beach Boys — Brian, Love, Jardine, Johnston and David Marks, a guitarist from early albums — reunited to perform at the Grammy Awards. That year they also toured together and released a new album, That’s Why God Made the Radio. But the full reconciliation some fans may have hoped for didn't happen. Love, who continued to maintain rights to the Beach Boys' name in touring, decided not to add in more performances with the full group.

Brian protested his cousin's decision, telling CNN, "I'm disappointed and can't understand why he doesn't want to tour with Al, David and me. We are out here having so much fun. After all, we are the real Beach Boys." Love countered that they were playing smaller venues that couldn't handle the requirements of the bigger tour.

Their legacy continues to thrive

Despite their ups and downs, the Beach Boys' music continues to find fans. "The main thing about the Beach Boys performances is the positivity, and the multiple generations enjoying our show together," Love said in 2019. "That's one of the greatest things I can think of about what we do and have been doing for decades now."

Mental health worries caused Brian to postpone a tour in 2019 (though he can't tour as a "Beach Boy," he can go out under his own name), but his music endures. He said in 2015, "For me, music is about love. Love is the message I want to share. I hope people feel the love in my music. That makes the hard work worth it."