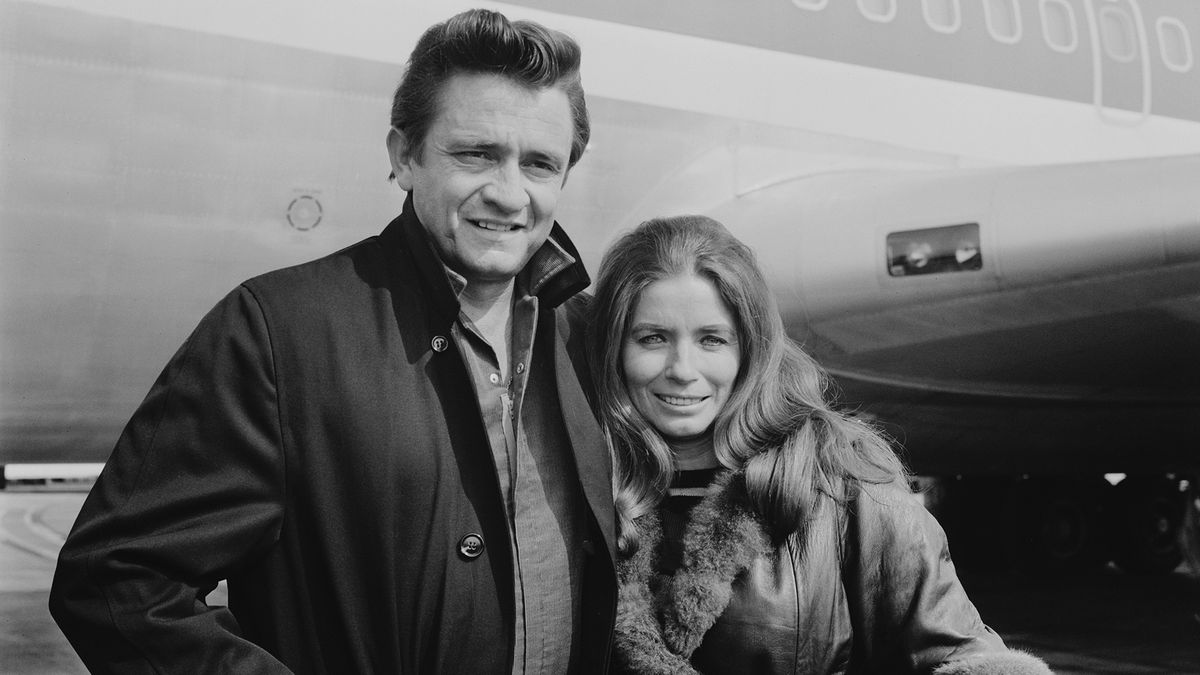 Their story inspired iconic love songs and was recreated in an Oscar-nominated film. Johnny and June Carter Cash became the torch-bearers of deep, passionate love – country-music style. But the lovebirds navigated rough waters leading up to and during their 35-year marriage which produced one son, multiple hit songs about heartache, adoration and redemption, and ended when they took their final mortal bows within four months of each other.

They were both married when they first met

Johnny and June first met backstage at Nashville, Tennessee’s Grand Ole Opry in 1956, though it would be a dozen years before they would become husband and wife. Carter had been aware of Cash through the recommendations of Elvis Presley, with whom she had been singing backup. “Elvis would make me go into these little cafes and listen to John [on the jukebox] when we played in the south – in the Carolinas and all down through Florida and Georgia,” Carter reportedly said of how she initially became aware of music’s Man In Black.

“I can’t remember anything else we talked about, except his eyes,” she wrote in the liner notes of Cash’s 2000 box set, Love, God, Murder, of their first meeting at the Opry. “Those black eyes that shone like agates… He had a command of his performances that I had never before. Just a guitar and a bass and a gentle kind of presence that made not only me, but whole audiences become his followers.”

Cash remembers telling Carter he had “always wanted to meet her,” and was aware of her through her famous country music family: Her parents were Ezra Carter and Mother Maybelle Carter and June sang and performed as part of the Carter Sisters, a group composed of herself and siblings Helen and Anita.

Both were married to other people at the time of that first fateful meeting. Cash to Vivian Liberto Cash, with whom he had four daughters: Roseanne, Kathy, Cindy and Tara. Carter’s first marriage was to honky-tonk singer Carl Smith and the couple had one daughter, Rebecca. The marriage ended in 1956 and a year later Carter married former footballer Edwin “Rip” Nix. The union produced a daughter, Rozanna “Rosie,” before the couple divorced in 1966. 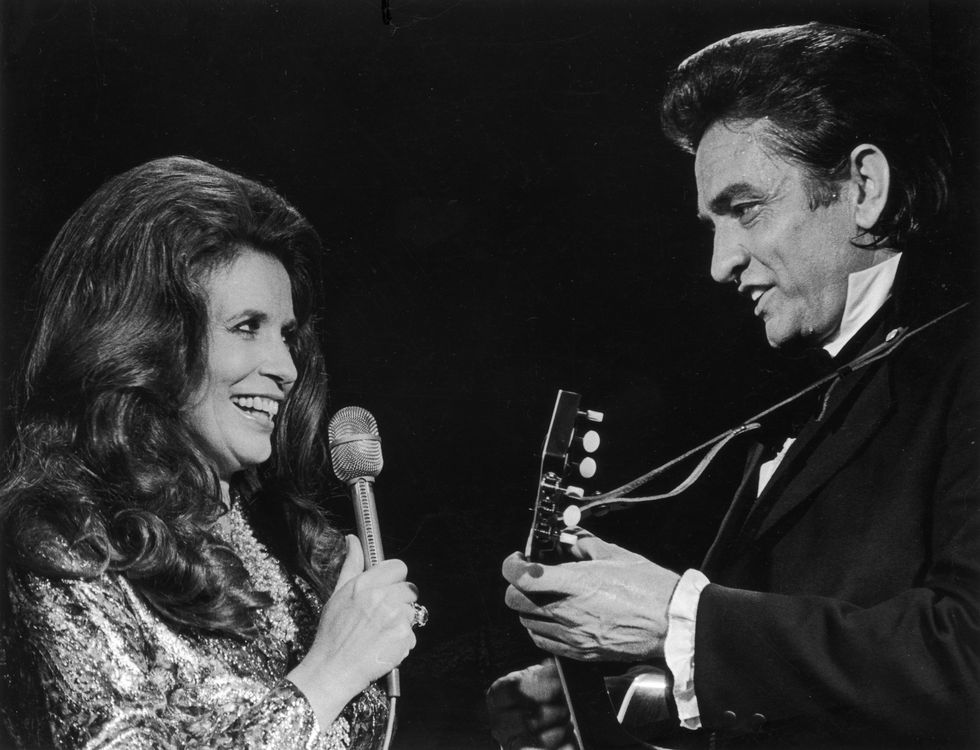 Cash was struggling with similar feelings at the time, telling Rolling Stone that they had yet to say, “I love you,” to each other: “Because we knew what was going to happen: That eventually we were going to be divorced, and we were going to go through hell. Which we did.”

According to daughter Roseanne, there was already tension in the family home due to Cash’s ongoing battle with alcohol, amphetamine and barbiturate addiction. Cash’s first wife and mom to Roseanne was also worried about her husband straying while on tour. Cash wrote “I Walk the Line” in 1958 about his then-wife’s fidelity fears. “He wrote, ‘I’m gonna stay true,’” Roseanne says in the Ken Burns docu-series Country Music. “Of course that wasn’t true.”

Liberto would begin to suspect her husband of having an affair with Carter, and in 1966 filed for divorce, citing fidelity concerns and his addiction issues as reasons. Cash and Carter were married two years later. “It seemed inevitable, though it was so painful for my mom,” Roseanne said to People in 2019 of Cash and Carter’s relationship.

READ MORE: 10 Things You May Not Know About Johnny Cash

Though neither ever spoke of exactly how and when their amorous relationship began, Cash made a very public proposal to Carter after several previous attempts had reportedly failed. Carter finally said yes when Cash popped the question in front of a concert audience of 7,000 people in London, Ontario in February 1968.

Two years later Carter gave birth to a son, John Carter Cash, and the couple blended their existing families. “I had two really good examples from women in my life,” Roseanne told People. “My mom gave me this powerful sense of discipline, family, mothering and detail orientation. And June gave me this sense of expansiveness and how to live as a performer.”

Professionally the couple continued to perform together, earning awards and releasing duets including “Jackson,” “The Loving Gift,” “If I Were a Carpenter,” “No Need to Worry” and “Long-Legged Guitar Pickin’ Man.” They also starred in and hosted The Johnny Cash Show, a television music variety series which aired on ABC from 1969 to 1971.

Cash said Carter 'saved my life more than once'

“Unconditional” was the word Cash often used to describe the love he and Carter had. She helped him eventually overcome his addictions, being there for him during numerous bouts of rehab, staying by his side through sobriety and when he returned to using drugs and alcohol. Carter battled her own demons: She was a compulsive shopper and also became a serious prescription pill-popper, according to their son’s 2007 memoir, Anchored in Love: An Intimate Portrait of June Carter Cash.

Regardless, his parents’ “love for each other lasted throughout their whole life,” John told Reuters in 2007. “They didn’t give up… They accepted each other totally unconditionally.”

“You hear that phrase a lot, but it’s real with me and her,” Cash told Rolling Stone of his “unconditional” love for his wife. “She loves me in spite of everything. In spite of myself. She has saved my life more than once. … She’s always been there with her love, and it has certainly made me forget the pain for a long time, many times. When it gets dark, and everybody’s gone home and the lights are turned off, it’s just me and her.”

An accomplished entertainer in her own right, Carter was often portrayed in the press as existing in her husband’s shadow. “I was never looking back in regret. I never thought, ‘Oh why didn’t I become an actress?’ or ‘Why did I just go paddling along after John,’” she reportedly said of her life with Cash. “I’ve always walked along right by his side, and he’s always supported everything I do.”

The couple remained together for the rest of their lives. Carter died of complications following heart surgery on May 15, 2003, in Nashville. A devasted Cash died later that year, on September 12, from complications associated with diabetes.

Cash gave his final live performance on July 5, 2003, at the Carter Family Fold in Hiltons, Virginia. Visibly frail, he honored his recently deceased wife between songs. “The spirit of June Carter overshadows me tonight with the love she had for me and the love I have for her,” he said. “We connect somewhere between here and Heaven. She came down for a short visit, I guess, from Heaven, to visit with me tonight to give me courage and inspiration, like she always has… I thank God for June Carter. I love her with all my heart.”