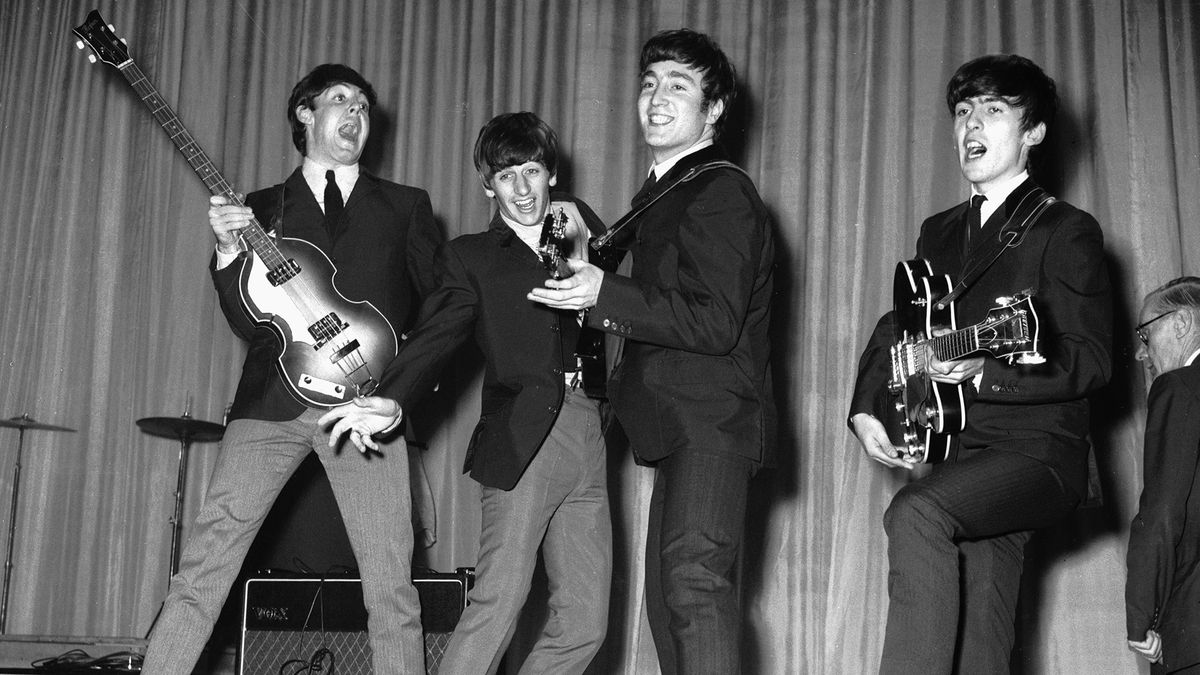 Before John, Paul, George and Ringo became the Beatles, they were simply four teenagers from Liverpool. Never could John Lennon, Paul McCartney, George Harrison and Ringo Starr have imagined they would go on to form one of the most successful groups in modern history, influencing the popular culture in not only music, but also fashion, film and global representation.

In the late 1950s and early 1960s, it was difficult to imagine a band hailing from the relatively poor northwest port city of Liverpool, England, could get a gig in the thriving London music scene of the south, let alone export their eventual homegrown success to a world eagerly opening up to the counter-culture movement of the '60s and the burgeoning phenomenon that was called rock 'n' roll.

Lennon and McCartney first met while playing in a skiffle band

A fateful meeting between two music-loving teenagers in 1957 is where it all began. Sixteen-year-old rhythm-guitarist Lennon, the son of a merchant seaman, was performing with the Quarrymen, a skiffle (folk music blended with jazz or blues) band booked to perform at events at a church fete in Woolton, Liverpool. While setting up their instruments for the evening performance, the band’s bass player introduced Lennon to a classmate, 15-year-old McCartney, who would join in on a couple of numbers that night and soon would be offered a permanent spot in the Quarrymen.

McCartney, the son of a former band-member and nurse, would play his first official event with the group in October, but things didn’t go exactly as planned. “For my first gig, I was given a guitar solo on ‘Guitar Boogie.’ I could play it easily in rehearsal so they elected that I should do it as my solo,” McCartney said in the Anthology documentary. “Things were going fine, but when the moment came in the performance I got sticky fingers; I thought, ‘What am I doing here?’ I was just too frightened; it was too big a moment with everyone looking at the guitar player. I couldn’t do it. That’s why George was brought in.”

Harrison, the son of a bus conductor and shop assistant, joined the Quarrymen as lead guitarist at age 15. Influenced by rockabilly, his guitar licks would help shape the group’s early sound. Though still performing as the Quarrymen, Lennon, McCartney and Harrison would go on to form the core that would soon become the Beatles.

Throughout 1958 and 1959 the Quarrymen gigged whenever they could, including local parties and family events such as the reception for Harrison’s brother’s wedding. Professional bookings included venues such as the Casbah Coffee Club in Liverpool and Hippodrome in Manchester.

READ MORE: How Michael Jackson Bought the Publishing Rights to the Beatles' Song Catalog at the Advice of Paul McCartney

The name of the band was in flux during this period, which would witness the group play under monikers Johnny and the Moon Dogs as well as The Silver Beetles and The Silver Beats. An art school student and friend of Lennon’s, Stuart Sutcliffe, was brought into the band to play bass. Sutcliffe and Lennon are often credited with coining the name the Beatles, though various stories abound on the actual origins. The name that would become synonymous with modern music was a combination of beetles and beat, hence the Beatles.

Forging a friendship that would become the basis of their singer-songwriter partnership in the future, Lennon and McCartney would often go away together, playing acoustic sets in small pubs. “John and I used to hitch-hike places together,” McCartney says in Paul McCartney: Many Years From Now by Barry Miles. “It was something that we did together quite a lot; cementing our friendship, getting to know our feelings, our dreams, our ambitions together. It was a wonderful period. I look back on it with great fondness.” 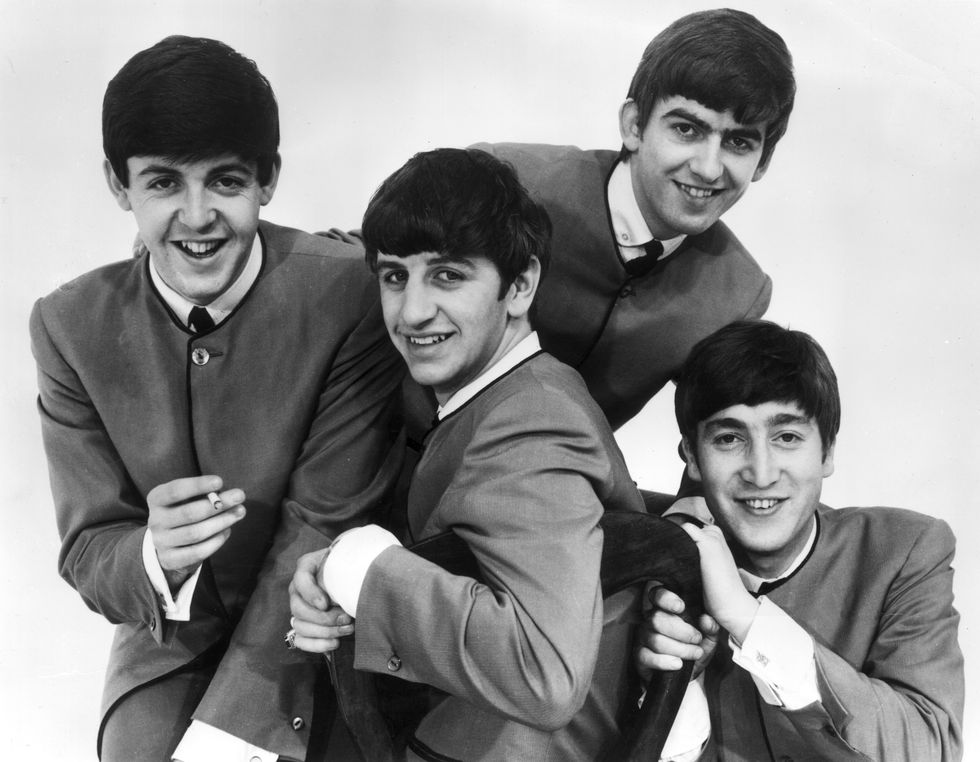 They struggled to keep a drummer, eventually recruiting Pete Best for the role

In 1960 and the first half of 1961, the group performed at venues including social clubs and dance halls around England and Scotland, but keeping a regular drummer was proving to be difficult.

“We had a stream of drummers coming through,” Harrison recalls in Anthology. “After about three of these guys, we ended up with almost a full kit of drums from the bits that they’d left behind, so Paul decided he’d be the drummer. He was quite good at it. At least he seemed ok; probably we were all pretty crap at that point. It only lasted for one gig, but I remember it very well. It was in Upper Parliament Street where a guy called Lord Woodbine owned a strip club. It was in the afternoon, with a few perverts – five or so men in overcoats – and a local stripper. We were brought in as the band to accompany the stripper; Paul on drums, John and me on guitar and Stu on bass.”

When their residency at the notoriously rough Grosvenor Ballroom in Liscard, Wallasey, was canceled in part due to regular outbreaks of violence among the crowd, the Beatles looked abroad for work. Having success in Germany with a different band, the Beatles’ then-manager/booking agent Allan Williams thought Hamburg could prove a successful destination, having had success with other bands there. The only problem was they lacked a drummer.

On short notice, they recruited Pete Best, whom they had seen play at Casbah Coffee Club. Lennon, Harrison, McCartney, Sutcliffe and Best left England in August 1960. Playing regular gigs at the Indra Club, the larger Kaiserkeller and the Top Ten Club in Hamburg forged them as a group.

“It was Hamburg that did it,” Lennon recalls in Anthology. “That’s where we really developed. To get the Germans going and keep it up for 12 hours at a time we really had to hammer. We would never have developed as much if we’d stayed at home. We had to try anything that came into our heads in Hamburg. There was nobody to copy from. We played what we liked best and the Germans liked it as long as it was loud.”

Their first music contract was signed in January 1962

The Beatles performed in Hamburg on and off from 1960 through 1962 with engagements back in Liverpool interspersed. It was at a performance at hometown venue the Cavern Club where Brian Epstein first saw the group play. Epstein was curious after hearing mention of them in his family-owned record store and in the pages of Mersey Beat magazine. He returned to take in the show a few more times and on December 10, 1961, Epstein approached the band about managing them, and a five-year contract was signed in January 1962.

That year would prove to be momentous for the Beatles. On April 10, Sutcliffe died of a brain hemorrhage. June 6 marked the first time the group would record at EMI Studios located at 3 Abbey Road, St. Johns Wood, London. Produced by George Martin, who would go on to be extensively involved in their first albums, they recorded four songs: “Love Me Do,” “Besame Mucho,” “Ask Me Why” and “PS I Love You.” Martin was impressed with the group but believed Best was not up to the job as drummer. Epstein fired Best on August 16 and replaced him with 21-year-old Starr, the son of local confectioners who had been playing with bands in the area. Starr made his debut with Tte Beatles two days later.

The Beatles' first single, 'Please Please Me,' reached No. 1 in the U.K.

Epstein saw the potential of the band, not just in their hometown but far beyond, especially now that the core four members were in place. He cleaned up their image and began to work in earnest to promote them. The band’s first U.K. single, “Please Please Me,” was recorded in November and released in January 1963. It topped the U.K. charts and began a streak that would see 11 of their 12 studio albums through 1970 reach No. 1 in the U.K. It would be Epstein who would eventually travel to the United States and secure a booking for the band on The Ed Sullivan Show.

The Beatles made their first appearance on the U.S. variety show in February 1964, an event that was witnessed by a reported audience of over 70 million people. “It was very important,” McCartney recalls of the milestone. “We came out of nowhere with funny looking hair, looking like marionettes or something. That was very influential. … It’s like, ‘Where were you when Kennedy was shot?’ I get people like Dan Aykroyd saying, ‘Oh man, I remember that Saturday night; we didn’t know what had hit us – just sitting there watching Ed Sullivan’s show.’ Up until then there were jugglers and comedians like Jerry Lewis, and then suddenly, the Beatles!”