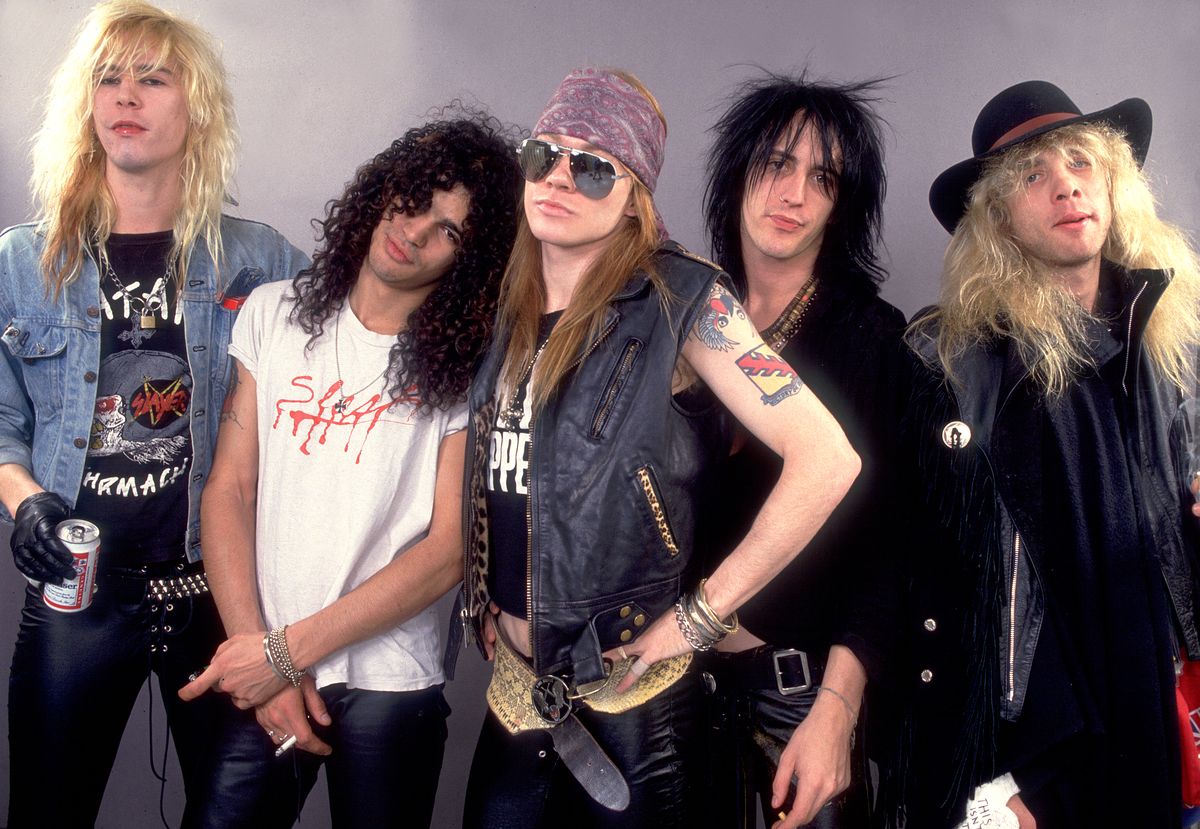 In many ways, the rise of Guns N' Roses into one of the world's biggest bands in the late 1980s represents the quintessential Hollywood success story, a culmination of ambitions realized by five boys who left behind past lives and old names to reinvent themselves as rock royalty.

The first to Los Angeles were Steven Adler – born Michael Coletti – and Saul Hudson – soon to be known as "Slash" – in the early 1970s. As noted in My Appetite for Destruction: Sex & Drugs & Guns N' Roses, Adler came with his big brother and single mom, who was seeking to rebuild her life after splitting from an abusive husband in Cleveland, Ohio.

Slash, born in London to parents who put their artistic talents to use in the music industry, landed in a show business environment in L.A. With houseguests that included David Bowie (at one point his mom's boyfriend) and the Rolling Stones' Ron Wood, he began drinking regularly as an adolescent and was largely left unsupervised as he began exploring the Hollywood nightlife.

Slash and Adler crossed paths at Bancroft Junior High, the latter drawing attention after a particularly bad fall from his skateboard. They struck up a fast friendship, prompting Adler to invite Slash over to check out his electric guitar and amp. Within a few months, Slash heard Aerosmith's Rocks for the first time, igniting the fire that would turn him into one of the premier guitarists of his generation.

The two formed a band during their time at Fairfax High, though the school mainly served as a meeting point for them to talk music and get high. Adler dropped out in 10th grade and Slash followed as a junior, his guitar proficiency already strong enough to earn him a spot in a band called Tidus Sloan. 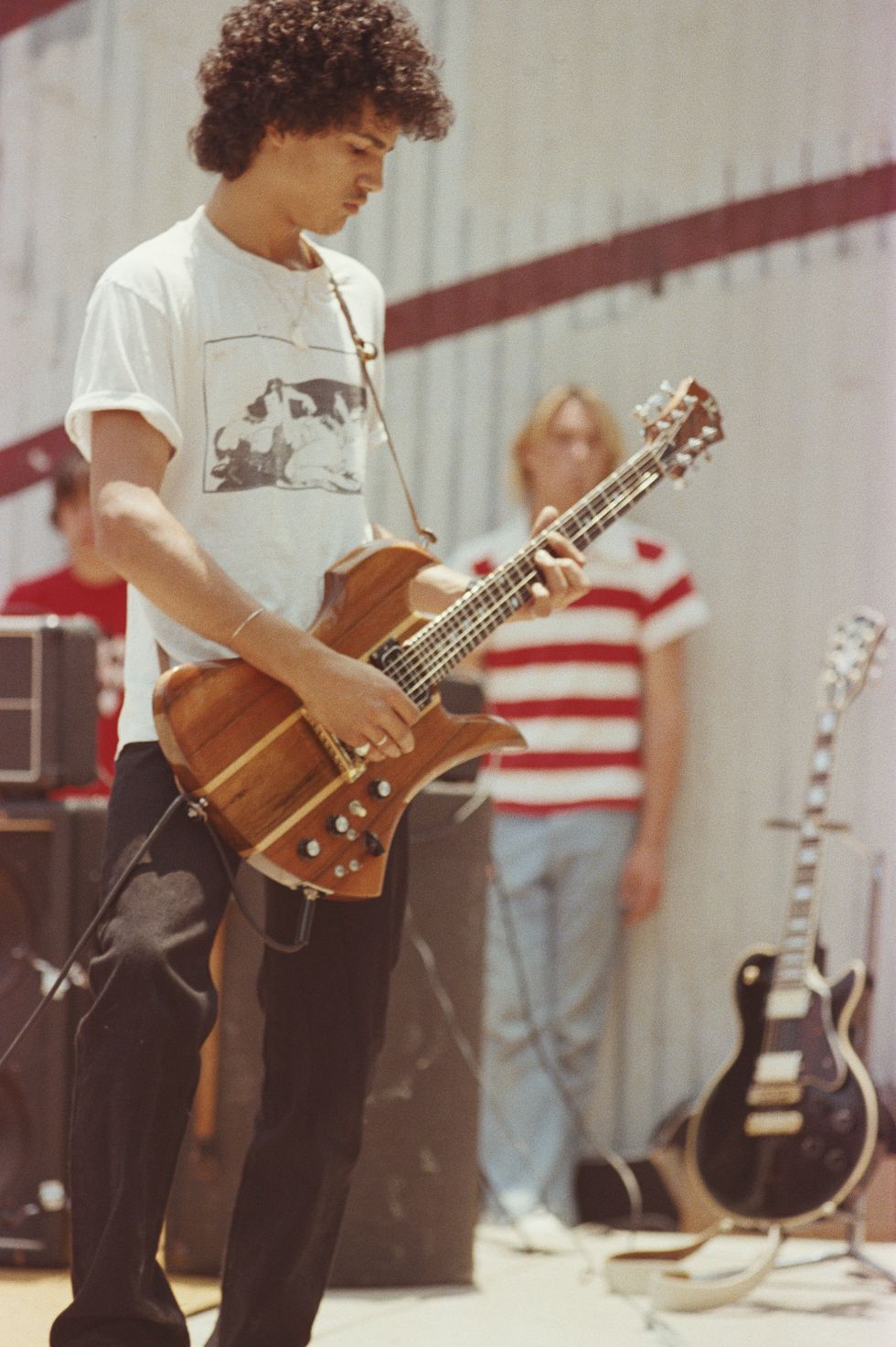 Meanwhile, as described in Watch You Bleed: The Saga of Guns N' Roses, a pair of students at Jefferson High School in Lafayette, Indiana – Jeffrey Isbell (better known as Izzy Stradlin) and Bill Bailey – had also found common ground with their musical tastes.

Raised in a strict Pentecostal household, Bailey sang and played piano in church, with Elton John serving as a huge early influence. He and Stradlin soon bonded over their shared affinity for rock heavyweights like Led Zeppelin, with the emergence of punk in the late 1970s energizing their ambitions to bang out music with their own bands.

Already rebelling against the constraints imposed at home and in their Midwestern community, Bailey began pushing the envelope upon discovering that his real dad was a man named William Rose. Referring to himself as "W. Axl Rose" – after his involvement in a band called Axl – he dropped out of school and drew the ire of authorities with his frequent public intoxication and fighting.

The more level-headed of the two, Stradlin finished high school in 1980 and fled Lafayette to pursue his musical ambitions in L.A. He enjoyed more immediate success than most, landing a gig as a drummer in a cross-dressing band called Naughty Women, before moving on to gigs with the Atoms and Shire.

Rose tracked down Stradlin with frequent visits to L.A., eventually joining his old friend in the seedier regions of Hollywood in late 1982. A misfit in the glam-metal scene that was emerging with the rise of bands like Mötley Crüe, Rose nevertheless impressed acquaintances with his unique, powerful vocal capabilities.

After a stint with a group called Rapidfire, Rose teamed with Stradlin and local guitarist Chris Weber to create original material, their efforts leading to what became "Reckless" and other early songs of the Guns N' Roses catalog. Known variously as A.X.L., Rose and then Hollywood Rose, the group began drawing some attention, although, according to Weber, their vocalist was recognized more for his intensity than the stage moves he would later show off as the GNR frontman.

"Axl was so full of pent-up energy that he would shake, literally tremble, when he got up there," recalled Weber. "He'd be letting this energy out, and I could see him just vibrating. It would actually be kind of scary seeing someone evoking all this power, energy, and emotion."

Already familiar with the others, Slash and Adler briefly joined the Hollywood Rose lineup in 1984, before the band split and sent its members to other collaborators. Stradlin joined the revival of the heavy metal group London, while Rose landed with guitarist Tracii Guns' group, L.A. Guns.

McKagan conceived the 'Hell Tour' to test the band's commitment

The final piece of the GNR puzzle arrived by way of Seattle in the tall, lanky form of Michael "Duff" McKagan in fall 1984. The youngest child of a large, musical family, McKagan grew up with the Beatles and Stones as influences, before getting turned on to Iggy Pop and finding his way into the burgeoning Northwest punk movement.

Responding to a newspaper ad for a group called Road Crew, he recalled in his memoir, It's So Easy: And Other Lies, McKagan found himself sitting in L.A.'s famed Canter's Deli with Slash and Adler. But while he was blown away by Slash's guitar playing, he felt the other two were on a different page musically, and soon took his bass elsewhere.

In early 1985, McKagan received an invite from Stradlin, a neighbor, to join a new band formed in the remnants of L.A. Guns and Hollywood Rose. Guns N' Roses featured Rose on vocals, Guns on lead guitar, Stradlin on rhythm guitar and Rob Gardner on drums.

In McKagan's retelling, he was unsure of whether Guns and Gardner were willing to put everything on the line for the group, so he lined up a "tour" of gigs up the West Coast to test everyone's commitment. When Guns and Gardner backed out, the members of Road Crew were ready to step in as replacements.

In early June 1985, Rose, Slash, Stradlin, McKagan and Adler entered a studio to rehearse together for the first time. "From the moment the five of us leaned into our first song, we could all hear and feel that the fit was right," remembered McKagan. "The chemistry was immediate, thunderous, and soulful. It was amazing and all of us recognized it instantly."

A few days later, the quintet embarked on what became known as the "Hell Tour," a journey that forced them to hitchhike nearly the entire 1,100-mile trip to Seattle after their car broke down outside L.A. Amazingly, the ordeal brought them closer together, sealing their pact as a group that would soon return to take over the L.A. circuit, ignite a bidding war among labels and blaze their way to the top of charts with anthems that left the other hair metal bands in the dust.