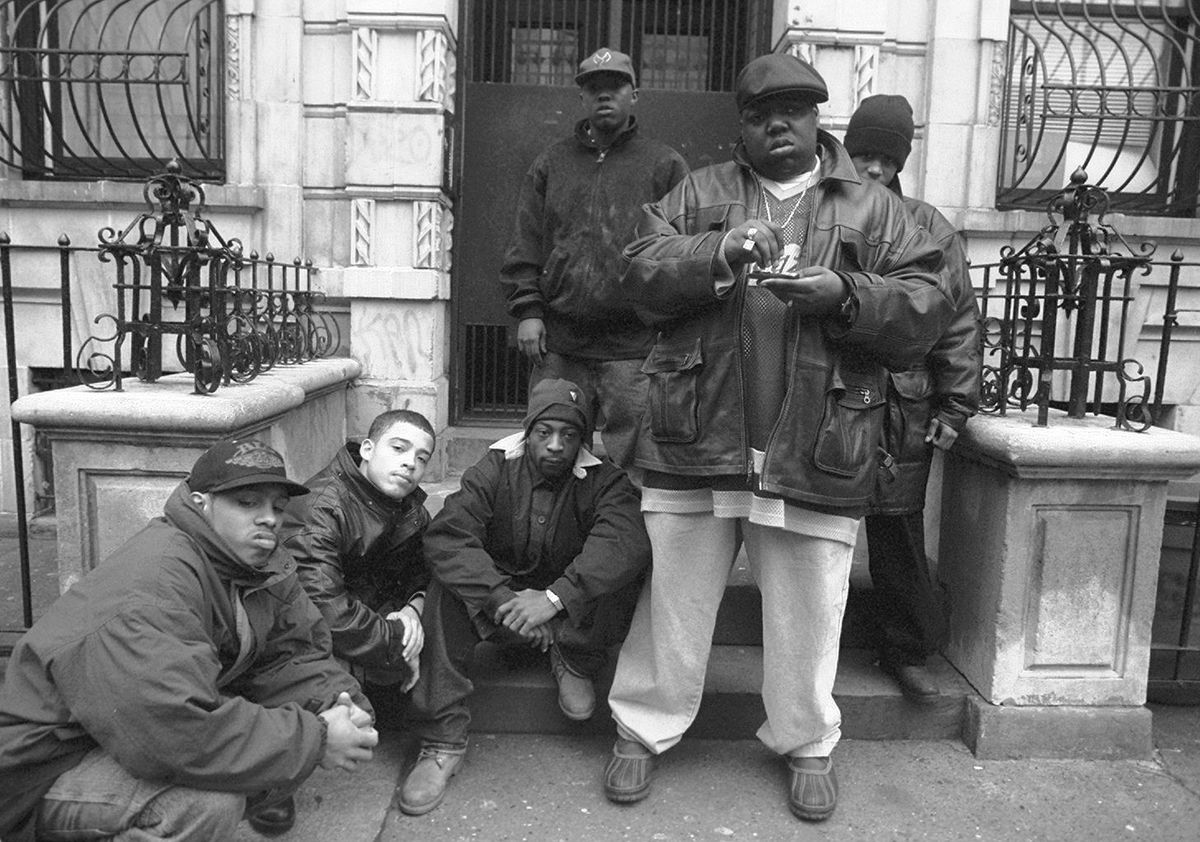 Christopher Wallace, also known as the Notorious B.I.G. and Biggie Smalls, was at the vanguard of 1990’s rap music and his fame would burn glaringly bright, if only briefly in life. Lauded as one of the greatest rappers of all time by peers and within the recording industry, Small’s legacy, influence and success would go on to almost eclipse what he achieved in life ahead of his shocking 1997 murder at age 24.

Born May 21, 1972, in Brooklyn, New York to Jamaica-born parents, his father left the family when Smalls was 2 years old. His mother, Voletta, taught preschool and worked other jobs in order to give her son a solid education. He attended the Roman Catholic Bishop Loughlin Memorial High School before transferring to George Westinghouse Career and Technical Education High School where his skill with words helped him excel in English studies.

Growing up in and around the Bedford-Stuyvesant neighborhood of Brooklyn, Smalls was witness to and immersed in street life from a young age, entering adolescence during the crack cocaine epidemic of the 1980s and 1990s. “Christopher did very well in high school; it’s just that he talked back a lot,” Voletta said of her son. “He was a smart-ass.” Seeing street hustling as a quick cash route, Smalls dropped out of high school at age 17.

Smalls began dealing drugs around the age of 12, plying trade along Brooklyn’s Fulton Street, activities his mother says she was unaware of. “I found out about my son and his little antics through his music and through magazines,” she told The New York Times. “I read this thing and said, ‘Huh? I never knew.'”

Arrested on weapons possession charges in 1989, he received a five-year probationary sentence he violated the following year; after that Smalls was charged with dealing cocaine in North Carolina and spent nine months behind bars. He was arrested in 1995 on robbery and aggravated assault charges and again in 1996 when police found marijuana and firearms in his home. Such encounters with the law and his honesty regarding his drug dealing helped Smalls construct a gangsta rap persona built on authenticity.

Interested in rap from a young age, he began performing with local rap crews including the Old Gold Brothers where his skill with words — both verbal and written — was soon being celebrated and appreciated. By age 13 he was nearly six feet tall and heavyset, his physical presence earning him the childhood nickname “Big” which he would capitalize on in his emcee career as Biggie Smalls, Big Poppa and the Notorious B.I.G. With friends, Smalls made demos in his basement, one of which was passed to the Unsigned Hype column editor at The Source magazine before catching the ear of Sean “Puffy” Combs who was working at Uptown Records. Combs signed the baritone-voiced rapper immediately, taking him to his new label, Bad Boy Records, when it launched in 1993, “’cause he said it sounded like I could just rhyme forever,” Smalls told Rolling Stone in 1995. “I’m definitely a writer,” he added of his skill. “I don’t even know how to freestyle.” 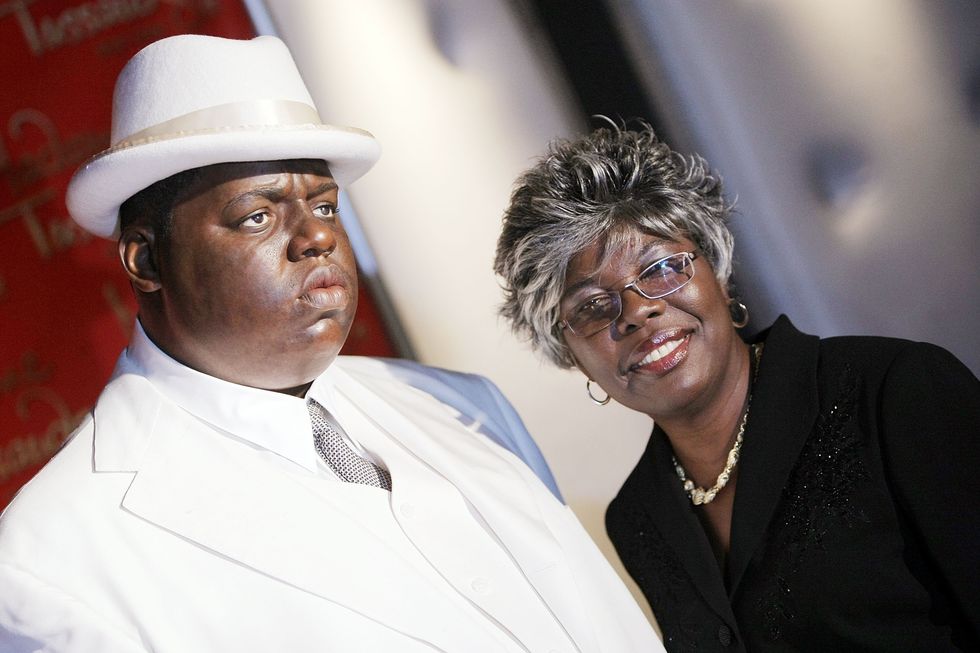 Voletta Wallace poses for a photo with a wax figure of her son, Biggie Smalls; Photo: Scott Gries/Getty Images

As his career took off, Smalls' personal life suffered

Smalls initially gained recording attention by appearing on other artists’ singles, but it was his partly-autobiographical debut album, Ready to Die (1994), that received critical acclaim and delivered the hits “Juicy,” “One More Chance” and “Big Poppa,” the latter reaching No. 6 on the Billboard Hot 100 and earning a 1996 nomination for Grammy Award for Best Rap Solo Performance, the same year he led his protégé group Junior M.A.F.I.A. — featuring friends of Smalls’ including Lil’ Kim — to chart success. Ready to Die would be the only studio album released in his lifetime.

His first child, daughter T’yanna, was born in 1993 with ex-girlfriend of four and a half years, Jan Jackson. Conceived while working on his first album, Smalls would dedicate Ready to Die to T’yanna, but his relationship with her mother had deteriorated to the point they split eight months after her birth. In an interview with XXL, Jackson recounted Smalls’ numerous infidelities. “He always had the women. It wasn’t about money. This man had charisma out the wazoo,” she said. “I don’t care what anybody says about his looks, his weight. There’s something about his personality that makes him able to pull almost any woman that he wants. That didn’t start after the money, it was that way in the beginning.”

A month prior to the release of his first album, Smalls married R&B singer Faith Evans, whom he had recently met at a Bad Boy Records photoshoot. “I married her after knowing her eight days and I was happy. That was my baby,” he said to Vibe magazine but would concede the speed of their courtship did not provide a solid foundation. “We should have got to know each other and then got married,” he added.

Evans soon separated from Smalls, reportedly when she discovered his affair with Lil’ Kim. He also began dating performer Charli Baltimore with the two appearing in public together, something he had avoided previously with Lil’ Kim. Evans would eventually reconcile with Smalls and give birth to a son, Christopher “CJ” Wallace Jr., in October 1996, a time in which Smalls was reportedly continuing his affair with Lil’ Kim, on whose record he was working. Lil’ Kim would eventually confirm the affair and rumors of violence in her relationship with Smalls, revealing that a story regarding Smalls threatening her at gunpoint during a studio session did in fact occur. “It happened,” she said during a 2018 interview with Ebro In the Morning, adding the recounted story was very “close to the truth. We did have a very violent relationship.” 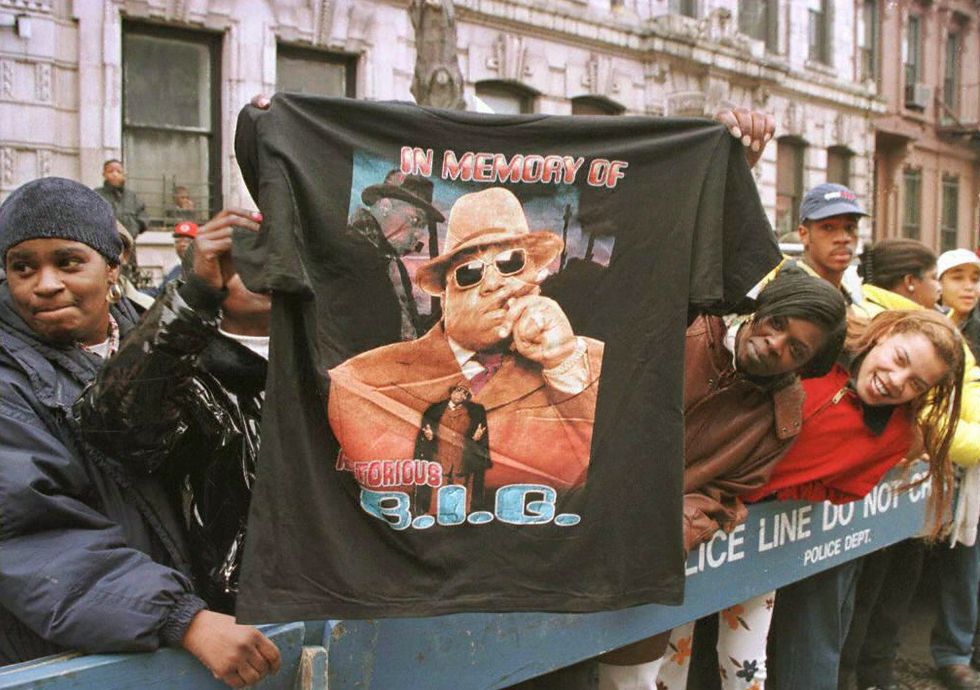 A man displays a t-shirt tribute to Smalls on March 18, 1997, as friends and fans lined the funeral procession route through his old neighborhood in Brooklyn; Photo: JON LEVY/AFP via Getty Images

In his music, Smalls exalted the excesses a life of crime could provide but was lyrically gifted enough to counter such notions by also revealing the downside to such behavior on songs “Suicidal Thoughts” and “Everyday Struggle” which, according to Smalls, was a real account of a drug-selling expedition. Though his success was growing, Smalls reportedly returned to drug dealing in order to make more money following the birth of daughter T’yanna. Upon finding out, Combs is said to have tried to make him stop.

“Every true hustler knows that you cannot hustle forever,” Smalls told Rolling Stone at the time. “You will go to jail eventually. If the police or feds aren’t on you, the n***** on the street are on you.”

Drawn into the East Coast-West Coast hip-hop rivalry following the success of Ready to Die, Smalls came to represent the East Coast alongside Bad Boy Records, while rapper and former friend Tupac Shakur and Los Angeles-based Death Row Records were the West Coast, with both sides taking subliminal and blunt digs against the other in music releases, videos and interviews. On September 7, 1996, Shakur was fatally shot in a drive-by shooting in Las Vegas, Nevada, and no culprit was apprehended, and rumors circulated that Smalls was somehow implicated in the death due to the ongoing feud, rumors Smalls refuted.

On March 9, 1997, in Los Angeles, Smalls left a Soul Train Music Awards after-party early in the morning to return to his hotel. While stopped at a red light, a black car pulled alongside the vehicle in which Smalls was traveling and the rapper was shot four times with a pistol brandished from the parallel car. Rushed to Cedars-Sinai Medical Center he was pronounced dead at 1:15 a.m. The murder case remains unsolved.

Sixteen days after his death, his two-disc second album — eerily titled Life After Death — was released as planned. Reaching No. 1 on the Billboard 200 chart, it included the hit songs “Hypnotize” and “Mo Money Mo Problems.” As influential in death as in life, Smalls' lyrics would be sampled by artists as diverse as Jay-Z, Alicia Keys, Michael Jackson, Usher and Lil Wayne.