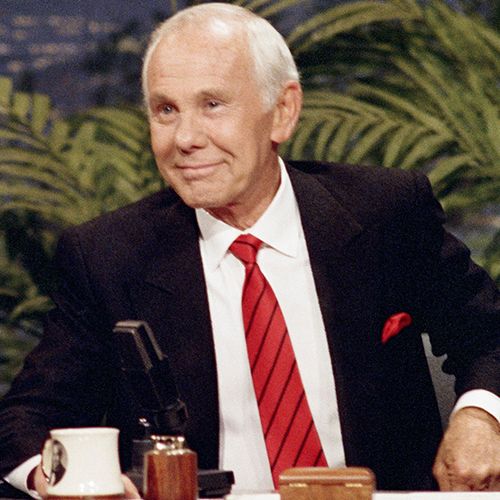 Who Was Johnny Carson?

After college, comedian Johnny Carson worked as a television writer for Red Skelton's show. He moved to New York City and in 1962, Carson replaced Jack Paar as host of The Tonight Show for an Emmy Award-winning run that lasted three decades. Carson's 1992 final appearance as host attracted an estimated 50 million viewers. He died in 2005.

Born in Corning, Iowa, on October 23, 1925, to Ruth and Homer R. Carson, a power company manager, Johnny Carson learned how to reel in audiences at a young age. He fell in love with magic when he was 12 years old, and after purchasing a magician's kit through the mail, he began performing magic tricks in public, as "The Great Carsoni."

Following high school, in 1943, an 18-year-old Carson joined the U.S. Navy as an ensign and then decoded encrypted messages as a communications officer. Serving aboard the USS Pennsylvania, he continued performing magic, mainly for his fellow shipmates. He later said that one of the fondest memories from his service was performing magic for James Forrestal, the U.S. Secretary of the Navy. Though assigned to combat in the summer of 1945, Carson never went into battle — WWII ended in 1945, following the bombing of Hiroshima and Nagasaki in Japan, and Carson was sent back to the United States.

In the fall of 1945, Carson began studying at the University of Nebraska, and received a bachelor's degree in radio and speech four years later. After college, he had a short stint as a television writer for The Red Skelton Show in Los Angeles, and then moved to New York City in pursuit of bigger audiences.

Audiences found comfort in Carson’s calm and steady presence in their living rooms each evening. Revered for his affable personality, quick wit and crisp interviews, he guided viewers into the late-night hours with a familiarity they grew to rely on year after year. Featuring interviews with the stars of the latest Hollywood movies or the hottest bands, Carson kept Americans up-to-date on popular culture, and reflected some of the most distinguished personalities of his era through impersonations, including his classic take on President Ronald Reagan. Carson created several recurring comedic characters that popped up regularly on his show, including Carnac the Magnificent, an Eastern psychic who was said to know the answers to all kinds of baffling questions. In these skits, Carson would wear a colorful cape and featured turban and attempt to answer questions on cards before even opening their sealed envelopes. Carson, as Carnac, would demand silence before answering questions such as "Answer: Flypaper." "Question: What do you use to gift wrap a zipper?"

Carson was The Tonight Show's host for three decades. During that time, he received six Emmy Awards, a Peabody Award and the Presidential Medal of Freedom. Carson's final appearance as host in 1992 attracted an estimated 50 million viewers.

Carson was in and out of relationships throughout his life, marrying four separate times. He married Jody Wolcott in 1948, and they had three sons.

Carson and Jody divorced in 1963, and only months later, Carson married his second wife, Joanne Copeland. That relationship ended in 1972, following a grueling legal battle that ended with Copeland receiving a settlement of nearly $500,000 and annual alimony from Carson. That same year, Carson married third wife Joanna Holland—from whom he filed for divorce in 1983.

For the first time in 35 years, Carson lived life as an unmarried man from 1983 to 1987. He married for the final time in June 1987; Carson and Alexis Maas remained together until Carson's death, nearly eighteen years later.

In 1999, Carson suffered a severe heart attack at the age of 74 while he was sleeping in his Malibu, California home. Soon after, he underwent quadruple-bypass surgery. In January 2005, at age 79, Carson died of respiratory failure caused by emphysema.

Carson, considered to be one of the most popular stars of American television, has been praised by several mainstream comics—including Jerry Seinfeld, Jay Leno and Jimmy Fallon—for helping them launch their careers. Today, he is regarded worldwide as a television legacy.