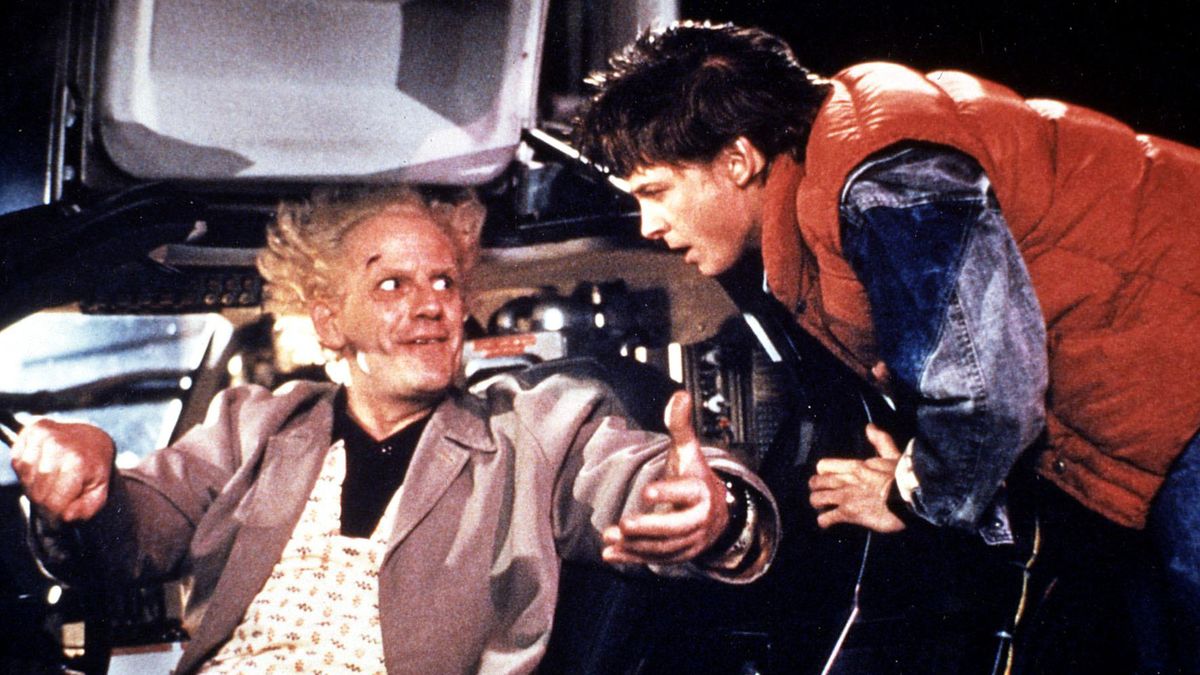 On October 26, 1985, Marty McFly stepped into Doc Brown’s souped-up DeLorean and launched one of Hollywood’s most beloved series. But it was a rocky road from page to screen for the sci-fi classic, which included the assistance of a legendary director as well as an infamous firing. Here are 10 things you may not know about the Back to the Future trilogy, starring Michael J. Fox and Christopher Lloyd:

Robert Zemeckis and Bob Gale met as students at USC’s fabled film school in the early 1970s. The “two Bobs” grew close, bonding over their mutual love for old-style, Hollywood big epics in an era more known for its auteur directing style. The pair briefly worked as a television writing team but ditched the high-paying gig to devote themselves to movies, including an idea for a time-travel film. But they struggled to find the hook that they needed for the story.

Instead, they worked on the first two films Zemeckis directed, which both bombed at the box office. Shortly after the release of the second film, Gale visited his family in St. Louis and found himself looking at his father’s high school yearbook. Noting how different he seemed from his class president father, he wondered how the two would have gotten along in high school, planting the seed for the movie’s family dynamics storyline.

Steven Spielberg helped get the first film made.

Steven Spielberg had met Zemeckis and Gale after giving a presentation at USC and became a mentor to the team. He’d executive produced Zemeckis’ first two films and directed a script they co-wrote, the WWII-era comedy 1941, which was Spielberg’s first critical and commercial flop. But Spielberg remained supportive of the pair and showed an early interest in their time-travel film. The rest of Hollywood did not, and the film was famously turned down by every studio, multiple times. In an era when comedies with teen leads leaned towards raunchy, studio heads thought the script was too soft and sweet, while Disney execs rejected it because of the hint of the possibility of an incestuous romance between Marty and his mother during the 1950s period.

Spielberg offered to set the film up at Amblin, his new production company at Universal Pictures, where he had a close relationship with exec Sid Sheinberg. After Zemeckis finally had a directorial hit with Romancing the Stone, the deal fell into place, with Zemeckis directing the film, co-written by the two Bobs, and Spielberg as executive producer. It was Spielberg who, during pre-production, shot down several of Universal’s suggestions, including renaming the film Space Man from Pluto. 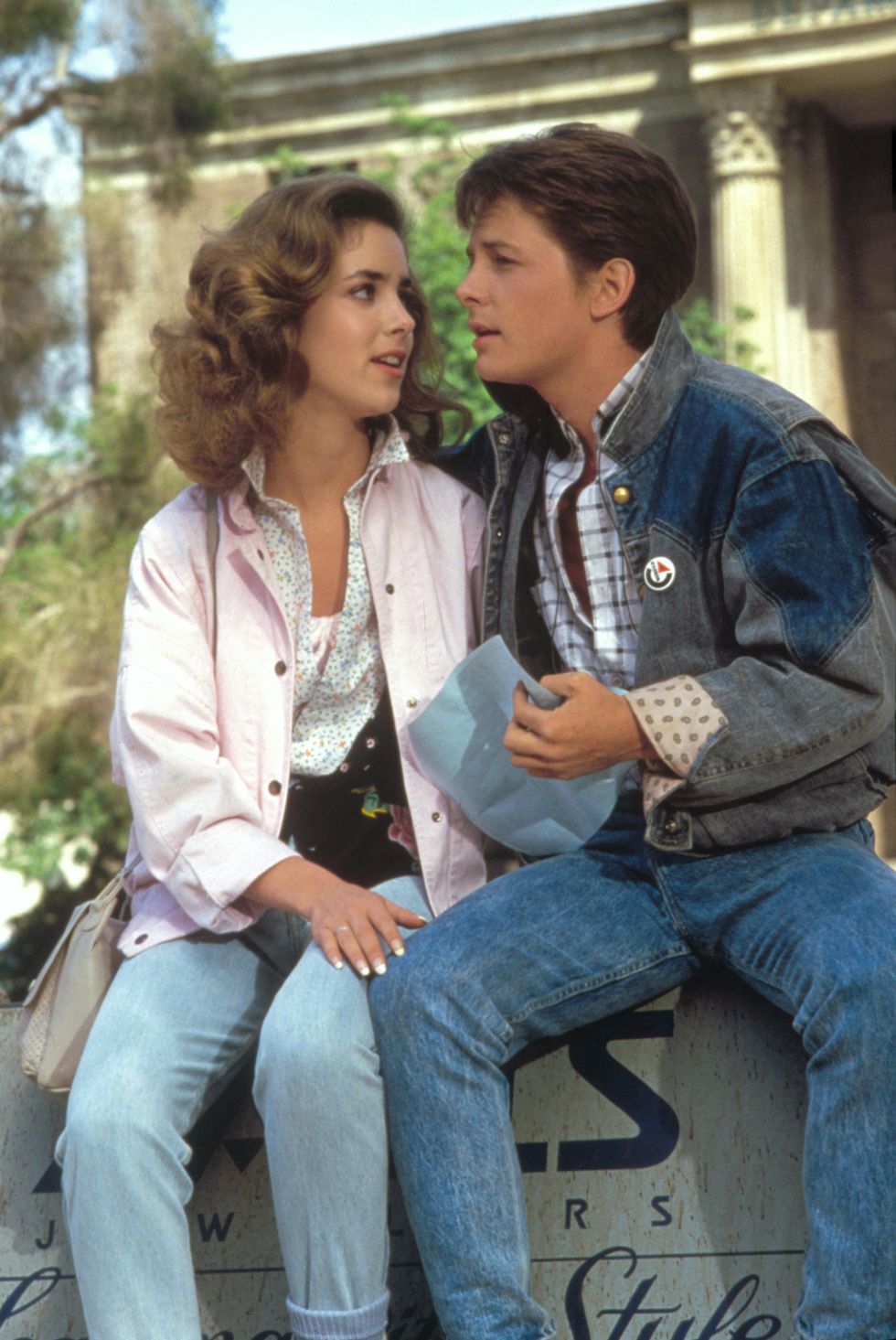 Claudia Wells as Jennifer Parker and Michael J. Fox as Marty McFly on the set of "Back to the Future"
Photo: Sunset Boulevard/Corbis via Getty Images

The films never explained how Marty and Doc Brown met

But the filmmakers definitely had a backstory for how the famed duo came together. In 2011, Gale told Mental Floss that they first met after a younger teenaged Marty, intrigued by stories he’d heard about the mysterious and possibly dangerous inventor, broke into Doc’s lab. Doc caught him in the act but was tickled when Marty professed his interest in Doc’s work and gave him a part-time job helping with his experiments.

But the Doc Brown that came to screen was different on the page. He was called Professor Brown in the first scripts, and instead of Einstein the dog, he had a chimpanzee companion named Shemp. Universal insisted on changing both, telling the producers that no film with a chimp had ever made any money.

The DeLorean wasn’t in the original script either

One of the most famous cars in Hollywood history was the result of production problems. In the original script, Doc used a refrigerator on the back of a pick-up truck as his time machine. But the idea of Doc moving around the bulky machine became an issue until Zemeckis came up with the idea of putting the time machine inside of a car. The choice of using a DeLorean was a bit of a joke amongst the producers, as the high-flying car designer had recently been arrested on drug charges and the company would soon declare bankruptcy.

The car used in the film broke down frequently, but producers refused to change it, even after a last-minute sponsorship offer Ford Motors to change it to a Mustang. Whether John DeLorean was in on the joke of using his famously unreliable car or not, he was a fan, even writing Gale a thank you note. More than 20 years later, Spielberg and George Lucas would use the idea of a super-refrigerator during a much-maligned sequence in Indiana Jones and the Kingdom of the Crystal Skull.

Zemeckis and Gale’s first choice for the role of Marty McFly was Family Ties star Fox. But when they approached the show’s producers to see if they could change their production schedule to allow them to cast Fox, they refused. A number of other actors were considered, including Johnny Depp. Universal execs pushed for actor Eric Stoltz, going so far as agreeing to let the producers recast the role if he didn’t work out. It was obvious to the producers within weeks that they had made a mistake. Stolz, fresh from a turn in the dark drama Mask, brought a brooding intensity to a comedic film. He insisted that the cast and crew call him “Marty” at all times to help him stay in character, and he clashed with some of the cast and crew, especially Tom Wilson, who played Biff Tannen.

The producers held Universal to their word and began desperately searching for a possible replacement. They approached Family Ties producers again, and because star Meredith Baxter Birney’s pregnancy had led to a change in the show’s production schedule, they allowed Zemeckis and Gale to offer the role to Fox, who jumped at the chance. While the deal was being hammered out, Stolz was seemingly a dead man walking on the set, as the crew, unaware of what was going on, was told to film around him for several key scenes until Stoltz and the rest of the cast were finally told he’d been dismissed.

Fox did double duty during filming for the first movie

Because filming on Family Ties overlapped with Back to the Future for three months, Fox had a grueling schedule. He filmed the TV show during the day before rushing to the BTTF set to film until just before dawn. As he noted in his 2003 memoir, “At that point, I’d climb into the back of a production van with a pillow and a blanket, and yet another driver would take me home again — sometimes literally carrying me into my apartment and dropping me into my bed. I’d catch two or three hours sleep before teamster driver number one would reappear at my apartment, let himself in with a key I’d provided, brew a pot of coffee, turn on the shower, and then rouse me to start the whole process all over again.”

The producers themselves came under the gun after filming wrapped. When early previews proved promising, Universal moved up the film’s release from late August to July, leaving just nine weeks from the end of production to opening day. They rushed to finish editing the film, which actually contained fewer than three dozen special effects shots.

The mercurial actor, who played Marty’s dad, George, had clashed with Zemeckis during the filming of the first movie and was reportedly angry with the film’s ending. He insisted on a pay raise for the sequels, then balked at what he considered the insufficient increase from producers. Zemeckis and Gale decided to use footage of Glover from the first film in the sequels, while also casting a new actor wearing prosthetics to look like Glover for a few new shots. Glover sued the producers who eventually settled with him for more than $500,000. The lawsuit also led to a change in union rules for the Screen Actors Guild, regarding the use of an actor’s likeness without proper compensation.

The alternate version of 1985 Hill Valley that Doc and Marty return to in Back to the Future Part II is much changed. There’s a headline in the fictitious Hill Valley Telegraph newspaper announcing Richard Nixon’s plan to run for a fifth term (the high school used in the original film was Whitter High School, Nixon’s real-life alma mater). The antique store Marty goes to in the film has a window chock-full of '80s goodies, including an original 1984 Apple computer, a Ronald Reagan record and a talking Roger Rabbit doll, a nod to Who Framed Roger Rabbit, the groundbreaking film Zemeckis directed in between the first and second BTTF films.

And when Doc and Marty travel to 2015, Marty sees a billboard promoting the film Jaws 19, directed by Max Spielberg, the name of Spielberg’s eldest child. In 2015, to celebrate the 30th anniversary of the first film’s premiere, Universal Pictures released a mock trailer for Jaws 19. And the 2015 Café 80s setting includes a video arcade, where Marty encounters two kids playing a game, including a young Elijah Wood, making his screen debut.

The setting for the third film was Fox’s idea

During filming of the first film, Zemeckis had asked Fox which era he’d want to travel back to, with Fox suggested the Wild West. When Zemeckis and Gale began writing the sequel, they included the 19th century setting as the last act in the movie. But they quickly realized that cramming that much storyline in one film was impossible, and decided to spin it off into a third, standalone film.

In a then-unheard-of move, the two sequels were shot back-to-back, with filming stretching nearly a year with just one three-week break in between. During filming of the third movie, Zemeckis would often shoot during the day in Northern California and spend his nights in the editing or dubbing rooms for the second film, 300 miles away in Los Angeles.

The producers are dead set against another BTTF film

With seemingly ever-popular film or TV series seemingly in line for a sequel or a reboot, fans of the trilogy can rest assured that it won’t happen — at least as long as the two Bobs are alive. According to Zemeckis, the original 1984 contracts he and Gale signed with Universal Pictures and Spielberg’s Amblin Entertainment give them the final say on any future films. “That can’t happen until both Bob and I are dead,” he said. “And then I’m sure they’ll do it, unless there’s a way our estates can stop it."

Gale is equally adamant, particularly considering Fox’s Parkinson diagnosis, which has significantly curtailed his acting in recent years. “The idea of making another Back to the Future movie without Michael J. Fox – you know, that’s like saying, ‘I’m going to cook you a steak dinner and I’m going to hold the beef,'” Gale said at a 2008 fan convention.

But that doesn’t mean that the pair is finished with the BTTF world entirely. As far back as 2004, the creators were discussing the possibility of Back to the Future as a stage musical. Following a decade of development, the musical was originally supposed to premiere in — naturally — 2015, before being delayed. The musical finally made its bow in March 2020 at the Manchester Opera House, with a book co-written by Zemeckis and Gale and music by Alan Silvestri, the original trilogy’s composer. The show closed prematurely due to the COVID-19 pandemic, but producers have announced a transfer to London’s West End in the fall of 2021.