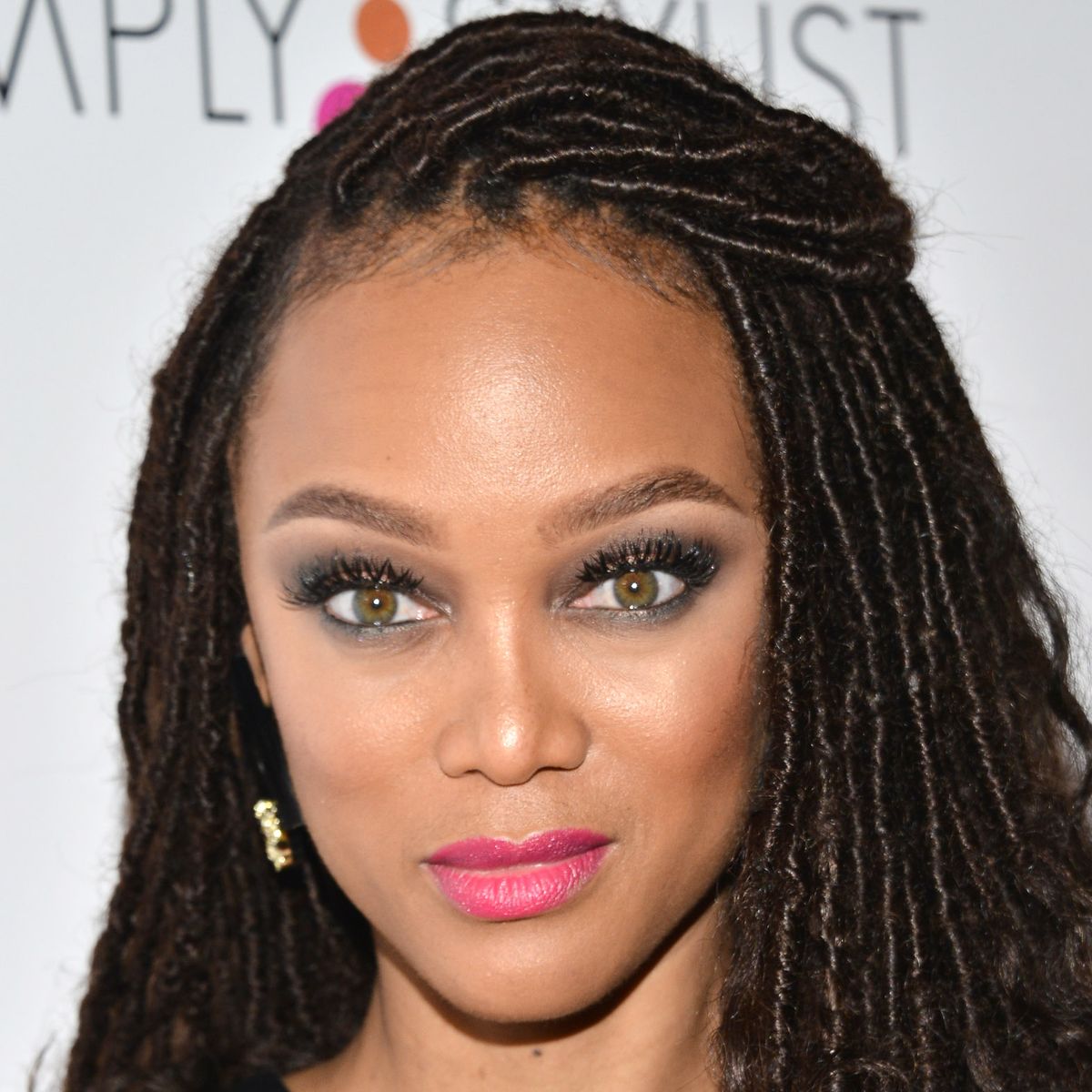 Who Is Tyra Banks?

Tyra Banks was a leading international fashion model and the first Black woman to land on the cover of the Sports Illustrated swimsuit issue. She later hosted the reality TV program America's Next Top Model and her own daytime talk show, for which she won two Emmy Awards. Banks has continued to expand her business interests, launching her own cosmetics line in 2014. Staring in 2017, Banks took over Nick Cannon's hosting duties on America's Got Talent.

Tyra Lynne Banks was born on December 4, 1973, in Inglewood, California. Her father, Don Banks, was a computer consultant and her mother, Carolyn, was a medical photographer. Banks' parents divorced when she was only six years old, but she says that she was too young for the divorce to negatively affect her. "As far as I could see, I had it made," Banks remembers. "I stayed with Mommy on the weekdays and Daddy on the weekends. I had two birthday parties, two Christmases. Double the presents, double the love."

Banks says that she developed a love for food — and not always healthy food — from a very young age, devouring fried chicken, candied yams and pork chops at family gatherings. "I was taught to enjoy food, not to fear it," Banks recalls. She developed healthier habits, too, and began working out with her mother's exercise group at the age of six. After her grandmother passed away from lung cancer, Banks also vowed never to smoke.

Banks confesses that she was somewhat of a "mean girl" in middle school. "I was popular, gossipy," she recalls, adding, "and if I didn't want one of the other girls to be in the clique anymore, for whatever tiny little reason, I voted her out." When Banks attended Immaculate Heart High School in Los Angeles, however, she found herself on the other end of the social food chain. A sudden growth spurt left her tall and gawky, and her classmates gave her cruel nicknames such as "Giraffe" and "Lightbulb Head." "I went from being the popular girl who looked normal, to being considered a freak," Banks remembers. Nevertheless, Banks says that the teasing and abuse taught her the importance of kindness. "It turned out that the best things [to happen to me] in my life were to be made fun of, and to have no friends, and to feel miserable every single day."

By 1989, at the age of 17, Banks had outgrown her awkward phase and begun to resemble the tall, curvy, caramel-skinned and green-eyed beauty who would light up runways and magazine covers for years to come. However, her first attempts to find a modeling agency were met with rejection and discrimination. Banks remembers that one agency said she looked "too ethnic" and another said that it "already had a Black woman and didn't want another."

Signing on With Elite Model Management

In 1990, while still in high school, Banks landed a contract with Elite Model Management, the largest modeling agency in the world. Later that year, she shot her first print piece for Seventeen magazine. After graduating from high school in 1991, Banks enrolled at Loyola Marymount University in Los Angeles, but decided to forego college when Elite offered to send her to Paris for high-fashion runway modeling.

Banks rose swiftly through the ranks of fashion modeling to become one of the world's top supermodels. She booked 25 runway shows while in Paris in 1991, an unprecedented feat for a newcomer to the industry. But by the mid-1990s, Banks began to gain weight, a forbidden sin in the world of rail-thin clothing models. Unwilling to starve herself to achieve the desired physique for high-fashion models, Banks decided to return to the United States and switch to swimwear and lingerie modeling, where curvier models are more welcome. "I made my living being 20 or 30 pounds heavier than the average model," Banks says. "And that's where I got famous. Victoria's Secret said I sold more bras and panties than anybody else, and I was traipsing down that runway with 30 pounds more booty than the other girls."

In 1996, Banks became the first Black woman to appear on the cover of GQ. A year later, she became the first African American woman to appear on the cover of the Sports Illustrated swimsuit edition, as well as the first Black woman to be featured in Victoria's Secret lingerie catalogue. She signed lucrative contracts with Cover Girl and Victoria's Secret, becoming a staple of both companies' advertising campaigns and runway shows. Named to People magazine's 50 Most Beautiful People list numerous times, Banks received the prestigious Michael Award for Supermodel of the Year in 1997, and also won two Teen Choice Awards for Favorite Supermodel.

Banks returned to the front of the Sports Illustrated swimsuit edition in 2019, 23 years after she first graced its cover.

In addition to her modeling, Banks began pursuing an acting career in the 1990s. She made her debut in 1993 with a seven-episode stint on The Fresh Prince of Bel-Air, and enjoyed a prominent role in the 1995 drama Higher Learning. In 2000 Banks appeared in a trio of popular films: Love & Basketball, Coyote Ugly and the made-for-television movie Life Size. Later TV work included appearances in Gossip Girl and Glee.

In 2003 Banks ventured into the world of reality TV when she created, produced and hosted the UPN show America's Next Top Model. The show, which pits aspiring models against each other in a competition for the label of America's Next Top Model, was UPN's highest-rated show through its first six seasons. In 2006 Top Model was chosen to headline the newly created CW television network. The show, with more than 20 seasons under its belt, continues to draw enormous television audiences.

Banks expanded into daytime television with her own talk show, The Tyra Show, in 2005. The show's most famous moment came in February 2007, shortly after several unflattering pictures of Banks in a bathing suit surfaced in tabloid magazines. Banks marched onstage wearing the same bathing suit and told critics to "Kiss my fat ass!" She picked up a Daytime Emmy Award for her work on the show in 2008 — a feat she repeated the following year as well. In 2010 Banks said goodbye to her talk show after five years on the air. She told People magazine that she decided to end her program to focus on "bringing positive images of women to the big screen."

Banks debuted a new talk show in September 2015 called FABLife, though she announced her departure just two months later. She later resurfaced to host the reality competition series America's Got Talent in 2017, as a replacement for Nick Cannon, and spent two seasons in the role.

'Dancing with the Stars'

Banks took over hosting duties from Tom Bergeron and Erin Andrews for the 29th season of Dancing with the Stars. She also served as executive producer.

In 2011 Banks published the best-selling novel Modelland, based on her life and experiences in the industry, and launched a style and beauty website called typeF.com. She also enrolled at Harvard Business School around this time, completing her special course for CEOs and other top executives in early 2012. The model-turned-entertainment-mogul has since founded the TYRA Beauty cosmetics line.

Banks, who rarely discusses her romantic life in public, has been involved with several celebrities over the years, including director John Singleton and basketball player Chris Webber. In January 2016, Banks and her long-time boyfriend, Norwegian photographer Erik Asla, welcomed a baby boy, York Banks Asla. Banks had previously revealed her trouble with infertility and their son was delivered via a surrogate mother. In 2017, Banks and Asla called off their five-year relationship on amicable terms.

Banks is active in a number of social and charitable causes. One of her personal missions has been to help young women deal with self-esteem issues. As early as 1992, when she was only 19 years old, Banks funded a scholarship to help young Black women attend her alma mater, the private Immaculate Heart High School in Los Angeles. In 1998, she wrote Tyra's Beauty Inside & Out, a book aimed at inspiring young women, and a year later she founded TZONE, a foundation aimed at developing teenage girls' independence and self-esteem.