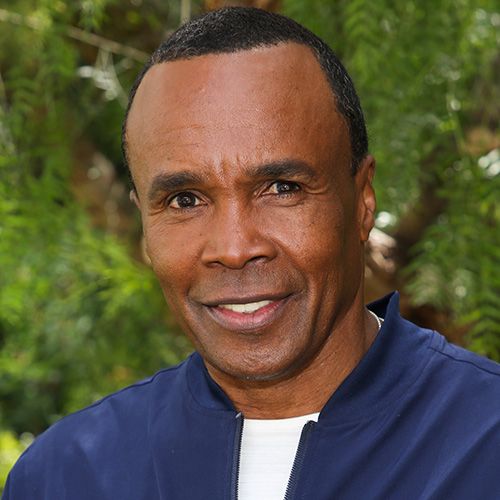 Who Is Sugar Ray Leonard?

Sugar Ray Leonard is a former American professional boxer. He won the gold medal in light-welterweight boxing at the 1976 Olympic Games and went pro the following year. His 1987 defeat of "Marvelous" Marvin Hagler for the World Boxing Council's middleweight title is considered one of the greatest professional boxing matches of all time. Leonard retired in 1997 with a record of 36-3-1 and was inducted into the Boxing Hall of Fame.

One of boxing's most beloved and successful fighters, Sugar Ray Leonard was born Ray Charles Leonard on May 17, 1956, in Wilmington, North Carolina. The fifth of Gertha and Cicero Leonard's seven children, he was named after his mother's favorite singer, Ray Charles.

When Leonard was 3 years old, he and his family moved to Washington, D.C. Seven years later, they relocated to a permanent home in Palmer Park, Maryland. Leonard grew up in a loving home, where finances were often tight. His father earned a living as a night manager at a supermarket, while Gertha worked as a nurse.

For Leonard, life was often tough—as a child, he witnessed lives around him wasted by crime and violence. Several of his high school peers died due to violent crimes; many others were sent to prison. Leonard, however, was determined not to succumb to his surroundings.

As an athlete, Leonard was only marginal at team sports. His two older brothers, who had begun to dabble in boxing, convinced him to visit the Palmer Park Community Center (their local recreation center) and strap on some gloves. His life would never be the same again.

Leonard soon became obsessed with boxing, and with perfecting his skills in the sport. "For some reason, I wanted it to so bad," he told Sports Illustrated in 1979. "I felt it in me, and I had to keep going."

Leonard was quick and deft. More importantly, he was eager to learn. In 1973, the fruits of his labor started to pay off. He won the National Golden Gloves that year, and a year later, he was crowned the national Amateur Athletic Union champion.

"When I first started, I used to fight like Joe Frazier," Leonard once said. "I would come in low, bob and weave, and I knocked out many guys like that. I straightened out when I saw Muhammad Ali, when I started studying Sugar Ray Robinson." Leonard's reverence for Robinson ran so deep that he eventually took the nickname "Sugar Ray," which stuck.

Over the course of his successful amateur career, Leonard won three National Golden Gloves titles, two AAU championships and the 1975 Pan American title. At the 1976 Olympic Games in Montreal, Canada, he vaulted to celebrity status by overcoming severe hand injuries to win the gold medal in the light-welterweight (139-pound) division.

Leonard had no plans for becoming a professional boxer; he had hoped to cash in on his Olympic success, and never step back in the ring again. But family strains, including both of his parents becoming ill, forced his hand, and not long after the Olympics, he started fighting again.

As a pro, Leonard matched the same success he'd had as an amateur fighter. In November 1979, he won the World Boxing Council's welterweight title, and over the next decade, he fought in some of boxing's most memorable bouts, winning nearly all of them. His victories included wins over Roberto Duran and Thomas Hearns.

Leonard retired in 1984, but a few years later, in 1987, stepped back into the ring to upset "Marvelous" Marvin Hagler for the middleweight crown. To this day, the 1987 Leonard-Hagler bout is widely considered one of the greatest fights in boxing history.

Leonard retired from boxing for good in 1997, finishing his pro boxing career with a 36-3-1 record and 25 knockouts. Later that year, he was inducted into the International Boxing Hall of Fame.

In 2011, Leonard performed on the hit ABC show Dancing with the Stars (season 12), competing against Ralph Macchio, Wendy Williams and Hines Ward, among several other celebrities. That same year, he published his memoir The Big Fight: My Life In and Out of the Ring. He is also active in philanthropy through the Sugar Ray Leonard Foundation, which he established in 2009 with his wife Bernadette. The organization raises funds for juvenile diabetes research and promotes awareness about the medical condition.