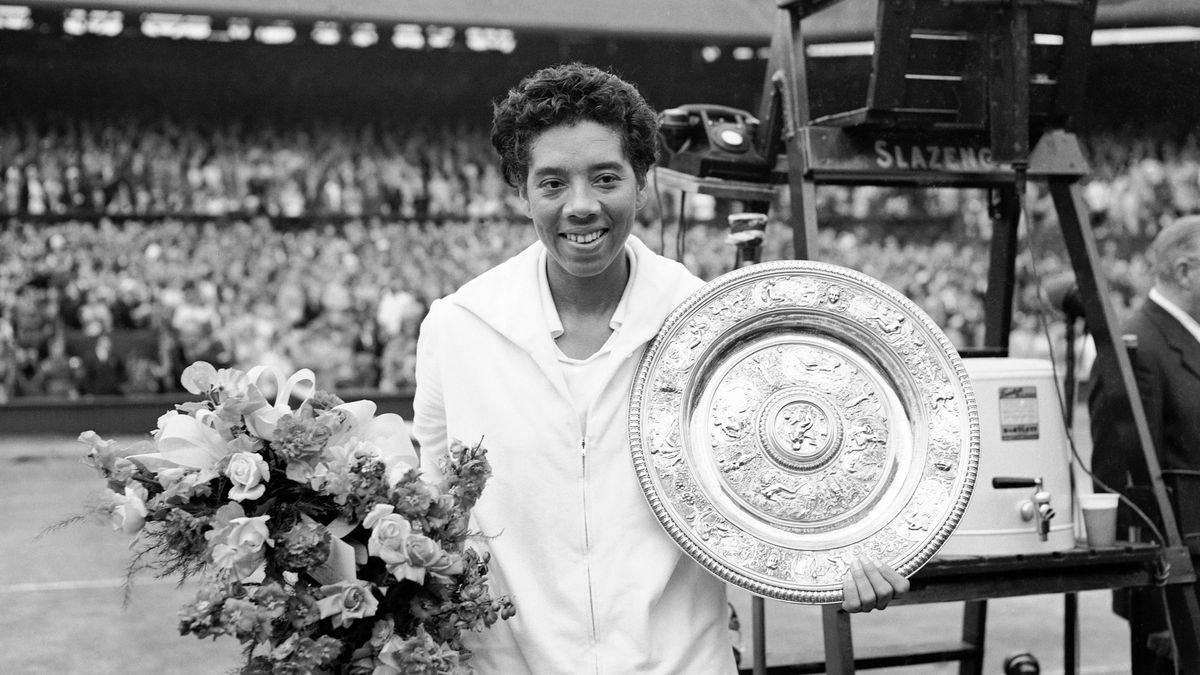 On August 28, 1950, a 23-year-old Althea Gibson set foot on one of the outer courts of the West Side Tennis Club in Forest Hills, Queens, home of the U.S. National Championships.

It wasn't the first time a Black player was competing in an event sanctioned by the United States Lawn Tennis Association (USLTA) — that honor technically went to Reginald Weir at the 1946 Eastern Indoor Tournament.

But it marked the first time a Black player was allowed to compete against the top players in the sport at one of its premier championships, and Gibson was about to show the white tennis world what it had been missing for all these years.

Gibson was introduced to tennis as a troubled but athletic teenager

Gibson was born on August 25, 1927, in the small town of Silver, South Carolina, but knew virtually nothing of her father's sharecropping life after moving to New York City's Harlem approximately three years later.

As she confessed in her 1958 autobiography, I Always Wanted to Be Somebody, Gibson was a "wild, arrogant girl" who hated school and was more than capable of defending herself with her fists.

She was also a superb athlete, and after quickly mastering paddle tennis, an offshoot of the regular racket-and-ball game, a Police Athletic League supervisor introduced the 13-year-old to the local network of competitive tennis players.

Gibson fell under the tutelage of Fred Johnson, a one-armed pro at Harlem's Cosmopolitan Tennis Club, and began competing on the almost entirely Black American Tennis Association (ATA) circuit. Already nearly six feet tall, the lanky teen overwhelmed more experienced players with her raw power, although she also rubbed many of them the wrong way with her unsportsmanlike attitude.

Gibson's loss at the 1946 ATA championships in Wilberforce, Ohio, gave her critics the opportunity to vent their frustrations. But it also provided exposure to a pair of tennis-playing physicians from the South, who took charge of the prodigy's development from there. 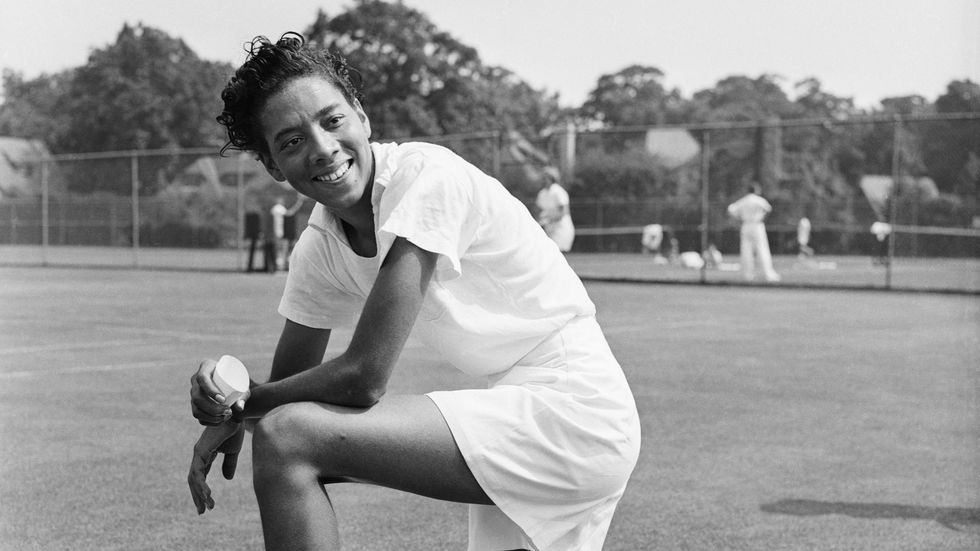 She improved her game and attitude while training away from home

In late summer 1946, Gibson moved into the home of Dr. Hubert Eaton in Wilmington, North Carolina, where she resumed her high school studies and practiced on her host's backyard court. After the school year finished, she moved to Lynchburg, Virginia, to spend the summer with Dr. Robert W. Johnson.

The year-round supervision transformed her into a more disciplined young woman, while also giving her the opportunity to continually improve her court skills. In summer 1947, she won the first of what turned out to be 10 consecutive ATA women's championships.

In early 1949, after the door was cracked open for Weir, Gibson was also extended an offer to compete in the Eastern Indoor Tournament in her old backyard of Harlem. She played well enough to reach the quarterfinals, but for Eaton and Johnson, as well as the rest of ATA brain trust, this generational talent was just scratching the surface of what she could accomplish.

An American tennis champ rose to her defense

After Gibson competed in the Eastern Indoors for the second year in a row in 1950, her ATA backers sought to negotiate her way into the flagship event of American tennis. According to Sports Illustrated, USLTA leaders were receptive to the idea of Gibson integrating the U.S. Nationals, provided she first prove her capabilities against "first-class players" in other tournaments.

The problem with that arrangement was that no tournament, beyond those governed by the ATA, was willing to let her through the gate. It took a searing editorial from former American champion Alice Marble, published in the July 1 issue of American Lawn Tennis Magazine, to call proper attention to this Catch-22:

"If Althea Gibson represents a challenge to the present crop of women players, it's only fair that they should meet that challenge on the courts, where tennis is played," Marble wrote. "But if she is refused a chance to succeed or to fail, then there is an uneradicable mark against a game to which I have devoted most my life, and I would be bitterly ashamed."

The pointed words got through to a few ears, and Gibson was granted entry into the National Clay Court Championships in Chicago and then the Eastern Grass Court Tournament in New Jersey. Shortly afterward, while in Wilberforce to claim her fourth straight ATA title, she learned of her acceptance into the U.S. Nationals field.

Gibson cruised to an easy victory over Barbara Knapp in her Nationals debut, but it was her follow-up match against reigning Wimbledon champion Louise Brough that truly announced her arrival as a force to be reckoned with.

Shaking off her early jitters, Gibson gained control of her powerful strokes and took a 7-6 lead in the final set to put the tiring champ on the ropes. However, the darkening sky suddenly unleashed a violent thunderstorm, halting the match until the next day. Her energy and composure refreshed, Brough quickly won three straight games to seal the match.

If not entirely welcomed by the spectators — ATA executive secretary Bertram Baker later recalled shouts of "Beat the n*****" in the stands — Gibson's performance still won over plenty of fans, including David Eisenberg of the New York Journal-American.

"I have sat in on many dramatic moments in sports," Eisenberg wrote, "but few were more thrilling than Miss Gibson's performance against Miss Brough. Not because great tennis was played. It wasn't. But because of the great try by this lonely, and nervous, colored girl, and because of the manner in which the elements robbed her of her great triumph."

More progress came when Gibson became the first Black player to compete in — and win — the 1951 Good Neighbor Championships in Miami. That summer, she integrated the hallowed grounds of Wimbledon at the All England Lawn Tennis and Croquet Club, again delivering a promising showing before bowing out in the third round.

However, she wasn't improving quickly enough for those who expected a rapid climb to the top of the world rankings. Even would-be allies in the Black press were unsparing in their criticism, with Jet magazine calling her "The Biggest Disappointment in Tennis."

Gibson's issues with the Black media stemmed in part from her perceived responsibilities to society, with the athlete preferring to let her racket do the talking in lieu of a defiant stance against the injustices she faced.

"I have never regarded myself as a crusader. I try to do the best I can in every situation I find myself in, and naturally I'm glad when something I do turns out to be helpful and important to all Negroes — or, for that matter, to all Americans," she wrote in her autobiography. "But I don't consciously beat the drums for any special cause, not even the cause of the Negro in the United States, because I feel that our best chance to advance is to prove ourselves as individuals."

Worried about her financial future in a sport that limited tournament participation to amateurs, Gibson applied to the Women's Army Corps in 1955. However, her plans changed when she was chosen to represent the U.S. State Department on a tour of Southeast Asia later that year, an experience that exposed her to crowds that cheered her tennis exhibitions and revived her spirit to continue pushing to become the best in the game.

She became the first Black player to win the French, Wimbledon and U.S. titles

Gibson began 1956 on a roll, winning 16 of her first 18 tournaments. Among the victories was a groundbreaking triumph at the French championship, making Gibson the first Black tennis player — man or woman — to win one of the four major singles titles.

Gibson was unable to carry the momentum into Wimbledon, however, as she suffered a disappointing loss to Shirley Fry in the quarterfinals before rebounding to win the doubles title. Furthermore, her presence still seemed to turn off many fans, with Scottie Hall of the Sunday Graphic observing the "unspoken, unexpressed but anti-Gibson atmosphere" that surrounded her matches.

Whatever internal or external obstacles remained, Gibson was determined to push past them in 1957. She arrived rested and loose at Wimbledon that June, and this time there was no stopping the drive that culminated with a straight-set win over Darlene Hard for the women's singles championship.

One year after enduring a frosty reception from the London crowd, the Harlem girl found herself accepting its grand prize from Queen Elizabeth II and earning a rousing ovation as the queen of the Wimbledon ball.

The party continued back in New York City, where Gibson became just the second Black American to be honored with a ticker-tape parade, after Jesse Owens in 1936. She went on to finally win the U.S. Nationals in September, before closing out the year as the first member of her race to claim the sport's No. 1 ranking.

Still worried about her finances, Gibson decided to turn professional after winning Wimbledon and the U.S. Nationals again in 1959 to maximize her earning power at the height of her fame.

That year she delivered an album, Althea Gibson Sings, and appeared in the film The Horse Soldiers, though both turned out to be one-off ventures into those respective fields. She also signed a lucrative contract to play matches before or during halftime of Harlem Globetrotters basketball games, but promptly lost much of that money after attempting her own ill-fated professional tour.

Seeking a new challenge and another route to financial stability, Gibson began pursuing a golf career in the early 1960s. Once again, she made history by becoming the first Black player on the Ladies Professional Golf Association (LPGA) tour. And while her natural power and athleticism kept her competitive, she never ascended to the top levels of the sport.

The erstwhile tennis champ also returned to her old sport at the end of the decade, with the rules changed to allow professionals to compete alongside amateurs for tournament payouts. But by then she had lost too much ground to the next wave of young, elite talent.

Her legacy lives on through the Black champions that followed

In her later years, friends noted that Gibson seemed increasingly bitter about the lack of opportunities that accompanied her career, as many of her old peers had cashed in on touring or teaching offers that rarely crossed her radar. "Suddenly it dawned on me that my triumphs had not destroyed the racial barriers once and for all, as I had — perhaps naively — hoped," she once wrote. "Or if I did destroy them, they had been erected behind me again."

Indeed, the doors remained stubbornly shut for those who looked like Gibson and hoped to follow in her footsteps. Arthur Ashe became the next Black player to win a major title, at the U.S. Open in 1968, but it would be another 31 years before Serena Williams emerged victorious at a Grand Slam.

Gibson at least lived long enough to see Serena and her sister, Venus, pick up the torch to become the next great Black champions. And while proper recognition from the American tennis establishment was slow to arrive, her statue now overlooks the U.S. Open’s newer home across Flushing Meadows Park in Queens—a reminder of both her impressive record against the best in the world of her time, and the mountains she had to move just to earn that opportunity.