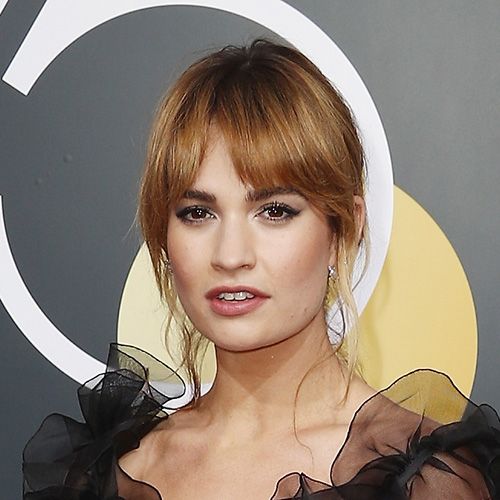 Who Is Lily James?

Lily James is an English film, television and stage actress whose breakthrough role in the fantasy film Cinderella (2015) put her on the map as an up-and-coming actress in Hollywood. Prior to Cinderella, she began receiving plenty of notice on television in her supporting role as rebellious Lady Rose MacClare in the period drama Downton Abbey. James has since starred in big budget films such as Baby Driver (2017), Darkest Hour (2017) and Mamma Mia! Here We Go Again (2018).

Lily James was born on April 5, 1989, in Esher, Surrey, England. Her love for acting was built in her genes: both her parents, Ninette and James, were actors, as well as her grandmother Helen Horton, who voiced Mother, the computer mainframe in Ridley Scott's 1979 film Alien.

"I want to go back to study her more as she did so much, a lot of television, and she’s in Superman," James said of her grandmother. "I remember watching it when I was growing up. I wish I’d seen her on stage: she did a lot of theatre.”

After finishing her studies at Tring Park School for the Performing Arts, James went on to graduate from London's Guildhall School of Music and Drama in 2010.

It didn't take long for James to capture the attention of casting directors. Her television debut started in 2010, playing the character Ethel Brown on the BBC One's series Just William. She followed up with a recurring role in Secret Diary of a Call Girl before she landed international exposure in 2012 with her supporting role as Lady Rose, the Crawleys' flirty, rebellious cousin, in Downton Abbey. James' role was expanded to a series regular for the fourth and fifth seasons. Around the same time she starred in the sports film Fast Girls (2011) and the adventure fantasy film Wrath of the Titans (2012).

But it was in 2015 that James captured her biggest and most financially successful film to date, playing the titular role in Disney's fantasy drama Cinderella (2015), opposite Cate Blanchett and directed by Kenneth Branagh. The film was a smash hit at the box office, earning over $540 million worldwide and becoming the twelfth highest-grossing movie of the year.

In 2016 James returned to television portray Leo Tolstoy's fictional character Natasha Rostova in the BBC adaptation of War & Peace. On the big screen she starred in the war-romance drama The Exception (2016) and also nabbed her second leading role as Elizabeth Bennett in Pride and Prejudice and Zombies (2016) — which also starred her boyfriend Matt Smith — but it earned mediocre sales at the box office.

James' film projects fared better in 2017, as she played the main squeeze of the title character in Baby Driver and featured prominently in the Winston Churchill war drama Darkest Hour. The following year she showcased her singing and dancing chops in the popular jukebox musical sequel Mamma Mia! Here We Go Again.

To add to her leading lady roles, James was asked to star in the historical dramedy The Guernsey Literary and Potato Peel Pie Society (2018), which she turned down at first.

“I was just about to start a Second World War film The Exception, and I felt like I wanted to move out of doing period dramas, or at least try to explore different avenues,” she confessed.

But it was the opportunity to work with Four Weddings and a Funeral’s director Mike Newell that made her reconsider. Thankfully, for her sake, the script was brought to her again, and this time, she decided to go for it, playing the strong-willed heroine and writer Juliet.

James went on to co-star with Tessa Thompson in the modern feminist Western Little Woods, which earned its theatrical release in 2019. Shortly afterward it was back to light-hearted musical-type fare with the Beatles-inspired Yesterday.

James' professional theatre debut was in 2011's stage adaptation of DBC Pierre's novel Vernon God Little. She went on to perform in productions of The Seagull and Othello, the latter for which she received critical praise as Desdemona. Other plays include Play House, Definitely the Bahamas and Branagh's 2016 production of Romeo and Juliet.

To honor her father, James Thompson, who died in 2008 from cancer, Lily, who was born Lily Chloe Ninette Thomson, changed her surname to "James."

James has been dating Dr. Who and The Crown actor Matt Smith since 2014.