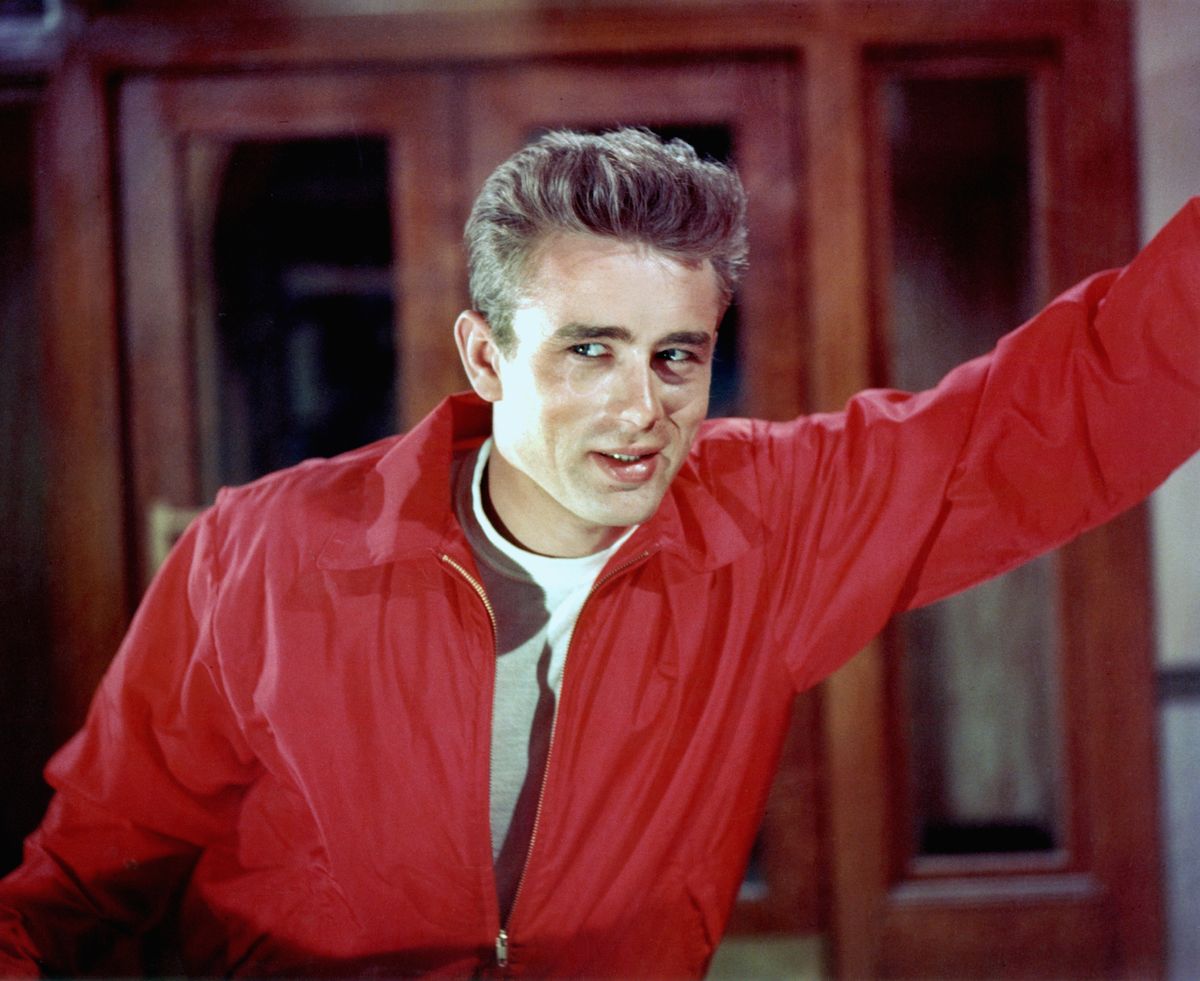 At the time of his sudden death on September 30, 1955, at age 24, James Dean had starred in only one motion picture released in theaters. He would become a cultural icon to generations and a touchstone for the burgeoning youth movement of the era, due largely to his shocking demise in a car accident that would make international headlines in a pre-digital world, and the subsequent movies that would be released posthumously in which he portrayed inward-looking, disaffected adolescents on the verge of adulthood.

When the word "teenager" was still in relatively new usage, Dean’s brief life — on- and of-screen — and sudden death from injuries sustained in a car accident would come to represent a symbol of modern masculinity in the mid-to-late 1950s, a precursor to the counter-culture movement of the 1960s and 1970s.

Dean got his start acting in commercials and TV shows

Born James Byron Dean on February 8, 1931, in Marion, Indiana, his father was a farmer-turned-dentist father who moved his family to Santa Monica, California, where his son attended Brentwood Public School. An only child, Dean’s adored mother died of cancer when he was age 9 and he was sent to live on his aunt and uncle’s Quaker farm. He returned to California after graduating high school, studying theater at the University of California, Los Angeles.

After dropping out of college, the aspiring actor first appeared on television in a Pepsi advertisement followed by uncredited parts in minor Hollywood pictures before heading to New York City in 1951, where he studied at the Actors Studio under Lee Strasberg. Television roles followed in Danger, Omnibus and General Electric Theater and he appeared on Broadway in See the Jaguar and The Immoralist before Hollywood took notice of his talent and brooding good looks. 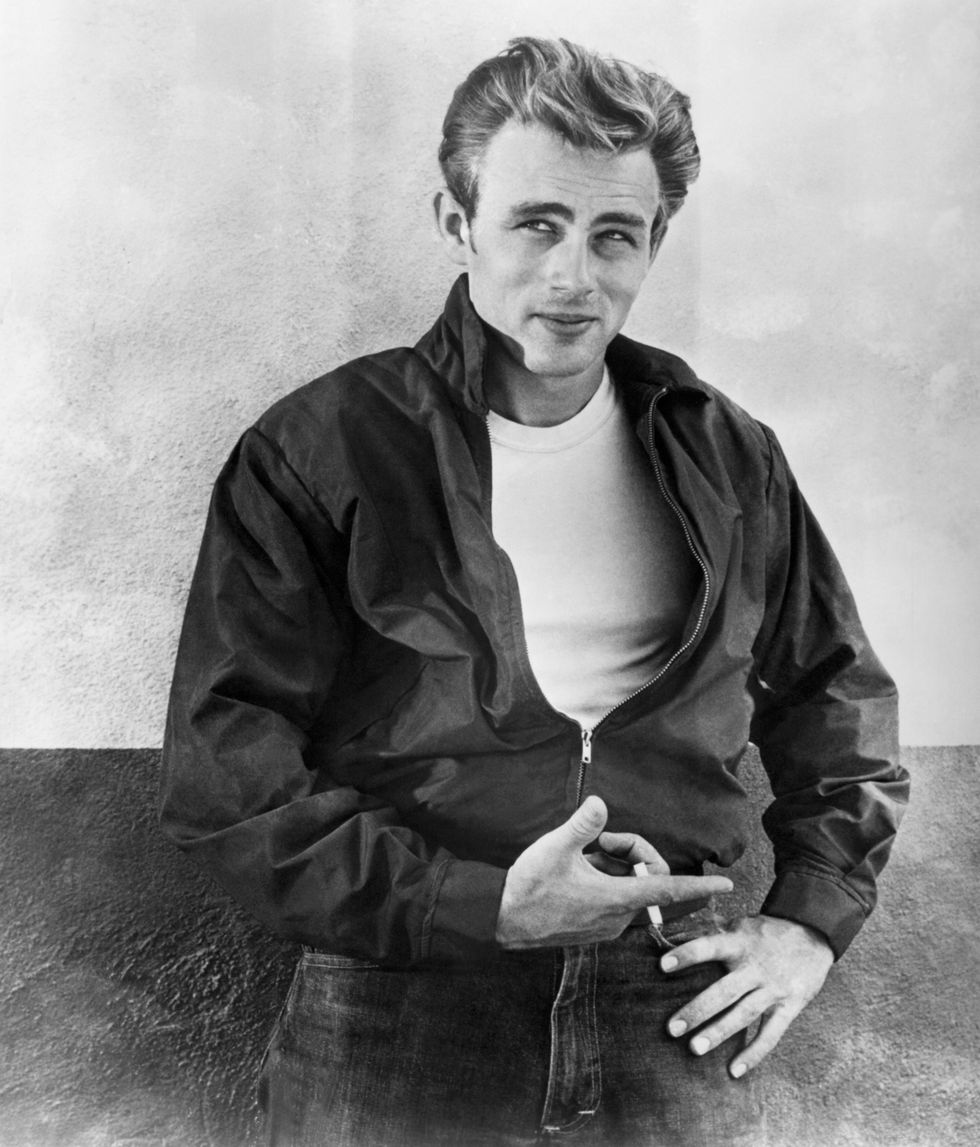 Dean on the set of 'Rebel Without a Cause'; Photo: Sunset Boulevard/Corbis via Getty Images

He filmed his three most-famous films shortly before his death

Dean was soon cast as Cal Trask in the 1954 film adaptation of the John Steinbeck novel East of Eden. It would be the only film released prior to the actor’s death and for which he would be nominated posthumously for Best Actor in a Leading Role at the 1955 Academy Awards. As misunderstood, rebellious Cal, the role foreshadowed Jim Stark, the late-adolescent, angst-ridden character he portrayed in Rebel Without a Cause (1955) alongside Natalie Wood, which would become a teen favorite of the era and forever be identified with the image and legacy of Dean, the tragic movie star.

Fearing he would be typecast as an angry, rebellious teen, Dean’s next role was as a rags-to-riches Texan ranch hand in Giant (1956), co-starring Elizabeth Taylor and Rock Hudson. It would be his final film and would garner him another posthumous Academy Award nomination, making him the only actor ever to be nominated twice following death.

It was soon after wrapping shooting on Giant that Dean returned to his other love – motorsport, in which he first competed professionally prior to filming Rebel Without a Cause. With reported ambition of one day competing in the Indianapolis 500 race, Dean’s financial success from East of Eden had allowed him to purchase a Triumph Tiger motorcycle and Porsche 356 speedster, the latter he traded in on the more powerful convertible Porsche 550 Spyder. 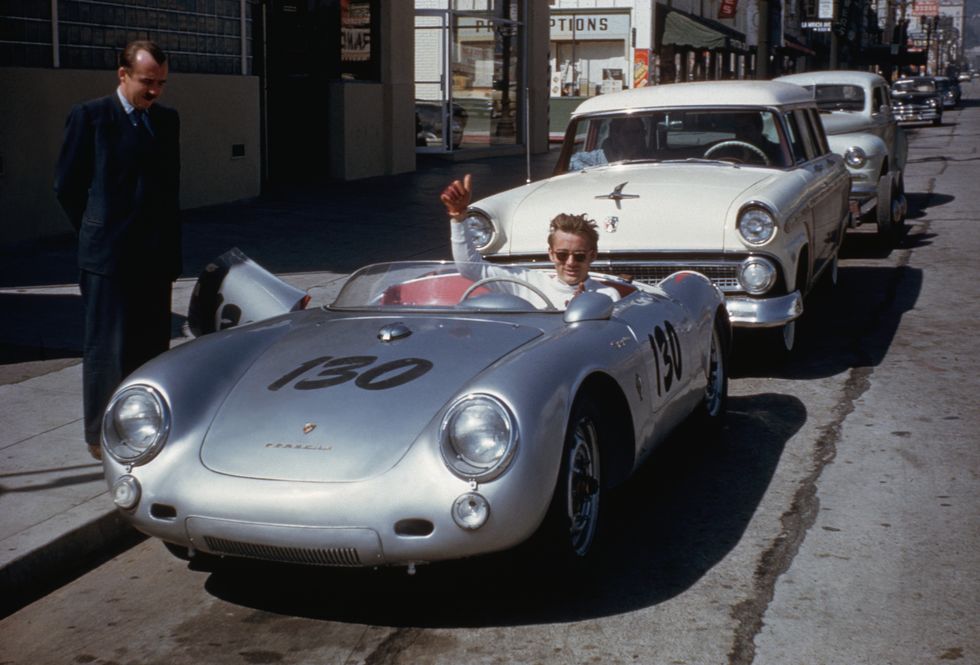 Dean was ticketed for speeding hours before his deadly crash

German Porsche-trained mechanic Rolf Wütherich encouraged Dean to drive the Porsche from Los Angeles to Salinas to get a feel for the new automobile, rather than tow it on a trailer behind the Ford station wagon in which he originally planned to make the journey. Dean was ticketed for speeding at 3:30 p.m., just over two hours before his untimely death.

Dean was killed when the 550 Spyder he was driving collided with a Ford Tudor sedan along then-U.S. Route 446 near Cholame, California. The Ford, driven by 23-year-old Cal Poly student Donald Turnupseed, was turning at an intersection when the two cars hit almost head-on, resulting in massive damage to Dean’s Porsche. The actor died almost instantly while his passenger, Wütherich, was badly injured but survived.

His left foot crushed between the clutch and brake pedal, Dean’s neck was broken and he suffered massive internal injuries. Along with Wütherich, he was transported to the Paso Robles War Memorial hospital 28 miles away where he was pronounced dead on arrival at 6:20 p.m. As well as a broken neck, both his arms were broken, he had fractures of the upper and lower jaw and massive internal injuries. Wütherich suffered a fractured jaw, fractured hip and body lacerations. Turnupseed received only minor injuries and after being interviewed by attending California Highway Patrol officers at the scene, was released.

Dean's legacy has grown in the decades since his death

An inquest into the crash in the days following found Dean at fault due to speeding, though a 2005 article in the Los Angeles Times cited an attending Highway Patrol Officer who recalled the wreckage and position of Dean’s body indicated a speed around 55 mph, not the 90 mph that had been widely reported.

Following the tragic collision, rumors spread over the years and decades that Dean had not really died but was living a secret, hidden life; that he was a closeted homosexual; that the Porsche in which he was driving on that fateful day was cursed. Alongside such rumors, the myth of Dean — the man and the actor — only grew as the years passed. “An actor must interpret life,” Dean once said. On screens and in photographs he remains forever on the cusp of adulthood, a representation of anti-establishment teenage disillusionment and social estrangement, an enduring representation generations have looked to as an interpretation and projection of their own inner lives.