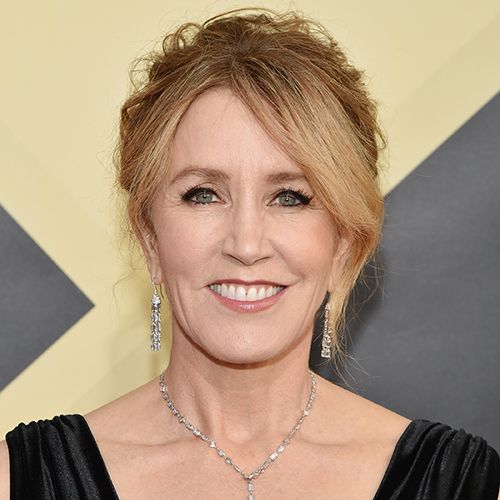 Who Is Felicity Huffman?

Felicity Huffman was born December 9, 1962, in Bedford, New York. In 1988, she made her Broadway debut in Speed-the-Plow. After a string of guest appearances and small film parts, she earned her first prominent role on the acclaimed but short-lived TV show Sports Night. Huffman was among the co-stars of the long-running series Desperate Housewives, and earned an Oscar nomination for her work in Transamerica (2005). In 2019, she was arrested on charges of felony conspiracy to commit mail fraud and honest services mail fraud as part of a widespread college admissions scandal, for which she earned a 14-day prison sentence.

Born on December 9, 1962, in Bedford, New York, Huffman has worked on stage, film and television. She is perhaps best known for her depiction of a frazzled mother Lynette Scavo on the popular prime-time comedy Desperate Housewives. Nicknamed "Flicka" growing up, she first appeared on television in the afterschool special A Home Run for Love (1978) as a teenager.

After graduating from high school in 1981, Felicity Huffman studied at the Royal Academy of Dramatic Art in London. She then went to New York University and delved into the city's theatrical world. Huffman became a founding member of the Atlantic Theater Company. In 1988, she made her Broadway debut in David Mamet's Speed-the-Plow, taking over the role of Karen from Madonna.

After a string of guest appearances and small film parts, Felicity Huffman got a chance to show television audiences just how talented she was in 1998 with the comedy Sports Night, created by Aaron Sorkin. Playing television producer Dana Whitaker, she earned a Golden Globe Award nomination in 2000 for her work on the series. While critics loved the show, it only lasted two seasons.

After a recurring role on the popular comedy Frasier, Felicity Huffman landed a leading role in a new suburban comedy, Desperate Housewives, co-starring with Marcia Cross, Teri Hatcher and Eva Longoria. During the course of the series, her character wrestled with balancing work and family. Early in the show's run, Lynette was a stay-at-home mom to her four children, often overwhelmed by the antics of her rambunctious brood and the absence of her husband Tom (Doug Savant), though the couple switched roles when Lynette returned to work. Throughout her character's ups and downs, Huffman made Lynette a realistic, genuine depiction of a modern wife and mother. For her work on the series, she won the Emmy Award for Outstanding Lead Actress in a Comedy Series in 2005.

That same year, Felicity Huffman found success on the big screen. She starred in Transamerica (2005), an independent film about a pre-operative transsexual named Bree. The story revolves around the discovery of a son named Toby from a sexual encounter during college and the cross-country journey the two take together. The gentle humanity she infused into this challenging role helped Huffman earn her first Academy Award nomination.

The actress has since starred in such films as Georgia Rule (2007), alongside Jane Fonda and Lindsay Lohan, and Cake (2014). She also made a noteworthy return to television in 2015 with American Crime, for which she garnered Emmy and Golden Globe nominations. In 2019, Huffman teamed with Angela Bassett and Patricia Arquette for the Netflix comedy Otherhood, the trio playing empty nesters who intrude on their adult sons.

A resident of Los Angeles, Felicity Huffman has been married to actor and director William H. Macy since 1997. The couple has two daughters, Sofia and Georgia.

On March 12, 2019, Huffman was arrested along with Full House actress Lori Loughlin and another four dozen individuals as part of a widespread college admissions scam that involved parents paying bribes to boost their children's chances of attending elite colleges.

According to court documents, Huffman and Macy contributed $15,000 to a phony charitable organization in exchange for having a preferred proctor oversee their older daughter's college entrance exam and secretly change her incorrect answers. Huffman was charged with felony conspiracy to commit mail fraud and honest services mail (her husband was not charged) and released after posting a $250,000 bond.

On April 8, it was announced that Huffman was among the 13 parents who agreed to plead guilty to the charges. On September 13, Huffman was sentenced to 14 days in prison, a $30,000 fine, 250 hours of community service and a year of probation.

"I accept the court’s decision today without reservation. I have always been prepared to accept whatever punishment Judge Talwani imposed. I broke the law. I have admitted that and I pleaded guilty to this crime. There are no excuses or justifications for my actions. Period," Huffman said in a statement.

"I would like to apologize again to my daughter, my husband, my family and the educational community for my actions. And I especially want to apologize to the students who work hard every day to get into college, and to their parents who make tremendous sacrifices supporting their children.

I have learned a lot over the last six months about my flaws as a person. My goal now is to serve the sentence that the court has given me. I look forward to doing my community service hours and making a positive impact on my community. I also plan to continue making contributions wherever I can well after those service hours are completed.

I can promise you that in the months and years to come that I will try and live a more honest life, serve as a better role model for my daughters and family and continue to contribute my time and energies wherever I am needed.

My hope now is that my family, my friends and my community will forgive me for my actions."

On October 15, Huffman reported to the Federal Correctional Institution in Dublin, California, to begin serving her 14-day sentence. She ultimately earned an early release, leaving the prison on October 25.