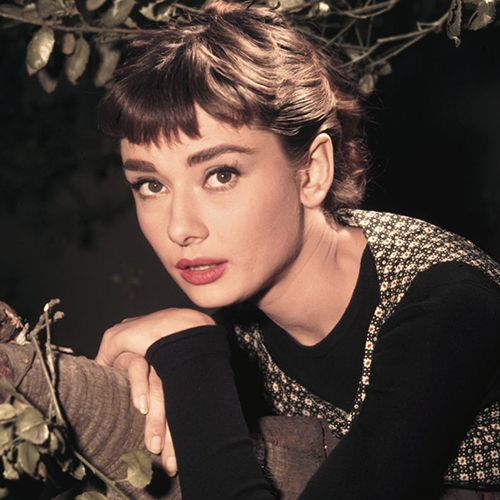 Who Was Audrey Hepburn?

Audrey Hepburn was an actress, fashion icon, and philanthropist who was born in Belgium. At age 22, she starred in the Broadway production of Gigi. Two years later, she starred in the film Roman Holiday (1953) with Gregory Peck. In 1961, she set new fashion standards as Holly Golightly in Breakfast at Tiffany's. Hepburn is one of the few actresses to win an Emmy, Tony, Grammy and Academy Award. In her later years, acting took a back seat to her work on behalf of children.

Born on May 4, 1929, in Brussels, Belgium, Hepburn was a talented performer known for her beauty, elegance and grace. Often imitated, she remains one of Hollywood's greatest style icons. A native of Brussels, Hepburn spent part of her youth in England at a boarding school. During much of World War II, she studied at the Arnhem Conservatory in the Netherlands. After the Nazis invaded the country, Hepburn and her mother struggled to survive. She reportedly helped the resistance movement by delivering messages, according to an article in The New York Times.

After the war, Hepburn continued to pursue an interest in dance. She studied ballet in Amsterdam and later in London. In 1948, Hepburn made her stage debut as a chorus girl in the musical High Button Shoes in London. More small parts on the British stage followed. She was a chorus girl in Sauce Tartare (1949), but was moved to a featured player in Sauce Piquante (1950).

That same year, Hepburn made her feature film debut in 1951's One Wild Oat, in an uncredited role. She went on to parts in such films as Young Wives' Tales (1951) and The Lavender Hill Mob (1951), starring Alec Guinness.

At the age of 22, Hepburn went to New York to star in the Broadway production of Gigi, based on the book by the French writer Colette. Set in Paris around 1900, the comedy focuses on the title character, a young teenage girl on the brink of adulthood. Her relatives try to teach her ways of being a courtesan, to enjoy the benefits of being with a wealthy man without having to marry. They try to get a friend of the family, Gaston, to become her patron, but the young couple has other ideas.

Only a few weeks after the play premiered, news reports indicated that Hepburn was being wooed by Hollywood. Only two years later, she took the world by storm in the film Roman Holiday (1953) with Gregory Peck. Audiences and critics alike were wowed by her portrayal of Princess Ann, the royal who escapes the constrictions of her title for a short time. She won an Academy Award for Best Actress for this performance.

The next year, Hepburn returned to the Broadway stage to star in Ondine with Mel Ferrer. A fantasy, the play told the story of a water nymph who falls in love with a human played by Ferrer. With her lithe and lean frame, Hepburn made a convincing sprite in this sad story about love found and lost. She won the 1954 Tony Award for Best Actress in a Play for her performance. While the leading characters in the play grew apart, the actors found themselves becoming closer. The two also made a dynamic pair off stage and Hepburn and Ferrer got married on September 25, 1954, in Switzerland.

Back on the big screen, Hepburn made another award-worthy performance in Sabrina (1954) as the title character, the daughter of a wealthy family's driver. Sabrina returned home after spending time in Paris as a beautiful and sophisticated woman. The family's two sons, Linus and David, played by Humphrey Bogart and William Holden, never paid her much mind until her transformation. Pursuing her onetime crush David, Sabrina unexpectedly found happiness with his older brother Linus. Hepburn earned an Academy Award nomination for her work on this bittersweet romantic comedy.

Showcasing her dancing abilities, Hepburn starred opposite Fred Astaire in the musical Funny Face (1957). This film featured Hepburn undergoing another transformation. This time, she played a beatnik bookstore clerk who gets discovered by a fashion photographer played by Astaire. Lured by a free trip to Paris, the clerk becomes a beautiful model. Hepburn’s clothes for the film were designed by Hubert de Givenchy, one of her close friends.

Stepping away from lighthearted fare, Hepburn co-starred in the film adaptation of Leo Tolstoy's War and Peace with her husband, Ferrer, and Henry Fonda in 1956. Three years later, she played Sister Luke in The Nun's Story (1959), which earned her an Academy Award nomination. The film focused on her character's struggle to succeed as a nun. A review in Variety said, "Audrey Hepburn has her most demanding film role, and she gives her finest performance." Following that stellar performance, she went on to star in the John Huston-directed western The Unforgiven (1960) with Burt Lancaster. That same year, her first child, a son named Sean, was born.

Returning to her glamorous roots, Hepburn set new fashion standards as Holly Golightly in Breakfast at Tiffany's (1961), which was based on a novella by Truman Capote. She played a seemingly lighthearted, but ultimately troubled New York City party girl who gets involved with a struggling writer played by George Peppard. Hepburn received her fourth Academy Award nomination for her work on the film.

For the rest of the 1960s, Hepburn took on a variety of roles. She starred with Cary Grant in the romantic thriller Charade (1963). Playing the lead in the film version of the popular musical My Fair Lady (1964), she went through one of the most famous metamorphoses of all time. As Eliza Doolittle, she played an English flower girl who becomes a high society lady. Taking on more dramatic fare, she starred a blind woman in the suspenseful tale Wait Until Dark (1967) opposite Alan Arkin. Her character used her wits to overcome the criminals that were harassing her. This film brought her a fifth Academy Award nomination. That same year, Hepburn and her husband separated and later divorced. She married Italian psychiatrist Andrea Dotti in 1969, and the couple had a son, Luca, in 1970.

In the 1970s and 1980s, Hepburn worked sporadically. She starred opposite Sean Connery in Robin and Marian (1976), a look at the central figures of the Robin Hood saga in their later years. In 1979, Hepburn co-starred with Ben Gazzara in the crime thriller Bloodline. Hepburn and Gazzara teamed up again for the 1981 comedy They All Laughed, directed by Peter Bogdanovich. Her last screen role was in Always (1989) directed by Steven Spielberg. 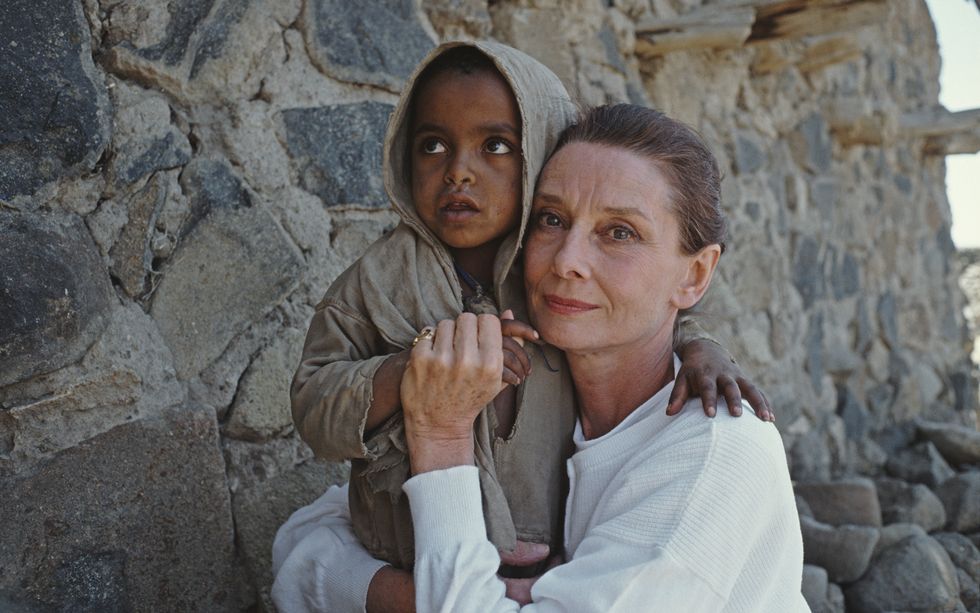 Audrey Hepburn pictured with an Ethiopian girl on her first field mission for UNICEF in Ethiopia, 1988
Photo: Derek Hudson/Getty Images

In her later years, acting took a back seat to her work on behalf of children. She became a goodwill ambassador for UNICEF in the late 1980s. Traveling the world, Hepburn tried to raise awareness about children in need. She understood too well what it was like to go hungry from her days in the Netherlands during the German Occupation. Making more than 50 trips, Hepburn visited UNICEF projects in Asia, Africa and Central and South America. She won a special Academy Award for her humanitarian work in 1993, but she did not live long enough to receive it. Hepburn died on January 20, 1993, at her home in Tolochenaz, Switzerland after a battle with colon cancer.

Her work to help children around the world continues. Her sons, Sean and Luca, along with her companion Robert Wolders, established the Audrey Hepburn Memorial Fund at UNICEF to continue Hepburn's humanitarian work in 1994. It is now known as the Audrey Hepburn Society at the US Fund for UNICEF.