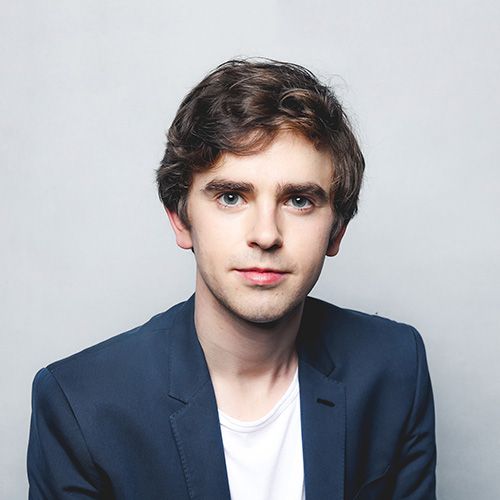 Who Is Freddie Highmore?

Freddie Highmore has been an actor since he was seven years old. While he is best known for starring in two consecutive American TV series – Bates Motel on A&E and The Good Doctor – he first gained fame as a child and young teen in movies such as Finding Neverland (2004), the story of Peter Pan creator J.M. Barrie, and Charlie and the Chocolate Factory (2005), based on the Roald Dahl novel.

Highmore was born in the Camden Town section of London. His father, Edward Highmore, is also an actor whose credits are primarily in British television, including Doctor Who and the English series Howard’s Way.

Though he came from an acting and theatrical family, Highmore doesn’t seem to have taken any special instruction in acting. He says he attended a “regular” school in his North London neighborhood. “I’d work in L.A., then return home to normality,” he told The Telegraph. “Acting was a hobby, not an end game.”

Highmore was still a student at England’s Cambridge University close to completing a degree in both Arabic and Spanish when he started filming the first season of Bates Motel in 2013.

Before making his big-screen breakthrough in Finding Neverland in 2004, Highmore appeared in various film and television shows such as the comedy Women Talking Dirty (1999), a young King Arthur on The Mists of Avalon (2001), and the films Two Brothers (2004) and Five Children and It (2004).

Highmore had his star turn beginning with Finding Neverland (2004), directed by Marc Forster. Highmore played Peter Llewelyn Davies and had the opportunity to work opposite Johnny Depp (who played Barrie) and Kate Winslet (who played his mother Sylvia.) The young actor developed a kinship with Depp and to this day, the two keep in touch.

'Charlie and the Chocolate Factory'

A year later, Highmore worked with Depp again in Charlie and the Chocolate Factory (2005), which was directed by Tim Burton. Depp had reportedly requested that Highmore be cast as the young Charlie Bucket, while he played the eccentric owner of the chocolate factory, Willy Wonka.

Starting in 2013, Highmore starred in Bates Motel playing Norman Bates, the homicidal lead character of the classic Alfred Hitchcock film Psycho from 1960. Highmore’s Bates was a younger version than the character played in the movie by Anthony Perkins. Bates Motel was conceived as a “prequel” to the movie. The show also starred Vera Farmiga as Norman’s mother, who had already been long dead in the famous movie.

After Bates Motel ended its run in 2017 after five seasons, Highmore leapt almost directly into The Good Doctor after reading a script just three days after the final episode of Bates Motel.

In The Good Doctor, which premiered in September 2017, Highmore drew praise for his portrayal of a young doctor on the autism scale who struggled in his relationships with other people – both patients and co-workers – in the show’s fictional hospital.

But the character – Dr. Shaun Murphy – also happens to be a genius who is highly skilled at making diagnoses that others miss and, in the process, saves lives. His genius also encompasses an ability to perform complicated procedures that seem to far exceed his young age and relative lack of experience.

For his roles in Finding Neverland and Charlie and the Chocolate Factory, Highmore won consecutive Critics' Choice Movie Awards for Best Young Performer. When he began working on Bates Motel, Highmore did not go unnoticed, either, ultimately taking home a People's Choice Award.

For his role in The Good Doctor, Highmore was nominated for a Golden Globe for Best Performance by a Television Actor - Drama, although he lost to Sterling K. Brown that year in This Is Us.

Perhaps owing at least in part to his lack of activity on social media, Highmore’s private life has indeed remained that way. At various times, he has been rumored to be dating actresses close to his own age, including Abigail Breslin, Dakota Fanning and Emma Roberts (with whom he co-starred in a 2011 movie, The Art of Getting By). But no information, other than unfounded speculation, can be found to confirm that any of these relationships were serious.