In late spring 1962, Muhammad Ali was a brash 20-year-old boxer who'd already won two national Golden Glove titles and claimed an Olympic gold medal. Still known as Cassius Clay (he would change his name two years later), he was already working his way into contention for the sport's heavyweight championship.

As a Black man raised in the segregated South, Clay at this point in his career was publicly careful to say the "right" things and not rock the boat on issues of America's fundamental racial inequity—even as the civil rights movement was gaining steam. But privately, he was absorbing a far different message from the Nation of Islam, a Black nationalist offshoot of mainstream Islam that preached the separation of races and rejected the nonviolent ideals of the Martin Luther King Jr.-led civil rights movement.

Up to that point, Clay knew Islam mainly through the teaching of regional ministers near his training base of Miami, Florida, and through the words of the NOI's supreme leader, Elijah Muhammad. However, he was about to meet an equally energetic and charismatic figure named Malcolm X. The encounter would change the lives of both men—and shape the turbulent era in which they rose to fame.

As told in Blood Brothers: The Fatal Friendship Between Muhammad Ali and Malcolm X, Clay traveled with recruiter Sam Saxon in early June 1962 to see Elijah Muhammad speak for the first time at an NOI rally in Detroit, Michigan.

Prior to the rally, Saxon brought Clay to meet Malcolm X, the minister of New York City's Mosque No. 7, at a Detroit diner. Although he knew nothing about Clay's growing prominence in the boxing world, the Muslim leader quickly sensed a "contagious quality" about the imposing but affable athlete.

And Clay, reared in segregated Louisville, Kentucky, was floored when he attended the rally and heard Malcolm X deliver the sort of explosive oratory that commanded the attention of those who endured the pains and humiliations of an unequal society.

"My first impression of Malcolm X was how could a Black man talk about the government and white people and act so bold and not be shot at?" the boxer later recalled. "He was fearless. That really attracted me."

Recalling her own impressions of the mutual attraction in Muhammad Ali: His Life and Times, Malcolm X's wife, Betty Shabazz, describes how her husband was thrilled by Clay's increasing involvement in the NOI. But he was mainly concerned with his young friend's personal development at a time when his public platform was growing.

Malcolm's eldest daughter, Attallah, echoes those sentiments: "My father's relationship with him was not as a recruiter for the Nation so much as it was one individual meeting another and suggesting he could have direction and supporters... My father loved Cassius like a brother."

Malcolm X bolstered his influence over his protegé by assigning an associate, Archie Robinson, to help manage the boxer's day-to-day affairs. And Clay, in turn, began showing signs that he was evolving from a braggadocious but harmless entertainer into someone willing to make his own increasingly inflammatory comments.

"I believe in the eye-for-an-eye business. I'm no cheek-turner," he said, shortly after a win over Doug Jones in March 1963. "The NAACP can say, 'turn the other cheek,' but the NAACP is ignorant."

Meanwhile, another vital relationship in the life of Malcolm X – his once unbreakable bond with Muhammad – was beginning to fray. Malcolm X was angered by Muhammad's tepid response to the police killing of an NOI member in Los Angeles in April 1962, and he was torn by reports of the leader's marital infidelities. Muhammad, meanwhile, was increasingly viewing his top underling as a man who couldn't be controlled or trusted.

The friction came to a head after Malcolm X defied instructions to remain silent about the November 1963 John F. Kennedy assassination, calling it a case of "chickens coming home to roost." Muhammad initially ordered him to refrain from public speaking for 90 days, but by early 1964, the leader had stripped the minister of all responsibilities and suspended him indefinitely.

In mid-January 1964, Malcolm X brought his wife and three young daughters to Miami to visit Clay, then in training for his heavyweight title shot against the fearsome champion Sonny Liston.

According to Blood Brothers, the Muslim minister was there to boost the young boxer's confidence as he faced the most important bout of his life, and he repeatedly insisted that Clay would win because he was a true believer in Allah. However, Malcolm X had an additional motive in mind, as he aimed to show Muhammad that he couldn't be cast out of the Nation so easily when he had a recruit of growing fame like Clay in his corner.

His presence also had the effect of aggravating promoter Bill MacDonald, who worried that paying customers would be scared off by the whispers of Clay's involvement with the Black Muslims and threatened to cancel the bout. It took an intervention from another promoter, Harold Conrad, to get Malcolm X to agree to leave town, though he insisted he would be back in time for the fight.

As promised, Malcolm X returned to watch Clay shake up the world with his win over Liston on February 25, 1964. And he was with the new champ for a quiet evening of reflection and rumination in a hotel room with a small circle of insiders that included singer Sam Cooke and pro football star Jim Brown.

READ MORE: The True Story Behind 'One Night in Miami'

Ali announced his NOI affiliation after becoming the champ

Over the next two days, Clay continued to shake things up with a pair of news conferences in which he let loose the feelings that had been bottled up for years. Yes, he was a Muslim, and no, he didn't believe in racial integration. "I know where I'm going and I know the truth, and I don't have to be what you want me to be," he declared at one point. "I'm free to be what I want."

On the surface, this seemed to mark the climax of the connection between Clay and Malcolm X—the student revealing to a global audience everything he had learned since his eyes had been opened to the truth, as his teacher proudly watched from the wings.

Yet, according to Blood Brothers, the friendship between the two famous men was already nearing its end. Clay, well aware of the widening gulf between Muhammad and Malcolm X, had been warned by the former to stay away from the renegade minister. And on the same evening that Clay celebrated his championship victory with his three fellow Black luminaries, he also privately revealed to Brown that his allegiances lay with the NOI's supreme leader. 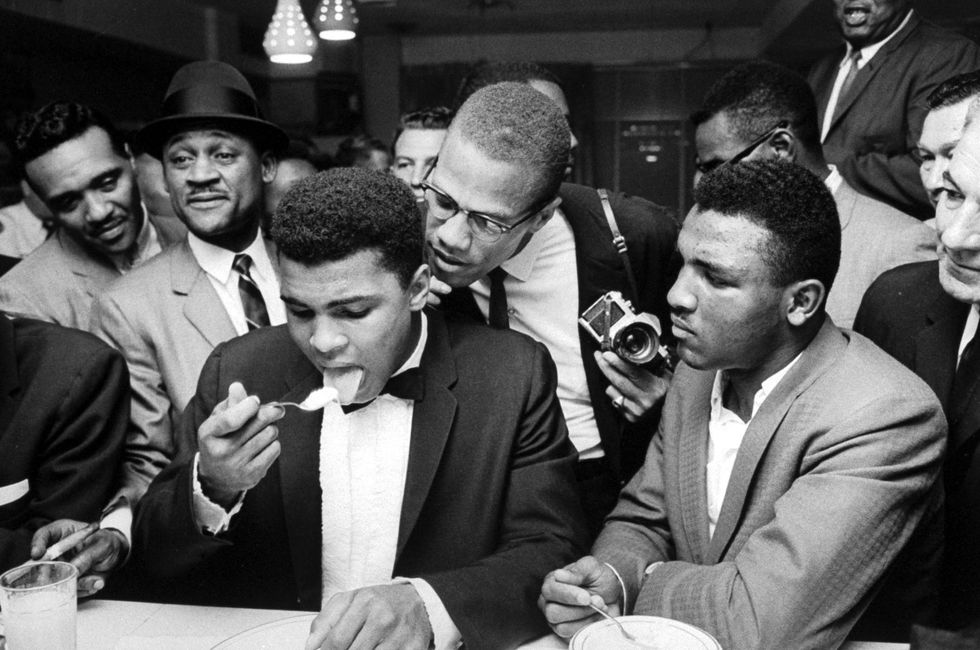 Ali cut off their relationship during an encounter in Africa

The following week, the heavyweight champ took a victory tour of New York City with Malcolm X. They dropped by the offices of the Harlem-based paper, the Amsterdam News, where Clay declared he would now be known as "Cassius X," and visited the United Nations to meet with delegates from Africa.

On March 6, Muhammad reportedly called Clay to remind him of instructions to stay away from the exiled minister. That evening, the NOI leader delivered a radio address to announce that he was bestowing a full Muslim name on the champ. "This Clay name has no divine meaning," Muhammad said. "Muhammad Ali is what I will give to him as long as he believes in Allah and follows me."

Malcolm X attempted to call his friend after listening to the radio address, but was unable to get past the gatekeepers answering the phone. And although Blood Brothers indicates that they had a couple of low-key meetings in the weeks that followed, their friendship was essentially finished.

Their split was revealed after they independently journeyed to Africa that spring and bumped into one another outside a hotel in Ghana. The teacher warmly greeted his student, but received no such love in return. "You left the Honorable Elijah Muhammad – that was the wrong thing to do, Brother Malcolm," Ali coldly said, before turning his back on him for good.

The men went their separate ways even as each remained tied to the controversial organization that had provided spiritual salvation. Ali shouldered the load as the NOI's most famous and visible proponent, and Malcolm X publicly renounced what he had been taught by Muhammad as he privately endured a series of death threats from former associates.

On February 21, 1965, Malcolm X's fears were realized when he was gunned down at the start of his speech at New York City's Audubon Ballroom, with three NOI members eventually convicted of his murder.

Ali reported that he was "shocked and surprised" to hear of Malcolm X's death, though his public actions carried little sign of remorse. On the day of his erstwhile mentor's funeral, Ali clowned around in an NOI-sponsored boxing exhibition in Chicago. A few months later, just before his heavily anticipated rematch with Liston, the champ got testy when asked about being the target of a possible retaliation from Malcolm X's people. "What people?" he hissed. "Malcolm ain't got no people."

Ali eventually revealed his enduring affections for his old friend

But while he attempted to bury any show of affection for his slain friend, Ali's true feelings eventually surfaced—facilitated, in part by a spiritual transformation he underwent when turning to the more inclusive Sunni Islam after the 1975 death of Muhammad.

Muhammad Ali: His Life and Times recalls an encounter between the boxer and Attallah Shabazz around 1978. Although they were at an event where Ali was the main attraction, he kept his old friend's daughter by his side the entire day, and they candidly discussed his feelings about her father in later meetings.

When it came time to write his 2005 memoir Soul of a Butterfly, Ali was more than ready to acknowledge Malcolm X as "a great thinker and an even greater friend."

"Turning my back on Malcolm was one of the mistakes that I regret most in my life," he wrote. "I wish I'd been able to tell Malcolm I was sorry, that he was right about so many things... He was a visionary — ahead of us all."