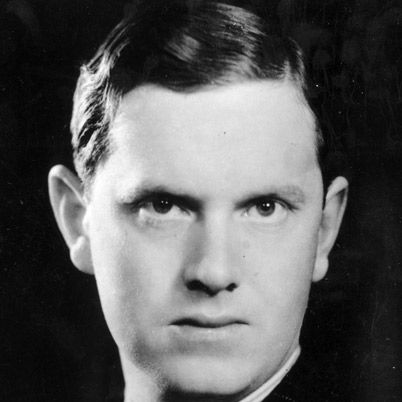 Who Was Evelyn Waugh?

After short periods as an art student and schoolmaster, Evelyn Waugh devoted himself to both traveling and writing novels. His books are unusually highly wrought and precisely written, and those penned before 1939 may be described as satirical. During World War II, Waugh's writing took on a more serious and ambitious turn, culminating in his masterwork Brideshead Revisited. Waugh died in Somerset, England, in 1966.

Arthur Evelyn St. John Waugh was born on October 28, 1903, in London, England, the second son of Catherine and Arthur Waugh. Arthur was a managing director of a publisher that handled the work of writer Charles Dickens (whom Waugh came to loathe). Both Waugh, known as Evelyn, and his older brother, Alec, were destined to become well-known novelists. The younger boy began writing and illustrating short stories as a small child. "I wrote my first piece of fiction at 7: 'The Curse of the Horse Race,'" Evelyn Waugh later told a Paris Review interviewer. "It was vivid and full of action. Then...there was The World to Come, written in the meter of Hiawatha." Waugh followed that up, he said, with a 5,000-word novel about school life that was "intolerably bad."

Waugh was close to his mother but felt somewhat shut out by the bond between his father and older brother. Due to a homosexual scandal involving his brother at the Sherborne School, Waugh was forced to attend Lancing, a strongly religious institution. He resented the displacement but continued to distinguish himself as a writer and an artist, if also a bit of a cynic and schoolyard bully—photographer Cecil Beaton was one of his victims. Nonetheless Waugh still earned a scholarship to Hertford College in Oxford.

Waugh loved his life at Oxford, quickly adapting and adopting the trappings of student life: pipe, bike and a wry attitude. He left before earning his degree, however, and took a series of low-paying teaching jobs while trying to be an artist. After going to see a friend, Anthony Powell, who was working with the English publishing company Duckworth, Waugh was commissioned to write a biographical work of artist Dante Gabriel Rossetti. Waugh was ultimately displeased with the book, but his reputation was on its way to being cemented and was further established by his debut novel Decline and Fall (1928).

A series of military appointments, solitary travels and an unhappy marriage fueled Waugh's subsequent works, and although his own assessment of his writing varied widely, he is considered a master of sardonic wit and a wordsmith of technical brilliance.

In addition to novels, Waugh wrote travel books, short stories and articles. In 1930, for example, wearing his journalist hat, Waugh covered Haile Selassie I's coronation as emperor of Ethiopia—which he described as "an elaborate propaganda effort" to disguise the emperor's true brutality. Waugh's service during World War II in the Royal Marines and Royal Horse Guards and his involvement in a British military mission to the Yugoslav Partisans (1944) provided rich material for his later novels. It was also during this time that he worked on what would become his most famous novel, Brideshead Revisited (1945). The work, considered a cornerstone of the British literary canon, follows a military captain who survived WWI and a cast of supporting characters affiliated with a moneyed estate.

The failure of Waugh's short first marriage (to Evelyn Gardner, from 1928-30) led to his conversion to Roman Catholicism, which informed much of his later work, including a biography of martyr Edmund Campion.

In the early 1930s, Waugh had unrequited romantic interest in socialite Teresa Jungman, a fact revealed via letters discovered decades later. In 1937, Waugh married Laura Herbert, a cousin of his first wife, and they had seven children. But in less than 10 years he was considered old for his age, suffering physical ailments presumably due to excessive alcohol, tobacco and sedative use to control his depression and insomnia. Having become embittered, his writing fell out of vogue, and he was forced to submit to interviews and write material that he found distasteful.

Waugh died of heart failure on April 10, 1966—which happened to be Easter Day—at his home in Combe Florey, Somerset, England. He had attended a Latin Mass that day, the dissolution of which, due to the modernization of the Catholic Church, had been highly upsetting for him. Six years earlier, he had declined the honor of being named a commander of the British Empire because he felt that he deserved the superior designation of knight of the realm. However, a Requiem Mass in Latin was celebrated in his honor in Westminster not long after his death, on April 21, 1966.

Waugh's work came roaring back into vogue with the success of the BBC series Brideshead Revisited, starring Jeremy Irons, in the early 1980s. Other film versions of his works followed, and the elegance and subtlety of his prose was met with a new, different kind of appreciation. Grandson Alexander explored the family legacy in the book Fathers and Sons, which covered five successive generations of the Waugh clan. The New Yorker called the book "witty, in the Waugh manner, but it is also poignant, especially regarding the relationship between Arthur and his two sons. ... Evelyn was 'no more than an encumbrance in a corner.' That is certainly the way Arthur viewed his second son."

Waugh once said, "Don't hold your parents up to contempt. After all, you are their son, and it is just possible that you may take after them."