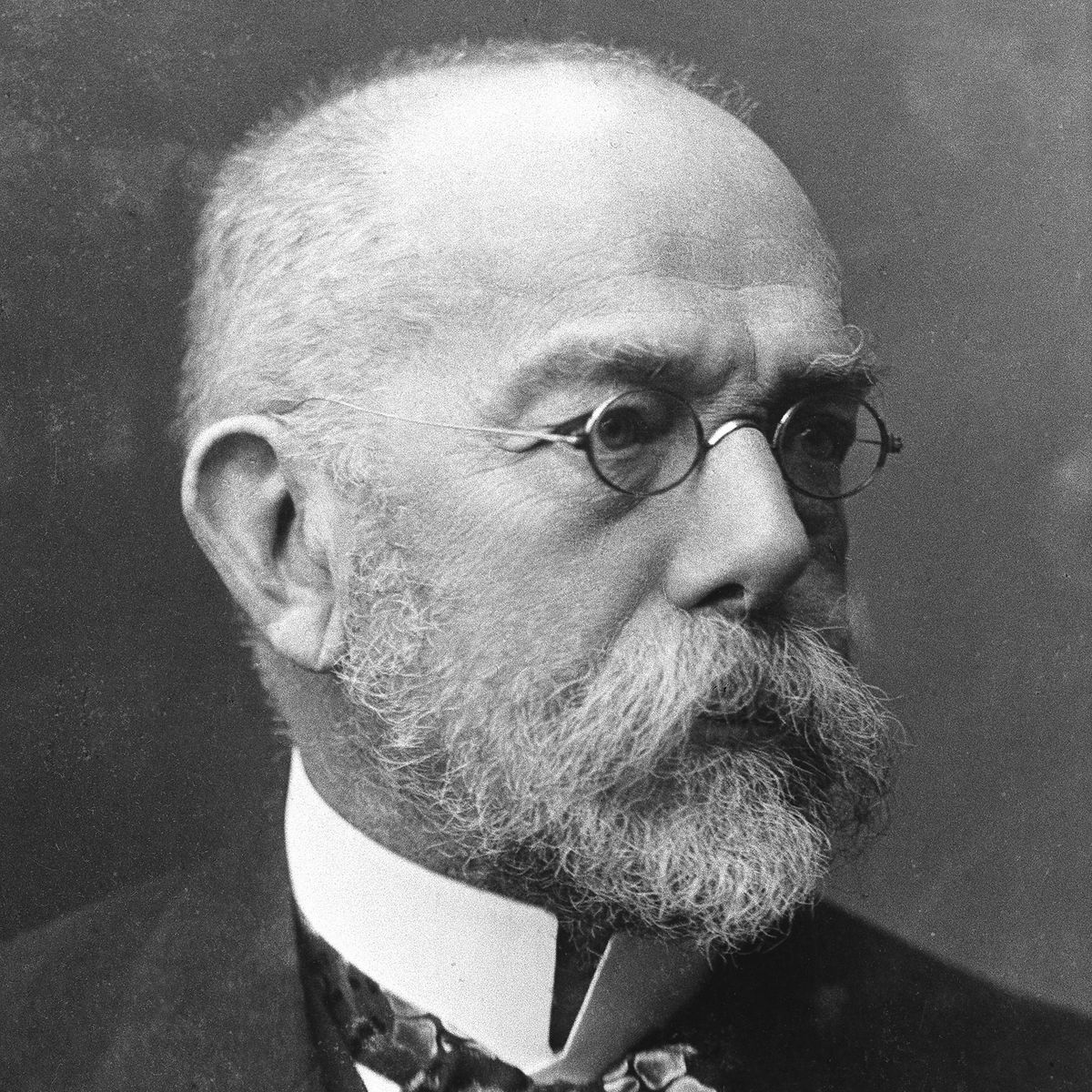 Who Was Robert Koch?

Physician Robert Koch is best known for isolating the tuberculosis bacterium, the cause of numerous deaths in the mid-19th century. He won the Nobel Prize in 1905 for his work. He is considered one of the founders of microbiology and developed criteria, named Koch's postulates, that were meant to help establish a causal relationship between a microbe and a disease.

Robert Koch has been celebrated for his research into the causes of notable diseases and presenting solutions to safeguard public health:

While employed in private practice as a physician in Wollstein, Koch set to work on identifying the root cause of the anthrax that had felled livestock in the region. By inoculating healthy animals with infected tissue, he determined the ideal environment for the anthrax bacillus to spread, including transmission through soil by spores. Koch became the first to link a specific bacterium with a specific disease, propelling him to fame with the publication of his findings in 1876.

After moving to the the Imperial Health Office in Berlin, Koch began his work on discovery of the tubercle bacillus. He painstakingly tried out different stains to reveal the nature of the bacteria, as well as the ideal media in which to grow colonies for study. Inoculating more than 200 animals with bacilli from pure cultures, he determined that sputum was the principal source of the disease's transmission, requiring the sterilization of clothes and bed sheets from infected patients.

Koch's presentation of his findings, at a meeting of the Berlin Physiological Society in 1882, is considered a watershed moment in medical history. In 1905, he was awarded the Nobel Prize in Medicine for his work in helping to curb the spread of the deadly disease.

Following his resounding success with TB, Koch was sent to Egypt and Calcutta, India, to investigate the outbreak of cholera in those areas. He identified the bacillus and its characteristics, though its nature as a human-borne disease made it difficult to test his research on animals. Nevertheless, Koch determined that contaminated drinking water was the primary culprit behind the spread of the disease. He again targeted drinking water as the source of an 1892 outbreak in Germany, leading to a renewed focus on that area of public health.

Along with his discovery of certain bacteria, Robert Koch pioneered new techniques for conducting laboratory research. He experimented with different dyes for observing bacteria and collaborated with microscope developers to foster improved resolution, becoming the first physician to use an oil immersion lens and a condenser.

Realizing that solid media was better than liquid for the development of pure cultures, Koch conducted his groundbreaking research on tuberculosis by growing bacterial colonies on sliced potatoes. He later found improved media for his experiments, with one assistant, Walther Hesse, discovering the favorable properties of agar, and another, Julius Petri, introducing his easy-to-use Petri dish.

By the 1880s, Koch formed a checklist of conditions to be satisfied for specific bacteria to be accepted as the cause of specific diseases:

1. The microorganism or other pathogen must be present in all cases of the disease, and not in healthy animals.

2. The pathogen must be isolated from the diseased host and grown in pure culture.

3. The pathogen from the pure culture must cause the disease when inoculated into a healthy animal.

4. The pathogen must be reisolated from the new host and shown to be the same as the originally inoculated pathogen.

These postulates were formally approved by the Great Powers in Dresden in 1893.

Robert Heinrich Hermann Koch was born on December 11, 1843, in Clausthal, Germany. The son of a mining engineer, he demonstrated a gifted mind at an early age, reportedly announcing to his parents at age 5 that he had taught himself to read by using newspapers.

In 1862, Koch enrolled at the University of Gottingen to study medicine. Among his influential professors was Jacob Henle, a leading anatomist and proponent of the germ theory of disease.

In 1890, Koch announced that he had developed a cure for tuberculosis, called tubercilin. This prompted patients and physicians alike to travel to Berlin, and for Koch to take on a new role as director of the new Institute for Infectious Diseases. However, the so-called cure was soon revealed to have little therapeutic value, damaging Koch's reputation in the medical community.

In 1901, Koch attended the International Tuberculosis Congress in Washington, D.C., where he argued that bovine tuberculosis was of a separate nature from the form that afflicted humans and as such was relatively harmless to men. While correct that the bacilli causing bovine TB was different, he was ultimately proven wrong in his belief that it had little effect on humans and that no public measures were needed to purge infected livestock.

Long harboring a love for travel, Koch spent much of the remaining 15 years of his life visting foreign countries to embark on new research. In the late 1890s he traveled to Rhodesia (South Africa) to help stem an outbreak of rinderpest, and he followed with stops in other parts of Africa and India to study malaria, surra and other diseases.

After stepping down as director of the Institute for Infectious Disease — later renamed the Koch Institute — in 1904, Koch returned to Africa to study trypanosomiasis (sleeping sickness) and visited relatives in the U.S. He died of heart disease on May 27, 1910, in Baden-Baden, Germany.

One of the founders of microbiology, Koch helped usher in a "golden age" of scientific discovery which uncovered the principal bacterial pathogens behind many of the deadliest diseases known to mankind, and directly prompted the implementation of life-saving public health measures. Additionally, his postulates and laboratory techniques served as a bedrock for medicinal developments that lasted well into the 20th century.

Koch's most influential scientific papers were finally published in English in 1987, and the following year, Thomas Brock delivered an acclaimed biography, Robert Koch: A Life in Medicine and Bacteriology.

On December 10, 2017, Google celebrated the 112th anniversary of Koch's Nobel Prize win with one of its celebrated "Google Doodles."