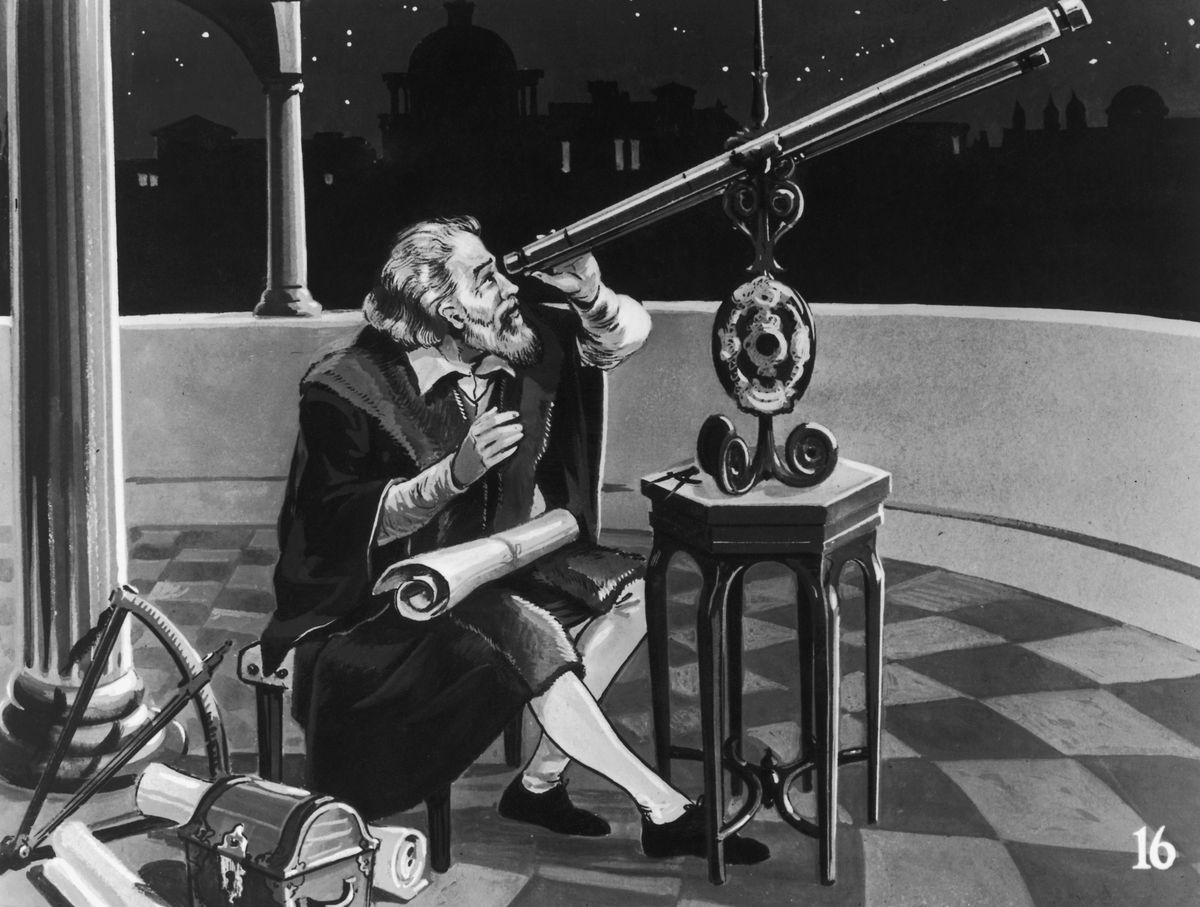 Galileo’s contributions to the fields of astronomy, physics, mathematics, and philosophy have led many to call him the father of modern science. But his controversial theories, which impacted how we see and understand the solar system and our place within it, led to serious conflict with the Catholic Church and the long-time suppression of his achievements.

Galileo developed one of the first telescopes

Galileo didn’t invent the telescope — it was invented by Dutch eyeglass makers — but he made significant improvements to it. After learning about the Dutch invention, he was able to develop one of his own, teaching himself how to ground lenses. His first version magnified distant objects by three times. By that fall, he could produce lenses with a 20x magnification.

His innovations brought him both professional and financial success. He was given a lifetime tenure position at the University of Padua, where he had been teaching for several years, at double his salary. And he received a contract to produce his telescopes for a group of Venetian merchants, eager to use them as a navigational tool.

Galileo turned his new, high-powered telescope to the sky. In early 1610, he made the first in a remarkable series of discoveries. He spent several weeks observing a set of stars near Jupiter as they revolved around the planet. He had discovered Jupiter’s four moons, which he named the Medicean Stars (after his patrons, the powerful Medici family), but which have since been renamed the Galilean moons, in his honor. Galileo’s close study of orbits of Jupiter’s moons and their eclipses helped create more accurate time table and measurements that later mapmakers built upon for the practice of cartography.

While the scientific doctrine of the day held that space was perfect, unchanging environments created by God, Galileo’s telescope helped change that view. His studies and drawings showed the Moon had a rough, uneven surface that was pockmarked in some places, and was actually an imperfect sphere. Galileo also observed the phases of planet Venus and the existence of far more stars in the Milky Way that weren't visible to the naked eye.

He was also one of the first people to observe the phenomena known as sunspots, thanks to his telescope which allowed him to view the sun for extended periods of time without damaging the eye. This discovery also saw one of his first scientific clashes, as he used his evidence to debate fellow scientists who argued that the sunspots were actually satellites of the sun and not irregularities. 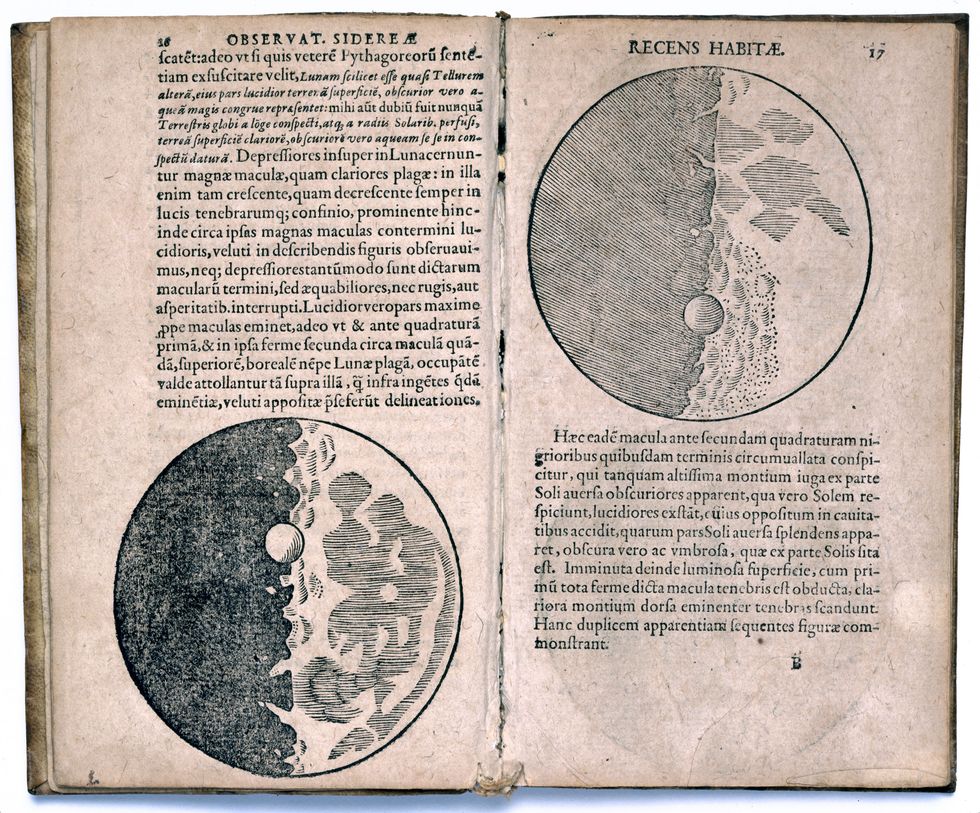 Galileo helped prove that the Earth revolved around the sun

In 1610, Galileo published his new findings in the book Sidereus Nuncius, or Starry Messenger, which was an instant success. The Medicis helped secure him an appointment as a mathematician and philosopher in his native Tuscany.

He became close with a number of other leading scientists, including Johannes Kepler. A German astronomer and mathematician, Kepler’s work helped lay the foundations for the later discoveries of Isaac Newton and others.

Kepler’s experiments had led him to support the idea that the planets, Earth included, revolved around the sun. This heliocentric theory, as well as the idea of Earth’s daily rotational turning, had been developed by Polish astronomer Nicolaus Copernicus half a century earlier. Galileo and Kepler exchanged correspondence around Kepler’s ideas of planetary motion, and their detailed studies and observations helped spur the Scientific Revolution.

Their belief that the Sun, and not the Earth, was the gravitational center of the universe, upended almost 2,000 years of scientific thinking, dating back to theories about the fixed, unchanging universe put forth by the Greek philosopher and scientist Aristotle. Galileo had been testing Aristotle’s theories for years, including an experiment in the late 16th century in which he dropped two items of different masses from the Leaning Tower of Pisa, disproving Aristotle’s belief that objects would fall at differing speeds based on their weight (Newton later improved upon this work).

Galileo paid a high price for his contributions

But challenging the Aristotelian or Ptolemaic theories about the Earth’s role in the universe was dangerous stuff. Geocentrism was, in part, a theoretical underpinning of the Roman Catholic Church. Galileo’s work brought him to the attention of Church authorities, and in 1615, he was called before the Roman Inquisition, accused of heresy for beliefs which contradicted Catholic scripture. The following year, the Church banned all works that supported Copernicus’ theories and forbade Galileo from publicly discussing his works.

Galileo kept quiet for more than 15 years, during which he quietly continued his experiments. In 1632, after the election of a new pope who he considered more liberal, he published another book, Dialogue on the Two Chief World Systems, Ptolemaic and Copernican, which argued both sides of the scientific (and religious) debate but fell squarely on the side of Copernicus’ heliocentrism. Galileo was once again summoned to Rome. In 1633, following a trial, he was found guilty of suspected heresy, forced to recant his views and sentenced to house arrest until his death in 1642.

It took nearly 200 years after Galileo’s death for the Catholic Church to drop its opposition to heliocentrism. In 1992, after a decade-long process and 359 years after his heresy conviction, Pope John Paul II formally expressed the Church’s regret over Galileo’s treatment. In 1995, an unmanned NASA spacecraft named Galileo landed on Jupiter to begin a multi-year study of the planet and its moons, which Galileo had helped identify in 1610.