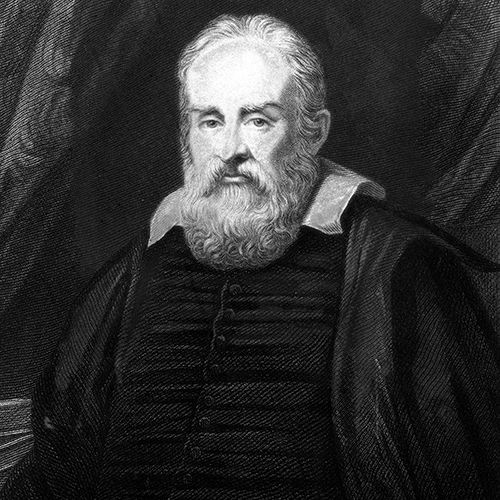 Galileo was an Italian astronomer, mathematician, physicist, philosopher and professor who made pioneering observations of nature with long-lasting implications for the study of physics.

He also constructed a telescope and supported the Copernican theory, which supports a sun-centered solar system. Galileo was accused twice of heresy by the church for his beliefs, and wrote a number of books on his ideas.

Galileo Galilei was born in Pisa in the Duchy of Florence, Italy, on February 15, 1564.

Galileo was the first of six children born to Vincenzo Galilei, a well-known musician and music theorist, and Giulia Ammannati. In 1574, the family moved to Florence, where Galileo started his formal education at the Camaldolese monastery in Vallombrosa.

In 1583, Galileo entered the University of Pisa to study medicine. Armed with prodigious intelligence and drive, he soon became fascinated with many subjects, particularly mathematics and physics.

While at Pisa, Galileo was exposed to the Aristotelian view of the world, then the leading scientific authority and the only one sanctioned by the Roman Catholic Church.

At first, Galileo supported this view, like any other intellectual of his time, and was on track to be a university professor. However, due to financial difficulties, Galileo left the university in 1585 before earning his degree.

Career as a Professor

Galileo continued to study mathematics after leaving the university, supporting himself with minor teaching positions.

During this time he began his two-decade study on objects in motion and published The Little Balance, describing the hydrostatic principles of weighing small quantities, which brought him some fame. This gained him a teaching post at the University of Pisa, in 1589.

While there, Galileo conducted his fabled experiments with falling objects and produced his manuscript Du Motu (On Motion), a departure from Aristotelian views about motion and falling objects. Galileo developed an arrogance about his work, and his strident criticisms of Aristotle left him isolated among his colleagues. In 1592, his contract with the University of Pisa was not renewed.

Galileo quickly found a new position at the University of Padua, teaching geometry, mechanics and astronomy. The appointment was fortunate, for his father had died in 1591, leaving Galileo entrusted with the care of his younger brother.

During his 18-year tenure at Padua, he gave entertaining lectures and attracted large crowds of followers, further increasing his fame and his sense of mission.

In 1600, Galileo met Marina Gamba, a Venetian woman, who bore him three children out of wedlock: daughters Virginia and Livia, and son Vincenzo. He never married Marina, possibly due to financial worries and possibly fearing his illegitimate children would threaten his social standing.

Galileo worried his daughters would never marry well, and when they were older, had them enter a convent. In 1616, at the San Mateo Convent, Virginia changed her name to Maria Celeste and Livia became Sister Arcangela, when they became nuns. Maria Celeste remained in contact and supported her father through letters until her death.

No letters from Arcangela survive. His son’s birth was eventually legitimized and he became a successful musician.

In July 1609, Galileo learned about a simple telescope built by Dutch eyeglass makers and soon developed one of his own. In August, he demonstrated it to some Venetian merchants, who saw its value for navigation and spotting ships. The merchants gave Galileo a salary to manufacture several of them.

Galileo’s ambition pushed him to go further, and in the fall of 1609 he made the fateful decision to turn his telescope toward the heavens. Using his telescope to explore the universe, Galileo observed the moon and found Venus had phases like the moon, proving it rotated around the sun, which refuted the Aristotelian doctrine that the Earth was the center of the universe.

He also discovered Jupiter had revolving moons that didn’t revolve around planet Earth. In 1613, he published his observations of sunspots, which also refuted Aristotelian doctrine that the sun was perfect.

Galileo published a number of books throughout his career, including:

The Operations of the Geometrical and Military Compass (1604), which revealed Galileo’s skills with experiments and practical technological applications.

The Starry Messenger (1610), a small booklet revealing Galileo’s discoveries that the moon was not flat and smooth but a sphere with mountains and craters.

Discourse on Bodies in Water (1612), which refuted the Aristotelian explanation of why objects float in water, saying that it wasn’t because of their flat shape, but instead the weight of the object in relation to the water it displaced.

Dialogue Concerning the Two Chief World Systems (1632), a discussion among three people: one who supports Copernicus' heliocentric theory of the universe, one who argues against it, and one who is impartial. Though Galileo claimed Dialogues was neutral, it was clearly not. The advocate of Aristotelian belief comes across as the simpleton, getting caught in his own arguments.

Two New Sciences (1638), a summary of Galileo’s life’s work on the science of motion and strength of materials.

What Did Galileo Discover?

In addition to the telescope and his numerous mathematical and scientific discoveries, in 1604 Galileo constructed a hydrostatic balance for measuring small objects.

That same year, he also refined his theories on motion and falling objects, and developed the universal law of acceleration, which all objects in the universe obeyed. He also devised a type of simple thermometer.

A simple glass-bulb thermometer known as a Galileo thermometer wasn't invented by Galileo, but was based on his understanding that the density of liquids changes based on its temperature.

A thermoscope that Galileo designed (or helped to design) is similar to modern-day thermometers. Inside the thermoscope, a liquid rises and falls in a glass tube as the temperature of the liquid rises or falls.

Galileo and the Church

After Galileo built his telescope in 1609, he began mounting a body of evidence and openly supporting the Copernican theory that the earth and planets revolve around the sun. The Copernican theory, however, challenged the doctrine of Aristotle and the established order set by the Catholic Church.

In 1613, Galileo wrote a letter to a student to explain how Copernican theory did not contradict Biblical passages, stating that scripture was written from an earthly perspective and implied that science provided a different, more accurate perspective.

The letter was made public and Church Inquisition consultants pronounced Copernican theory heretical. In 1616, Galileo was ordered not to “hold, teach, or defend in any manner” the Copernican theory. Galileo obeyed the order for seven years, partly to make life easier and partly because he was a devoted Catholic.

In 1623, a friend of Galileo, Cardinal Maffeo Barberini, was elected as Pope Urban VIII. He allowed Galileo to pursue his work on astronomy and even encouraged him to publish it, on condition it be objective and not advocate Copernican theory. This led Galileo to publish Dialogue Concerning the Two Chief World Systems in 1632, which advocated the theory.

Church reaction was swift, and Galileo was summoned to Rome. Galileo’s Inquisition proceedings lasted from September 1632 to July 1633. During most of this time, Galileo was treated with respect and never imprisoned.

However, in a final attempt to break him, Galileo was threatened with torture, and he finally admitted he had supported Copernican theory, but privately held that his statements were correct. He was convicted of heresy and spent his remaining years under house arrest.

Though ordered not to have any visitors nor have any of his works printed outside of Italy, he ignored both. In 1634, a French translation of his study of forces and their effects on matter was published, and a year later, copies of the Dialogue were published in Holland.

While under house arrest, Galileo wrote Two New Sciences, published in Holland in 1638. By this time, Galileo had become blind and was in poor health.

In time, however, the Church couldn’t deny the truth in science. In 1758, it lifted the ban on most works supporting Copernican theory. It wasn't until 1835 that the Vatican dropped its opposition to heliocentrism altogether.

In the 20th century, several popes acknowledged the great work of Galileo, and in 1992, Pope John Paul II expressed regret about how the Galileo affair was handled.

Galileo died after suffering from a fever and heart palpitations on January 8, 1642, in Arcetri, near Florence, Italy.

Galileo's contribution to our understanding of the universe was significant not only for his discoveries, but for the methods he developed and the use of mathematics to prove them. He played a major role in the Scientific Revolution and earned the title "The Father of Modern Science."