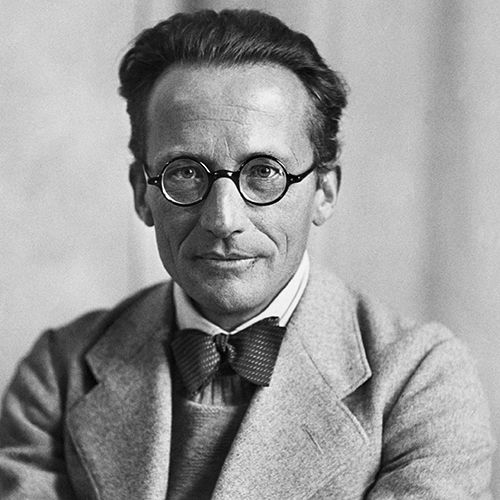 Who Was Erwin Schrödinger?

Austrian physicist Erwin Schrödinger was a noted theoretical physicist and scholar who came up with a groundbreaking wave equation for electron movements. He was awarded the 1933 Nobel Prize in Physics, along with British physicist P.A.M. Dirac, and later became a director at Ireland's Institute for Advanced Studies.

Schrödinger was born on August 12, 1887, in Vienna, Austria, the only child of botanist and oil cloth factory owner Rudolf Schrödinger and Georgine Emilia Brenda, daughter of Alexander Bauer, Rudolf's professor of chemistry at the Technical College of Vienna (Technische Hochschule Vienna). Schrödinger was taught at home by private teachers until he was 11 years old, and then attended Vienna's Akademisches Gymnasium. He went on to enter the University of Vienna, where he focused primarily on the study of physics and was strongly influenced by another young physicist, Fritz Hasenöhrl, and graduated with a Ph.D. in physics in 1910. Afterward, he worked for a few years at the institution as an assistant but was drafted into World War I in 1914, serving with Austro-Hungarian military forces in Italy as an artillery officer.

Schrödinger's tenure as a professor at the University of Zurich over the next six years would prove to be one of the most important periods of his physics career. Immersing himself in an array of theoretical physics research, Schrödinger came upon the work of fellow physicist Louis de Broglie in 1925. In his 1924 thesis, de Broglie had proposed a theory of wave mechanics. This sparked Schrödinger's interest in explaining that an electron in an atom would move as a wave. The following year, he wrote a revolutionary paper that highlighted what would be known as the Schrödinger wave equation.

Following the atomic model of Niels Bohr and a thesis from de Broglie, Schrödinger articulated the movements of electrons in terms of wave mechanics as opposed to particle leaps. He provided a mode of thought to scientists that would become accepted and incorporated into thousands of papers, becoming an important cornerstone of quantum theory. Schrödinger made this discovery in his late 30s, with most theoretical physicists sharing groundbreaking finds in their 20s.

In 1927, Schrödinger left his position at Zurich for a new, prestigious opportunity at the University of Berlin, where he met Albert Einstein. He held this position until 1933, opting to leave upon the rise of Adolf Hitler's Nazi Party and the related persecution of Jewish citizens. Shortly after joining the faculty of Oxford University in England, Schrödinger learned that he had won the 1933 Nobel Prize in Physics, sharing the award with another quantum theorist, Paul A.M. Dirac. In his Nobel Prize acceptance speech, Schrödinger stated that his mentor, Hasenöhrl, would be accepting the award if he hadn't died during World War I.

Following a three-year stay at Oxford, Schrödinger traveled and worked in different countries, including in Austria at the University of Graz. In 1939, he was invited by Irish Prime Minister Eamon de Valera to work at the Institute for Advanced Studies in Dublin, Ireland, heading its School for Theoretical Physics. He remained in Dublin until the mid-1950s, returning in 1956 to Vienna, where he continued his career at his alma mater.

In terms of his writing, Schrödinger published the influential book What Is Life?, his attempt to link quantum physics and genetics, in 1944. He was also versed in philosophy and metaphysics, as evidenced in Nature and the Greeks (1954), which looked at ancient belief systems and inquiries; and his final book, My View of the World (1961), inspired by the Vedanta and exploring belief in a unified consciousness.

Schrödinger died on January 4, 1961, in his hometown of Vienna. A 1989 book on his life was written by professor Walter J. Moore—Schrödinger: Life and Thought.