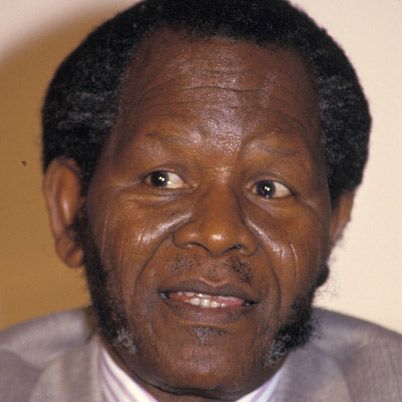 Who Was Oliver Tambo?

Oliver Tambo opened the first Black law firm in South Africa with Nelson Mandela. Tambo would go on to serve in exile as acting president of the African National Congress, a party that agitated to end his country's apartheid regime. He returned to South Africa in 1990, turning over party leadership to Mandela.

Oliver Reginald Tambo was born on October 27, 1917, in the village of Bizana, South Africa to the Pondo people. Of modest farming origins, he earned a scholarship to attend the University of Fort Hare, the only university open to Black citizens in the country, where he studied education and science. He received his bachelor's degree in 1941.

In 1944, Tambo and Mandela, who came from the same region as Tambo and also attended Fort Hare, helped form the Youth League of the African National Congress. Tambo taught at a missionary school for a time but opted to study law, seeing legal action as a powerful tool in which to dismantle state-supported segregation. In 1952, he joined with Mandela to open the Johannesburg-based Mandela and Tambo, the first Black South African law firm. An Anglican, he also had considered a career in the priesthood.

Tambo became increasingly at the forefront of ANC political activity, further agitating against apartheid, the caste system enforced upon the native Black population by the white-controlled government. He and other party members were arrested in 1956 for treason, though later cleared. During this period, Tambo married Adelaide Tshukudu, a nurse and member of the ANC's Youth League; the couple would go on to have three children.

After the Sharpville demonstration massacre, where dozens of citizens were killed or hurt, the ANC took on the stance of using violent, militant tactics to overthrow apartheid. The party was banned by the government and Mandela would be sentenced to life imprisonment. Tambo was appointed to head the ANC in exile by the party's president, Chief Albert Luthuli. Tambo became acting party president in 1967, upon Luthuli's death.

Tambo established residences in Zambia and London, England, among other locales, and received party aid from some European countries, including Holland, East Germany and the Soviet Union. From abroad Tambo coordinated resistance and guerrilla movements, and, despite internal organizational struggles, was able to keep the multiracial ANC intact. During the 1980s, with the unrest in South Africa reaching chaotic heights under the P.W. Botha regime, Tambo was increasingly able to find Western support for the plight of the people, including economic boycotts.

Return to South Africa and Death

Though steadfast in his resolve, Tambo was noted for his grace, warmth and affection. He was able to return to his native country in 1990, when the ban against the ANC was lifted by new South African President F.W. de Klerk. In struggling health after having suffered a stroke, Tambo turned over party presidency to Mandela in 1991 and became chairman. Tambo died on April 24, 1993, in Johannesburg, South Africa.