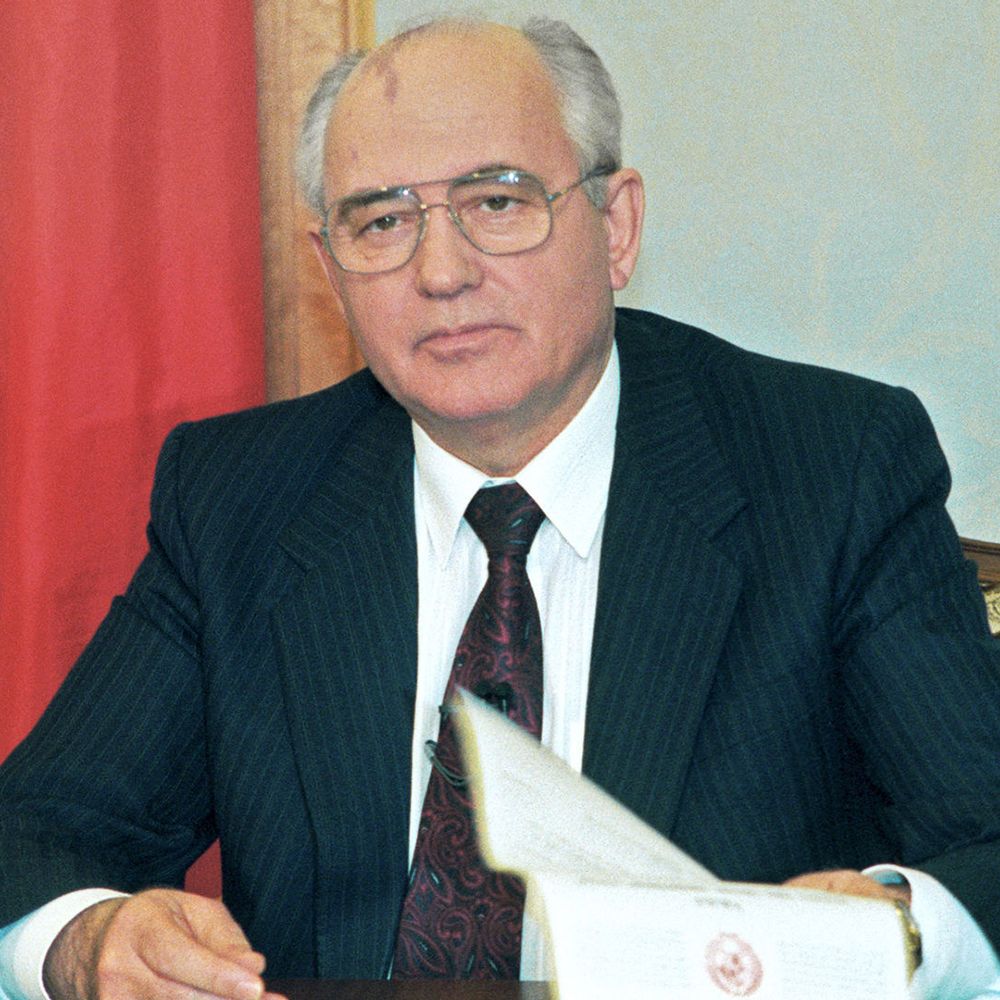 Who Was Mikhail Gorbachev?

Mikhail Gorbachev became a delegate to the Communist Party Congress in 1961. He was elected general secretary in 1985. He became the first president of the Soviet Union in 1990 and won the Nobel Prize for Peace that same year. He resigned in 1991 and founded the Gorbachev Foundation. He remained active in social and political causes throughout the remainder of his life.

Mikhail Sergeyevich Gorbachev was born on March 2, 1931, to a Russian-Ukrainian family in the village of Privolnoye, in the Krasnogvardeisky District near the Stavropol Territory of southern Russia.

Gorbachev’s parents were peasants. His father, Sergei, operated a combine harvester for a living. Sergei was drafted into the Russian Army when the Nazis invaded the USSR in 1941. Three years later, he was wounded in action and returned home to resume operating farm machinery. Sergei passed on his experience to his young son, Mikhail. Mikhail Gorbachev was a quick learner and showed an aptitude for mechanics. As a teenager, Gorbachev contributed to the family’s income by driving tractors at a local machine station. So hard a worker was he that, by the age of 17, Gorbachev was the youngest ever to win the Order of the Red Banner of Labor for his active role in bringing in that year’s bumper crop. Gorbachev’s mother, Maria, exemplified this tireless work ethic with her lifelong toil on a collective farm.

The political climate during Mikhail Gorbachev’s upbringing was turbulent. In the 1930s, when Gorbachev was still very young, he suffered the trauma of seeing his maternal grandfather, Pantelei Gopkalo, arrested during the Great Purge. Gopkalo was accused of being a Trotskyite counterrevolutionary and was imprisoned and tortured for 14 months. To his family’s great relief, he was spared execution.The economic climate during Mikhail Gorbachev’s childhood was also one of turmoil. In 1933, southern Russia endured a major drought. Since the region depended on farming for both food and income, its residents suffered from famine, and many died of starvation.

Gorbachev had become a candidate member of the Communist party while he was in high school, but it wasn’t until 1952, when he was at Moscow University, that he was granted full membership. Once back in Stavropol after graduation, Gorbachev took a position at the Stavropol territorial prosecutor’s office. Soon after he began the job, Gorbachev ran into some old acquaintances. They remembered him from his involvement in the Young Communist League during high school. Because Gorbachev had shown himself to be dedicated and organized, they asked him to be the assistant director of propaganda for the territorial committee of the local Communist youth league.

Soviet premier Joseph Stalin had died two years prior, and the Soviet Union’s process of political restructuring created an exciting climate for young Communist Party activists. Eager to get involved, Gorbachev accepted the offer and resigned his position at the prosecutor’s office after just 10 days on the job.

Gorbachev steadily rose through the ranks of the Communist league. In 1956, he was made first secretary of the Stavropol City Komsomol Committee. In 1961, he was appointed as a delegate to the party congress. Throughout the 1960s, Gorbachev continued to advance his political position and increase his knowledge of agriculture and economics, eventually becoming the regional agricultural administrator and party leader. In 1980, Gorbachev made a critical advancement in his burgeoning political career when he became a full member of the Politburo, otherwise known as the Political Bureau of the Central Agency, the executive committee for numerous Communist Party factions.Cold War

In 1984, Gorbachev’s mentor at the Kremlin, Yuri Andropov, general secretary of the Communist Party, died. An important year in Gorbachev's timeline, 1984 was also when he first met Margaret Thatcher, prime minister of Great Britain, with whom he would develop a strong relationship.

In 1985, when Andropov’s successor, Konstantin Chernenko, also died, Gorbachev was elected general secretary of the Communist Party. Gorbachev inherited the issues that Andropov and Chernenko had been struggling to tackle, including serious domestic problems and escalating Cold War tensions. But Gorbachev’s youthful energy and enthusiasm gave the Soviet Union hope that a new generation of leaders geared toward positive change had taken charge.

During his term as general secretary, Gorbachev engaged with U.S. president Ronald Reagan in a costly race to amass nuclear weapons in space. The expense put further stress on the already suffering Soviet economy. Gorbachev worked diligently to create reforms that he believed would improve the Soviet standard of living. By providing more freedom and democracy to Soviets, he strove toward “glasnost” and “perestroika,” openness and restructuring. He worked toward establishing a market economy that was more socially oriented. Gorbachev’s reforms were also geared toward increasing productivity and reducing waste.

Even a couple of years prior to his appointment, Gorbachev had attempted to improve Soviet relations with the leaders of Western nations. Ronald Reagan was initially distrustful, but when he met with Gorbachev at the first Geneva arms summit in November 1985, Reagan was surprised to find that “there was warmth in [Gorbachev’s] face and style.” Reagan recognized “a moral dimension in Gorbachev.” Thatcher said of the Soviet leader, "I like Mr. Gorbachev. We can do business together."

Over the next three years, Reagan and Gorbachev met at four additional summits, during which their relationship further warmed as they collaborated on bringing the Cold War to a close. Besides Reagan and Thatcher, during this period Gorbachev also cultivated strong ties with West German chancellor Helmut Kohl.

Unfortunately, U.S.-Soviet relations took a major hit when the Chernobyl nuclear power plant exploded in the Ukraine on April 26, 1986. The Soviet Union failed to release a full report until more than two weeks after the event. In light of Gorbachev’s policy of “openness,” some considered his reaction hypocritical.

During the 1985 summit in Geneva and the October 1986 Reykjavik summit, the strain between Gorbachev and Reagan was apparent. The two disagreed over the development of a Strategic Defense Initiative, which Reagan wanted and Gorbachev didn't. Both summits ended in stalemates. At the end of 1987, Gorbachev gave in to Reagan’s argument. At this point, the Soviet Union’s economy was in crisis. Gorbachev’s economic reforms weren’t working. In 1987, Gorbachev and Reagan signed the Intermediate-Range Nuclear Forces (INF) Treaty, the first-ever mutual agreement on nuclear weapons reduction. The Soviet Union welcomed some desperately needed relief from the expenses of the space race.

Included among Gorbachev’s key political reforms was a new, more democratic election system. In 1989, he organized elections that required Communist Party members to run against non-party members. He revoked the Communist Party’s special status as set forth in the USSR’s constitution. State power was handed over to the Congress of People’s Deputies of the USSR, the Soviet Union’s first parliament, based on democratic elections. On March 15, 1990, the Congress of People’s Deputies elected Gorbachev the first president of the Soviet Union.

During his presidency, Gorbachev promoted more peaceful international relations. He ordered Soviet troops to withdraw from Afghanistan. Through his peaceful negotiations with President Reagan, Gorbachev was also instrumental in ending the Cold War. He was likewise credited for his crucial role in the fall of the Berlin Wall and subsequent reunification of Germany. For his excellent leadership and his contributions to the overall betterment of world development, Gorbachev was awarded the Nobel Peace Prize on October 15, 1990.

In addition to fielding conflicts with other nations, Gorbachev tackled pressing issues within the Soviet Union. Different ethnic groups within the USSR had begun to wage war against one another, while other groups, such as Ukrainians and Lithuanians, demanded that they become independent nations. As Gorbachev was grappling with these fractures, along with a still flailing Soviet economy, a new rival leader came on the scene. Boris Yeltsin, a former Communist Party member, emphasized radical changes to the economy. In the summer of 1991, Yeltsin was voted president of the Russian Republic. Gorbachev now faced the problem of how to balance the shared power between him and the opposing leader.

In August 1991, while Gorbachev was vacationing in the Crimea, Communist conservatives captured him in a coup to seize power. Among the Communist Party conservatives who organized the coup was Prime Minister Pavlov, whom Gorbachev had hired to help him balance power with Yeltsin. Despite his opposing leadership, Yeltsin manned a resistance against the coup, and the coup ultimately failed. Upon Gorbachev’s return home, rumors circulated that he may have been in cahoots with the coup leaders. The public grew distrustful of Gorbachev and was increasingly supportive of Yeltsin, whom they now viewed as a hero.

By Christmas 1991, the Soviet Union had crumbled. Gorbachev inevitably stepped down from his position as president of the Soviet Union, handing over complete power to Yeltsin.

Watch "Mikhail Gorbachev: A Man Who Changed the World" on HISTORY Vault