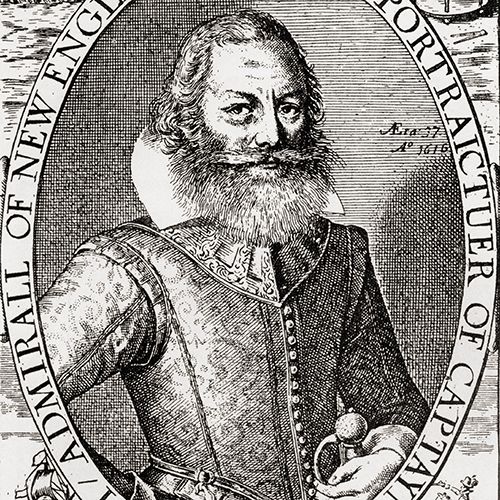 Who Was John Smith?

English soldier John Smith eventually made his way to America to help govern the British colony of Jamestown. After allegedly being saved from death by Pocahontas, he established trading agreements with native tribes. With his governing tactics called into question, he returned to England in 1609 and became a staunch advocate of colonization via his published works.

John Smith is believed to have been born in 1579 or 1580 in Lincolnshire, England. After a merchant’s apprenticeship, Smith decided on a life of combat and served with the English Army abroad. Working as a soldier for hire (and professing to be highly successful in his military ventures), Smith eventually embarked on a campaign against the Turks in Hungary. There he was captured and enslaved. He was sent to what is now Istanbul and served a kindhearted mistress who, not wanting Smith to be her enslaved person, sent him to her brother’s home, where he was forced to do farm work. After receiving harsh treatment from his master, Smith killed him and escaped, eventually returning to England in the early 1600s.

Smith then came to meet with Capt. Bartholomew Gosnold, who was involved with organizing a colony sponsored by the Virginia Company of London that would be sent to America. Smith was made part of a multi-person council that would govern the group, whose purpose was to generate profit in the form of mineral wealth and goods.

The voyagers set sail at the end of 1606. But during the trip, Smith was allegedly accused of mutiny and almost hanged. Managing to stay alive yet placed into custody, he arrived with the group at the Chesapeake Bay in April 1607.

The settlement was named Jamestown and would eventually be known as the first permanent British North American colony. Yet initially the population dwindled as colonists succumbed to starvation and disease. And the settlers were not alone, as they were attempting to claim a region that was home to multiple Native American communities, later understood to be part of the Powhatan Confederacy.

Released from custody weeks after arrival, Smith helped overturn the leadership of colony president Edward Wingfield. Working with new president John Ratcliffe, Smith was tasked with overseeing the barter of food from the surrounding native tribes. He had also started to explore the region, which would later be detailed in publications.

In an expedition along the Chickahominy River, Smith was captured by a native band and taken to Algonquin chief Wahunsonacock, whom the English referred to as Powhatan. It is said that Powhatan's 12-year-old daughter, Pocahontas, rushed to save Smith from being killed as he was held down. After this, Powhatan allegedly regarded Smith as a figurative "son," granting him territory while having expectations of allegiance and mutual protection.

(However, there are historians who question whether this event actually happened, as the relationship between Smith and Pocahontas has been largely romanticized by popular culture. It is also theorized that Smith might have been taking part in a ritualized acceptance ceremony as opposed to an actual execution. Powhatan possibly saw Smith as a resource in trade relations with the Europeans and the acquisition of arms, and hence wanted him alive.)

Upon returning to Jamestown, Smith was imprisoned for losing men on the failed Chickahominy expedition and on suspicion that he would try to usurp control of the colony with his new allies. He was soon freed and relations between Native Americans and the settlement went smoothly for a time. Pocahontas often visited the colony, arriving with her people as they brought goods.

In 1608, Smith dispatched a letter to England about what had been occurring, and it was published as the short-length A True Relation... of Virginia, hence being seen as the first book to come from American soil. In September of the same year, he was elected president of the governing council, going on to contend with a difficult winter. Smith demanded a staunch work ethic from settlers with the hope of increasing survival and utilized harsh measures to keep them in line.

Also, due to a debilitating drought, Native American food supplies were scarce, and the Powhatan community refused to supply limited rations without the requested recompense; Smith responded by waging attacks on natives—ordering the burning of villages in some cases—and stealing food. Native people were also imprisoned, beaten and forced into labor.

In 1609, after the Virginia Company had drafted a new charter for Jamestown, Smith was badly burned from a gunpowder explosion following more conflict with fellow colonists. He returned to England both to recover and face allegations of misconduct, thereby relinquishing leadership of the settlement. There are no records of a subsequent hearing or trial.

Back in Britain, Smith produced a published report on Virginia that included detailed descriptions of its tribal communities, flora, fauna and overall topography. In 1614, he visited the coast of Maine and Massachusetts and came up with the name "New England" to describe the region, as well as designating certain bodies of water.

Smith met Pochantas again after she traveled to England in 1616 with her husband John Rolfe and son Thomas. Believing that Smith was dead, she was astonished that he’d never informed her that he was alive or intervened as matters worsened between the colonists and the Powhatans.

After unsuccessful efforts to return to America, Smith increasingly focused on writing. He published more books that detailed his time abroad, pushing for imperialism and the colonization of New England. Some of his works include The Generall Historie of Virginia (1624); The True Travels, Adventures, and Observations of Captain John Smith (1630); and Advertisements for the Unexperienced Planters of New England, or Anywhere (1631). Smith tended to lie and vaingloriously recount his exploits, yet modern scholarship has verified portions of the information presented. He died in London on June 21, 1631.