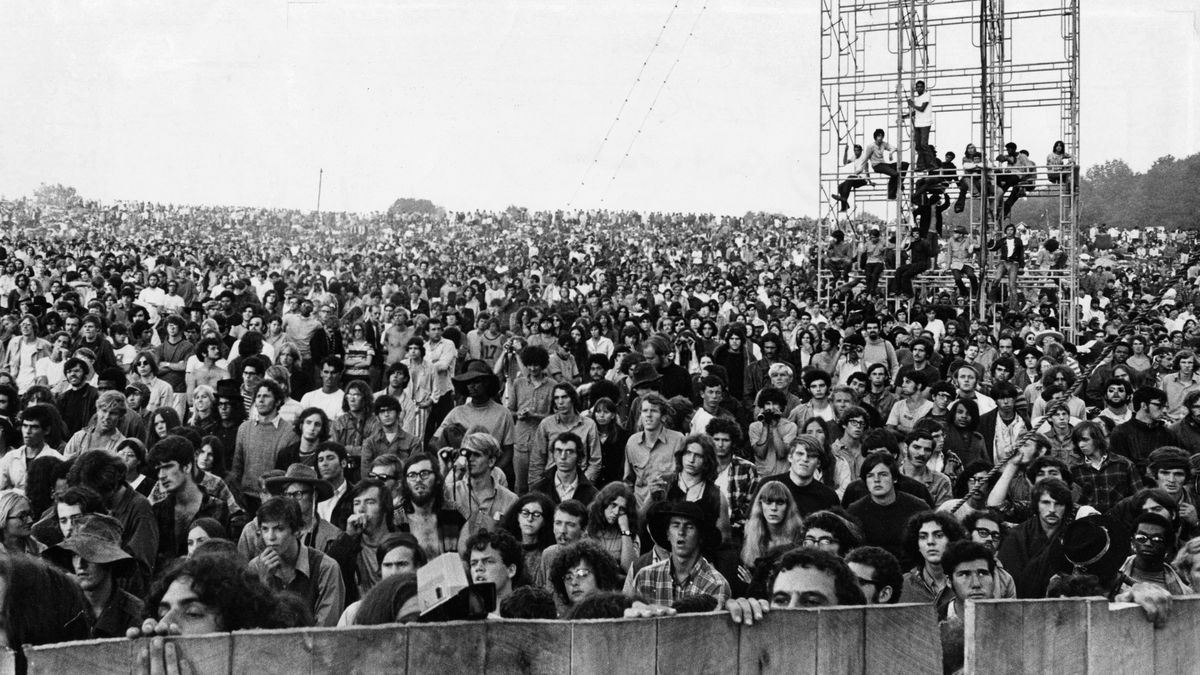 On August 15, 1969, thousands of people gathered at a 600-acre dairy farm in Bethel, New York, for what would become one of the biggest events in music history. The idea behind the first Woodstock musical festival — which was conceived by John Roberts, Joel Rosenman, Artie Kornfield and Michael Lang — was simply to raise enough money to build a recording studio in Woodstock, New York.

But the three days of “peace and music” that unfolded from August 15-18 far exceeded anyone’s expectations. Ahead of Woodstock, 186,000 tickets were sold — but the actual turnout was so high that the festival was opened up to the public for free. The festival, which featured 32 acts total, was chaotic, rainy, and forever changed the history of music.

Here’s a look back at some of the concert’s top acts: 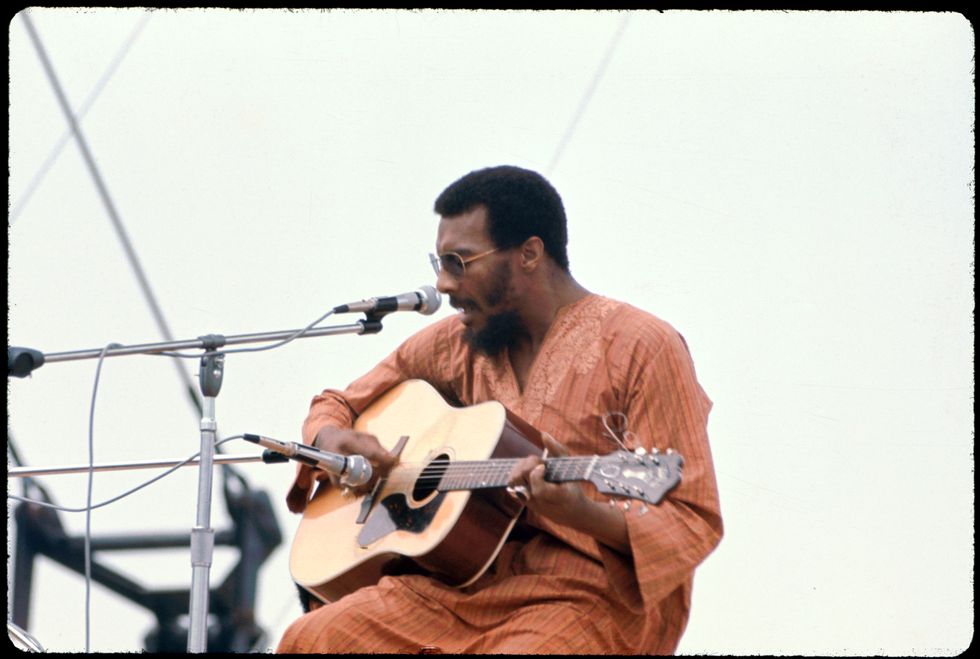 Richie Havens opened Woodstock at 5:07 p.m. on Friday evening, and because many of the other musicians were stuck in traffic, he was on stage for a while and claimed he’d played every song he knew. That came out to 11 songs total, including “From The Prison,” “With A Little Help From My Friends” and “High Flying Bird."

"One of my strongest memories of that day is flying in the helicopter over that vast, spectacular crowd that had already stretched back over the hills and well out of view of the stage. Looking down, my only thought was, "This is incredible. ... We're really here and they can't hide us anymore," Havens told CNN.com.

Arlo Guthrie, son of musician Woody Guthrie, started his set at 11:55 p.m. on Friday night. Supposedly on drugs during his rainy performance, Guthrie played seven songs in total. They included “Coming Into Los Angeles,” “Wheel Of Fortune,” “Every Hand In The Land” and “Amazing Grace.”

"One of the things that was interesting to me was that everybody at the time knew that we were in a history-making mode," Guthrie told Smithsonian.com. "It was plainly evident from the size of the crowd and the overwhelming factors like weather, roads and food that we were in the middle of a disaster. And we knew that it was historic in proportion. Nothing like this had ever happened before, planned or by surprise. When you realize that most historic events are written in hindsight – you don't realize you're in a historic event at the time – so it was special to be in a historic event and know that it was just that.

Folk singer Joan Baez, who was pregnant, was the last artist to perform on the first day, taking the stage around 1 am. After wishing everyone a good morning, she played through light rain. Her setlist was 14 songs total, featuring “Oh! Happy Day,” “I Shall Be Released,” “Swing Low, Sweet Chariot,” and “We Shall Overcome.”

"Oh, I had a lovely time at Woodstock. Flattered me, in a way — you saw all the big bands and their equipment, and yet they still let the little pregnant virgin walk out there with her guitar and do her thing," Baez told Rolling Stone in 1983. "It was wonderful. I mean, it wasn’t any f*****g revolution; it was a three-day period during which people were decent to one another because they realized that if they weren’t, they’d all get hungry."

Woodstock was a breakout moment for Santana. The band rose to fame when they performed “Soul Sacrifice” on Saturday, August 16 at around 2 pm — the performance helped propel their first album. Other songs on their set list included “Waiting,” “You Just Don’t Care,” “Evil Ways,” and “Persuasion."

"We were different — and I mean this in a soulful, gentle way — than the squares and curmudgeons. The real hippies, not the ones with the fake mustaches and fake hair and fake flowers, had ideals and principles about sharing. Songs like 'All You Need Is Love,' 'Imagine' or “'One Love,' those are hippie songs, because they believe in unity and harmony for the whole planet. Jesus was the first hippie that I know. He had long hair, and I know he was really high. He was passing around gluten-free bread and mercury-free fish," Carlos Santana told Billboard about his favorite memory from the festival.

Grateful Dead may have been one of the more famous performers at Woodstock, but their set didn’t exactly knock it out of the park. They played from 10:30 pm to midnight on the second day, but their entire performance was filled with technical difficulties. Rain flooded the stage (which put them in danger of electric shock), their heavy equipment crushed the stage and many of the songs were delayed. Over the course of their hour-and-a-half on stage, the band played “St. Stephen,” “Mama Tried,” “Dark Star,” “High Time” and “Turn On Your Lovelight.”

"Well, we played such a bad set at Woodstock," Grateful Dead's Jerry Garcia said in 1971. "The weekend was great, but our set was terrible. We were all pretty smashed, and it was at night. Like we knew there were a half million people out there, but we couldn't see one of them. There were about a hundred people on stage with us, and everyone was scared that it was gonna collapse. On top of that, it was raining or wet, so that every time we touched our guitars, we'd get these electrical shocks. Blue sparks were flying out of our guitars."

Creedence Clearwater Revival’s Woodstock performance began at 12:30 am on Sunday the 17th, and the band played for about 50 minutes. Although their set was on the shorter side (they were delayed because of the Grateful Dead), they managed to squeeze in 11 songs including “Born On The Bayou,” “Proud Mary" and “Suzy Q.”

“I come running out, and I look down there, and I see a bunch of people that look a lot like me except they’re naked. And they’re asleep. They were all kind of piled together. It looked like one of those pictures of the souls coming up out of hell, like Dante’s Inferno," CCR's John Fogerty wrote in his memoir, Fortunate Son: My Life, My Music. “Finally, I went up to the mic, kind of apologetically… and I said, ‘Well, hope you’re enjoying some of this!’ Way out there about a quarter mile, some guy’s flicking his lighter. He says, ‘Don’t worry about it, John! We’re with ya!’ So, in front of a half a million people for the rest of my big Woodstock concert, I played for… that guy.”

Woodstock was one of Janis Joplin’s early performances after breaking free of her band, Big Brother & The Holding Company. She played at Woodstock early Sunday morning, and her set list included “Raise Your Hand,” “Kozmic Blues" and “Piece Of My Heart.”

"I think she found it incredibly interesting and fun," Joplin's brother, Michael, said of the weekend. "Her quote was that it was wild. And the party atmosphere was going."

The Who's Roger Daltrey at the

Although The Who was scheduled for Saturday, they didn’t end up taking the stage until Sunday at 5 am. They played their famous rock opera album Tommy, and by the time they got to the album’s finale, the sun was rising.

“Looking out unto the predawn gloom of Woodstock, making out the vague shape of half a million mud-caked people as the lights swept over them, I felt in my sleep-deprived, hallucinating state that this was my nightmare come true,” singer Roger Daltrey wrote in his memoir, Thanks a Lot Mr. Kibblewhite. “The monitors kept breaking. The sound was shit. We were all battling the elements and ourselves. Music and peace.”

Hailing from San Francisco, the psychedelic/bluesy group Jefferson Airplane was scheduled for Saturday but didn’t perform until Sunday at 8 am. They played 13 songs, including “Somebody To Love,” “White Rabbit” and “The Ballad of You & Me & Pooneil."

"Woodstock was a lot of fun," singer Marty Balin recalled. "It was a muddy mess at times. I remember it being something really spectacular for me, the stage and the lights at night and the performances. But we didn’t get to go on until morning, and by then we had been drunk and re-sobered up and drunk again and sobered up. I mean, it was terrible by the time we went on. The sun was coming up, people were asleep in the mud. It was a corny time."

Joe Cocker went on stage at 2 pm on Sunday, and Woodstock was a pivotal moment in his career. His cover of “With A Little Help From My Friends” was a crowd-pleaser in particular, and shortly after he finished performing, the festival was hit with a thunderstorm that led to a two-hour delay.

“Were we epic? I dunno. We got some nice footage for memories,” Cocker said. “I was wearing a tie-dyed shirt, and when I took it off after, the colors had stained my chest in the exact same pattern.”

The R&B group Blood, Sweat & Tears didn’t get onstage until 1:30 am on Monday morning, and they played 10 songs total. They included “You’ve Made Me So Very Happy,” “And When I Die,” “Good Bless The Child” and “Spinning Wheel.”

"When you're on stage in front of six hundred and fifty thousand people you just know that this is a momentous event and probably will never happen again, and it never did," singer David Clayton-Thomas said.

When Crosby, Stills, Nash & Young performed at Woodstock, it was only their second gig together. Member Stephen Stills admitted to being “scared s******s.” The group played an acoustic set, an electric set and acoustic encores. The songs included “Suite: Judy Blue Eyes,” “Marrakesh Express” and “4+20,”

"We were all nervous," drummer Dallas Taylor admits. It was our time to prove ourselves. It was either we were gonna fail miserably or be a success. So, we were all scared. If you looked out and saw a sea of people, I imagine you'd be scared too, to play and be rejected. We were a new band. We were not well rehearsed."

Jimi Hendrix and his band, at that time called Gypsy Sun & Rainbows —and later Band of Gypsys — was scheduled as the last performance of the festival. Hendrix and his band played on Monday morning at 9 am, and the setlist included “Purple Haze," “Woodstock Improvisation” and a controversial version of “The Star-Spangled Banner," where he distorted the traditional sound of the anthem.

“I don’t know, man. All I do is play it. I’m American so I play it. They made us sing it in school so it’s a flashback,” Hendrix said on the Dick Cavett Show. " I thought it was beautiful."

Other artists that performed at the 1969 Woodstock Music and Art Festival: