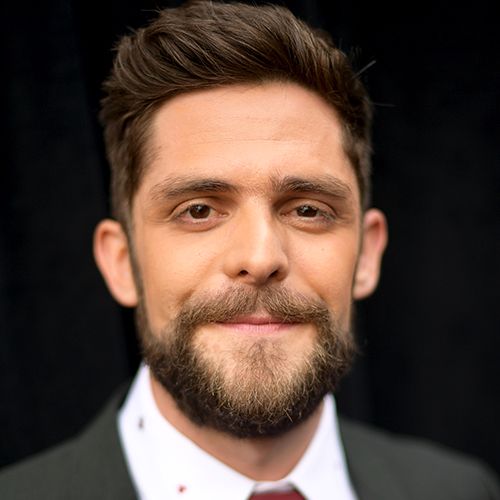 Who Is Thomas Rhett?

Thomas Rhett is a country singer and songwriter whose third album, Life Changes (2017), debuted at No. 1 across all genres of music. He is also known for hit songs like "Craving You," "Die A Happy Man" and "Marry Me." Rhett was named male vocalist of the year at the Academy of Country Music Awards in 2017, and has served as a judge at the Miss America pageant.

Thomas Rhett Akins Jr. was born in Valdosta, Georgia, on March 30, 1990. Rhett's father is renowned singer-songwriter Rhett Akins. In a 2013 interview, Rhett explained why he doesn't use his father's last name, saying, "I didn’t leave Akins out to convince people my dad wasn’t my dad. I’ve always been called Thomas Rhett. I didn’t want to get rid of it."

Rhett and his father have written songs together and their "Star of the Show" reached No. 1 in 2017. Akins was also one of the co-writers on "It Goes Like This," which in 2013 became Rhett's first No. 1 song. "Drink a Little Beer," from the album Life Changes, features Akins on the track.

The demands of his father's career contributed to his parents' divorce when he was nine, so Rhett initially promised his mother he wouldn't follow in his father's footsteps. However, when Rhett realized music was his calling, his mother supported him.

Rhett was not sure what career he wanted to pursue while attending Nashville's Lipscomb University; he studied business before moving on to communications.

However, Rhett remained connected to music — he was in a cover band (and had been the drummer in a punk rock band as a high schooler). After he landed a publishing deal, he dropped out of college when he was 20.

Rhett, who signed his record deal when he was 21, has said that Merle Haggard, Willie Nelson, The Rolling Stones and rap are among his musical influences.

Before his record deal, Rhett had launched a songwriting career. In addition to co-writing many of his own songs, he has been a writer for performers such as Jason Aldean ("I Ain't Ready to Quit"), Florida Georgia Line ("Round Here") and Scotty McCreery ("Write Your Number on My Hand"). He also shares a co-writing credit on many of the songs he's released, including "Marry Me," "Die a Happy Man" and "Unforgettable."

"Marry Me" was inspired by Rhett wondering what it would have been like if he had stayed silent about his feelings for his wife, and ended up watching her marry another man. In 2018, it became his tenth song to become No. 1 on the Billboard chart for country airplay.

"Craving You" was the first single to be released from Rhett's album Life Changes. The song, which features Maren Morris, has a pop flavor, though it stays true to Rhett's country roots. Before the release, he told GQ, "I definitely gravitate in a pop direction, but at the end of the day, there is no changing this voice that God gave me. It’s Southern by the grace of God."

Rhett has said that wife Lauren was the inspiration for "Die a Happy Man," a single from his second album Tangled Up (2015). He revealed to People magazine, "I really did just wake up one day and was like, 'I have yet to write a song about her.'" Lauren also co-starred with Rhett in the video, which has well over 100 million views on YouTube.

The song stayed atop the Billboard Hot Country Songs chart for an impressive 17 weeks. Hip-hop artist Nelly liked it so much that he created his own cover version.

This single, which also reached No. 1 on the Billboard Country Airplay chart in 2017, is about a man recalling the night he met his wife. However, it's not a direct recounting of Rhett's own relationship; he said the tune is, "Not really super personal to me and Lauren's story."

Rhett's third album, Life Changes (2017), draws inspiration from events in his life. It reached No. 1 on the Billboard 200 when it was released, making Rhett the first country star to top that chart in 2017.

Rhett won male vocalist of the year at the Academy of Country Music Awards in 2017; he was nominated again in 2018 but did not win.

Rhett's fourth album, Center Paint Road, was released in May 2019. The lead single, "Look What God Gave Her," peaked at No. 5 on the Hot Country Songs chart. The album was nominated for Best Country Album at the 2020 Grammy awards.

'Country Again: Side A'

Rhett's fifth studio album, Country Again: Side A, came out in April 2021. It's the first part of a double album release, with Side B coming out later in the year.

On October 12, 2012, Rhett wed Lauren Gregory (who now goes by Lauren Akins). The two share a long history, having met in kindergarten, attended the same church camp and dated a bit in high school.

Rhett and Lauren each considered marrying other partners while in college. But those relationships were over when they met again in 2011 at a graduation party for her sister. With encouragement from Lauren's father, Rhett confessed his feelings. They got engaged in December 2011.

In 2016, Lauren joined the non-profit organization 147 Million Orphans on a trip to Uganda, where she met an orphaned baby girl. At that point the couple had been unsuccessful in trying to conceive and were talking about adoption; after Rhett saw a photo of Lauren and the baby, he suggested they try to adopt this girl.

The complicated foreign adoption process was underway when Rhett and Lauren were surprised to learn Lauren was pregnant. They were able to complete the adoption of 18-month-old Willa Gray in May 2017 before their second daughter, Ada James, was born on August 12, 2017. In February 2020, the couple welcomed their third daughter, Lennon Love.

In May 2021, the pair announced they are expecting their fourth daughter in November 2021.