There’s no denying that The Beatles and Muhammad Ali were all skilled at delivering powerful hits in their own rights. It wasn’t until February 18, 1964, however, that their paths eventually crossed at Miami Beach’s 5th Street Gym. New British rockers George Harrison, John Lennon, Paul McCartney, and Ringo Starr — otherwise known as the Fab Four — were stateside for a live Ed Sullivan Show performance when they met a largely unknown 22-year-old underdog boxer named Cassius Clay. For his part, the fighter, who would, weeks later, change his name to Muhammad Ali, was in Miami to get in the ring for a bout with the heavily favored Heavyweight Champion Sonny Liston.

To drum up publicity while in the United States, the boys from Liverpool actually first approached Liston to participate in a photo op ahead of the match. When Liston unequivocally refused — and even reportedly threw some metaphorical jabs at the band — the Beatles rolled with the punches and recruited his opponent instead. Photographer Harry Benson captured the meeting of the legends that day in a series of pictures worth far more than a thousand words.

At the time, neither Ali or the musicians really knew of each other, and, by all accounts, Ali didn’t make the best first impression. Journalist Robert Lipsyte, who had traveled to Miami to cover the fight for The New York Times, remembers a tense beginning, with Ali arriving extremely late.

"Somebody said that ‘Clay’s not here' and the four guys cursed you know and said, ‘We’re the F out of here,’ and turned around, but … I guess Clay’s people wanted a photo op too so they just kind of pushed all of us up the stairs and I went into this dressing room with these guys, I didn’t know who they were, I wasn’t intimidated,” he later recalled. “The five of us are in the dressing room and the door is locked, they’re screaming and banging on the door, they were very angry … and they started banging on the door and cursing and they were very angry at having been abducted.” 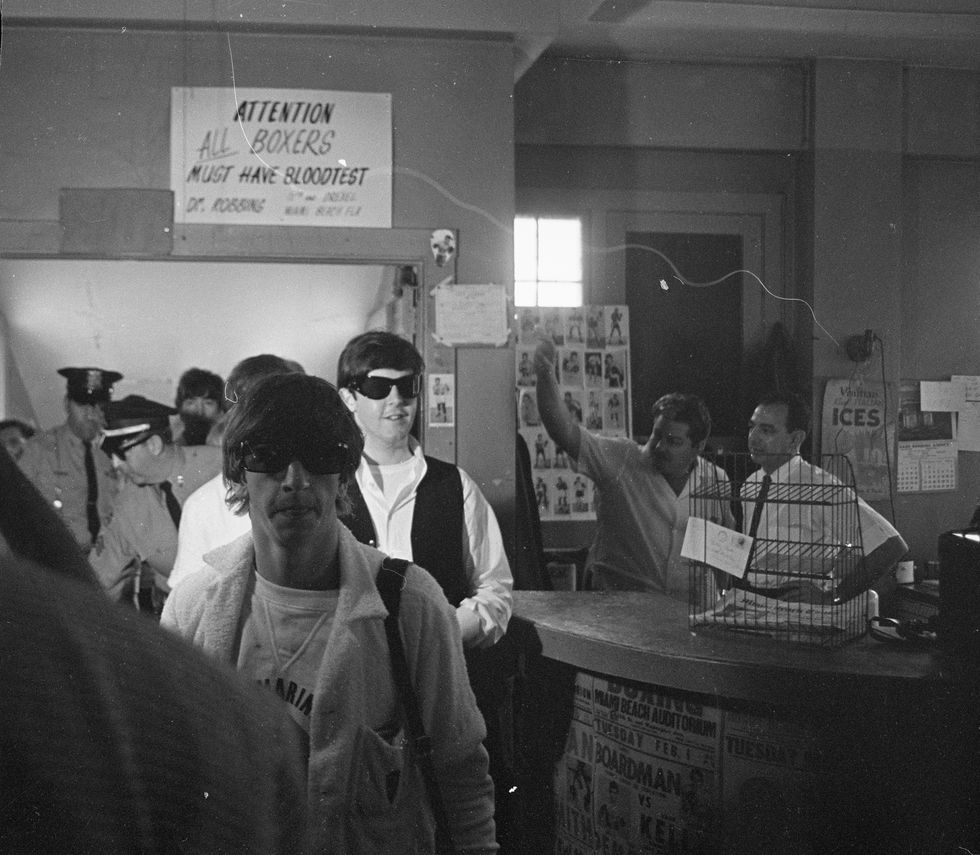 Ringo Starr and Paul McCartney at the 5th Street Gym in Miami, where they met American heavyweight boxer Muhammad Ali during the run-up to his title fight against Sonny Liston in 1964
Photo: Chris Smith/Popperfoto/Getty Images

Ali joked that they should join forces and 'make some money'

But suddenly, Lipsyte explained, a towering Ali — clad in his boxing shorts — appeared, eclipsing a doorway, and all of The Beatles gasped in unison. Ali quickly broke the ice.

“Hello there, Beatles! We oughta do some road shows together. We’ll get rich!” Ali said, according to Lipsyte. (Other reports claim he, instead, said, “Hey, Beatles, let’s go make some money!”)

Soon after, Benson snapped the famed photos of all five men goofing around in the gym. In one shot, the music group pretended to fall like dominoes after Ali intimated a punch towards Harrison. Another image showed the boxer lifting Starr, while his bandmates laid on the ground as if they’d just gotten KO’d. At one point, Ali reportedly told The Beatles, “You ain’t as dumb as you look!” Fired back Lennon, “No. But you are!” Following a brief awkward silence, the whole group erupted in laughter.

Ali also lightened the mood by improvising freestyle, per a UPI reporter, who was also in the room: “When Liston reads about The Beatles visiting me / He’ll get so mad, I’ll knock him out in three!” (In a major upset, Ali actually ended up defeating Liston in three rounds and declared himself “the Greatest.”)

In reality, Ali didn't know anything about The Beatles and called them 'sissies'

Despite all the good-natured camaraderie between Ali and The Beatles, Lipsyte added that after sneaking in a workout at the gym, the six-feet-two-inches boxer retired to the dressing room for a massage and approached the journalist with a blunt question. According to Lipsyte, Ali asked him just who exactly “those little sissies” were.

Even if he didn’t know who they were, Ali helped The Beatles, who went on to sell more than 250 million records worldwide, begin to recognize that their star was also rapidly rising.

“Obviously we were having an effect, because all these people were clamoring to meet us – like Muhammad Ali, for instance,” Harrison noted in The Beatles Anthology. “We were taken to meet him on that first trip. It was a big publicity thing. It was all part of being a Beatle, really – just getting lugged around and thrust into rooms full of press men taking pictures and asking questions. Muhammad Ali was quite cute. He had a fight coming up in a couple of days with Sonny Liston. There is a famous picture of him holding two of us under each arm.”

Starr also discussed the Beatles’ day in the ring with Ali in Anthology, joking: “I taught [Ali] everything he knew! That was a thrill, of course, and I was putting my money on Liston, so I really knew what was happening!”

It came as little surprise, then, that following Ali’s June 2016 death — from “septic shock due to unspecified natural causes,” per the family’s spokesperson — Starr paid homage to the legend and one of the best boxers of all time. “God bless Muhammad Ali peace and love to all his family,” he tweeted.

Following suit, McCartney also honored Ali on Twitter — and looked back fondly on that day in 1964 at 5th St Gym. “I loved that man,” he wrote. “He was great from the first day we met him in Miami, and on the numerous occasions when I ran into him over the years. Besides being the greatest boxer, he was a beautiful, gentle man with a great sense of humor who would often pull a pack of cards out of his pocket, no matter how posh the occasion, and do a card trick for you. The world has lost a truly great man.” 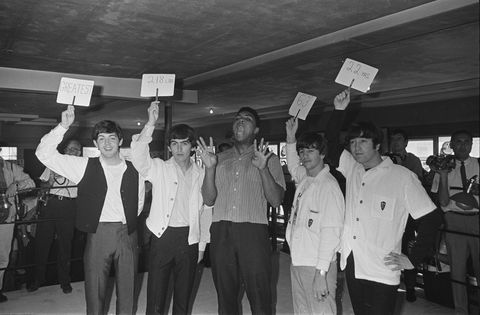