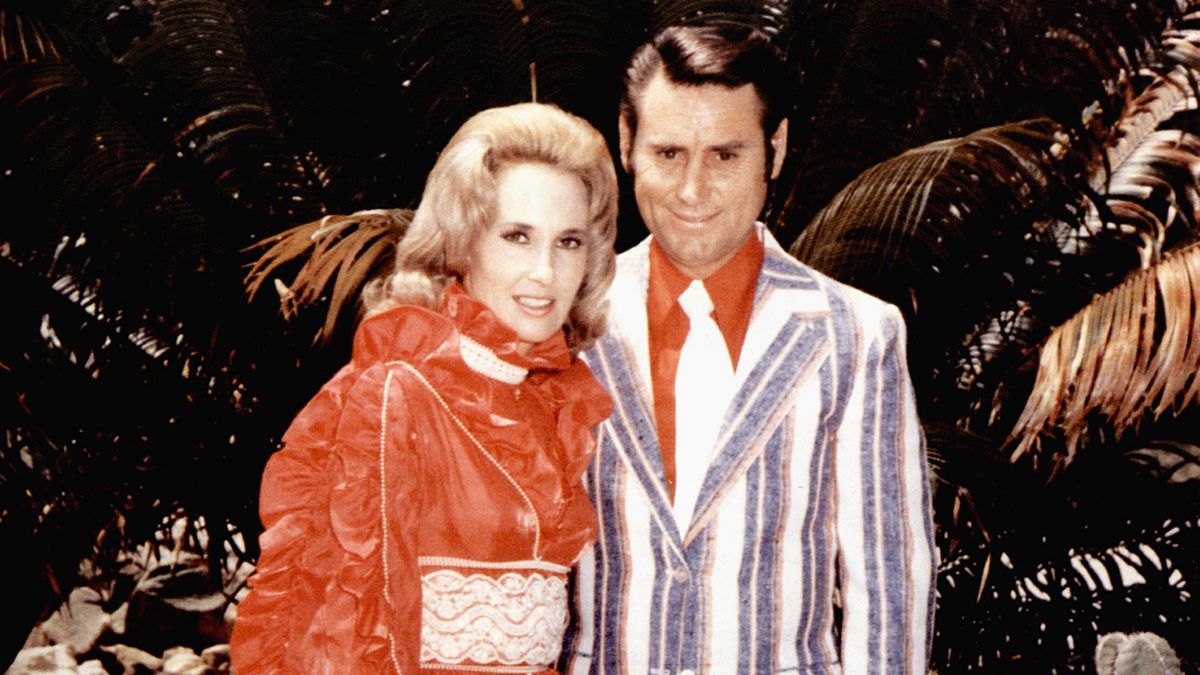 Tammy Wynette may have been known for her 1968 breakout hit "Stand By Your Man," but she didn't stay true to that motto when it came to her relationship with third husband George Jones. She'd once described their dynamic as, "I was naggin' and he was nippin'," a reference to Jones' drinking and the fights that ensued. However, their time together encompassed much more than conflict. They created powerful country duets, found success on tour and started a family. After divorcing in 1975, Jones and Wynette would always remain a part of each other's personal and professional lives.

Wynette and Jones were both married twice before meeting each other

As Wynette was starting to achieve success in country music, she was struggling when it came to love: She split from her first husband before heading to Nashville, and the man she'd married in 1967, songwriter and motel clerk Don Chapel, secretly took and shared nude photos of her. Meanwhile, after two divorces, the second one of which took place in 1968, country star Jones had sworn he wouldn't marry again until turning 69.

Yet Wynette and Jones were drawn to one another. They met at a Nashville recording studio, then improved their acquaintance on the road. The connection they shared was helped along by the fact that Jones had been Wynette's childhood idol. In 1968, Jones declared his love for Wynette while she was fighting with her husband. This prompted Wynette to admit she loved him, too. She then drove off with Jones, accompanied by her three daughters from her first marriage.

Wynette and Jones' union took their careers to a new level

Wynette quickly flew to Mexico and got divorced (though this was apparently unnecessary, as she'd married so soon after the end of her first marriage that the second was invalid). On February 16, 1969, Wynette and Jones wed. The next year, Wynette gave birth to a daughter, whom they named Tamala Georgette.

Marriage was more than personal for Wynette and Jones. Each had been extremely successful as solo acts, but now their careers were intertwined. Jones signed with Wynette's label, which made it even easier for them to collaborate — and their singing together was truly special. The duet "Take Me" from their first album, We Go Together (1971), became a hit. Their song "The Ceremony" was a duet of their wedding vows.

Jones and Wynette began touring together in a bus that proclaimed they were "Mr. and Mrs. Country Music." They were content to vary top billing depending on who would be the bigger attraction for a venue. Their focus was on performing. "When we were onstage," Jones shared, "we were in our own little heaven." 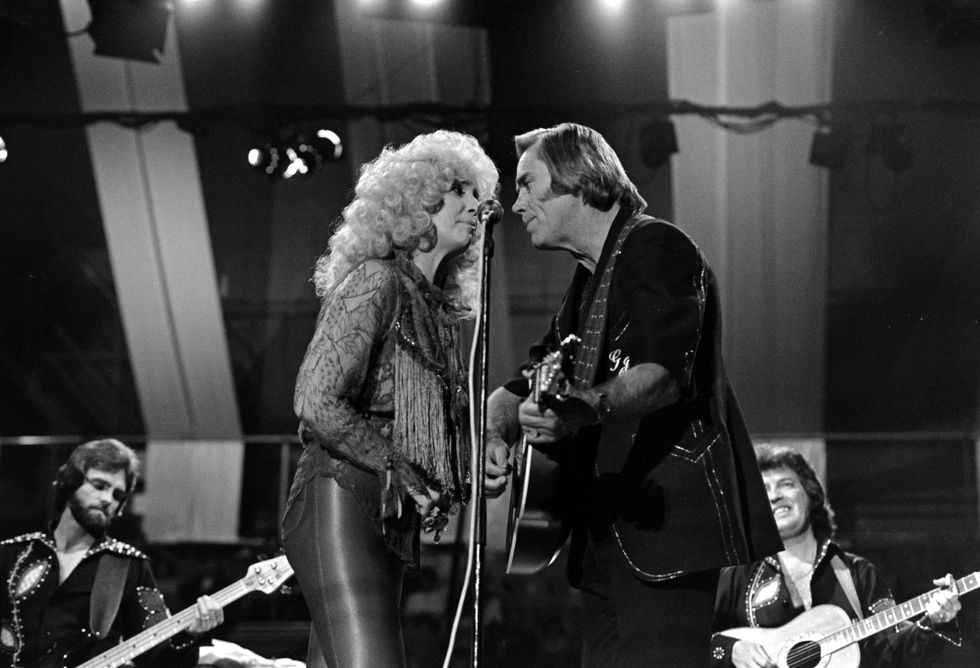 The pair split, filed for divorced, reconciled and then officially divorced

Yet success didn't result in a happy home life. Jones continued the excessive drinking he'd indulged in before the marriage and the pair often fought. Wynette recounted in her 1979 autobiography that Jones once chased her through their home with a loaded rifle (though Jones disputed this in his own 1996 memoir). In 1973, she filed for divorce.

The two soon reconciled, with Wynette explaining that the divorce filing had been an attempt to rein in Jones' drinking. Another successful duet, "We're Gonna Hold On," followed. However, their relationship problems continued. When they fought after Jones missed a recording session, Jones' response was to buy a Cadillac and head to Florida.

Wynette again filed for divorce. "George is one of those people who can’t tolerate happiness," she revealed. "If everything is right, there is something in him that makes him destroy it, and destroy me with it." The divorce was granted in March 1975. Jones later stated, "I let Tammy have everything — didn't fight it." Wynette ended up with their band, the tour bus, their house in Nashville and custody of their daughter.

Post-divorce, Jones said they got 'along better than we ever did'

After the split, Jones, who would later say he'd "ached about our divorce," sometimes drove from Alabama to Nashville just to spin through the driveway at the home they'd formerly shared. At some shows, Jones altered lyrics to refer to "Tammy," singing that she'd "walked out the door."

Mother's Day in 1976 saw Jones present Wynette with a new Thunderbird. That year they exchanged Christmas gifts as well. In 1977, Jones told People, "Tammy and I are getting along better than we ever did when we were married. I think we still love each other. I know I love her."

The pair, who continued to share a label and management team, still sang together. In 1976 they released the No. 1 duets "Golden Ring" and "Near You." But their careers were impacted by the divorce. Fans would shout, "Where's George?" during Wynette concerts, while Jones was in a downward spiral. Drinking and a newly acquired cocaine addiction had him missing so many concerts that he ended up with the nickname "No Show."

"With George gone, I felt utterly lost and lonely," Wynette would confess. She dated Burt Reynolds and entered into a brief marriage with a real estate executive. In 1978, she settled down with her fifth husband, George Richey, a songwriter who became her manager. In 1978 she filed a lawsuit against Jones for unpaid child support.

In October of that year, Wynette was allegedly kidnapped at gunpoint by a man who beat and strangled her before throwing her from a car. Some speculated that a jealous Jones or an out-of-control Jones fan may have been behind the supposed crime, though Wynette didn't voice these accusations. The case was never solved. One of Wynette's daughters would later write that her mother had concocted the story to cover for Richey beating her (something Richey denied).

Jones and Wynette continued to duet, putting out songs such as "Southern California" (1977) and "Two Story House" (1980). Though Jones' problematic behavior had hurt his career, in 1980 Wynette said, "Everyone needs more than one chance."

Despite a rocky past, the two remained close until Wynette's death

Jones met Nancy Sepulvado in 1981 and they married two years later. She was by his side as he fought his addictions, and he credited her with saving his life. Facing his demons also allowed Jones to resume his career. Meanwhile, Wynette's health was worsening – she had a hysterectomy, multiple operations that included partial stomach removal and an addiction to painkillers.

In December 1993, Wynette was hospitalized for an infection that left her on the brink of death. Though Jones had been out of touch with his ex-wife, he and Nancy came to visit Wynette. This served as the beginning of another stage in their relationship. In 1995, the former partners reunited for the duets album One and another tour. Wynette appreciated their being back together, noting, "There’s something about George and me that makes our voices blend."

After years of ill health, Wynette died on April 6, 1998. "I am just very glad that we were able to work together and tour together again," Jones said after her passing. "In the end, we were very close friends, and now I have lost that friend. And I couldn’t be sadder." Their accomplishments and history were also remembered after Jones' death on April 26, 2013.