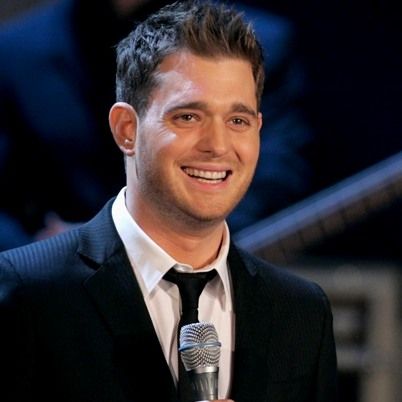 Who Is Michael Buble?

Michael Bublé is a classic jazz and soul singer who cites Stevie Wonder, Frank Sinatra and Ella Fitzgerald as his major influences. At age 17 he entered and won the British Columbia Youth Talent Search, launching his career. Since then, he has had several No. 1 songs and albums and has won several awards.

Singer and actor Michael Steven Bublé was born on September 9, 1975, in Burnaby, British Columbia. Bublé's father, Lewis, was often out at sea. This left his mother, Amber, and grandfather, Demetrio Santanga, as the primary caregivers for Bublé; and his two younger sisters, Crystal and Brandee.

Santanga's huge collection of records was the foundation of Bublé's passion for classic jazz and soul music. Thanks to famed artists such as Ella Fitzgerald, Stevie Wonder, Frank Sinatra and Tony Bennett, it wasn't too long before young Michael decided that he wanted to follow in their famous footsteps. Said Bublé, "I wanted to be a singer and I knew that this was the music that I wanted to sing."

With the encouragement of his grandfather, Bublé entered and won a local talent contest. When the organizer, Beverly Delich, later discovered that Bublé was only 17—one year younger than the contest requirements—she disqualified him. Even still, she was so impressed by his talents that she suggested he enter the British Columbia Youth Talent Search instead. Having learned all of his grandfather's favorite tunes, Bublé entered the British Columbia competition and won.

Bublé's success prompted Delich to help him record his first independent CD. In the meantime, Santanga had spread the word that he would offer free plumbing service for anyone who could provide career opportunities for his grandson. Bublé became a regular at several local music venues.

In 1996, Bublé landed a role portraying Elvis in the Vancouver run of the musical Red Rock Diner, and soon caught the eye of Debbie Timuss, a fellow dancer and singer in the production. Two years later, the couple moved to Toronto to perform in the cast of another musical revue; this time a big band effort called Forever Swing (1998).

But Bublé's real break came during a performance at a party for Michael McSweeney, a former advisor to the Canadian prime minister. McSweeney was so impressed with Bublé's performance that he began circulating the performer's independent album, which soon fell into the hands of Prime Minister Brian Mulroney and his wife. In 2000, the couple invited Bublé to sing at their daughter's wedding. At the event, he wowed the bride and her guests with a rendition of Kurt Weill's "Mack the Knife."

During the festivities, the singer was introduced to wedding guest David Foster, a Grammy-winning producer and Warner Bros. music executive. The following year, Foster signed Bublé to the 143 Records label, and the two began work on the singer's first major-label release. "The last thing we wanted to do was a tribute album or a lounge act," says Bublé. "We wanted to treat this music with the love and respect it deserves, but the important thing was to capture a spirit and energy and that wasn't confined to any particular musical era."

In 2003, Bublé's first major album was released. The self-titled record was a worldwide success, hitting No. 1 in Australia, going multiplatinum in many countries, and reaching the Top 10 in the UK as well as Canada. The debut album incorporated Bublé's multifaceted talents, especially his aptitude for lending a pop style to old classics such as "Fever," "Moondance" and "How Can You Mend a Broken Heart?" A world tour followed, and Bublé ended 2003 with a disc of Christmas tunes entitled "Let It Snow."

In 2004, at the age of 28, Bublé officially arrived on the international music scene, winning Best New Talent at Canada's prestigious Juno Awards. His third album release, It's Time (2005), topped the success of his debut; it sold over five million copies worldwide and remained on the Billboard Jazz charts for two years. The album's single, "Home," was a fan favorite, which Bublé wrote it for long-term love Timuss, and featured her in the video as well as the backing vocals. The song shot to the No. 1 spot in more than 10 countries, and had the distinction of being the most played song on Canadian radio that year.

Later that year, Timuss and Bublé split amid rumors of his infidelity. News soon spread that the break-up had coincided with the emergence of a new relationship—a romance with British actress Emily Blunt. The pair had met backstage at an awards ceremony. Bublé later admitted he had no idea who she was at the time, and thought she was a television producer.

Bublé's third album, Call Me Irresponsible, was released in 2007, and the album debuted at No. 3 on the Canadian charts. That album brought the singer his first Grammy win, taking Best Traditional Pop Vocal Album. Bublé's critics and fans rushed to sing his praises, especially lauding the Timuss-inspired track "Lost." He reportedly wrote the track "Everything" for Blunt, but the couple parted ways in July of 2008. The broken romance didn't keep the musician from his success, however, and by the summer of that year Bublé had sold more than 18 million albums worldwide.

In December of 2008, Bublé branched out into the world of sports when he became a minority owner of the ice hockey team, the Vancouver Giants. He has also began taking on television projects, participating in a documentary called Music and the Brain on Canadian TV that discusses the scientific effects of music on human cognition. He then scored a special musical arrangement for a new episode of the hit American sitcom 30 Rock.

In addition to his popularity with fans, Bublé has swept music award ceremonies all over the world, earning another Grammy in the U.S. (2009), one Juno award and five Juno nominations in Canada, a nomination at the Brit Awards and a nomination for an international ECHO award. He has gone on to win the Grammy for Best Traditional Pop Vocal Album a total of four times (2007, 2009, 2010, 2013).

After Bublé and Emily Blunt's relationship ended in 2008, the singer began dating Argentine actress Luisana Lopilato, whom he'd met at a party following a concert in Buenos Aires. He wrote the song "Haven't Met You Yet" for Lopilato and she also appeared in the music video. The couple married on March 31, 2011, in Buenos Aires. Their son, Noah, was born on August 27, 2013, in Vancouver, Canada. On January 22, 2016, they welcomed son Elias to the family.

In June 2015, Noah was burned in a minor accident at the couple's home in Argentina. He was treated and released from the hospital without requiring surgery. The following year, more bad fortune struck when the boy was diagnosed with liver cancer. However, Noah's treatment reportedly went well, with Bublé feeling confident enough in his condition to make his return to the stage with a concert in Dublin, Ireland, in early July 2018.

Late that month, the singer confirmed that his wife had given birth to their third child, daughter Vida Amber Betty Bublé.