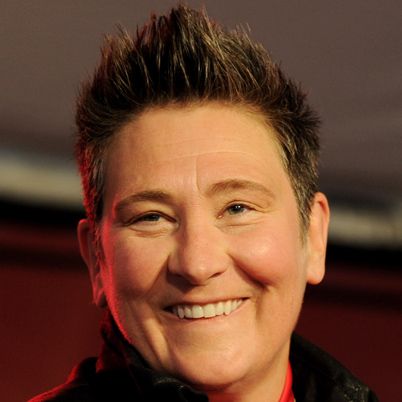 Singer k.d. Lang was born in Canada and grew up in the town of Consort. Lang started singing as a child and began her musical career after attending Red Deer College. She released her debut album in Canada in the early 1980s. In 1986, Lang tried to break into the American country music scene with Angel with a Lariat. The following year, she had her first country hit, a duet with Roy Orbison. Switching to a more traditional pop vocal style, Lang had her biggest pop hit in 1992 with "Constant Craving." Since then, she has recorded numerous albums, including her 2002 collaboration with Tony Bennett, A Wonderful World. Lang was inducted into the Canadian Music Hall of Fame in 2013.

Born Kathryn Dawn Lang on November 2, 1961, in Alberta, Canada, country singer k.d. Lang grew up the youngest of four children in the small town of Consort, Alberta. As she once told The New York Times, the place was so small that "you knew everyone from the day you were born till the day you could get yourself out there."

Music was an important part of Lang's youth, and she began demonstrating her significant vocal talents as a child. Her mother, a teacher, drove more than a hour to take Lang and her siblings to their piano lessons each week. Her piano instruction would prove to be the inspiration for her future career. When Lang was 12 years old, her parents split up, and music provided some solace.

While a student at Red Deer College, Lang appeared in a production about Patsy Cline. During rehearsals, she became entranced with the life and music of the country music legend. Subsequently, after graduating from college, Lang began to pursue her own music career. With musician and songwriting partner Ben Mink, Lang formed a group called the Reclines in Patsy's honor.

With the Reclines, Lang enjoyed some success in her native Canada. She made her debut with the well-received Friday Dance Promenade and established her reputation with A Truly Western Promenade in 1984. The following year, the Juno Awards selected Lang as the "most promising female vocalist." After landing a contract with Sire records, in 1986, the androgynous-looking country star launched her career in the United States.

Lang impressed critics with her 1986 album, Angel with a Lariat, but country fans didn't truly begin to warm up to the singer until the following year. In 1987, Lang released a duet with Roy Orbison, a new recording of his 1961 hit "Crying." In addition to putting Lang on the country charts for the first time, this song brought garnered the country singer a Grammy Award win for best country vocal collaboration.

Lang fared even better with 1989's Shadowland. The album featured two country hits: "I'm Down to My Last Cigarette" and "Lock, Stock and Teardrops." For the record, Lang had a chance to work with Owen Bradley, a producer of Patsy Cline's music. She was also accompanied by some of her idols on one of the tracks. Loretta Lynn and Kitty Wells sang with her on "Honky Tonk Angels' Medley."

While individual country stars such as Minnie Pearl and Loretta Lynn sang her praises, k.d. Lang was never fully accepted by the country music establishment. As she once explained to People magazine, "I was there in Nashville, a lesbian, a vegetarian, a Canadian, and trying to get in with this white, male, Christian society. They were like, 'What the hell are you doing here, girl?'"

With 1992's Ingenue, Lang seemed to shed much of her country style in favor of a more adult contemporary sound. The popular album featured her biggest pop hit to date: "Constant Craving." She followed up this successful recording with an unusual venture: composing the soundtrack to 1993's Even Cowgirls Get the Blues. Continuing her musical journey, Lang experimented with different styles on All You Can Eat in 1995. Two years later, she released the smoking-themed effort Drag.

Lang made a guest appearance on Tony Bennett's Playin' with My Friends: Bennett Sings the Blues (2001), which led the pair to team up for a collaborative album. In 2002, Lang and Bennett honored the late Louis Armstrong with the Grammy Award-winning A Wonderful World, an album of their own takes on Satchmo's trademark songs. Bennett, a veteran crooner, had nothing but high praise for Lang, calling her "the best singer since Judy Garland" in an NPR interview.

Returning to her roots, Lang recorded Hymns of the 49th Parallel (2005), a collection of songs written by other Canadian artists. She even sang her widely praised rendition of Leonard Cohen's "Hallelujah" at the 2010 Winter Olympics in Vancouver, Canada. Her next major work was 2008's Watershed, noted for its country rock flavor. More recently, Lang released Sing It Loud (2011).

In 2013, Lang was inducted into the Canadian Music Hall of Fame. "A gift to music, k.d. Lang's voice is an instrument unto itself—uniquely beautiful and haunting," said Melanie Berry, president and CEO of the Canadian Academy of Recording Arts and Sciences and the JUNO Awards, in a statement on the organization's website. Berry also called Lang "one of our most accomplished singer-songwriters of all time."