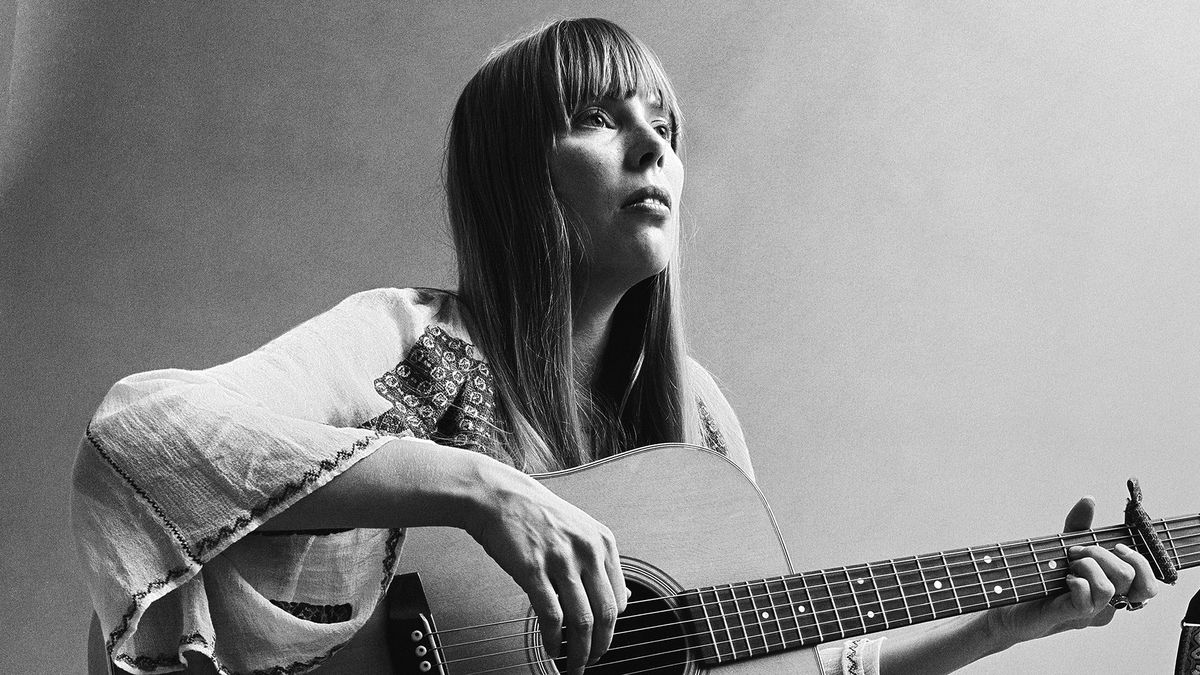 Joni Mitchell composed and sang all of the songs on Blue, on which she came into her own as an artist. The 1971 album spotlighted her musical genius, became her first album to sell more than a million copies, and earned admirers ranging from Bob Dylan and Prince to Taylor Swift. Per Mitchell, Blue was "probably the purest emotional record that I will ever make in my life." She found inspiration for the album in a wellspring of emotions, drawing on everything from romantic entanglements to her decision to put a child up for adoption.

Mitchell felt like she 'had absolutely no secrets from the world'

Much of Blue resulted from drawing back the curtain on Mitchell's innermost struggles. She said in 1979, "The Blue album, there's hardly a dishonest note in the vocals. At that period of my life, I had no personal defenses. I felt like a cellophane wrapper on a pack of cigarettes. I felt like I had absolutely no secrets from the world and I couldn't pretend in my life to be strong. Or to be happy. But the advantage of it in the music was that there were no defenses there either."

Mitchell was inspired to bare her personal regrets and roadblocks by fellow singer-songwriter Dylan. Though she’d written intimate songs before, hearing Dylan’s first-person narrative approach led to her pushing past old limits. "There came a point when I heard a Dylan song called 'Positively Fourth Street' and I thought 'oh my God, you can write about anything in songs.' It was like a revelation to me," she said. Among Mitchell's fully exposed emotions on Blue are the melancholy she shared in the title song.

The album's rawness prompted her friend Kris Kristofferson to urge Mitchell, "Please! Leave something of yourself." And Mitchell said of Blue in 2013, "I was being told that people were horrified by the intimacy of it. People said it was shocking. It wasn't. It was about human nature. It's all I had to work with. It's a soul trying to find itself and seeing its failings and having regrets. What's so horrible about that?" However, Mitchell succeeded in reaching the millions who loved and felt a connection to the album. 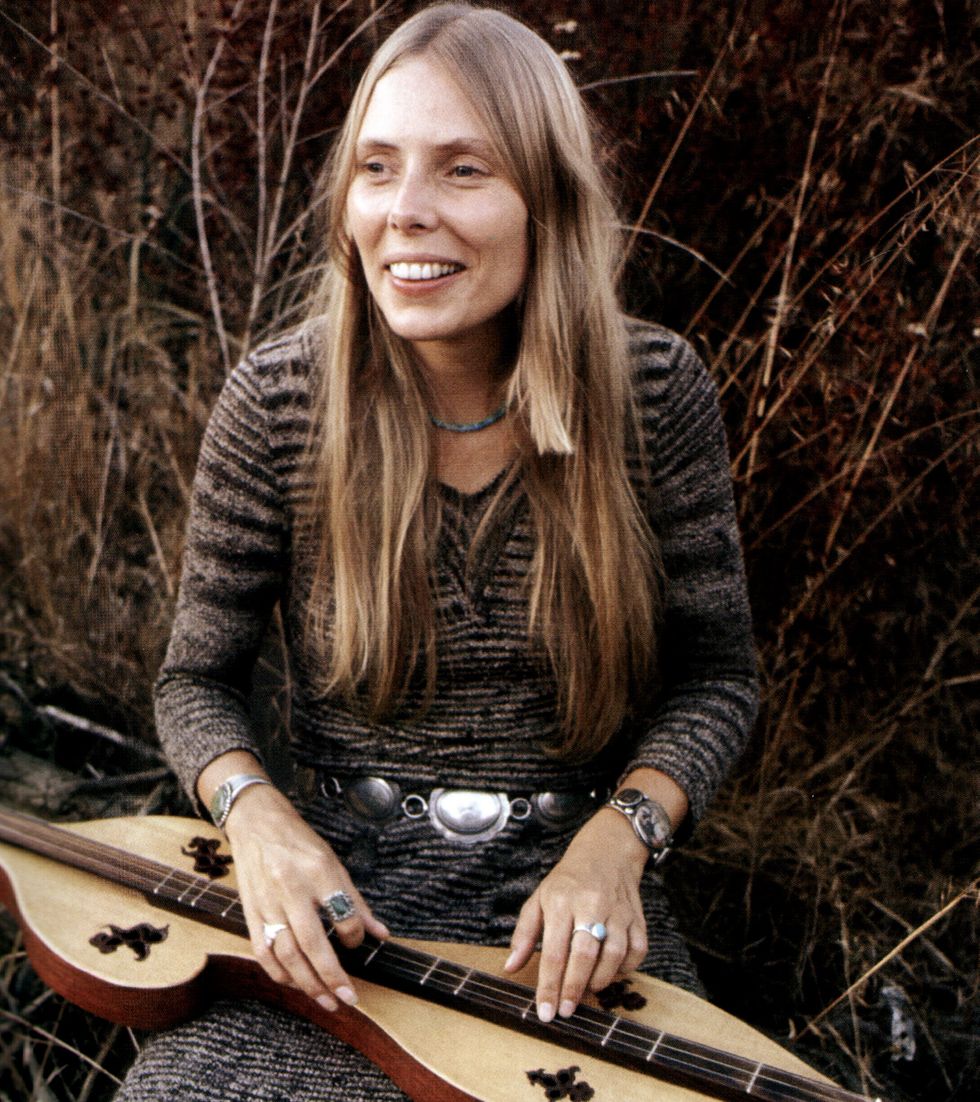 Mitchell wrote 'Blue' after putting her daughter up for adoption

Why was Mitchell in such a vulnerable state while working on Blue? One reason was her earlier decision to place her daughter up for adoption. In 1965, an unwed Mitchell gave birth to a girl in Canada. The father was out of the picture, and at the time young single mothers were subjected to societal scorn. Mitchell explained her situation to the Los Angeles Times in 1997: "The scandal was so intense. A daughter could do nothing more disgraceful. It ruined you in a social sense. You have no idea what the stigma was. It was like you murdered somebody."

Facing these challenges, as well as the basic economic struggle of being a 21-year-old young woman with no way to provide for herself and her daughter, Mitchell put the baby up for adoption. However, the choice haunted her. She later said, "Why I wrote those songs on Blue, the point is that soon after I'd given up my daughter for adoption I had a house and a car and I had the means and I'd become a public figure. The combination of those situations did not sit well. So I kind of withdrew from music and began to go inside. And question who I was. And out of that, Blue evolved."

The daughter Mitchell had to give away also inspired one of Blue's songs. "Little Green" addressed the sense of loss and sorrow that Mitchell had to live with after she let her child go in the hopes of providing her with a better life. (In 1997, Mitchell's questions about what had happened to her birth daughter were answered when the two reunited.)

The emotional toll romance can take offered additional inspiration for Blue; most of the songs on the album are about romantic relationships. These include "A Case Of You," in which Mitchell brings joy to a look at how all-consuming and transformational love can be. It's thought the song was inspired by Mitchell's intense relationships with fellow musicians Leonard Cohen and James Taylor.

Mitchell's "River," which has entered the holiday canon, delves into the regrets that linger after a relationship is over and done with. It also lists how her own faults contributed to its end. Mitchell's failed romance with fellow musician Graham Nash is assumed to have provided the fodder for this song. She hasn't confirmed Nash's association, but said of "River" in a 2014 NPR interview, "It's taking personal responsibility for the failure of a relationship."

For Rolling Stone in 1979, Mitchell told Cameron Crowe how coming to a personal crossroads had inspired Blue. "By the time of my fourth album [Blue, 1971], I came to another turning point — that terrible opportunity that people are given in their lives. The day that they discover to the tips of their toes that they’re assholes [solemn moment, then a gale of laughter]. And you have to work on from there. And decide what your values are. Which parts of you are no longer really necessary. They belong to childhood's end. Blue really was a turning point in a lot of ways."

Blue is also fueled by Mitchell's search for independence. She literally struck out on her own when she set off for Europe in the late 1960s, leaving Nash behind. This trip to Europe inspired several of Blue's songs, such as "Carey" and "California," which evoke the excitement and fun of traveling the world while still missing what's left behind.

Musically, Blue displays Mitchell's adeptness with the dulcimer, an instrument she began playing in 1969 that she adapted to her own style. Mitchell wrote many of Blue's songs on the instrument. It provides the first sound as Blue begins with "All I Want," and is used on other songs like "Carey" and "A Case of You."

Looking back at Blue, Mitchell has said it furthered her as a solo artist: "The Blue album, for the most part, holds up for me. At that point, I feel that I'm beginning to strip off a lot of influences, country, rock and roll influences, from hanging around with people who were singing in trios, singing so that they could harmonize tightly. I picked up on some of that, which I think interfered with my interpretation as a solo artist. It's like I took liberties with it almost as if I was unaware of it. I think that more and more I will find my way to a more sensitive interpretation of my own material."