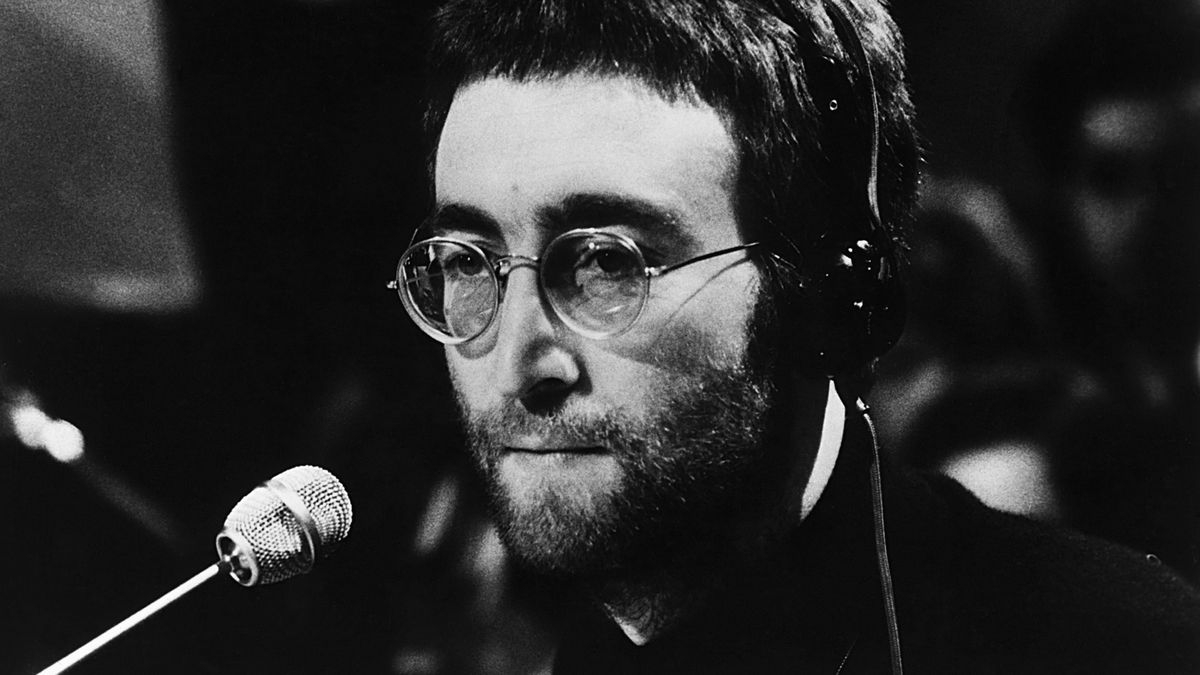 John Lennon left behind an indelible legacy of music that evoked a range of emotions. Songs like "Real Love" (with the Beatles), "Jealous Guy" and "Imagine," to name a few, were a testament to his musical genius.

On December 8, 1980, Lennon was fatally shot in front of his New York City home by crazed fan Mark David Chapman. Only two months earlier, on October 9, 1980, Lennon had celebrated his 40th birthday with his wife, Yoko Ono, and five-year-old son, Sean (who coincidentally shares the same birthday). The occasion was uniquely momentous for Lennon, as Ono had surprised both her husband and son with a sky-written message above their Manhattan apartment building: "Happy Birthday John & Sean - Love Yoko." That November, Lennon and Ono had released the collaborative project Double Fantasy, and only weeks before his tragic death, Lennon had been overjoyed by the news that the record had gone gold.

In an interview with Rolling Stone on December 5 — just three days before he was killed — Lennon had shared some eerily prophetic words of wisdom: "Give peace a chance, not shoot people for peace. All we need is love. I believe it."

Lennon was in good spirits on the morning of December 8, 1980, but sadly, his life would be tragically cut short before the day's end. Below, we present a timeline of the legendary musician's final hours in detail.

Rolling Stone magazine photographer Annie Leibovitz arrives at Lennon's apartment for a photoshoot. Around the same time, Lennon returns home after getting a haircut — reportedly in a 1950s Teddy Boy style — at an Upper West Side barbershop near the Dakota, the building where he and Ono live. During the shoot, Leibovitz wants to take a photograph of Lennon and Ono together, both nude, but digresses after Ono says she's uncomfortable with being completely nude. She takes a single Polaroid of a completely clothed Ono lying on her back and a naked Lennon, who's kissing and embracing his wife in a fetal-like position. Upon looking at the shot, the three know that they've created something profound. Incredibly impressed with the image, the couple tells Leibovitz, "You've captured our relationship exactly."

(The now-iconic photo would go on to be printed on Rolling Stone's cover on January 22, 1981. In 2005, it's named the "top cover of the previous 40 years" by the American Society of Magazine Editors.)

12 p.m. - Lennon's friend makes small talk with Chapman outside of his apartment

Paul Goresh, a friend of Lennon's, makes small talk outside of the Dakota with a stranger he'd encountered there minutes earlier: 25-year-old Chapman. Chapman, who's holding a copy of Double Fantasy, tells Goresh that he's from Hawaii and is awaiting Lennon's exit from the building in hopes that he'll autograph his album. 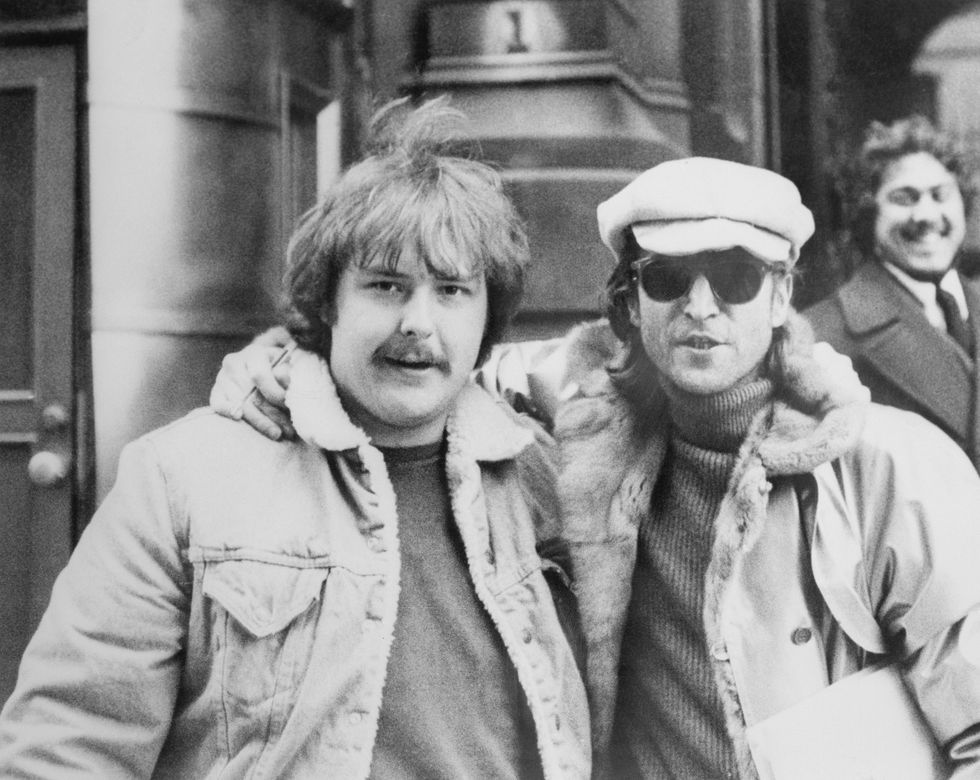 Employees from San Francisco's RKO Radio, including famed radio personality Dave Sholin, arrive at the Dakota for an interview with Lennon to promote Double Fantasy. A smiling Lennon "does a little jump in the air" and in a welcoming fashion announces, "Well, here I am, folks, the show's ready to begin!" He speaks candidly about the lost revolutionary focus of the 1960s and his advocacy for world peace and feminism. "Maybe in the '60s we were naïve and like children and later everyone went back to their rooms and said, 'We didn't get a wonderful world of flowers and peace... The world is a nasty horrible place because it didn't give us everything we cried for,'" he said. "Right? Crying for it wasn't enough." When the interview comes to a close, Lennon remarks, "I consider that my work won't be finished until I'm dead and buried and I hope that's a long, long time."

During the interview, his son Sean, accompanied by nanny Helen Seaman, returns home after spending time on Long Island.

They exit with the RKO Radio crew and are awaiting a ride to take them to the Record Plant studio in Midtown where they plan to work on a new single, "Walking On Thin Ice." During this time Chapman, his Double Fantasy copy still in hand, approaches Lennon and extends the album. When the former Beatle asks the stranger if he wants him to sign it, Chapman nods timidly. Standing nearby and camera in hand, Goresh takes a couple of photos of the two men. RKO's limo arrives shortly thereafter, and Sholin offers to give Lennon and Ono a lift to the studio.

When they arrive they begin working with producer Jack Douglas on their new song, the lyrics of which would later prove strangely prescient: Walking on thin ice/ I'm paying the price/ For throwing the dice in the air/ Why must we learn it the hard way/ And play the game of life with your heart? ... I may cry some day/ But the tears will dry whichever way/ And when our hearts return to ashes/ It'll be just a story/ It'll be just a story. Lennon plays a guitar piece for the track—his last musical recording—before the jovial couple exits the studio.

The husband and wife leave the studio and head home to the Dakota. After exiting their limo, Lennon makes eye contact with the awkward young man he'd met hours earlier: Chapman. With his now-signed album in hand, he's after more than an autograph this time. Seconds later, Chapman pulls out a .38 handgun and fires five shots at the musician, hitting Lennon four times in the back and chest. Lennon somehow manages to continue walking, eventually collapsing in the front vestibule of the Dakota. Strewn around him are a number of cassettes that he'd been holding.

After doctors in Roosevelt's emergency room spend several frantic minutes trying to save Lennon, Ono is approached by the head ER doctor. He informs her that the medical staff was unable to resuscitate her husband. Lennon is officially pronounced dead. Ono is hysterical for several minutes afterward. "She refused to accept or believe that," Lynn recalled in a 2005 interview with the Washington Post. "For five minutes, she kept repeating, 'It's not true. I don't believe you. You're lying.'" After regaining her composure, Ono asks Lynn to wait to publicly announce the news so that she can tell Sean.

ABC's Howard Cosell is first to break the news that Lennon has died, interrupting a Monday Night Football game between the New England Patriots and Miami Dolphins. Cosell also announces that a special edition of Nightline will air 30 minutes after the game, providing additional information on the musician's death. 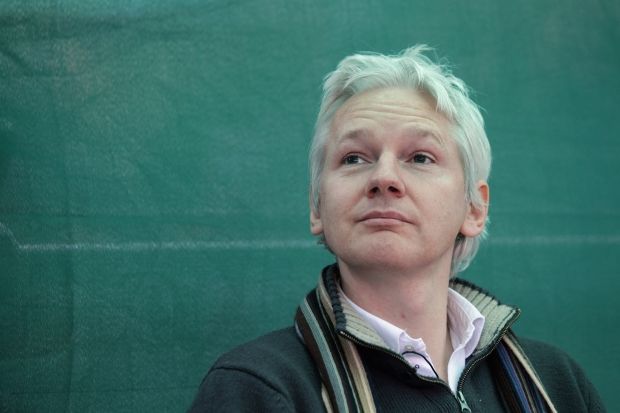 A fan holds a photo of John Lennon as a crowd gathers to mourn his death on December 8, 2000 — 20 years after his murder; Photo: NY Daily News Archive via Getty Images

Following the report — and continuing for several days thereafter — thousands of Lennon fans unite near the Dakota to mourn the late musician. The public response to Lennon's murder is noted as the first of its magnitude since the assassination of President John F. Kennedy. Vigils are held in numerous locations worldwide.

Events are held around the world each December to commemorate the rock icon's death and everlasting impact.