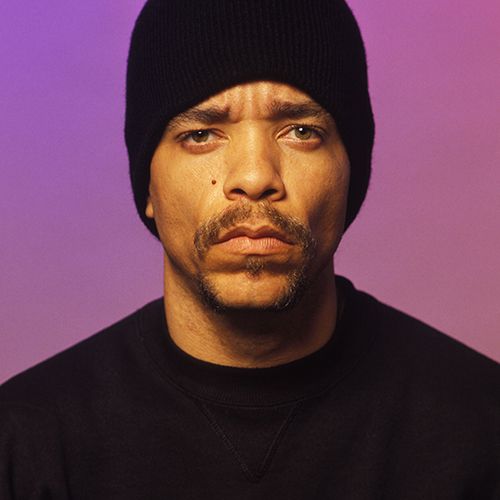 Born in Newark, New Jersey, in 1958, Ice-T lost his parents at a young age. After moving to south central Los Angeles to live with an aunt, he became involved with inner city crime and hustling. His talent for rhyme saved him from a life on the streets, and in 1987 he released his debut album, Rhyme Pays. In the 1990s, Ice-T became famous for his controversial political songs like "Cop Killer." The rapper also has a career as an actor, most notably playing a detective on Law & Order: Special Victims Unit since 2000.

The man who would become famous as Ice-T was born Tracy Marrow in Newark, New Jersey, on February 16, 1958. He grew up in Summit, New Jersey, with his parents. In his book Ice: A Memoir of Gangster Life and Redemption—From South Central to Hollywood, Ice-T says of his dad, "He was a working man, a quiet, blue-collar dude ... Despite the fact that Summit is predominantly white, I can't say there was overt prejudice in the town, at least not within the adult world as I observed it. All my father's friends, all the guys he worked with, were white working-class dudes. Lunch-bucket dudes. Black and White, they were all cool with one another."

When Ice-T was in third grade, his mother suddenly died of a heart attack. He says, "My mother was a very supportive and smart woman, and I know she cared about me, although she wasn't very affectionate toward me. I only have a few specific memories of her, vague and distant, like some grainy home movie, someplace in the back of my mind."

Just four years later, his dad also suffered a fatal heart attack. "I was still so young that the experiences of both of my parents' deaths are kind of blurred together in my mind. And being an only child, I was going through all of it in my own little bubble," says Ice-T.

After the death of his dad, Ice-T moved to South Central Los Angeles to live with his aunt. It was there that the sixth grader became involved in inner-city life that would define his career as a rapper and later give him the credibility to become a spokesman against gang violence. Despite disapproval from his friends, Ice-T managed to graduate from high school with good grades. Turning normal teenage delinquency on its head, he later admitted to "acting like I was ditching class when I was really ditching my friends so I could slip back to school."

Before beginning his rap career in the early 1980s, Ice-T spent four years in the United States Army, after which he returned to Los Angeles and took up a life as a self-styled hustler. Crime paid for a time, allowing Ice-T to take impromptu trips to the Bahamas and collect over 350 pairs of sneakers, but soon his addiction to the high life began to fade. In an interview, Ice-T recalled his breaking point: "I had a friend who I looked up to, 'cause he made more money than me. And he said, 'Yo, Ice, you got a chance. Do that rap thing.' And that word 'chance' messed up my mind. And I just gave up hustling completely."

Because every hip-hop artist needs a nom de guerre, "Ice-T" came into being with help from author Robert Maupin Beck III, whose pen name "Iceberg Slim" became Tracy Marrow's inspiration. After spending a few years honing his craft by creating music for videos and releasing various recordings, Ice-T signed with Sire Records in 1987. Later that year, he released Rhyme Pays, his debut album, which eventually went gold. His recording of the theme song for Dennis Hopper's gang-themed movie Colors (1987) also garnered the new artist plenty of attention. The movie explored life in the Los Angeles projects and marked the beginning of Ice-T's controversial depictions of South Central in his artistic work. When the Black community pushed back against Colors' cultural critique, Ice-T said, "People should give Dennis Hopper credit—he deglamorized the situation. He just showed the street gangsters. He didn't show the kids wearing their diamonds and cruising in their Ferraris."

Ice-T released two more albums in the late 1980s, confirming his status as one of West Coast rap's most promising stars. His album O.G. Original Gangster (1991) was later cited as one of the key factors in developing the genre of gangster rap. Mixing social commentary with inflammatory lyrics, the rapper pushed musical boundaries by recording a heavy metal track with the band Body Count. He would later tour with the band and play at the rock-oriented Lollapalooza festival.

In 1992, Ice-T again collaborated with Body Count on their self-titled debut album, a record that included the most controversial song of Ice-T's career: "Cop Killer." This song quickly drew widespread condemnation for inciting violence against police officers. The artists claimed that the song was simply intended as a commentary on the police brutality and racism felt by the Black community in Los Angeles. Nonetheless, the contentious track led to a firestorm of controversy, prompting Time Warner to block the release of Home Invasion, Ice-T's next solo album. The artist soon broke with Sire/Warner Bros. Records, releasing his work for the remainder of the 1990s through his own Rhyme Syndicate and Priority Records. The next eight years would yield a number of Billboard hits, several groundbreaking singles, and further collaboration with heavy metal bands like Black Sabbath and Slayer.

Parallel to his music career, Ice-T was also building his resume on the big screen, finding roles in movies such as New Jack City (1991), Ricochet (1991), Trespass (1992) and Johnny Mnemonic (1995). Somehow the rapper-turned-actor found time to build a television career as well, including multiple guest-star appearances and even his own reality show on VH1, Ice-T's Rap School.

Ice-T's most notable and long-lasting television role has been as Detective Odafin "Fin" Tutuola on Law & Order: Special Victims Unit. Ice-T has worked on this popular NBC police drama since 2000.

Ice-T's most recent labor of love is The Peacemaker: L.A. Gang Wars, a reality show on A&E that chronicles the life of gang mediator Malik Spellman. Like the show's star, producer Ice-T is now strongly committed to ending violence in the place he grew up, hoping the word "chance" will mean as much to a younger generation as it did to him when it first inspired him to escape the streets via hip-hop. When talking about his own opportunity, Ice-T makes no bones about where he would be without music: "I was so programmed into being a hustler that if I hadn't had a chance to rap, I'd either be dead or in jail—or I'd be rich, but I knew the odds were against it."

Ice-T is a father to daughter LeTesha with ex-girlfriend Adrienne and son Tracy Marrow Jr. with his ex-girlfriend Darlene Ortiz. In 2005, Ice-T married Coco (née Nicole Austin), with whom he starred in the reality show, Ice Loves Coco (2011-2013), on E!

In 2015, a month ahead of their eponymous talk show debut, Ice-T and Coco announced they were expecting their first child. The couple welcomed daughter Chanel Nicole on November 28, 2015.