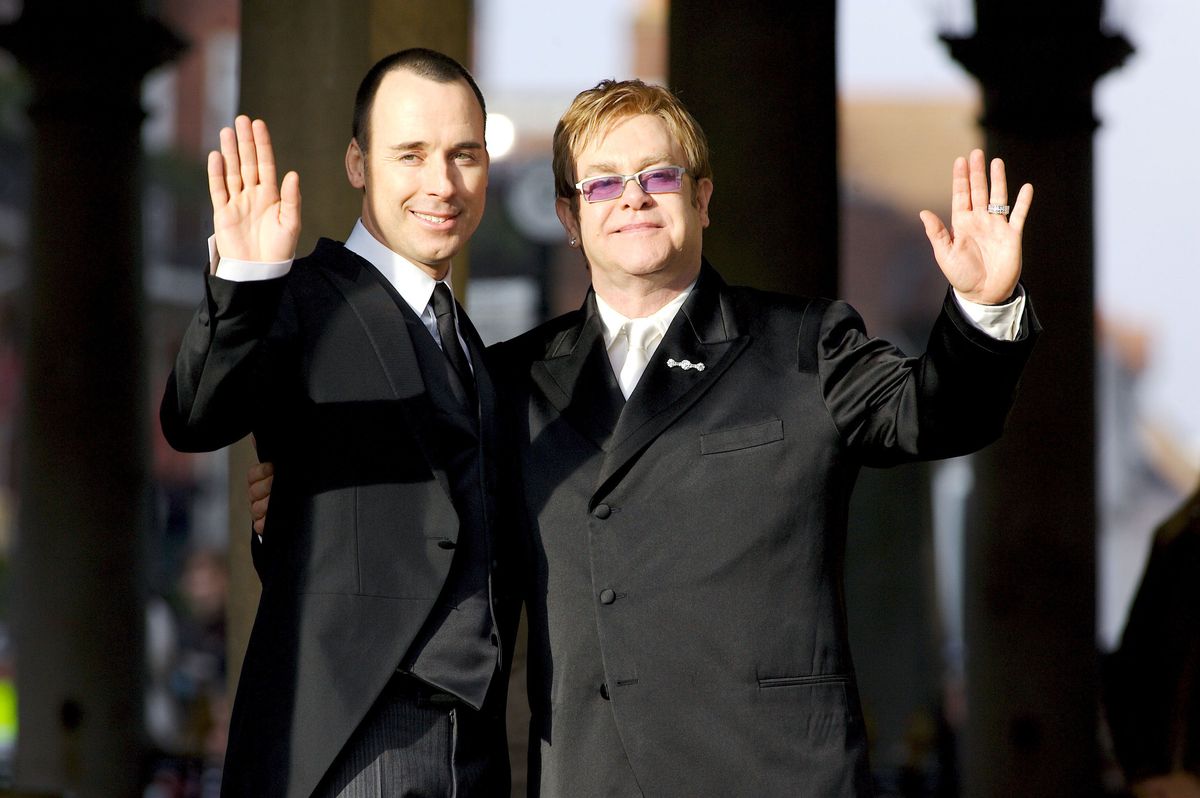 After more than 25 years together, Elton John and husband David Furnish have become the very public face of same-sex coupling. The English rock legend and Canadian filmmaker and former advertising executive are red carpet regulars, attending events and fundraisers, proudly posing for photos hand-in-hand or one with an arm around the other.

John and Furnish were immediately attracted to each other

John met Furnish, 15 years his junior, in October 1993. Sober for three years following more than a decade of substance abuse, the singer was learning to live life without drugs or alcohol, residing mainly at his home in Atlanta. Having returned to his estate in Windsor, England, John decided to expand his social circle.

“I wanted to meet new people so I rang up a friend in London and said, ‘Could you please rattle some new people together for dinner here Saturday?’” John told Parade in 2010. Reluctantly, Furnish, an ad exec based in London, agreed to accompany a friend to the meal but was prepared for a dull evening. It proved to be anything but as the host and guest soon became acquainted.

“I was attracted to David immediately,” John told Parade. “He had a real job, his own apartment, a car. He was independent. I didn’t need to take care of him. I thought, ‘God, this is new territory for me — someone wants to be with me just because he likes me.’ I knew he was the one because he is not afraid of me. He always tells me exactly what he thinks.”

That initial attraction was mutual, with Furnish returning to John’s home the very next evening for a more relaxed one-on-one dinner of Chinese takeout (though in typical John fashion, it was takeout from the trendy London restaurant Mr. Chow’s). “We fell in love very quickly,” John said. 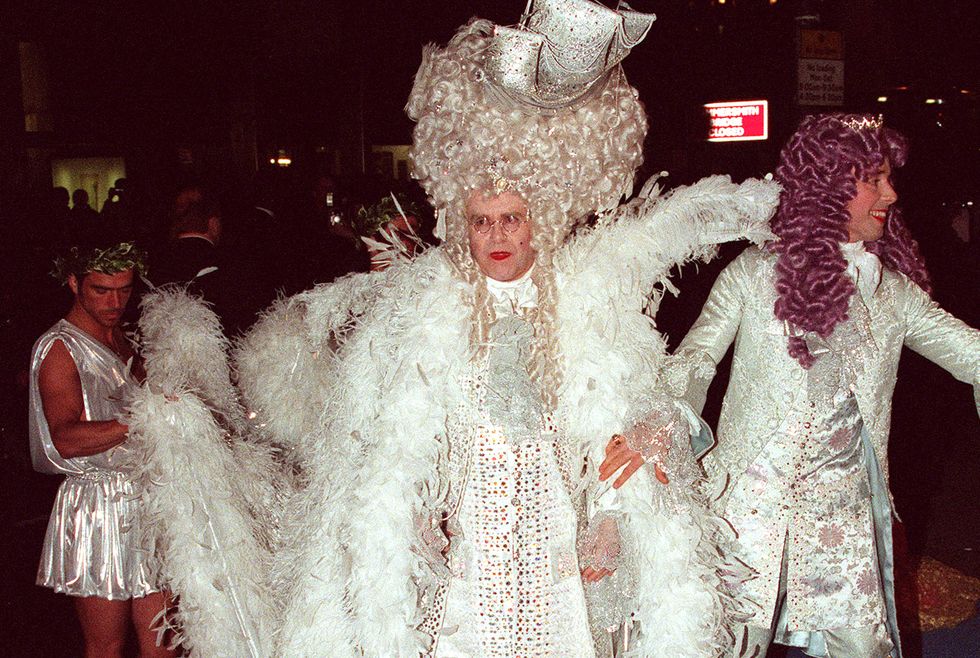 Furnish embraced John's fame instead of being intimidated by it

The couple was soon a fixture at the hottest parties and events around the globe. But unlike John’s past relationships, in which he says his fame often overshadowed the union and subsumed his partner’s identity, Furnish was not intimidated nor driven away by the singer’s showy public persona. In fact, he embraced it, making his directorial debut with Elton John: Tantrums and Tiaras, a warts-and-all 1997 TV documentary about his boyfriend that was nominated for a BAFTA award.

Furnish went on to produce the films Gnomeo & Juliet, Sherlock Gnomes, It’s a Boy Girl Thing, and is a co-producer alongside John on the biopic Rocketman, starring Taron Egerton as John and Jamie Bell as lyricist Bernie Taupin. As well as producing films, Furnish also sits on the board of the Elton John AIDS Foundation, which has raised more than $400 million to support HIV-related programs around the world.

It was during an at-home dinner party with friends and family in May 2005 that John proposed to Furnish, with the couple entering into a civil partnership on December 21 the same year. When same-sex marriage became legal in Britain in 2014, the couple converted their partnership into a marriage on the same date, December 21. John had been married previously to German-born Renate Blauel, following a whirlwind courtship and ceremony in 1984. They divorced four years later.

As a show of support for same-sex marriage in Australia in 2017, John took to Instagram to post an image of himself and Furnish on their wedding day. “When we married in 2014, it felt like that fact was accepted by the world,” he captioned the image. “For David and I, being able to openly love and commit to one another, and for that to be recognized and celebrated is what makes life truly worth living.”

John didn't initially want children but had a change of heart

Their journey to parenthood began in 2009 when visiting an orphanage for HIV-positive children in Ukraine and the couple looked into adopting a 14-month-old boy they had become attached to. Deemed too old and in a marriage not legally recognized in that country they were denied, though John says he and Furnish still provide for the child and his sibling.

“I always said no to having kids, because I’m too old, too set in my ways, too selfish, the lifestyle doesn’t suit me,” John said of the meeting during a 2016 interview with Rolling Stone. “But I said, ‘This boy we met was trying to tell me something.’ He was trying to say, through God or someone else, 'Bull***t, you can be a dad, look at how much pleasure I gave you in an hour and a half.’ And I said, ‘Let’s go for it.’”

The couple welcomed their first child, son Zachary Jackson Levon Furnish-John, via surrogate in 2010. Their second son, Elijah Joseph Daniel Furnish-John, was born in 2013 with the same surrogate. In addition to their own sons, both Furnish and John are godfathers to David and Victoria Beckham’s son Brooklyn. Lady Gaga is godmother to both Zachary and Elijah. “She’s a great role model,” John has said of the choice, revealing the boys call her “Gaga mother.” 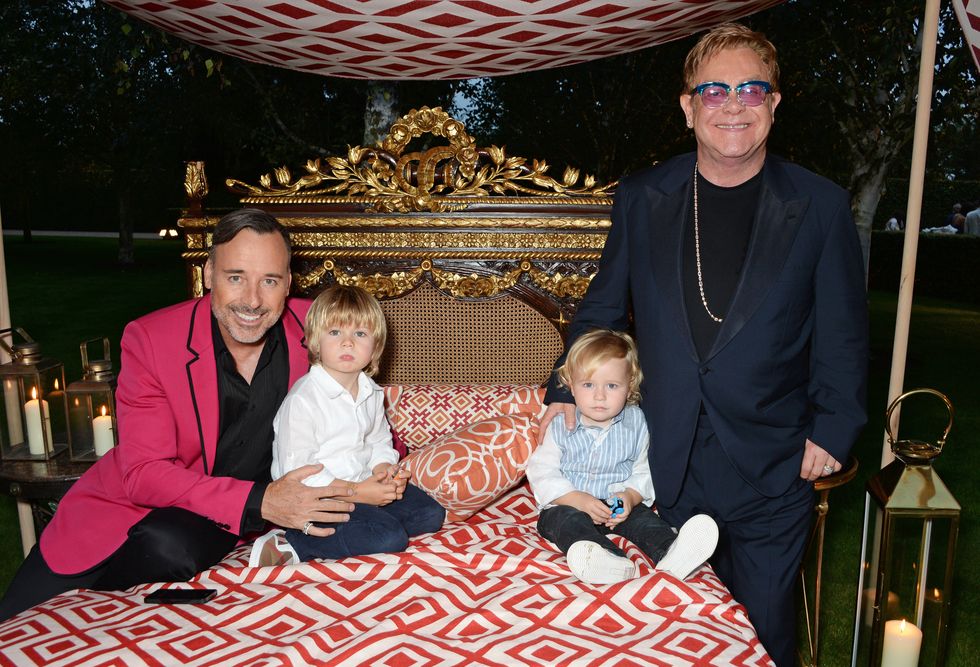 John credits Furnish with not only saving his emotional life, but his financial life also, and jokingly refers to his spouse as Yoko Ono, comparing Ono and The Beatles with Furnish stepping in as pseudo-manager for John’s business affairs. “David came into my life, and in the last two years has been very involved in sorting the dross that we had surrounding me,” John told Rolling Stone in 2016. “We had so many people who were earning vast amounts of money that weren’t pulling their weight. … David doesn’t mind being Yoko Ono, but he’s doing it on my behalf.”

The couple writes love notes to each other every Saturday

John says his Goodbye Yellow Brick Road tour, which kicked off in September 2018 in America and will encompass 300 shows across five continents before concluding in 2021, will be his last. His reason for ceasing touring? His sons and his husband. “Having had children and seeing how much joy they brought to us, I thought, ‘Do you know what? I want to spend more time with them. I have to spend more time with them. I’m their father, David is their father. They give us so much joy. I don’t want to miss too much,’” John said of his decision.

Perhaps one of the most revealing things about the lasting relationship between John and Furnish is their ritual of sending each other a card or note every single week. In a video from R&B artist 6LACK’s confessional series about love, the couple says communication is key to making a marriage work, especially if written by hand. “Every Saturday we gave each other an anniversary card, because we met on a Saturday,” Furnish says. “So, we wrote down, in like a little card that you put next to the bed, ‘Happy Anniversary.’ And you write about the week that’s passed and the week that’s coming, and you connect and you tell each other you love each other.”

Regardless of where either person is in the world, the weekly ritual continues. “Every Saturday, without fail, we’ve sent each other a card or a fax,” John assures in the video. “We go through difficulties as much as anybody else does in a relationship, but we sort through it by communication. And one way of communicating is writing down on a piece of paper or a card how you’re feeling.” 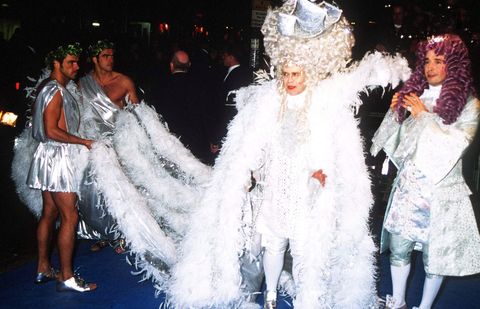