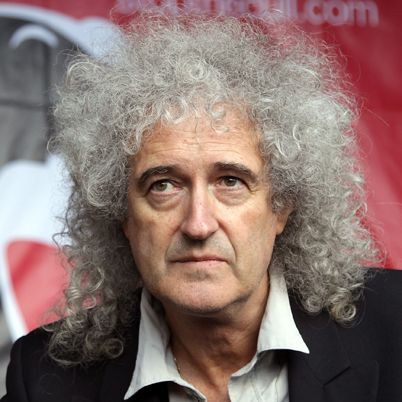 Who Is Brian May?

Brian May played lead guitar on his homemade axe, the "Red Special," for the rock band Queen, which rose to fame in the 1970s. Following the death of frontman Freddie Mercury in 1991, Queen rediscovered success in later years with vocalists Paul Rodgers and Adam Lambert. May also helped with the development of We Will Rock You, a long-running musical based on Queen songs, and the 2018 Mercury biopic Bohemian Rhapsody. Outside his musical career, May has earned advanced degrees in astrophysics, published numerous books and devoted his time to animal welfare causes.

Brian Harold May was born on July 19, 1947, in Hampton, Middlesex, England, to parents Ruth and Harold May. An imaginative teen, May, with the help of his father, built his own homemade guitar, dubbed "The Red Special." The guitar, which was made from makeshift materials including firewood and was played with a six-pence coin for a pick, would later figure prominently in May's musical career. He would go on to play it on every Queen album and live show.

The young May received his education at the Hampton Grammar School (now the Hampton School). An exceptional student, after graduation in 1965, he enrolled in the astrophysics program at London Imperial College, where he obtained his bachelor's degree in science. He would finish most of his Ph.D. by 1974 and finally complete it in 2007.

While at London Imperial College, May formed a rock band called Smile, his passion for music soon trumping his interest in astrophysics. In 1971, May put off completing his Ph.D. to hit the road with his band, renaming the group Queen—a name that was to become legendary in the world of rock 'n' roll. May performed as a lead guitarist, vocalist and occasional songwriter. The band's lead vocalist, Freddie Mercury, also played the piano. John Deacon was on bass guitar, while Roger Taylor covered drums and vocals.

In 1973, after signing with EMI Records, Queen released their self-titled debut album, which went gold. With its fresh and unique sound, the group won over fans in both the United Kingdom and the United States.

The year 1974 brought the release of two more successful Queen albums: Queen II and Sheer Heart Attack. The latter was a best seller, featuring the Top 10 single, "Killer Queen." The following year brought more success for May and the band: Queen had their first No. 1 record in America with A Night at the Opera, featuring two of May's ballads: "39" and "The Prophet's Song." The album also gave birth to one of Queen's best-known hits—the rock-opera song "Bohemian Rhapsody," with May cranking out a trebly solo on his "Red Special." Also that year, Queen began headlining concerts on their world tour.

'News of the World'

While recording Queen's albums, May applied his knowledge of physics in the recording studio: Using what he knew about sound waves, he created echoes that amplified the stomping and clapping section of the song, creating the illusion that the sounds were coming from a huge crowd of people. With "We Will Rock You," on the band's 1977 album News of the World, May strove to create an anthem that inspired audience participation and unity. The song achieved its desired effect at concerts, as crowd members stomped, chanted and clapped along in synchronicity.

'The Game' and Later Albums

The hit single "Crazy Little Thing Called Love," released in 1979, appeared on Queen's 1980 album The Game. They followed with the Flash Gordon soundtrack album later that year, and then Hot Space (1982), The Works (1984) and A Kind of Magic (1986). Although the band was beginning to decline in popularity by that point, they were able to achieve platinum status with The Miracle (1989) and Innuendo (1991).

Tragedy struck May and the rest of Queen in 1991, when Mercury died of AIDS. In the wake of his passing, the band established the Mercury Phoenix Trust, an AIDS-relief charity. May, Deacon and Taylor released Made in Heaven in 1995. It was the band’s final studio album with their former lead singer until the 2014 release of Queen Forever, which featured some previously unreleased tracks sung by Mercury; among them was a lost duet with the late Michael Jackson, entitled, "There Must Be More to Life Than This."

In 2005, May and Taylor reunited for a tour, with Paul Rodgers on vocals. They released a studio album, Cosmo Rocks, in 2008. In 2012, May and Taylor returned to the stage once again, this time with American Idol rocker Adam Lambert on vocals. The revamped Queen went on a major world tour with Lambert from June 2014 through September 2015, and continued to perform together in the following years.

In the early 2000s, May and Taylor signed on as music supervisors for a Queen jukebox musical, We Will Rock You. Directed and written by Ben Elton, We Will Rock You premiered in London in May 2002 and became one of the longest-running productions in West End history.

May also was involved in the long-gestating development of a Freddie Mercury biopic. Following numerous personnel changes, Bohemian Rhapsody premiered in fall 2018 to positive reviews, with Rami Malek earning an Academy Award for his performance as the iconic Queen frontman.

Additionally, May has composed and performed for the theater, namely the London Riverside Studios productions of Macbeth (1987 and 1990), and has collaborated on tunes for movie soundtracks such as Mission: Impossible 2 (2000) and Spider-Man 2 (2004).

Continuing with his life-long interest in astrophysics, May collaborated with other astrophysicists to analyze data from the Pluto New Horizons probe at NASA in 2015. He is an avid collector of stereoscopic photography, a type of 3D imaging, and owns the London Stereoscopic Company. “My geekiness is bottomless when it comes to stereo,” he told The Telegraph in 2014.

May has authored and co-authored a number of books over his career, including: MgI Emission in the Night Sky Spectrum (1972), Brian May: Back to the Light (1993), Bang! The Complete History of the Universe (2007), A Survey of Radial Velocities in the Zodiacal Dust Cloud (2008), A Village Lost and Found: "Scenes in Our Village" by T. R. Williams. An Annotated Tour of the 1850s Series of Stereo Photograph (2009), Diableries: Stereoscopic Adventures in Hell (2013), Brian May's Red Special (2013), How to Read the Solar System: A Guide to the Stars and Planets (2015) and Crinoline: Fashion's Most Magnificent Disaster (2016).

The rocker/scientist/author also is a devoted animal welfare activist. He established The Save Me Trust in 2009 to protect wildlife. In a 2012 interview with The Guardian, he commented about his wish for his legacy, “I won’t be remembered in 1,000 years anyway, but I would like to leave this planet knowing that I did what I could to make it a better place, a more decent place, a more compassionate place." That same year, May was appointed vice president of Britain's RSPCA.

May has one son, Jimmy, and two daughters, Louisa and Emily, with wife Chrissie Mullen, whom he married in 1974. After they parted ways, he married Anita Dobson in 2000.

The guitarist suffered what he described as a near-fatal heart attack after a gardening accident in May 2020, before recovering and deeming himself "ready to rock."