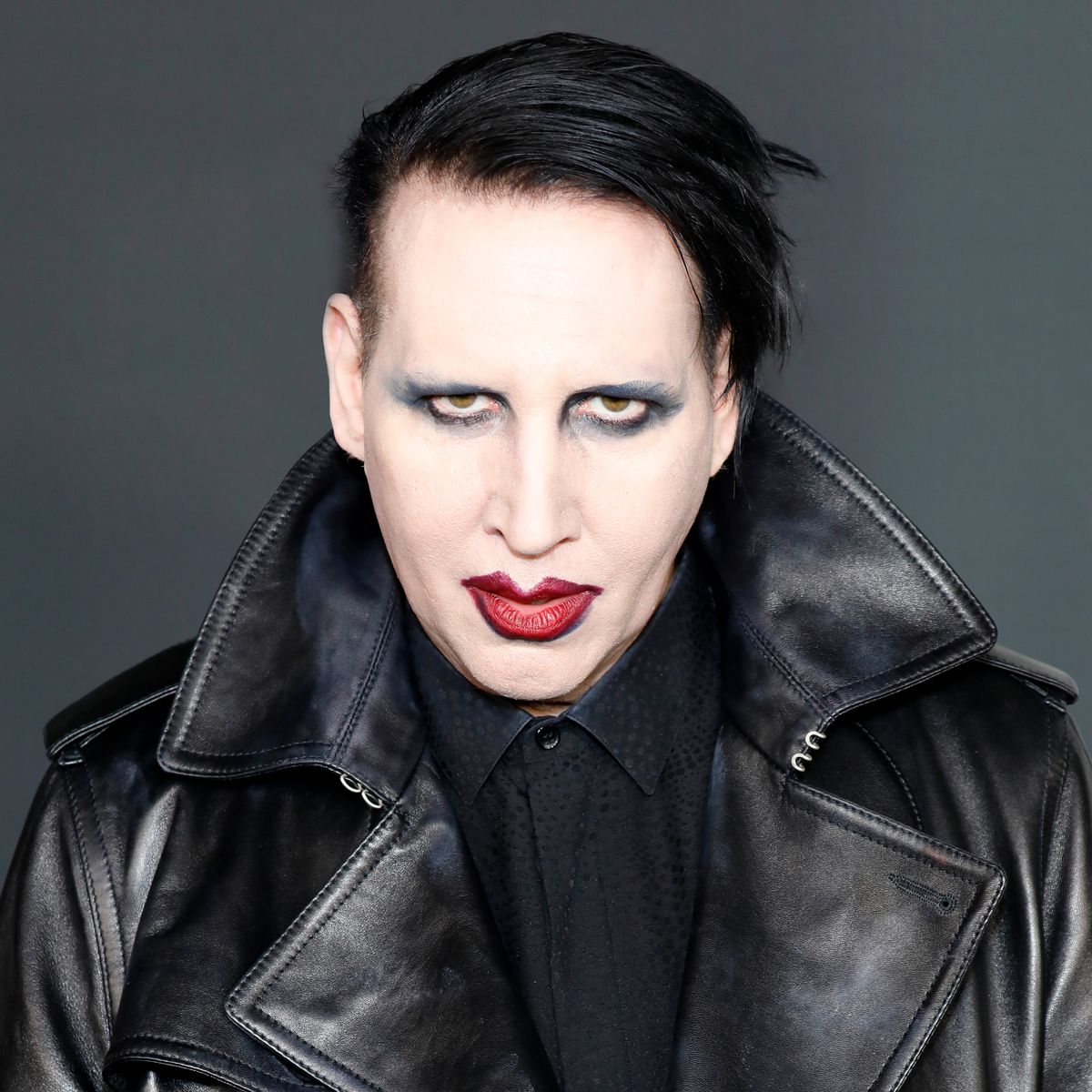 Who Is Marilyn Manson?

Born Brian Hugh Warner, Marilyn Manson combined the names of Marilyn Monroe and Charles Manson for his stage name. Discovered by Nine Inch Nails frontman Trent Reznor, Manson and his eponymous band created such goth albums as Antichrist Superstar and Smells Like Children, to the joy of troubled teens and the chagrin of their parents.

Manson was born on January 5, 1969, in Canton, Ohio, to Hugh and Barb Warner. Warner endured a tough childhood, as he was molested several times by a neighbor. The trauma put the young boy on a path of rebellion as he tried to reconcile the incidents with his daily life.

After high school, Manson and his family moved to Fort Lauderdale, Florida, for his father's job. There, the young Manson enrolled at a local community college called Broward, where he studied journalism and theater. Warner's first foray into the music business came as an entertainment journalist for a local magazine in Fort Lauderdale. This gave him the opportunity to interview several famous musicians, including Reznor of Nine Inch Nails.

During this time as a journalist, Warner formed a band called Marilyn Manson and the Spooky Kids. Manson has stated that he got the name for his alter ego by combining Marilyn Monroe's first name with Charles Manson's last. Later, the band would change the name simply to Marilyn Manson.

In 1993, Marilyn Manson and his band earned a contract from Trent Reznor's record label, Nothing, based on their performances and self-released cassettes in the Fort Lauderdale area. The record contract also earned them a spot on Nine Inch Nails' 1994 tour. Marilyn Manson's first album was titled Portrait of an American Family. Produced by Reznor, it gave Manson his first taste of commercial success, as he gained a cult following after its release.

In 1996, Marilyn Manson hit it big with the release of the group's second album, Antichrist Superstar. The album, co-produced by Reznor, debuted at No. 3 on the Billboard 200 chart. The following year he released a second EP, Remix & Repent.

Marilyn Manson achieved his greatest success in 1998 with the release of Mechanical Animals. The album reached No. 1 on the Billboard charts and helped propel ticket sales for his Last Tour on Earth, which kicked off a year later. For the album and tour, Manson adopted an alter-ego glam rocker persona, an androgynous space alien named Omega.

Marilyn Manson released Holy Wood (In the Shadow of the Valley of Death) in 2000 and went on tour in support of the album the following year. During a performance in Michigan, he was charged with sexual misconduct by a security guard for allegedly performing an offensive act. Later on the tour, he was hit with a civil suit alleging that Manson rubbed his pelvis on a security guard's head. The misconduct charge was later lowered to a misdemeanor, and the civil suit was dropped.

In 2003, Marilyn Manson and his band released their fifth studio album with The Golden Age of Grotesque. It spent a week atop the charts and was critically acclaimed as one of the best albums of the year.

Manson announced the release of his subsequent album, Eat Me, Drink Me, in 2005, but it was not released until mid-2007. As with his earlier studio efforts, Manson was heavily involved with the writing, coordinating and producing of the record. Manson and his former bandmate, Twiggy Ramirez, reunited and delivered the band's seventh album, The High End of Low, in 2009.

After teasing the release of new music in late 2016, Marilyn Manson debuted two singles, "We Know Where You F*****g Live" and "Kill4Me," in September 2017. The tracks were part of the band's 10th album, Heaven Upside Down, which was praised by critics for building on the promise of the previous studio effort.

While co-headlining the Hell Never Dies Tour with Rob Zombie in summer 2019, Manson said he hoped to put out a new album by the end of the year.

In 1998, Marilyn Manson co-wrote his autobiography with noted rock journalist Neil Strauss, titled The Long Road Out of Hell.

That same year, he made his film debut in David Lynch's Lost Highway. Manson went on to appear in films like Jawbreaker (1999), Party Monster (2003) and The Heart Is Deceitful Above All Things (2004). He later collaborated with Shia LaBeouf for the surrealist-horror short Born Villain (2011).

Manson also surfaced on the small screen in such popular TV shows as Californication, Eastbound & Down and Sons of Anarchy, before landing a recurring role in season 3 of Salem.

Throughout Manson's career, he has been accused and vilified for being a Satan worshipper, and for following the Church of Satan, of which he claimed to be a "reverend." His shows have been protested, boycotted and subsequently canceled because of his perceived "dark" views and stage antics.

Manson was once engaged to actress Rose McGowan. He married burlesque dancer Dita Von Teese in late 2005, but they divorced in 2007 amid rumors of the rocker's affair with actress Evan Rachel Wood. Manson later was briefly engaged to Wood.

On February 1, 2021, Wood posted a statement on her Instagram accusing Manson of abuse. "The name of my abuser is Brian Warner, also known to the world as Marilyn Manson," she wrote. "He started grooming me when I was a teenager and horrifically abused me for years. I was brainwashed and manipulated into submission. I am done living in fear of retaliation, slander or blackmail." Four other women also spoke up about alleged abuse.

The following day, Manson responded to the claims on his Instagram. "Obviously, my art and my life have long been magnets for controversy, but these recent claims about me are horrible distortions of reality," he wrote. "My intimate relationships have always been entirely consensual with like-minded partners. Regardless of how — and why — others are now choosing to misrepresent the past, that is the truth."

Since, several other women have accused Manson of similar allegations, including an ex-girlfriend, who accused the singer of rape and assault.