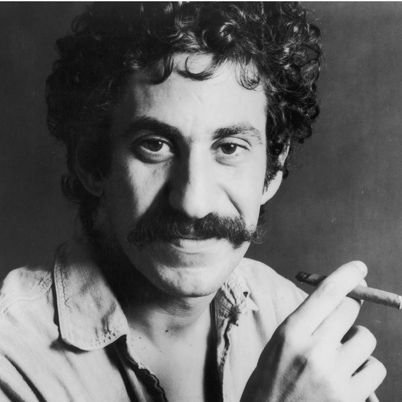 Who Was Jim Croce?

Jim Croce started playing the accordion at age 5, and by his 20s, was touring in multiple folk bands. He released five studio albums and 11 singles. "Bad, Bad Leroy Brown" and "Time in a Bottle" were both No. 1 hits on the American charts. He died in a tragic plane crash in Natchitoches, Louisiana on September 20, 1973, at the age of 30.

American folk singer, songwriter and performer Jim Croce was born James Joseph Croce on January 10, 1943, in South Philadelphia, Pennsylvania, to Italian Americans Jim and Flora Croce. Raised listening to ragtime and country music, Croce picked up music at a young age. He learned to play his first song on the accordion, "Lady of Spain," when he was 5. He eventually taught himself to play guitar.

Croce attended Upper Darby High School in Drexel Hill, and graduated in 1960. He enrolled at Villanova University in Pennsylvania in 1961. It was not until his freshman year of college that Croce began taking music more seriously. He played in several bands, performing at fraternity parties and at other universities around Philadelphia. During this time, one of Croce's bands was chosen for a foreign exchange tour of Africa and the Middle East. He later described the experience fondly, saying, "We just ate what the people ate, lived in the woods, and played our songs. Of course they didn't speak English over there, but if you mean what you're singing, people understand."

After graduation in 1965, Croce worked on construction crews and taught guitar at a summer camp. He joined the U.S. Army National Guard for a short stint ostensibly to avoid the draft and also worked as a teacher at a junior high school in South Philadelphia.

Croce met his future wife, Ingrid Jacobson, at a folk music party. They wed in 1966, the same year that Croce released a self-issued solo album, Facets. From the mid-1960s to early 1970s, Croce and Jacobson performed as a duo. At first, they sang covers by musicians like Joan Baez and Woody Guthrie, but were soon writing their own music. Croce landed a regular gig at a steak house in Lima, Pennsylvania.

In 1968, record producer Tommy West, who had attended Villanova with Croce, encouraged Croce and Jacobson to try their luck in New York City. West introduced the couple to Terry Cashman, who helped produce their first album, Croce. Over the next two years, they drove more than 300,000 miles, playing college and coffeehouse circuits and collecting guitars.

Croce and his wife became disillusioned with both the music business and New York City, so they sold their guitars and moved to the Pennsylvania countryside of Lyndell, where they had their son, Adrian James, in 1971. Jacobson learned to bake bread and can fruits and vegetables. Croce got a job driving trucks and working construction, and continued to write songs, often about the people he would meet at bars and truck stops while working.

In 1970, one of Croce's former college friends, Joe Salviuolo, also known as Sal Joseph, introduced Croce to Maury Muehleisen, a classically trained pianist, guitarist and singer-songwriter from Trenton, New Jersey. Sal encouraged the duo to get together and record new songs, and to send them to ABC Records. At first, Croce backed Muehleisen on guitar, but their roles later reversed, with Muehleisen playing lead guitar to Croce's music. Following Sal's advice, Croce and Muehleisen recorded their songs and sent them to ABC, and soon met with producer Cashman in New York City. In 1972, ABC Records signed with Croce and released his first solo album, You Don't Mess Around With Jim. The record was an instant success, and became a Top 20 album in the United States. The title track reached the Top 10 on the pop charts while "Operator (That's Not the Way It Feels)" reached the Top 20.

From 1972 to 1973, Croce performed in more than 250 concerts, and made appearances on television programs. In early 1973, ABC released his second album, Life and Times, featuring "Bad, Bad Leroy Brown." The single hit No. 1 on the American charts in July 1973, and then went gold. That same year, Croce and his wife relocated to San Diego, California.

On September 20, 1973, Croce, Muehleisen and four others were killed in a plane crash in Natchitoches, Louisiana. Croce had just finished a concert at Northwestern State University's Prather Coliseum. He was then taking a chartered Beechcraft E18S flight to Sherman, Texas, to play a concert at Austin College. Upon takeoff, the plane did not gain enough altitude and crashed into a pecan tree at the end of the runway. According to the official report, the 57-year-old charter pilot had suffered a heart attack.

The news of Croce's passing sparked renewed interest in his former albums. Three months after his death, "Time in a Bottle" from his earlier 1972 release You Don't Mess Around With Jim landed at No. 1 on the singles chart. (The song had also been featured in She Lives!, a made-for-TV movie that aired on ABC in September 1973.)

In 1990, Croce was inducted into the Songwriters Hall of Fame. His songs have also continued to be used for the big screen, as seen with films like Invincible (2006), set in Croce's hometown of Philadelphia, and Django Unchained (2012).

Adrian Croce, who was born on September 28, 1971, became an accomplished singer-songwriter, musician and pianist. He performs under the name A.J. Croce and operates a private record label, Seedling Records. For a number of years, Ingrid Jacobson Croce owned a restaurant called Croce's Restaurant & Jazz Bar, originally located in the Gaslamp Quarter in downtown San Diego, the venue later relocated to Banker's Hill, also in San Diego, but has since shut its doors in 2016.

Croce wrote both upbeat and empathetic, melancholy songs with a visually-rich lyrical style. He was known as a friendly and sincere performer, endearing him to a wide range of fans.