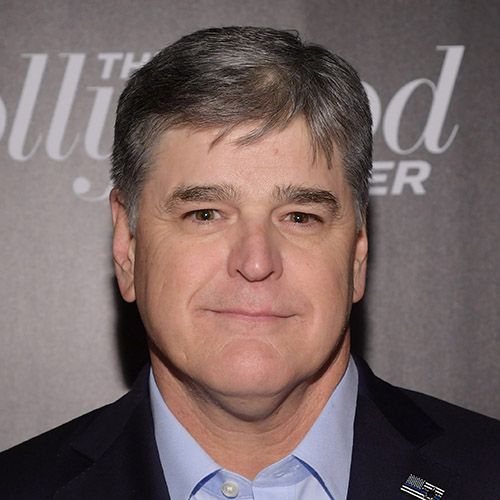 Who Is Sean Hannity?

Sean Hannity began his radio career at a college station in California, before moving on to markets in the Southeast and New York. Today, he’s one of the most listened to on-air voices. In 1996 he was hired as one of the original hosts on Fox News Channel, a conservative media outlet founded by Rupert Murdoch and Roger Ailes. As host of several popular Fox programs, Hannity has become the highest-paid news anchor on television. Hannity’s career, however, has been controversial. His critics accuse him of using his platform to support unproven theories, and his close relationship with President Donald Trump and other political officials has received much scrutiny, with some seeing it as a conflict of interest.

Sean Patrick Hannity was born December 30, 1961, in New York City. The youngest child and only son of first-generation Irish immigrants Hugh and Lillian, Hannity grew up in Franklin Square, a Long Island suburb of New York. Both of Hannity’s parents worked in the justice system: Lillian as a corrections officer and court stenographer and Hugh as an officer in New York City’s family court system.

Hannity attended local Catholic schools, followed by stints at Long Island’s Adelphi University, New York University and the University of California-Santa Barbara. He did not graduate from college, choosing instead to focus on a career in radio, a fascination since childhood.

It was while in Santa Barbara that Hannity received his first break. In 1989 he got a position as an unpaid volunteer host on KCSB, the local college radio station. Hannity quickly tried to establish his conservative credentials, which led to a series of controversial events. After an episode in which he voiced anti-LGBT sentiments (including blaming the gay community for the AIDS crisis), and later attacked a gay fellow KCSB host, Hannity was taken off the air.

With the support of the local ACLU chapter, Hannity received permission to return to his show. Instead, he leveraged the publicity surrounding the KCSB controversy into his first paid radio position, at WVNN in Athens, Alabama, in 1990. Within a few years, Hannity’s afternoon program topped the local market, and he made a name for himself in conservative circles, including forging an early relationship with Georgia Congressman Newt Gingrich. It was in Alabama that Hannity also met his future wife Jill Rhodes.

From 1992 to 1996, his show aired on Atlanta’s WGST. In January 1997, a few months after the premiere of his Fox television program, Hannity landed at New York’s WABC, where his show aired in the late-night hours before moving to the plum afternoon “drive time” slot. Hannity changed radio homes again in early 2014, moving to New York’s WOR.

In 1996 Hannity was hired as one of the original primetime hosts on the new Fox News Channel, a conservative cable television channel created by newspaper publisher and media magnate Rupert Murdoch and Roger Ailes, a television executive who’d spent decades as a Republican media adviser.

Hannity was paired with a more liberal co-host, Alan Colmes, and the duo’s 9 p.m. Hannity & Colmes program aired for 13 years, until Colmes left the program in January 2009. It was a ratings success, spending more than 60 consecutive months as the top program in its time slot, and averaging 3.3 million nightly viewers in the months before Colmes’ departure.

The newly rebranded Hannity program aired in the 9 p.m. slot until 2013, when it was moved to 10 p.m. to make way for a new program hosted by Megyn Kelly, a decision some media watchers saw as an attempt to attract a young demographic and shift away from some of Hannity’s more partisan views. Hannity moved back to 9 p.m. following Kelly’s departure from Fox News Channel in 2017. He continued to be a ratings draw and averaged 3.2 million nightly viewers in the first quarter of 2018.

Hannity became an early and vocal supporter of fellow New Yorker Trump’s 2016 bid for the White House. Trump himself made several appearances on Hannity’s program, especially after an infamous clash with Kelly during a Republican primary debate. Hannity played a similar role in 2009 when he was one of the first cable news hosts to provide a platform to the nascent Tea Party movement.

Trump officials also became frequent guests, and Hannity was credited with shoring up Trump’s support among the Republican base after a series of upheavals during the campaign, including Trump’s ongoing personal attacks on his critics, accusations of sexual harassment by several women and the release of a 2005 tape in which Trump was heard to use disparaging and sexist language about women.

Hannity continued to be a valued adviser to Trump following his election. President Trump appeared on Hannity’s show shortly after he was inaugurated, and the two men reportedly spoke several times a week.

In April 2018, Hannity found himself enmeshed in the ongoing examination into Russia’s interference in the 2016 presidential election. A strong critic of the investigation led by independent counsel Robert Mueller, Hannity spoke out against a raid by federal investigators on the offices of Michael Cohen, a longtime Trump lawyer. Days later, Hannity himself made headlines when he was named in court as a legal client of Cohen’s. Hannity denied that the two had a formal legal relationship, but many criticized Hannity for his lack of transparency.

Despite his ratings successes, Hannity’s career has been controversial, and he has been criticized for his views on immigration, climate change and Islam.

He supported Donald Trump and others who questioned whether Barack Obama was born in the United States, and Hannity frequently called on the president to release his birth certificate. Hannity’s vocal opposition to Obama’s Affordable Care Act saw him support the fictitious concept of “death panels” that would decide the fate of elderly or ill patients.

An early critic of both Bill and Hillary Clinton, he gave frequent time on both his radio and television programs to the investigation surrounding Hillary’s role in the deadly attack on the U.S. consulate in Benghazi, Libya, and welcomed guests who spoke of unsubstantiated theories surrounding Hillary’s mental and physical health.

In 2017 Hannity faced two significant controversies. The first came after he promoted a conspiracy theory surrounding the death of Democratic National Committee staffer Seth Rich. Hannity and others claimed that Rich was murdered because of his connection with documents released by WikiLeaks during the 2016 campaign. Washington, D.C. police said Rich was killed during a botched robbery. Several advertisers pulled out of Hannity’s programs, and in 2018 Rich’s parents sued Fox News for pushing the conspiracy surrounding their son’s death.

In late 2017, accusers (including several who were underage at the time of the events) came forward charging then-Alabama senatorial candidate Roy Moore with sexual harassment and assault. Hannity initially supported Moore, inviting him and other defenders on his programs, leading to another wave of advertisers leaving his programs, followed by counter-protests by Hannity viewers who launched a wave of boycotts against the advertising companies and their products.

Also in 2017, Hannity was inducted into the National Radio Hall of Fame.

In addition to his role on radio and television, Hannity is the author of Let Freedom Ring: Winning the War of Liberty over Liberalism (2002), Deliver Us from Evil: Defeating Terrorism, Despotism, and Liberalism (2004), Conservative Victory: Defeating Obama's Radical Agenda (2010) and Live Free Or Die: America (and the World) on the Brink (2020)

Hannity married Jill Rhodes since 1993, and the couple has two children. Hannity and Rhodes divorced in 2019.