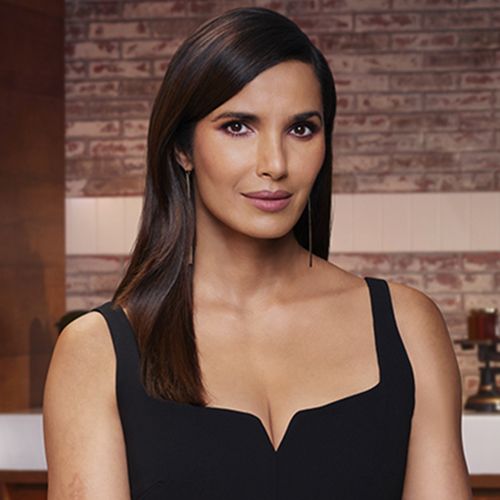 Who Is Padma Lakshmi?

Padma Lakshmi was is a model, actress and television host. Her parents divorced when she was just two years old and Lakshmi was raised in the United States with her mother. After a modeling agent discovered her in Spain, Lakshmi modeled for famous designers and appeared in a few movies. Known for her love of food, she has published several cookbooks and hosted the reality show Top Chef.

Padma Parvati Lakshmi was born on September 1, 1970, in Chennai, India. Lakshmi's parents divorced when she was 2 years old. Her mother moved to the United States to escape the stigma of divorce in India. Lakshmi lived with her maternal grandparents in Chennai for two years before joining her mother in the United States. Both of her parents later remarried, and she has a younger half-brother and half-sister on her father's side. Lakshmi, who shares her last name with the Hindu goddess of wealth and prosperity, grew up first in New York and then in Los Angeles with her mother and stepfather. She returned to India for several months each year to visit family.

When she was 14 years old, a car crash changed her life. Lakshmi had recently recovered from an illness, and "my mother, who is very religious, took me to temple so we could thank God for making me better," she later recalled. The family was returning from the temple when the car skidded off the road and smashed into a tree. The crash broke Lakshmi's pelvis and shattered her upper right arm. Her injuries required surgery that left a seven-inch scar along her arm. Self-conscious at first, Lakshmi came to embrace her scar after she began modeling, when the mark distinguished her. "The scar became my brand statement," she said.

Lakshmi attended Clark University in Massachusetts, starting as a psychology major before graduating in 1992 with a bachelor's degree in theater. While studying abroad in Spain, Lakshmi was spotted by a modeling scout in a Madrid bar. She soon began traveling the world as a model for designers like Armani, Versace and Ralph Lauren. "I was the first Indian model to have a career in Paris, Milan and New York," she said. Her studies and background prepared her well for an international career—in addition to English, Lakshmi speaks Spanish, Italian, Hindi and Tamil.

Modeling led to offers of acting jobs, and Lakshmi began appearing in television shows filmed in Hollywood, Bollywood and Europe. Her roles included a bit part in the 2001 film Glitter, starring singer Mariah Carey, and a part in the Italian miniseries, Caraibi, that required her to gain more than 30 pounds. After losing the weight, she published a cookbook entitled Easy Exotic, a collection of low-calorie recipes incorporating the flavors of Southeast Asia. The book's success led to her own show on the Food Network, Padma's Passport, and a similar job hosting the British show Planet Food.

In 2007, Lakshmi published a new cookbook, Tangy Tart Hot and Sweet, and began hosting the popular American reality show Top Chef, where contestants battle it out in the kitchen. She also reconnected with her father, a former Pfizer executive from whom she had been estranged for decades.

Lakshmi has her own line of Indian-inspired jewelry, as well as a line of spices, teas and bakeware. She also has a new project to keep her busy: daughter Krishna, born in February 2010. Though she originally kept the identity of the baby's father a secret, Lakshmi later revealed him to be American venture capitalist Adam Dell. "Everything is better with her around," she said of her daughter. "Anything from the beginning of the day till the end. I don't really have any attention span for anything else than her."

In 1999, Lakshmi met author Salman Rushdie at a party in New York hosted by journalist Tina Brown. The two married five years later. The couple raised eyebrows, both for the discrepancy in their looks (Rushdie is better known for his books such as The Satanic Verses and Midnight's Children than for his attractiveness) and their ages (Lakshmi was nearly 20 years her husband's junior). Rushdie based a character in his 2001 novel Fury on Lakshmi, to whom the book is dedicated. Lakshmi countered critics who questioned their relationship. "I was a published author and an actress before I met my husband," she said. "I can't help who I fell in love with." The two stayed together for eight years before divorcing in 2007.

Lakshmi is dating American venture capitalist Adam Dell and the pair share a daughter, Krishna. Though she originally kept the identity of the baby's father a secret, Lakshmi later revealed him to be Dell. "Everything is better with her around," she said of her daughter. "Anything from the beginning of the day till the end. I don't really have any attention span for anything else than her."