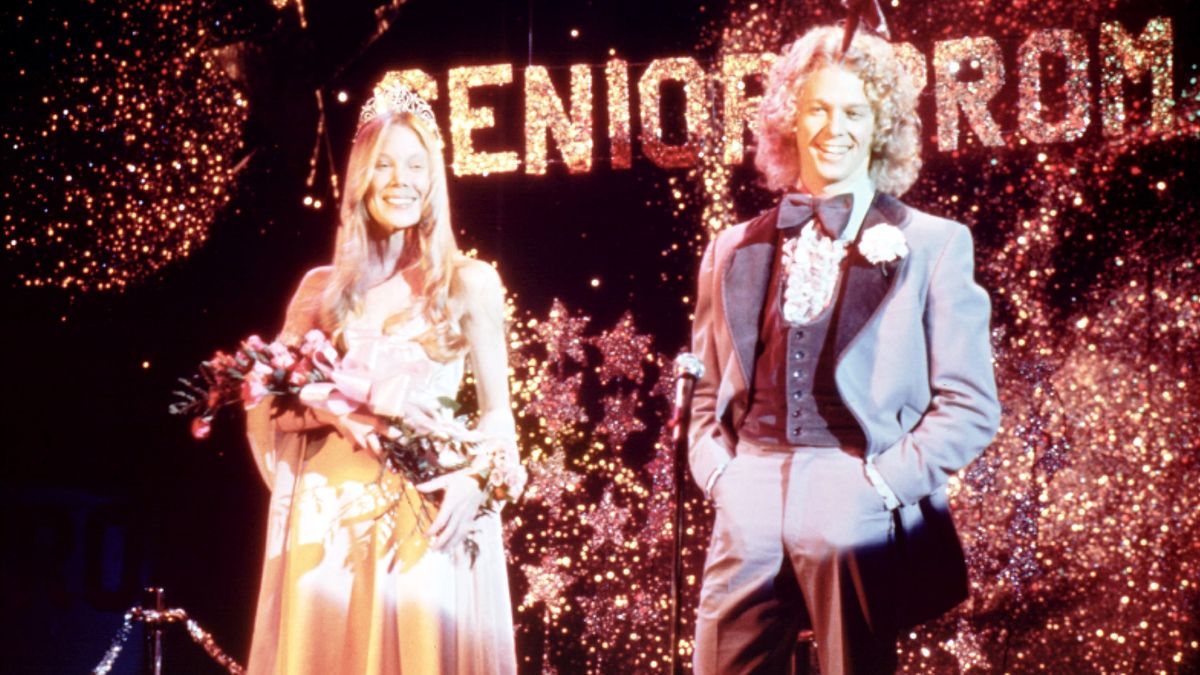 Combine the dark forces of fanatical religion, high school bullying, a prom prank gone wrong and telekinesis, and you get Brian De Palma's 1976 supernatural horror flick Carrie. Based on Stephen King's novel by the same name, Carrie stars Sissy Spacek as the young leading lady who gets her ultimate revenge by killing all of her high school enemies and even her well-intentioned teachers on prom night!

Considering Carrie is one of the classic horror films that is a must-watch during the Halloween season, we're taking a stroll down bloody memory lane to see what the cast is doing or has done ever since. 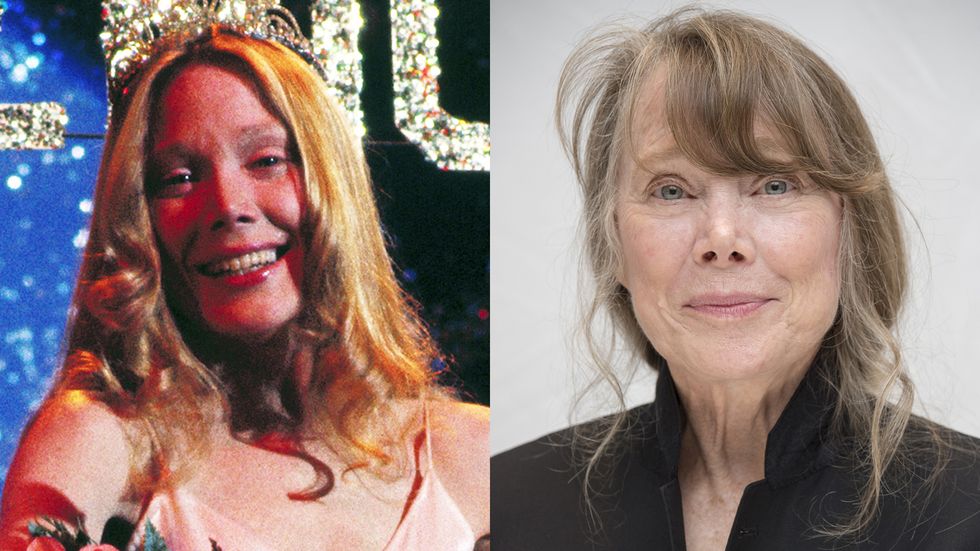 Kids loved to bully Carrie White, and her religious zealot mother made her life a living hell. Powerful at showing Carrie's isolation and vulnerability, Sissy Spacek also could conjure a scary side, which she showed through Carrie's killer telekinetic powers after she was humiliated by the popular kids at prom. Spacek was so haunting as Carrie that the film produced her first Oscar nomination. Afterward, the actress had the pick of the litter on film projects, including 3 Women (1977) and Coal Miner's Daughter (1980), for which she nabbed an Oscar for Best Actress. Other starring roles include The River (1984), In the Bedroom (2001), Four Christmases (2008) and The Help (2011). On television, Spacek starred in Big Love, Bloodline, Castle Rock and Homecoming.

"I see your dirty pillows!" Margaret White exclaimed to Carrie, referring to her girly breasts! Playing Carrie's religiously freaky mother, who stabbed her for being a "sinful" child, Piper Laurie gave a wonderfully unhinged performance and was nominated for an Oscar for her supporting role. Post Carrie, Laurie starred in Children of a Lesser God (1986) and on television shows like Days of Wine and Roses and Twin Peaks, earning a Golden Globe for the latter. In more recent years, she's appeared on ER, Will & Grace, Law & Order and the crime film White Boy Rick (2018).

It's strange to see the sweetness of Amy Irving turn into the nastiness of Sue Snell, who threw tampons at Carrie in the girl's locker room in jest! In an attempt at redeeming herself for her being so cruel to Carrie, Sue convinced her boyfriend Tommy Ross to take Carrie to the prom. Although Sue's life was spared at the prom death-fest, Carrie gave her something to be traumatized about in the end. Irving had a highly successful career after the horror film, starring in films like Yentl (1983), Crossing Delancey (1988) and Deconstructing Harry (1997). In 1999 she reprised her role as Sue in The Rage: Carrie 2 and went on to star in Traffic (2000). On Broadway, Irving appeared in Amadeus (1980), Broken Glass (1984) and The Coast of Utopia (2006-07).

After girlfriend Sue convinced Tommy to take Carrie to the prom, he acquiesced and ended up acting like the perfect gentleman. While his friends laughed at the shy, feeble Carrie, Tommy danced with her and even persuaded her to vote for herself for prom queen. Unfortunately, the bucket of pig's blood that drenched Carrie fell straight on to Tommy's head and knocked him out, most likely killing him. As Tommy, actor William Katt was a sizzling star of the 70s and 80s. He starred in the films First Love (1977) and Butch and Sundance: The Early Days (1979) but he was most famous for his early 80s TV role in The Greatest American Hero. He later starred in the Perry Mason TV-movie series (1985-1988).

Miss Collins was the high school gym teacher who showed sympathy for Carrie and stuck up for her when the mean girls were taunting her. Unfortunately, Miss Collins, who was portrayed by actress Betty Buckley, didn't receive any sympathy in return when Carrie went on her rampage. She died when Carrie used her powers to slam a basketball goal into her body. After Carrie, Buckley, a seasoned Broadway actress, won a Tony for her role in Cats in 1983 and starred in Sunset Boulevard (1994-96). On television she starred in Eight Is Enough and more recently in Oz and Preacher.

Rebellious mean girl Chris Hargensen loved picking on Carrie, and she would regret it... to death. Blaming Carrie for her being put in detention, Chris recruited her boyfriend Billy to help her get revenge. Both were responsible for the pig's blood being spilled on the newly minted prom queen, who would later thank them by turning them into a ball of flames in their car. Post Carrie, actress Nancy Allen married Carrie director De Palma and starred in his films Dressed to Kill (1980) and Blow Out (1981). She was also known for her roles in Strange Invaders (1983), The Philadelphia Experiment (1984), the RoboCop franchise (starting in 1987) and Poltergeist (1988).

More of a follower than a leader, Billy Nolan gave into his girlfriend Chris' demands and crafted a plan to embarrass Carrie. But their plan failed and turned into their worst nightmare as they watched Carrie annihilate their friends at prom. Vowing to kill Carrie, they instead met their doom together. Playing Billy Nolan was John Travolta's first major role in the film, but he surpassed that in a colossal way after he starred in Saturday Night Fever (1977) and Grease (1978). Since then, Travolta has had his pick of blockbuster hits like Pulp Fiction (1994), Get Shorty (1995), Face/Off (1997), Swordfish (2001), Hairspray (2007), The Taking of Pelham 123 (2009) and Gotti (2018). On the small screen, he is known for starring in Welcome Back, Kotter and American Crime Story's The People v. O. J. Simpson.

P.J. Soles had a talent for starring in blockbuster scary movies. Portraying Norma Watson in Carrie, she was Chris' mean girl sidekick that ended up being burned alive. Two years later, Soles played Lynda van der Klok in Halloween (1978), who also met a premature death at the hands of Michael Myers. After her dip into the horror pool, the actress found joy in a string of comedic films, such as Rock 'n' Roll High School (1979), Private Benjamin (1980) and Stripes (1981). In 2005 she returned to horror in the cult classic The Devil's Rejects.

Mr. Fromm really lit things up, thanks to Carrie's rage. As Carrie's high school English teacher, the poor guy met his doom after he got electrocuted by the fallen prom queen, inadvertently causing the fire at the gym. But actor Sydney Lassick had already made a splash before Carrie, playing timid manic depressive Charlie Cheswick in Miloš Forman's One Flew Over the Cuckoo's Nest in 1975. Lassick would later star in the films The Unseen (1980) and Sonny Boy (1989) and Deep Cover (1992). Some of his television appearances included Eight Is Enough, Hawaii Five-O, Moonlighting, Knots Landing and The X-Files.