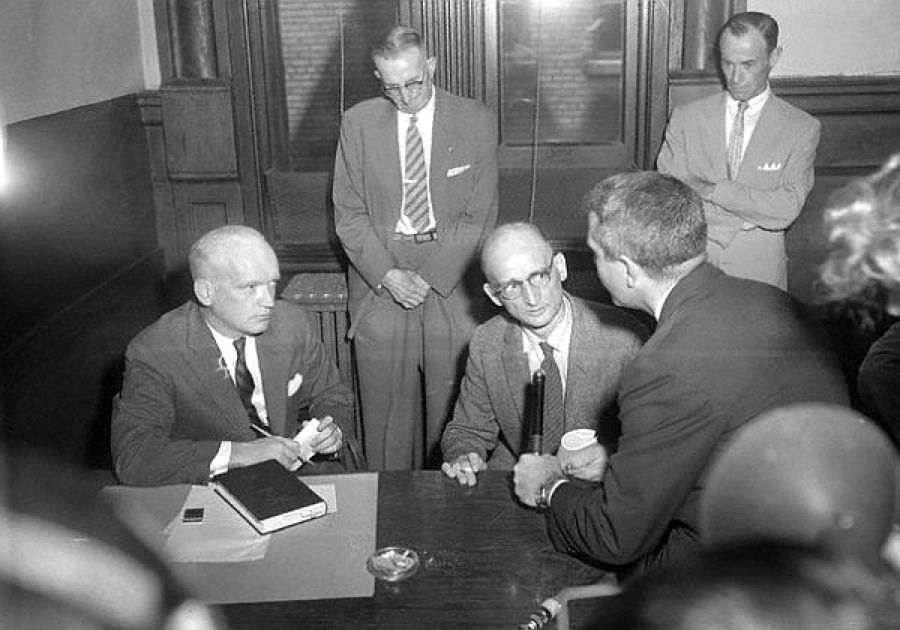 Steven Spielberg's Bridge of Spies dramatizes an incredible spy exchange that took place at the height of the Cold War. It stars Tom Hanks as attorney James Donovan, a man who first defended an accused Russian operative, then negotiated his swap for an American pilot held by the Soviet Union. In 1964, Donovan published a memoir about his unforgettable experiences called Strangers on a Bridge.

Here’s a look at some of the real-life events and people that inspired the movie:

Rudolf Abel was arrested while undercover in the U.S.

In 1948, a well-trained Soviet intelligence agent arrived in the United States. Using the alias Emil Goldfus, he set up an artist's studio in Brooklyn as a cover. While his real name was William Fisher, he would become best known as Rudolf Abel.

In 1952, Abel had the misfortune to be assigned an incompetent underling: Reino Hayhanen. After a few years of heavy drinking, and with no intelligence-gathering accomplishments, Hayhanen was told to return to the Soviet Union. Fearing the punishment that his shortcomings would bring, Hayhanen asked for asylum at the U.S. Embassy in Paris in May 1957.

Abel had once made the mistake of bringing Hayhanen to his studio. The defector was therefore able to tell the FBI how to find his superior; on June 21, 1957, Abel was arrested in a New York City hotel room.

Donovan believed everyone deserves a defense

After refusing to cooperate with the U.S. government, Abel was indicted on espionage charges. Now he needed a lawyer.

Defending an alleged Soviet spy wasn’t a sought-after assignment in 1950s America. But the Brooklyn Bar Association knew just the man for the job: James B. Donovan.

Donovan was an insurance lawyer who'd worked for the Office of Strategic Services (forerunner to the CIA) during World War II. He’d also served as associate prosecutor at the principal Nuremberg trial. Most importantly, he believed that everyone — even a suspected spy — deserved a vigorous defense, and accepted the assignment. (Though Donovan and his family experienced some criticism, including angry letters and middle-of-the-night phone calls, his commitment to standing up for Abel's rights was largely respected.)

Abel was convicted on all three accounts

Donovan, supported by two other lawyers, scrambled to get ready for Abel's trial, which began in October 1957. Abel faced charges of 1) conspiracy to transmit military and nuclear information to the Soviet Union; 2) conspiracy to gather this information; and 3) being in the United States without registering as a foreign agent.

Evidence against Abel had been found in his hotel room and studio. It included shortwave radios, maps of U.S. defense areas and numerous hollowed-out containers (such as a shaving brush, cufflinks and a pencil). Another piece of evidence was a hollow nickel that Hayhanen had lost soon after his arrival in New York. (In 1953, a newsboy had found the nickel and the microfilm it contained.)

Despite Donovan’s attempts to explain away or downplay this evidence — he mentioned that many magic acts used hollow coins — and an effort to discredit Hayhanen, Abel was convicted on all three counts on October 25, 1957.

Donovan had to fight for Abel's life

After his conviction, Abel faced more than prison: transmitting strategic information to a foreign country carried a potential death sentence. Donovan now had to fight for his client’s life.

Fortunately, the lawyer was prescient enough to argue that it might be a good idea to keep a spy around: "It is possible that in the foreseeable future an American of equivalent rank will be captured by Soviet Russia or an ally; at such time an exchange of prisoners through diplomatic channels could be considered in the best national interest of the United States."

Donovan won this battle — on November 15, 1957, Judge Mortimer Byers sentenced Abel to 30 years' imprisonment, not death, on the most serious charge.

While Abel headed to prison, Donovan continued to work on his client's behalf. Abel had been arrested and held by Immigration and Naturalization Service officers, but FBI agents had questioned him and searched his hotel room without obtaining a warrant themselves. Donovan believed this violated Fourth Amendment protections against unreasonable search and seizure, and he filed an appeal to that effect.

Even though Abel was a foreign national, Donovan — and the courts — believed he deserved full constitutional protection, and eventually the Supreme Court agreed to consider the case. But on March 28, 1960, the Court ruled 5 to 4 against Abel.

The U.S. government offered to release Abel if the Soviet Union released a captured American

After his appeal failed, it looked like Abel might spend decades in prison. Then pilot Francis Gary Powers was brought down over the Soviet Union on May 1, 1960. Powers had been flying a U-2 spy plane, and Soviet officials tried him for espionage; he received a 10-year sentence.

When Powers was captured, there was talk that he could be swapped for Abel. Oliver Powers, the pilot's father, even wrote to Abel about an exchange. In 1961, Donovan received a letter from East Germany — sent with KGB oversight — confirming that side's interest in a deal.

The U.S. government was also willing to give up Abel for Powers. However, it needed someone to hammer out the details.

Donovan headed to Germany to negotiate the swap

Donovan was asked to negotiate the swap. Government officials told him that Powers was the priority, but there were two American students also being held behind the Iron Curtain: Frederic Pryor was facing trial in East Germany for spying and Marvin Makinen was serving time in Russia for photographing Soviet military installations.

Donovan was also told he wouldn't be working in an official capacity — if anything went wrong during negotiations in East Berlin, he'd be on his own. Still, he decided to take his chances. Without telling anyone — even his family — where he was really going, Donovan headed to Europe in late January of 1962.

After arriving in West Berlin, Donovan made several crossings into East Berlin by S-Bahn train. He had to face a gauntlet of guards at the border of the divided city; he also encountered a street gang and East German police on different occasions. Yet it was his negotiations — during which he had to deal with both Soviet and East German representatives — that were the most frustrating.

At one low point, East German lawyer Wolfgang Vogel presented an offer to exchange Pryor for Abel, with no release of either Powers or Makinen. Then Soviet official Ivan Schischkin told Donovan that Makinen would be released instead of Powers. Neither offer was acceptable to the U.S., and Donovan threatened to break off negotiations.

Eventually, it was agreed that Pryor would be released separately, to be immediately followed by an exchange of Powers and Abel. (Makinen's release would come in 1963.)

On February 10, 1962, Donovan, Abel and others arrived at the Glienicke Bridge, which connected East and West Germany. The American and Soviet sides met in the center of the bridge at 8:20 a.m. But they had to wait for confirmation of Pryor's release to complete the exchange.

At 8:45 the Americans, at last, got word that Pryor had been delivered to Checkpoint Charlie, a crossing point between East and West Berlin. Abel and Powers were officially exchanged at 8:52 in the morning.