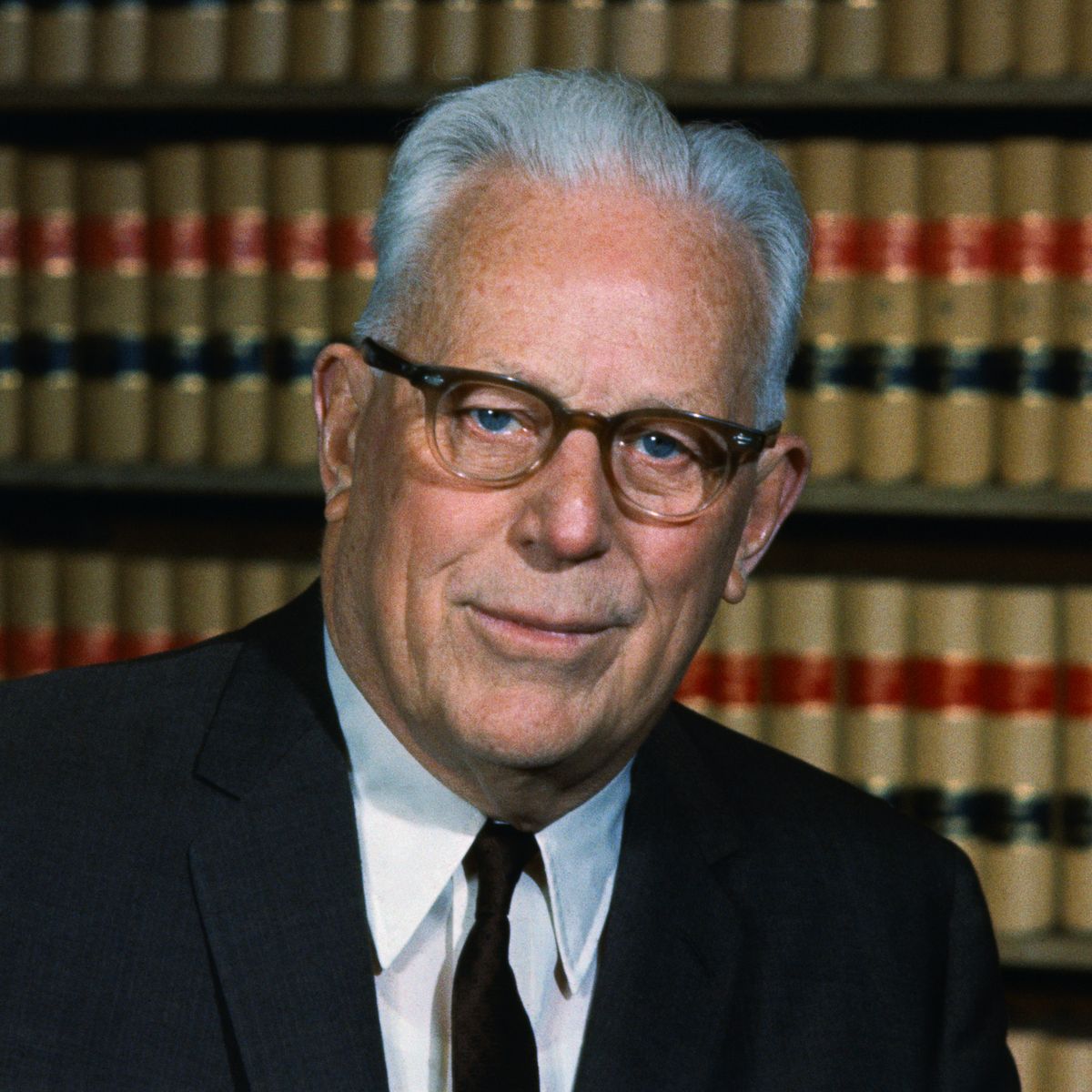 Who Was Earl Warren?

Earl Warren served in the military during World War I and later became a county district attorney. He won election to his home state's governorship, holding that position from 1943 until 1953, and was then appointed chief justice of the U.S. Supreme Court. Warren led the Court through many landmark cases dealing with race, justice, and representation. After John F. Kennedy's assassination, Warren headed the investigating commission. He retired from the bench in 1969 and died in 1974 in Washington, D.C.

Born on March 19, 1891, in Los Angeles, California, Earl Warren went on to become an influential politician and chief justice of the U.S. Supreme Court. He came from a working-class family of Norwegian immigrants, with his father employed by the Southern Pacific Railroad. Growing up in Bakersfield, California, Warren did well in the town's public schools. He then attended University of California, Berkeley, for both his undergraduate and law degrees.

In 1914, Warren was admitted to the California Bar. He served in the U.S. Army during World War I, rising to the rank of First Lieutenant. After his discharge in 1918, he committed himself to public service, working as the deputy district attorney for Alameda County, California.

In 1925, Warren was elected county district attorney, making a controversial call years later when he advocated for the detention of Japanese Americans in California during World War II. He would reportedly come to regret helping to orchestrate a plan that removed more than 100,000 people of Japanese heritage from their homes and livelihoods and placing them in internment camps.

As the war continued, Earl Warren became one of California’s rising political stars. He won the governorship in 1942, a post he held for three terms, with an outlook that was considered both fiscally conservative and socially progressive. He reduced taxes, created an emergency fund for the state and increased local spending on higher education and care for the elderly.

In 1948, Warren moved into national politics as the Republican vice presidential candidate and running mate of Thomas Dewey, who was defeated in his presidential bid by Harry S. Truman.

During Warren's third term as governor, in 1953 President Dwight D. Eisenhower, a moderate conservative, nominated Warren to be chief justice of the U.S. Supreme Court stating, "He represents the kind of political, economic, and social thinking that I believe we need on the Supreme Court." Warren quickly won legislative approval and became the court's leading judge, succeeding the late Fred Vinson. In the next few years, Warren led the Court in a series of liberal decisions that transformed the role of the U.S. Supreme Court. Warren was considered a judicial activist, in that he believed the Constitution should be interpreted with the times. Eisenhower later remarked that his appointment was "the biggest damned-fool mistake I ever made." As chief justice, Warren spearheaded radical changes in areas of equal protection, law enforcement, and representative apportionment.

Warren helped end school segregation with the court's decision in Brown v. Board of Education (1954). The Fourteenth Amendment didn’t clearly disallow segregation and the doctrine of separate but equal was deemed constitutional in the 1896 case of Plessy v. Ferguson. However, the Plessy decision pertained to transportation, not education. In his written opinion, Warren stated that "in the field of public education, the doctrine of 'separate but equal' has no place. Separate educational facilities are inherently unequal."

During its tenure, the Warren Court generated a seismic shift in the area of criminal justice procedure. Beginning in 1961, the case of Mapp v. Ohio questioned whether credible evidence obtained through an illegal search could be admissible in court. In 1914, the Supreme Court ruled in Weeks v. United States that evidence illegally obtained could not be used in federal court. However, that ruling did not extend to the states. In 1961, the Warren Court ruled that illegally obtained evidence is not admissible in state courts due to the Fourteenth Amendment’s due process clause. Subsequent court rulings have placed some exceptions to this ruling, but its main intent remains in force.

In 1966, the Warren Court made another controversial ruling on criminal justice procedures in the case of Miranda v. Arizona. In a close 5-4 decision, the court ruled that a suspect must be informed of his rights to remain silent and have counsel at the time of arrest, or the arrest and all the evidence obtained are inadmissible in court.

While Warren was chief justice, the court also dealt with state-sponsored discrimination though apportionment of legislative districts. For decades, the state of Alabama had used the 1900 census to apportion representation in state legislative districts. Since then, the population had shifted from rural to urban areas. The greater population in the urban areas (primarily African American and other minorities) was disproportionately represented because the state used the older census. In Reynolds v. Sims (1964), the court ruled that Alabama had to reapportion its state legislative districts based on current population figures. Writing for the Court, Chief Justice Earl Warren argued the right to vote freely and unimpaired preserves all the other basic civil and political rights.

In one of its more personal cases affecting the lives of ordinary people, the Warren Court took on state anti-miscegenation laws banning interracial marriages in the case of Loving v. Virginia (1967). Mildred and Richard Loving were married in Virginia, but soon were convicted of violating the law against interracial marriage. They fled to live in Washington, D.C. for a few years, but then returned to Virginia. The Lovings were arrested, found guilty, and sentenced to a year in jail. Inspired by the Johnson administration’s fight for civil rights, Mildred Loving wrote a letter to then-Attorney General Robert Kennedy, who advised the couple contact the ACLU. Two of its lawyers represented the Loving at the Supreme Court. In a unanimous decision, the Court ruled that anti-miscegenation laws were unconstitutional under the Equal Protection Clause of the Fourteenth Amendment.

In addition to his work on the Supreme Court, Warren also ran the 1963-64 investigation into the assassination of President John F. Kennedy. He had been asked by President Lyndon B. Johnson to serve on this investigative committee, which became known as the Warren Commission. In the affiliated report, investigators asserted that Kennedy had been killed by a lone gunman, Lee Harvey Oswald. They found no evidence of Oswald's involvement in a larger conspiracy.

After 16 years on the bench, Warren retired from the Supreme Court in 1969. After suffering from a series of heart problems in his final years, Warren died on July 9, 1974, of congestive heart failure. His colleague, Associate Justice Thurgood Marshall, shared his thoughts about Warren with The New York Times, saying "When history is written, he'll go down as one of the greatest chief justices the country has ever been blessed with."