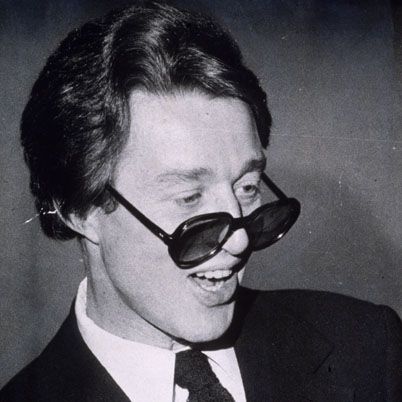 Roy Halston Frowick, best known as Halston, was an iconic clothing designer of the 1970s. He started off designing hats, but it was his dresses that made him famous. They were sexy and streamlined, perfect for high-strung nights on a disco floor. After two decades of dressing the jet-set, Halston was diagnosed with AIDS. He passed away in 1990.

American fashion designer Halston was born on April 23, 1932, in Des Moines, Iowa. The son of a Norwegian-American accountant and his wife, Halston was originally given the name Roy Halston Frowick. He later dropped his first and last names, preferring the moniker. As a boy, Halston loved to alter and make clothes for his mother and sister. He studied at Indiana University and then at the Art Institute of Chicago. While attending night courses at the Art Institute, he worked as a fashion merchandiser at the upscale chain department store Carson Pirie Scott.

Soon after, he met André Basil, a hairdresser who owned a prestigious salon at the Ambassador Hotel. Taken by both the man and his work, Basil set up a display of Halston’s hats in his salon. When Basil opened his Boulevard Salon on North Michigan Avenue, he offered Halston half the space for display. In 1959 their personal relationship ended, and Halston moved to New York to take a design position with the respected milliner Lily Daché.

Halston’s hat designs brought the fantastic to whimsy; he used all manner of jewels, flowers and fringe to decorate hoods, bonnets and coifs. Within a year, he was hired to serve as head milliner for the luxury retailer Bergdorf Goodman. In 1961, Jacqueline Kennedy made his work famous when she wore a pillbox hat of his design to her husband’s presidential inauguration. Halston’s friends and clients soon included some of the most alluring and well-known women in the world, including Rita Hayworth, Liza Minnelli, Marlene Dietrich and Diana Vreeland.

Halston began designing women's wear in 1966, offering a perfect look for the international jet set of his era. His line was renowned for sexy, yet elegant pieces. In the fall of 1972, he introduced a simple shirtwaist dress made from “Ultra suede,” a fabric that was washable, durable and beautiful. Two years later, he offered the world his most iconic design, the halter dress. It was instant hit in America’s discotheques, giving women a narrow, elongated silhouette. Halston’s trademark sunglasses, worn both day and night, completed the look.

Halston was known as the first designer to fully license himself as a brand onto itself; his influence went beyond style to reshape the business of fashion. Through a licensing agreement with JC Penney, he created designs that were accessible to women at a variety of income levels. He also became influential in uniform design, changing the entire feel of Braniff International Airways’ staff uniforms.

In spite of his achievements, his increasing drug use and failure to meet deadlines undermined his success. In 1984, he was fired from his own company and lost the right to design and sell clothes under his own name in. However, he continued to design costumes for his friends Liza Minnelli and Martha Graham. He was a long-time and central figure in the nightlife scene of New York’s Studio 54 disco. He died of lung cancer and complications of AIDS in San Francisco, California, in 1990.