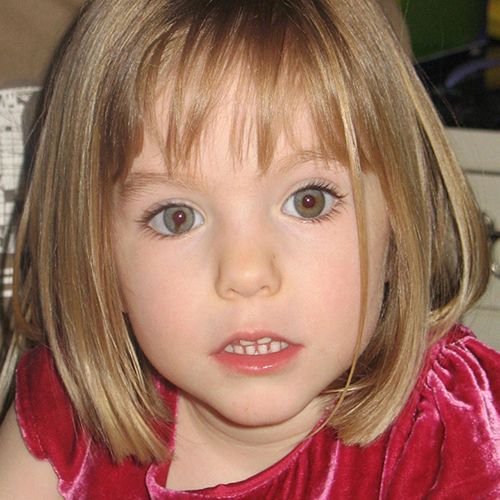 Who Is Madeleine McCann?

Madeleine McCann was a 3-year-old British toddler when she went missing on the evening of May 3, 2007, during a family holiday trip in Portugal. Her parents, Kate and Gerry McCann, were considered suspects during the height of the investigation by the Portuguese police but have since been cleared. The McCanns have used private investigators in addition to the Portuguese investigation, and in 2011 they received even more assistance by Scotland Yard, which launched its own inquiry, called Operation Grange. Even though the 10th anniversary of her disappearance passed in May 2017, Madeleine is still one of the most famous missing-persons cases in the U.K. and in Portugal.

Madeleine's parents Kate and Gerry McCann are both physicians. Born in 1968 near Liverpool, Kate graduated from the University of Dundee with a degree in medicine. Although she's practiced in various fields and has taken time off, Kate is now a general practitioner.

Gerry was born in 1968 in Glasgow and graduated from the University of Glasgow with a bachelor's in physiology/sports science in 1989. In 2002 he received his medical degree. He's currently a cardiologist consultant.

In 1993 the couple met in Glasgow and married five years later. They welcomed the birth of Madeleine in 2003 and then twins Sean and Amelie in 2005.

Madeleine is described to have had blonde hair and green-blue eyes. The most important physical distinctions she had was a brown spot on her left calf and a rare, dark blemish in the iris of her right eye.

Approaching the end of a week-long family holiday in Portugal, the McCanns left three-year-old Madeleine and her two-year-old twin siblings, Sean and Amelie, unattended in their rented apartment at the resort Praia da Luz in the Algarve region, while they dined at a nearby tapas restaurant with friends on the night of May 3, 2007.

The McCanns were on holiday with seven other friends (eight children in total) and began dining around 8:30 p.m. The restaurant was about 180 feet away from the apartment complex, which was not gated and was accessible to the public. Each parent took turns checking on their respective children throughout the night, and it was at around 10 p.m. that Kate discovered Madeleine was missing.

In the immediate weeks ahead, the Portuguese authorities believed the McCanns were responsible for the disappearance of their daughter, concocting a theory that Madeleine had accidentally died in the apartment and the McCanns had gotten rid of her body. In September 2007 Kate and Gerry were labeled arguidos (suspects), but a year later, the label was lifted due to lack of evidence.

When the Portuguese chief inspector who led the case to find Madeleine, Goncalo Amaral, resigned in 2008, he shortly thereafter released a book, The Truth of the Lie, which became a best seller. In it he alleges that Madeleine accidentally died in the apartment, and in an attempt to cover it up, her parents faked her abduction. Calling the book "downright lies," Kate and Gerry sued Amaral for libel in 2009 and later won, but in April 2016, an appeals court overturned the decision.

On the eve of the 10th anniversary of Madeleine's disappearance in 2017, the McCanns sat down for an interview with The Guardian, expressing unrelenting determination that they would find their daughter.

“My hope for Madeleine being out there is no less than it was almost 10 years ago,” Kate said. Gerry added: “We are still looking forward, I think that’s the most important thing – we still hope.”

Asked about the controversy over the exorbitant cost of the investigations, Kate had this to say:

“I guess the one thing – because you always do feel guilty as the parent of a missing child – is that other families haven’t had the publicity and the money. The positive is that it has brought the whole issue of missing children to the forefront and I think people have benefited in different ways.”

'The Disappearance of Madeleine McCann'

In March 2019 Netflix unveiled the eight-part docuseries The Disappearance of Madeleine McCann.

Arriving two months before Madeleine's 16th birthday, the series revisits the early investigations, which focused on the parents as likely perpetrators of the crime, as well as a later one by British authorities, which produced a list of 38 viable suspects who had never been questioned.

Despite appearing throughout the documentary via old video clips and media footage, the parents did not participate in its production. "We did not see and still do not see how this programme will help the search for Madeleine and, particularly given there is an active police investigation, could potentially hinder it," they wrote on their Find Madeleine website. "Consequently, our views and preferences are not reflected in the programme. We will not be making any further statements or giving interviews regarding this programme."

Ever since Madeleine's disappearance, there have been over 8,000 potential sightings of her, with the investigation reaching close to a controversial £ 12 million pounds (almost $17 million US dollars).

In June 2020, U.K. authorities identified a 43-year-old German man as a potential suspect. The unidentified man, who is currently in prison for a sex crime, traveled around in a camper van living "a transient lifestyle” in southern Portugal's Praia de Luz area between 1995 and 2007, according to the BBC. The man reportedly had a telephone conversation that ended just over an hour before Madeleine went missing and the other person on the line is now a "key witness."

In response to the recent findings, the McCanns released a statement, in part saying, "All we have ever wanted is to find her, uncover the truth and bring those responsible to justice. We will never give up hope of finding Madeleine alive but whatever the outcome may be, we need to know, as we need to find peace."