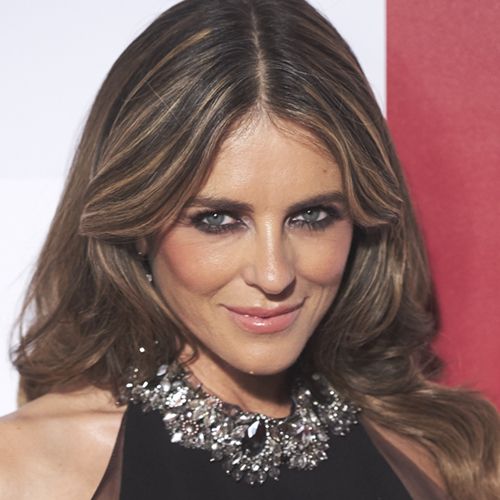 Who Is Elizabeth Hurley?

Elizabeth Hurley is an English model and actress who's starred in films such as Austin Powers: International Man of Mystery (1997), EDtv (1999) and Bedazzled (2000). In the mid-1990s she became the famous face of Estée Lauder's beauty campaigns, but it was her longterm relationship with fellow English actor Hugh Grant (they split on good terms in 2000) that contributed to her fame.

Elizabeth Jane Hurley was born on June 10, 1965 in Basingstoke, Hampshire, England. She was the middle child of teacher Angela Mary and army major Roy Leonard.

As a young girl, she took ballet lessons in hopes of going professional but got distracted in her teen years with the punk rock music scene. She was later expelled for having poor grades and for a time, immersed herself in hippie culture.

Hurley's film debut was in the anthology Aria (1987). Shortly after, she appeared in the Wesley Snipes-led action drama Passenger 57 (1992) but made her biggest splash as Desert Eagle-toting sultry spy Vanessa Kensington in Austin Powers: International Man of Mystery (1997). Two years later she appeared in EDtv (1999), as well as in the dark comedy Bedazzled (2000), in which she played the Devil, opposite Brendan Fraser.

On the small screen, Hurley's more memorable roles came much later in her career. In 2011 she joined the cast of Gossip Girl during its fifth season as media mogul Diana Payne and starting in 2015, took on the role of Queen Helena in E's The Royals, a fictional story about a modern royal family in London.

Hurley has worked on numerous advertising and fashion campaigns for brands like Jordache, Got Milk?, Monsoon and Lancel and has graced the cover of Vogue (British edition) three times. However, her most prominent campaign started in the mid-1990s as the face of Estée Lauder, which she signed up for at the age of 29.

Hurley attributes her youthful looks to the over two decades she's been working with the beauty company. "I’ve had an arsenal of free beauty products in my hands to use from any of the Estée Lauder companies," she said during an interview in 2017. "I have no excuse on skincare and makeup, so I’ve taken advantage of that. I do recommend to women to moisturize, and look after your skin – it’s incredibly important."

Hurley dated Hugh Grant for 13 years, even standing by him amid his prostitution scandal in 1995. The couple amicably parted ways in 2000. She briefly dated businessman Steve Bing in 2001, which produced her only child, Damien Charles Hurley. In 2002 she began a relationship with textile businessman Arun Nayar and married him in 2007 in an English castle. However, the couple soon separated a few years later and divorced in 2011. That same year she was briefly engaged to former Australian cricketeer Shane Warne, but by 2013 the couple decided to end their relationship.

As a close friend of David and Victoria Beckham, Hurley is godmother to their sons, Brooklyn and Romeo.

Hurley has one child, a son named Damien Charles (b. 2002), whose father is American businessman Steve Bing. Bing had originally denied Damien was his son, but a paternity test proved in fact that he was.