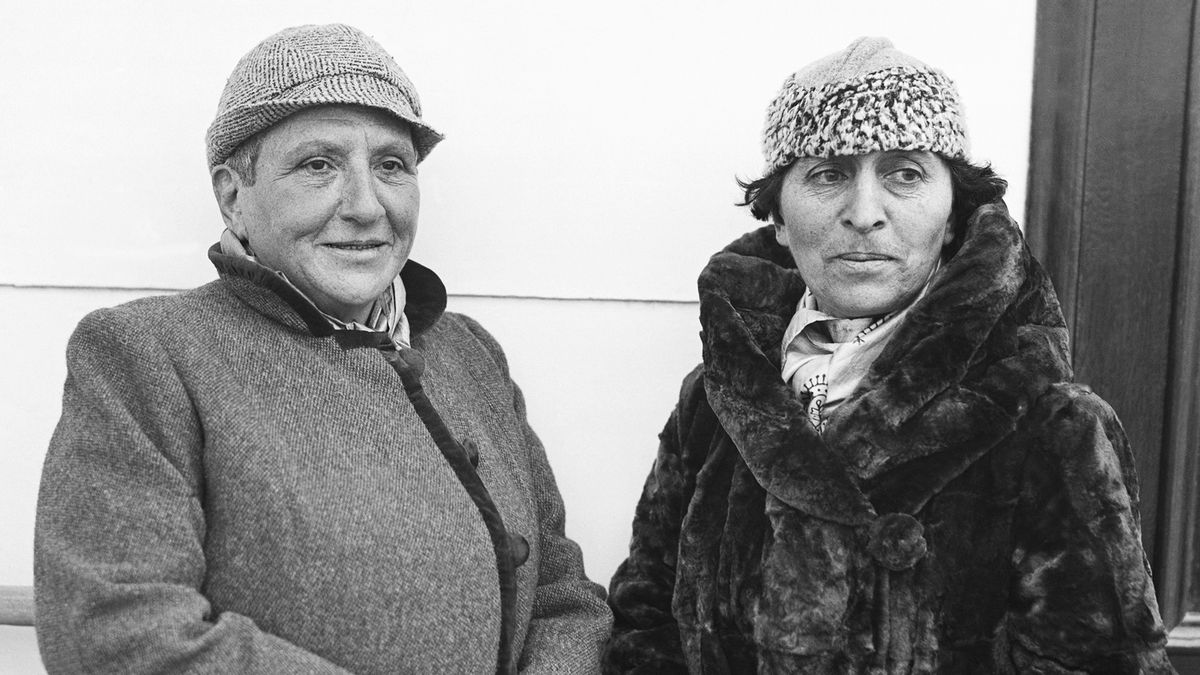 In late summer 1907, Alice B. Toklas left behind her father and brother in an earthquake-and-fire-ravaged San Francisco in search of new adventures in Paris.

If unsure of what her future in the City of Lights held, the once-promising concert pianist discovered the answer shortly after arriving at her destination and encountering avant-garde writer Gertrude Stein.

"She was a golden brown presence, burned by the Tuscan sun and with a golden glint in her warm brown hair," Toklas recalled decades later in her autobiography What Is Remembered. "She wore a large round coral brooch and when she talked, very little, or laughed, a good deal, I thought her voice came from this brooch. It was unlike anyone else's voice – deep, full, velvety like a great contralto's, like two voices."

Smitten, Toklas accepted the invitation to meet the following day, and they continued to do so for all successive days in the weeks, months and years to come until they were as inseparable as a printed word to its page.

They found common ground in their devotion to Stein's writing

As described in Diana Souhami's Gertrude and Alice, the two women presented an intriguing study of contrasts: Stein was a hefty woman with an equally large personality who enjoyed wearing loose robes and sandals, her appearance giving off the sense of "something ecumenical – like a cardinal, or a bishop." Toklas was tiny, sharp in features and expression, and known for her taste in flower-print dresses and her refusal to pluck the prominent hair growth on her upper lip.

For all their surface differences, the two had plenty in common: Both were raised in prominent Jewish families in the San Francisco Bay Area, and both had spent years wrestling with the affections and desires that made it clear they would never experience a conventional lifestyle in their home country.

Early in their relationship the two women got to know one another better on long walks through Paris and the various places they visited with friends and family. It was during one such outing, on a 1908 excursion in Normandy, that Stein "proposed" to her great friend.

Ultimately, they found their symbiosis in their shared devotion to Stein's writing. Impressed with her companion's groundbreaking work on Three Lives, Toklas headed over to Stein's apartment at 27 rue de Fleurus every morning to type up a manuscript for what became The Making of Americans.

"I got a Gertrude Stein technique, like playing Bach. My fingers were adapted only to Gertrude's work," she wrote in What Is Remembered. "Doing the typing of The Making of Americans was a very happy time for me. ... I hoped it would go on forever." 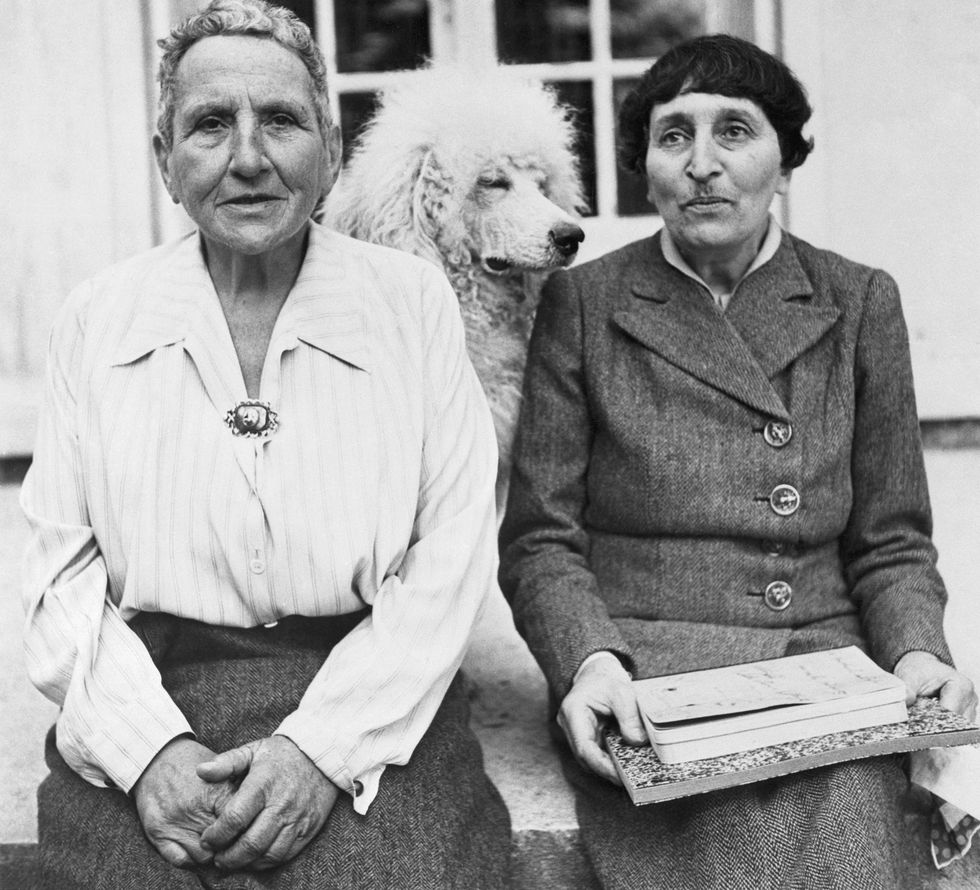 Gertrude Stein and Alice B. Toklas with their dog Basket in front of her home in France
Photo: Bettmann/Getty Images

Their relationship flourished after moving in together

After three years of Toklas' daily visits to 27 rue de Fleurus, and another three years of shared living arrangements with Stein's brother Leo, the two ladies finally had the place to themselves by 1913.

Theirs was a bastion of domestic tranquility and efficiency, with Toklas waking up early to supervise servants, plan meals and type manuscripts before settling in with Stein, a night owl, at around lunchtime. They left notes around the house signed DD and YD – for Darling Darling and Your Darling – and called each other nicknames like "Lovey" and "Baby."

Additionally, while the home was already known for hosting the salons that drew artistic icons like Pablo Picasso and Henri Matisse, the get-togethers were altered to reflect Toklas' preference for smaller, more controlled gatherings.

While the outbreak of World War I disturbed the everyday routine, it had zero effect on the time the women spent together. They launched themselves into delivering hospital supplies for the American Fund for French Wounded, zipping around France in a Ford acquired from Stein's cousin and christened "Auntie."

Toklas took a backseat to Stein but also ruled the roost

By the 1920s the 27 rue de Fleurus apartment was again the center of the Parisian literary art scene, this time with what was to become a famous succession of household dogs, and with American expatriates like Ernest Hemingway, F. Scott Fitzgerald and Man Ray in frequent attendance to bounce ideas off Stein and their peers.

While Toklas was tasked with entertaining the significant others during these meetings, she was, according to her New York Times obituary, more than capable of holding her own amid the fast-flowing intellectual banter, though she was mainly "content to let Miss Stein scintillate in public."

Additionally, friends seemed to understand that Toklas was the one who kept the entire operation running smoothly. The obituary describes a time when Stein was giving an interview, which abruptly ended when Toklas instructed her to "say goodbye to your guests." And Hemingway learned firsthand how disruptions to the domestic status quo would not be tolerated, as he was eventually excommunicated from the home over his reported attraction to Stein.

'The Autobiography of Alice B. Toklas' made them famous

For all her renown in Parisian artistic circles, Stein remained something of a fringe literary figure into the early 1930s, with the rest of the world entirely unaware of the existence of her assistant, collaborator and all-but-common-law wife.

That all changed with the 1933 publication of The Autobiography of Alice B. Toklas, Stein's account of their life together from Toklas' point of view. Unlike her difficult-to-follow "hermetic" works, the novel was written in a conventional style meant to echo Toklas' plainspokenness, and it became the author's first literary hit.

It also led to a highly publicized 1934 book tour of America, which brought the women back to the States for the first time in decades and allowed them to meet luminaries such as George Gershwin, Charlie Chaplin and Eleanor Roosevelt. While Stein's lectures were largely well-received, the papers couldn't help but report on the presence of her "constant companion," without delving too deep into the nature of their relationship.

Their union ended with Stein's death

The Nazi occupation of Paris in 1940 again forced the women out of their comfort zone, a more demanding task now that they were well into their 60s. They avoided detection by lying low in southern France and sold art to buy provisions on the black market, through their now-priceless collection of paintings by Picasso and Matisse.

After the war, life briefly returned to something resembling normalcy. Toklas and Stein opened their home to the intellectually curious American GI's who were seeking encouragement or advice, and they toured Germany as part of Stein's assignment for Life magazine.

But their four decades of partnership was nearing its end with cancer taking root in Stein's stomach. A 1946 summer vacation in western France was cut short, and the two women found themselves waiting together at the American Hospital on the outskirts of Paris.

According to What Is Remembered, Stein's final words to Toklas were, "What is the answer?" With no reply forthcoming, Stein followed with, "In that case, what is the question?" She was then taken away for surgery, never to be seen alive by her lover again.

Toklas sought to guard her legacy

While that autobiography ends with Stein's death, Toklas' life continued for another two decades. She remained a figure of minor fame for her connection to the "Lost Generation" years of post-WWI Paris and her own writing, which included The Alice B. Toklas Cook Book (and its infamous recipe for hashish brownies).

But Toklas was far more concerned with protecting Stein's legacy than promoting her own. Indeed, Gertrude and Alice notes that as she commenced to write What Is Remembered in the late 1950s, Toklas revealed her intentions to longtime friend Carl Van Vechten: "We are agreed that the reminiscences should be centered on Baby and her work," she wrote. "You agree – don't you? I am nothing but the memory of her."

By the time she passed away in March 1967, Toklas had arranged to be buried next to Baby in Paris' Père Lachaise Cemetery. Fittingly, she chose to have her inscription discreetly placed on the back of her headstone, a final nod to her longtime desire to remain entwined to the memory of Stein while modestly ceding the spotlight to her more famous companion.