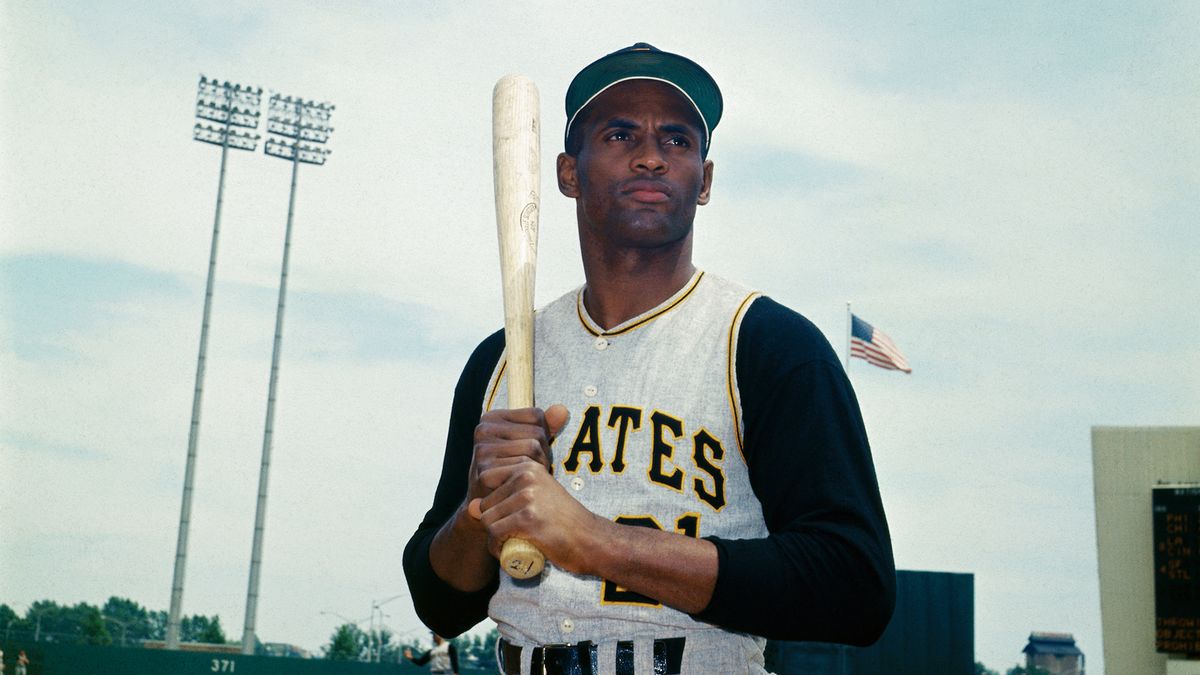 Baseball fans know of Roberto Clemente's professional accomplishments – 3,000 career hits, .317 batting average and two World Series championships with the Pittsburgh Pirates – along with the tales of his legendary throwing arm and his wild dashes around the basepaths.

Yet for all his successes in a baseball uniform, he remains as well-known for his actions in the other facets of his too-brief life, a testament to his character.

Early in his career, he became an advocate for Latino culture

As detailed in Roberto Clemente: The Great One, he was born in 1934 in Carolina, outside of Puerto Rico's capital city of San Juan. Clemente grew up with a roof over his head and enough to eat, though he certainly understood the struggles of the working class: His father, Melchor, spent all day at his job as a sugarcane foreman and his mom, Luisa, toiled as a laundress when not chasing down her seven children.

In early 1954, Clemente left Carolina to play for the Montreal Royals, the top minor league team of the Brooklyn Dodgers. That November, he was claimed by the Pirates, the organization which he would be associated with for the rest of his career.

After a year in which he faced Jim Crow discrimination in the South for the first time, Clemente encountered a different sort of racism as a big-league rookie with a developing understanding of English. Some writers took to relaying his quotes phonetically, making him sound like someone who had just stepped out of the jungle: "Me like hot weather, veree hot. I no run fast in cold weather. No get warm in cold. No get warm, no play gut," he reportedly told a Pittsburgh Press writer in June 1955.

The depictions angered Clemente, turning him into an advocate for Latino culture through his desire to achieve respect. Meanwhile, if he was off-putting to the press, he at least endeared himself to Pirates fans with his speed and his powerful throws from right field, along with his willingness to sign autographs for hours after games. 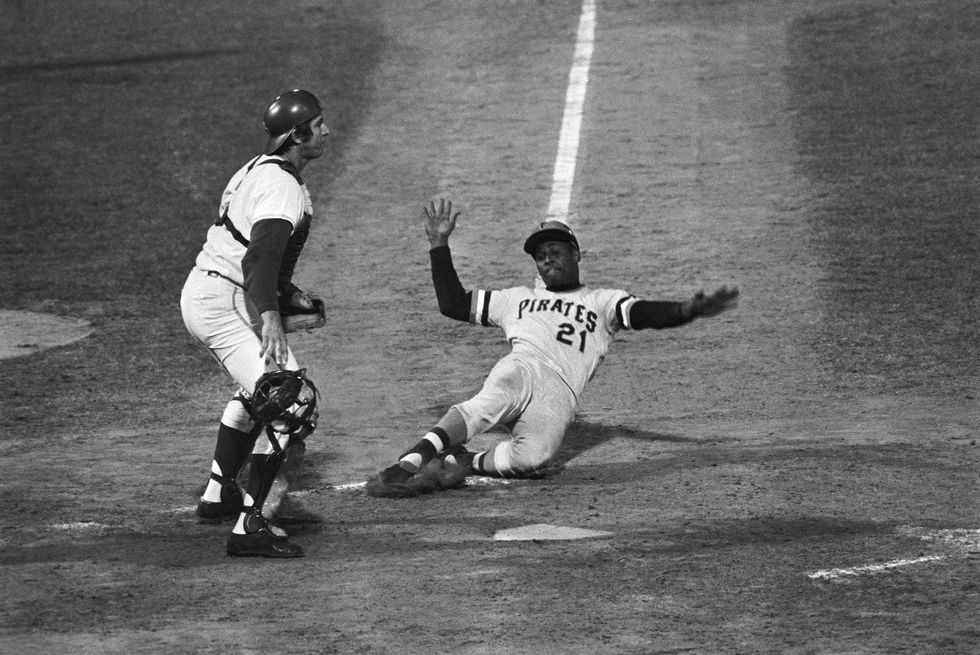 Clemente's popularity rose to a new level with the start of the 1960s, the year the Pirates defeated the New York Yankees in the World Series. During the post-game celebrations, Clemente left to thank people on the street. The following year, he demonstrated he belonged alongside the game's greats like Willie Mays and Hank Aaron by winning his first batting title.

Around this time, noted longtime friend and baseball employee Luis Mayoral: "People started seeing the true Clemente as a ballplayer and the true Clemente coming out of his shell, speaking out for his rights. Not only for his rights, but for Latinos and African-Americans who had grown up and still grow-up in the states. ... Roberto was not afraid to speak. But he had to reach a level of stardom where people would say, 'Hey, we gotta listen to this guy.'"

Clemente embraced the opportunities to make a difference in the lives of others. He set aside fan mail from kids in hospitals, noting to visit the next time the Pirates stopped to play in a city. Back in Puerto Rico, he began conducting regular offseason baseball clinics for children and was known for handing out money to strangers.

In 1964, Clemente expanded his responsibilities by marrying Carolina's Vera Zabala, with whom he would have three children, and becoming the manager of a Puerto Rican baseball team, the Senadores.

Outside of baseball and community work, Clemente showed himself to be a man of many interests. He enjoyed making ceramics and writing poetry, and could play the organ and harmonica by ear. Bothered by pack pain since an automobile accident at the beginning of his career, he had become an adept masseuse and was looking into further pursuit of chiropractic work after the conclusion of his playing career.

After becoming the first Latino player to win the National League Most Valuable Player Award in 1966, Clemente wielded immense influence with the Pirates organization, particularly as a liaison between other Latin players and the front office. For his charitable work, he was honored with a Roberto Clemente Night shortly after the debut of Pittsburgh’s new playing field, Three Rivers Stadium, in 1970.

But he was still drawing the most attention for his remarkable all-around play. In October 1971, at the age of 37, Clemente batted a sizzling .414 against the heavily favored Baltimore Orioles in the World Series, his homerun helped clinch the deciding Game 7 win for the Pirates. For this, he became the first Latin American player to be named World Series MVP, a moment he commemorated by asking for his parents' blessings in Spanish on TV afterward.

Enjoying the national recognition, Clemente sought to channel his celebrity toward bigger accomplishments. Upon receiving his MVP award, he told Sport magazine of his plans to build a sprawling "sports city" for kids in Puerto Rico with baseball fields, basketball courts, swimming pools and other facilities.

Even before his triumphant World Series, Clemente clearly was thinking on a larger scale for public good. In January 1971, he was praised for a heartfelt speech to baseball writers at an annual banquet in Houston, Texas, in which he said, "Any time you have an opportunity to accomplish something for somebody who comes behind you and you don't do it, you are wasting your time on this earth." 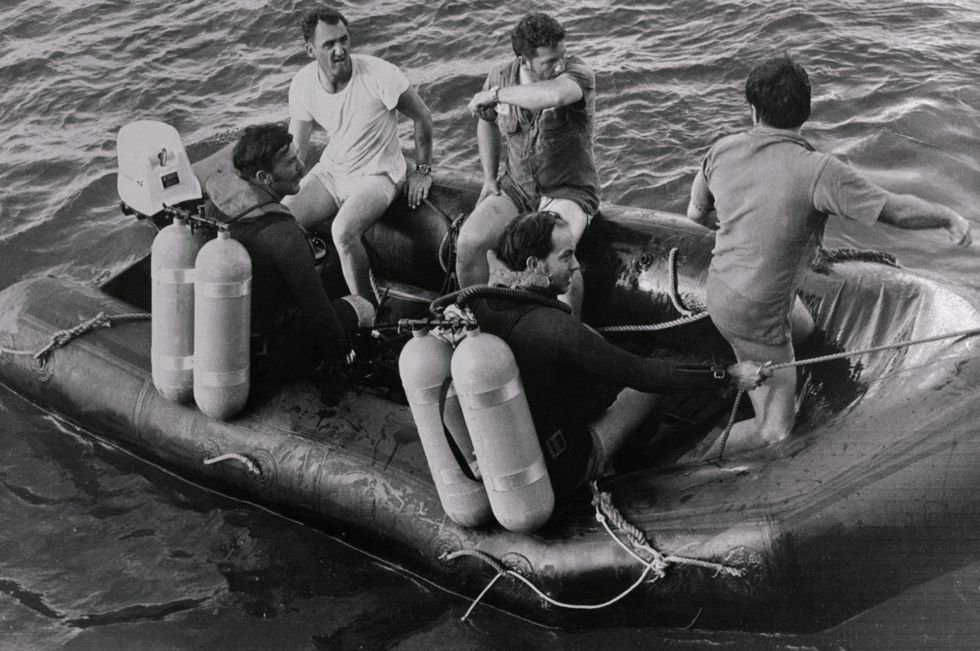 U.S. Navy divers searching for the bodies of Roberto Clemente and three others killed in a plane crash in a mercy mission to Nicaragua.; Photo: Getty Images

On December 23, 1972, a few weeks after Clemente had been in the country to manage an all-star team, a massive earthquake ripped through the Nicaraguan capital of Managua, leaving 10,000 dead with another 20,000 injured and 250,000 homeless.

Clemente worked nonstop through Christmas, raising funds and organizing relief supplies to be quickly sent to Nicaragua. Upon learning that the shipments had been confiscated by corrupt officials, Clemente decided to personally oversee a flight of supplies himself – over the protests of his seven-year-old son Roberto Jr., who alarmingly insisted that his plane was going to crash.

Despite the warnings – the ballplayer even had a dream he was watching his own funeral – on December 31, Clemente climbed into an overloaded DC-7 that had been delayed by several hours due to mechanical problems. Shortly after liftoff, the plane plunged into the sea, killing everyone on board.

Over his 38 years and four months, Clemente had made an indelible mark as a Hall of Fame baseball player, mentor, ambassador philanthropist and tireless humanitarian.

Furthermore, the example he provided inspired others to follow through on his goals: After his death, his family launched the charitable Roberto Clemente Foundation and made the Roberto Clemente Sports City a reality, ensuring that his impact would be felt long after he ran out of time to personally affect change himself.