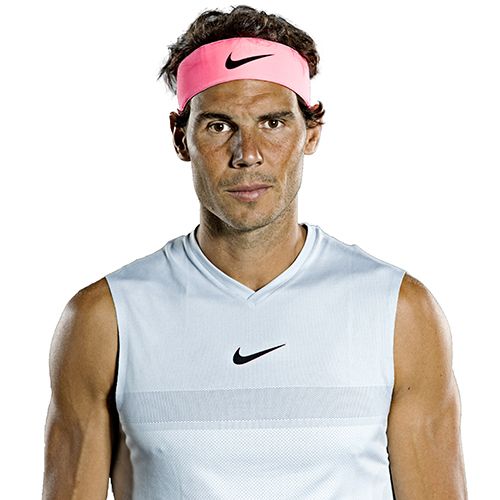 Who Is Rafael Nadal?

Rafael Nadal began playing tennis at age three and turned pro at 15. Known as the "King of Clay" for his skill playing on clay courts, as well as his topspin-heavy shots and tenacity, Nadal has won a record 13 French Open singles titles and holds the record for first all-time in the men's game with 22 Grand Slam titles.

Rafael Nadal was born in Mallorca, Spain, on June 3, 1986. When he was three years old, his uncle, Toni Nadal, a former professional tennis player, started working with him, seeing an aptitude for the sport in young Rafael.

At the age of eight, Nadal won an under-12 regional tennis championship, giving his Uncle Toni the incentive to step up his training. Toni noticed at the time that Nadal played his forehand shots with two hands, so he encouraged him to play left-handed, thinking it could give Nadal an edge on the court.

When Nadal was just 12 years old, he won the Spanish and European tennis titles in his age group. He turned professional at age 15. 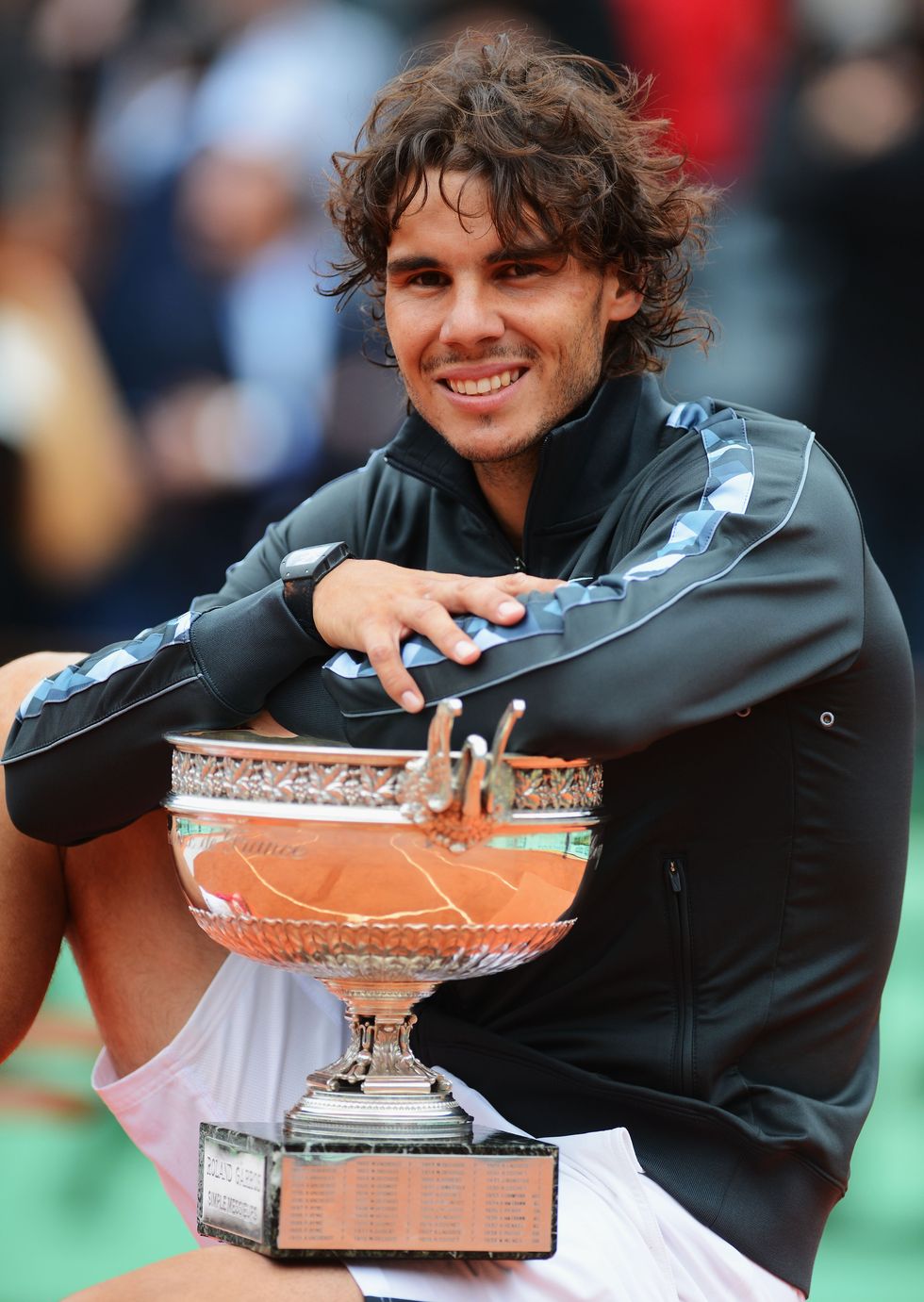 At the age of 16, Nadal made it to the semifinals of the Boys' Singles tournament at Wimbledon. At 17, he became the youngest male to reach the third round at Wimbledon since Boris Becker. In 2005, when he was just 19 years old, Nadal won the French Open the first time he competed in the tournament, and his world ranking shot to No. 3. Nadal won 11 singles titles that year, eight of which were on clay, and he was soon dubbed the "King of Clay."

Despite enduring shoulder and foot injuries, Nadal won his second straight French Open and added four more titles in 2006. The following year, he won again at Roland Garros and took home five other titles. Nadal poured it on in 2008, winning the French Open again, in addition to winning Wimbledon — where he beat rival Roger Federer in the longest final in Wimbledon history — as well as taking home the gold medal at the Beijing Olympics. After Wimbledon, Nadal's winning streak stood at a career-best 32 matches.

With his powerful topspin-heavy shots, speed and mental toughness, Nadal reigned as one of the "Big Four" of men's tennis (along with Federer, Novak Djokovic and Andy Murray) for the next several years. He took over as the world's No. 1 in 2008 and won his first Australian Open in 2009. In 2010, he was triumphant at the French Open and Wimbledon, and his subsequent win at the U.S. Open made him just the second men's player to achieve the career Golden Slam — victories at all four majors, as well as Olympic gold.

The following year, Nadal led the Spanish Davis Cup team to victory for the fourth time, but he surrendered his No. 1 ranking after losing to Djokovic in the Wimbledon final. He gained some revenge by defeating the Serbian star at Roland Garros the following spring to claim a record seventh French Open singles crown. However, Nadal followed with a surprising second-round loss to Czech player Lukas Rosol at Wimbledon, a match some commentators labeled as one of the biggest upsets in tennis history. Afterward, Nadal announced he was withdrawing from the 2012 Summer Olympics due to knee tendinitis, an injury that knocked him out of action for several months.

In June 2013, Nadal won his eighth French Open title by defeating fellow Spaniard David Ferrer in straight sets. "I never like to compare years, but it's true that this year means something very special for me," Nadal said after the match, in an interview with ESPN. "Five months ago nobody of my team dreamed about one comeback like this because we thought that [was] going to be impossible. But here we are today, and that's really fantastic and incredible."

Later that month at Wimbledon, Nadal lost in straight sets in the first round to Belgium's Steve Darcis. It was a shock to tennis fans who expected a strong performance from the Spanish player, leading to speculation about the state of his health and overall game. But Nadal was back on the upswing by the U.S. Open, where he defeated Djokovic to win his second championship at the tournament. The win helped propel Nadal back to the top spot in the world that October.

In June 2014, Nadal won his ninth French Open championship by topping Djokovic in four sets. It was his 14th Grand Slam title, tying him with Pete Sampras for second all-time behind the 17 won by Federer. However, he withdrew from the 2014 U.S. Open in August, citing a wrist injury, and played a limited schedule for the remainder of the year.

Nadal advanced through the field at the 2015 Australian Open, but his physical capabilities appeared compromised when he fell to hard-hitting Tomas Berdych in the quarterfinals. He then suffered a stunning quarterfinal loss to Djokovic at the French Open, his first defeat at the tournament since 2009 and just the second overall of his career.

After winning the 2015 Mercedes Cup in Germany, Nadal stumbled in a second-round loss to Dustin Brown at Wimbledon. He then fell to Fabio Fognini in the third round of the U.S. Open, snapping his streak of 10 consecutive years with at least one Grand Slam title.

Continued Setbacks and His Comeback

The 2016 season brought more mixed results for the hard-hitting Spaniard. After suffering a first-round loss at the Australian Open in January, he rebounded to win titles in Monte Carlo and Barcelona. However, Nadal's attempts to play through a nagging wrist injury took its toll, and he was forced to pull out of his favorite tournament, the French Open, after two rounds. At the 2016 Olympics in Rio, Nadal took home gold in with Marc Lopez in men's doubles.

In 2017, Nadal faced off against Roger Federer in the finals at the Australian Open but was ultimately defeated in five sets. After his win, Federer, who came back from a series of injuries, paid tribute to Nadal: “I’d like to congratulate Rafa on an amazing comeback, too,” Federer said. “I don’t think either one of us thought we would be in the final at the Australian Open this year. I am happy for you. I would’ve been happy to lose to you tonight, too, really.” 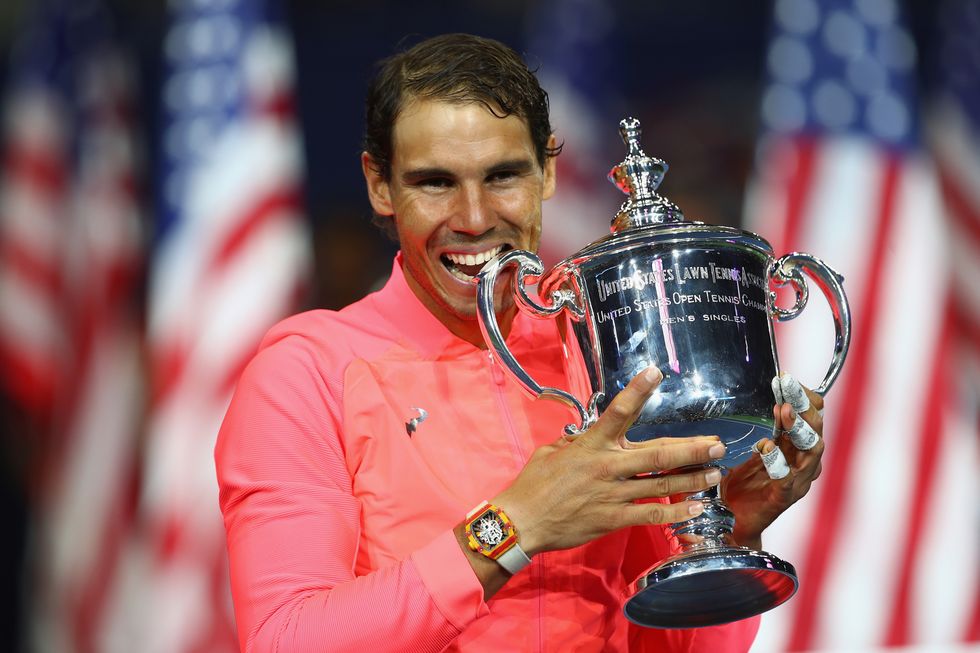 Rafael Nadal bites the championship trophy during the trophy ceremony after the men’s singles finals match of the 2017 US Open on September 10. He defeated Kevin Anderson in the third set with a score of 6-3, 6-3, 6-4.
(Photo: Clive Brunskill/Getty Images)

Nadal rebounded to win the 2017 French Open for a record-setting 10th time, "La Decima" in Spanish. After defeating Stan Wawrinka of Switzerland at Roland Garros, he continued his winning streak at the 2017 U.S. Open. Nadal's victory over Kevin Anderson of South Africa was his 16th Grand Slam title, returning him to the number one ranking. After his U.S. Open win, Nadal spoke of the ups and downs of his comeback. “For me personally, it’s just unbelievable what happened to me this year after a couple of years with some troubles: injuries, moments playing not good,” he said. “From the beginning of the season, it has been very emotional.”

Injuries struck again at the beginning of 2018, forcing Nadal to retire from his quarterfinal match vs. Marin Cilic at the Australian Open, but he returned to top form by the start of the clay-court season, claiming his 400th career win on the surface en route to his 11th career title at the Barcelona Open in April.

The 2018 French Open brought more of the same from its most decorated player, with Nadal making mincemeat of his competition. The final against No. 7 seed Dominic Thiem presented an interesting matchup, as the big-hitting Austrian had defeated Nadal on clay a month earlier, but the Spaniard rolled to a straight-set victory for a remarkable 11th French singles crown and his 17th overall Grand Slam championship.

Nadal advanced to the semifinals of the following two Grand Slams, but was forced from the latter with a knee problem and then underwent ankle surgery in November. He recovered to make a run to the 2019 Australian Open final and then overcame more nagging injuries to reestablish his clay-court dominance that spring, culminating with a four-set win over Thiem for his 12th French Open crown.

At Wimbledon that summer, fans were treated to another Nadal-Federer classic, with the Swiss great winning their semifinal matchup in four sets. But there was no stopping Nadal in New York two months later, as he held off a stubborn Daniil Medvedev in five sets to claim his fourth U.S. Open and 19th career Grand Slam title.

Nadal won his 13th French Open title in 2020 by defeating Djokovic, leaving him tied with Federer for the men's record of 20 Grand Slam singles titles. Nadal was defeated in five sets in the quarterfinal of the 2021 Australian Open by Stefanos Tsitsipas, ending his bid for a record 21st Grand Slam men's singles championship.

In June 2022, Nadal won his 14th French Open in Paris, cementing his 22nd Grand Slam title and placing him two wins above Djokovic and Roger Federer, who both have 20 Grand Slam titles, respectively.

Nadal has been dating his girlfriend Xisca Perello since 2005 and revealed that they became engaged in January 2019. She serves on the RafaNadal Foundation as a project director.