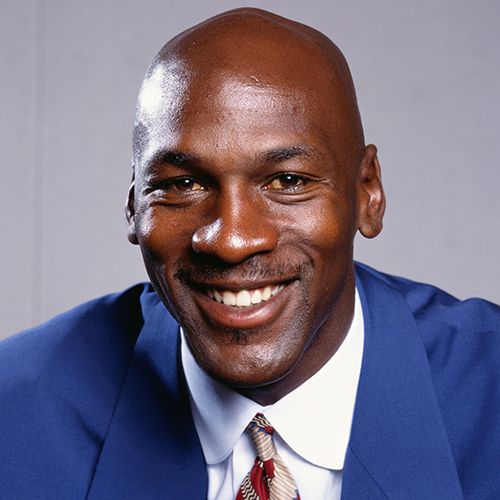 Who Is Michael Jordan?

Michael Jordan is a former professional American basketball player, Olympic athlete, businessperson and actor. Considered one of the best basketball players ever, he dominated the sport from the mid-1980s to the late 1990s.

Michael Jeffrey Jordan was born on February 17, 1963, in Brooklyn, New York. Growing up in Wilmington, North Carolina, Jordan developed a competitive edge at an early age. He wanted to win every game he played.

Jordan grew up with a stable family life. His mother, Delores, was a bank teller who has since written several books. His father, James, was a maintenance worker turned manager at General Electric. Jordan had four siblings: Larry, Deloris, Roslyn and James Jr.

Jordan's father, James, introduced him to baseball and built a basketball court in their backyard. James was murdered in the summer of 1993 when two teenagers shot him in his car in an apparent robbery as he was driving from Charlotte to Wilmington, North Carolina. He went missing for 11 days until his body was found in a swamp in McColl, South Carolina. The teens were later tried and convicted of the crime and received life sentences for first-degree murder.

Jordan enrolled at the University of North Carolina at Chapel Hill in 1981 and soon became an important member of the school's basketball team. UNC won the NCAA Division I championship in 1982, with Jordan scoring the final basket needed to defeat Georgetown University. He was also singled out as the NCAA College Player of the Year in 1983 and in 1984.

Jordan left college after his junior year to join the NBA in 1984. In 1985, Jordan finished his bachelor's degree in geography as he continued to play basketball professionally.

Jordan began his professional basketball career when he was drafted by the Chicago Bulls in 1984. He was the third overall pick, behind Hakeem Olajuwon, who was selected first by the Houston Rockets, and Sam Bowie, taken by the Portland Trail Blazers; the draft also featured legendary players John Stockton and Charles Barkley.

Jordan soon proved himself on the court. He helped the team make the playoffs and scored an average of 28.2 points per game that season. For his efforts, Jordan received the NBA Rookie of the Year Award and was selected for the All-Star Game.

While his second season was marred by injury, he was breaking new ground on the court during the 1986-87 season. He became the first player since Wilt Chamberlain to score more than 3,000 points in a single season.

By the late 1980s, the Chicago Bulls were quickly becoming a force to be reckoned with, and Jordan was an instrumental part of the team's success.

The Bulls made it to the Eastern Conference Finals in 1990 and won their first NBA championship the following year by defeating the Los Angeles Lakers. Jordan was well known by then for his superior athleticism on the court and for his leadership abilities.

In 1992, the Chicago Bulls beat the Portland Trail Blazers to win their second NBA championship. The team took their third championship the following year, dominating in the basketball world.

Following a short stint in minor league baseball, in March 1995 Jordan returned to the basketball court for the Chicago Bulls. He came back even stronger the following year, averaging 30.4 points per game to lead the Bulls to a then-record 72 regular-season wins before they defeated the Seattle SuperSonics for the NBA championship.

Chicago nearly matched the previous year's record with 69 wins in 1996-97, a season that ended with a game six win over the Utah Jazz in the NBA Finals. The two teams faced each other again for the championship in 1998, with Jordan sinking the winning shot in Game 6 to claim his sixth NBA title.

After his second retirement from basketball in 1999, Jordan joined the Washington Wizards in 2000 as a part owner and as president of basketball operations.

In the fall of 2001, Jordan relinquished these roles to return to the court once more. He played for the Wizards for two seasons before retiring for good in 2003.

During the summer of 1984, Jordan made his first appearance at the Olympic Games as a member of the U.S. Olympic basketball team. The team won the gold at the games that year, which were held in Los Angeles.

Over the 19 years since beginning his professional basketball career, Jordan retired from the sport three times. He first retired in 1993 and again in 1998, then finally hung up his jersey for good in 2003.

In a move that shocked many, after the end of the 1992-93 basketball season, Jordan announced his retirement from basketball to pursue baseball. For one year, in 1994, Jordan played for a minor league team, the Birmingham Barons, as an outfielder.

This decision came shortly following the murder of Jordan's father, who always wanted him to play baseball. He had last played baseball as a high school senior, in 1981.

"You tell me I can't do something, and I'm going to do it," Jordan said.

During his short career in baseball, which many fans considered a whim, Jordan had a rather dismal .202 batting average. However many of the people who worked with him at the time said he was an extremely dedicated player with potential.

"He had it all. Ability, aptitude, work ethic. He was always so respectful of what we were doing and considerate of his teammates. Granted, he had a lot to learn," said former Barons manager Terry Francona. "I do think with another 1,000 at-bats, he would've made it. But there's something else that people miss about that season. Baseball wasn't the only thing he picked up. I truly believe that he rediscovered himself, his joy for competition. We made him want to play basketball again."

After his season with the Barons, Jordan went to the Arizona Fall League to play for the Scottsdale Scorpions. After hitting .252 and naming himself the team's "worst player," he returned to the NBA in March 1995 with a two-word press release: "I'm back."

Outside of his career in basketball, Jordan has been involved in a number of profitable business and commercial ventures. Between his profitable Nike partnership and his ownership of the Charlotte Hornets, Forbes estimated Jordan's net worth to be over $1 billion in 2018.

Jordan signed his first deal with Nike in 1984, and he currently serves on the Nike Inc. board of directors.

The Air Jordan quickly proved very popular, and it continues to be a best-seller for the apparel maker more than 30 years later. The collaboration mints money for Nike and Jordan, with Nike reporting nearly $2.9 billion in revenue for the Air Jordan line in 2018.

Over the years, Jordan has signed a number of other endorsement deals with brands including Hanes, Upper Deck, Gatorade, Coca-Cola, McDonald's, Chevrolet and Wheaties.

Jordan made a big splash in film as the star of the 1996 movie Space Jam. The film mixed live action and animation and paired Jordan with cartoon legends Bugs Bunny and Daffy Duck on screen. 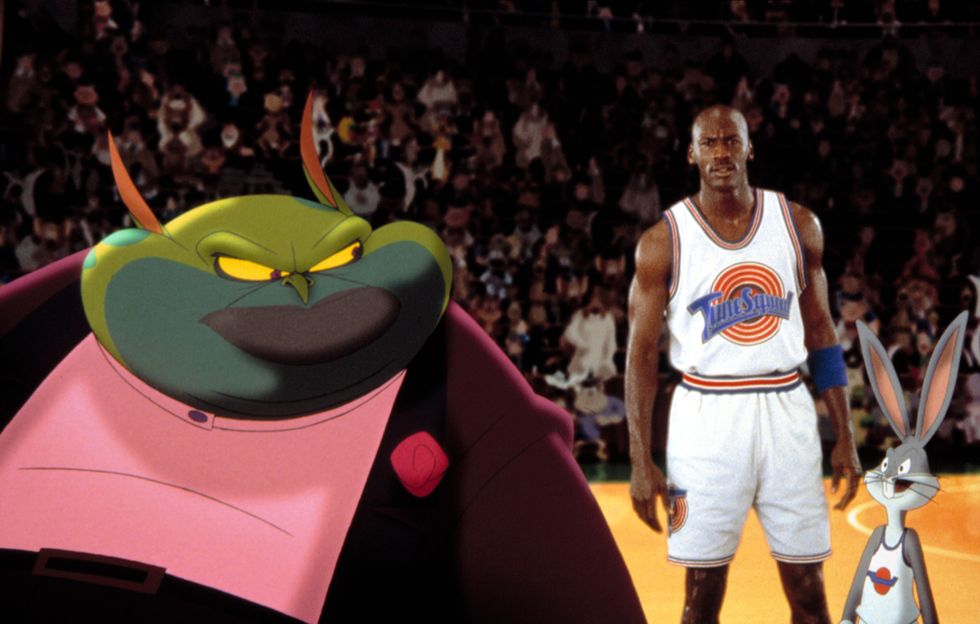 Part Owner of the Charlotte Hornets

Improving the team's less-than-stellar record seemed to be Jordan's priority. He told ESPN in November 2012 that "I don't anticipate getting out of this business. My competitive nature is I want to succeed. It's always been said that when I can't find a way to do anything, I will find a way to do it." While the Hornets' on-court record isn't hugely successful, the organization has grown from a $175 million valuation in 2006 to $1.05 billion in 2018.

In 1998, Jordan launched into the restaurant business as the owner of Michael Jordan’s The Steak House N.Y.C. Designed to reflect Jordan’s tastes and style, this typical steakhouse seated 150 and 60 at the bar, occupying 7,000 square feet in Grand Central Terminal, before closing in late 2018. Jordan also opened restaurants in Chicago, at the Mohegan Sun casino in Uncasville, Connecticut, and at the Ilani Casino Resort in Ridgefield, Washington.

In April 2009, Jordan received one of basketball's greatest honors: He was inducted into the Naismith Memorial Basketball Hall of Fame. Attending the induction ceremony was a bittersweet affair for Jordan because being at the event meant "your basketball career is completely over," he explained.

In 2016, Jordan was presented with the Presidential Medal of Freedom by President Barack Obama.

In 1989, Jordan married Juanita Vanoy. The couple had three children together: Jeffrey, Marcus and Jasmine. After 17 years of marriage, they divorced in December 2006.

Jordan and Juanita's two sons, Jeffrey and Marcus, both played basketball in college and had dreams of making it to the NBA.

Jeffrey joined the basketball team at the University of Illinois in 2007. Both Jordan and his ex-wife Juanita supported their son and tried to help him deal with playing in the shadow of an NBA legend.

"The thing that we have tried to tell Jeff is that you set your own expectations. By no means in this world can you ever live up to someone else's expectations of who you are," Jordan said during an appearance on the Today show.

Jordan's younger son Marcus also played basketball for the UCF Knights, for three seasons from 2009 to 2012. He went on to open a basketball shoe and apparel store in Florida.

"They wanted to be like their dad. What boy doesn't? But they both got to a point where they said, 'We're not going to the NBA'," said Juanita in 2013.

After the 2019-20 NBA season was halted by the coronavirus pandemic, ESPN's spring 2020 airing of The Last Dance, a 10-part documentary about the Jordan-led 1997-98 Bulls, became must-watch viewing for basketball fans. Along with featuring archival footage of Jordan and interviews with teammates and opponents, The Last Dance explored the tension between the Bulls' front office and its peerless superstar over his final triumphant year with the team.